YouTube operations notes, is the external channel useful? The external drain should do so

The tringe is small

This is a public number that provides learning to communicate together. Xiaosheng insists on sharing youTube operations' money-making strategy notes and case studies. Pay attention to the public number and join the pipeline students learning group, we exchange, support each other, common progress. If you want to learn about YouTube operations, follow the pipeline students. 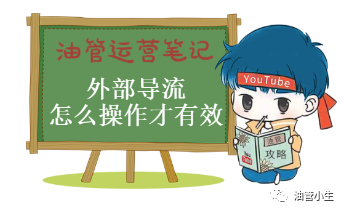 There was a little quarrel in the three groups yesterday, which was not very big but very meaningful.Here's the thing, there's a group friend A who shoots vlogs uploading their work to the pipeline.She then retweeted his video to the group for everyone to watch (Xiaosheng didn't prohibit or even encourage friends in the group to share more of his channel content into the group).Then, there is another group friend B kindly come out to remind, B feel that this to the channel pull traffic efficiency is relatively low, suggest A do not do so, focus more on content. 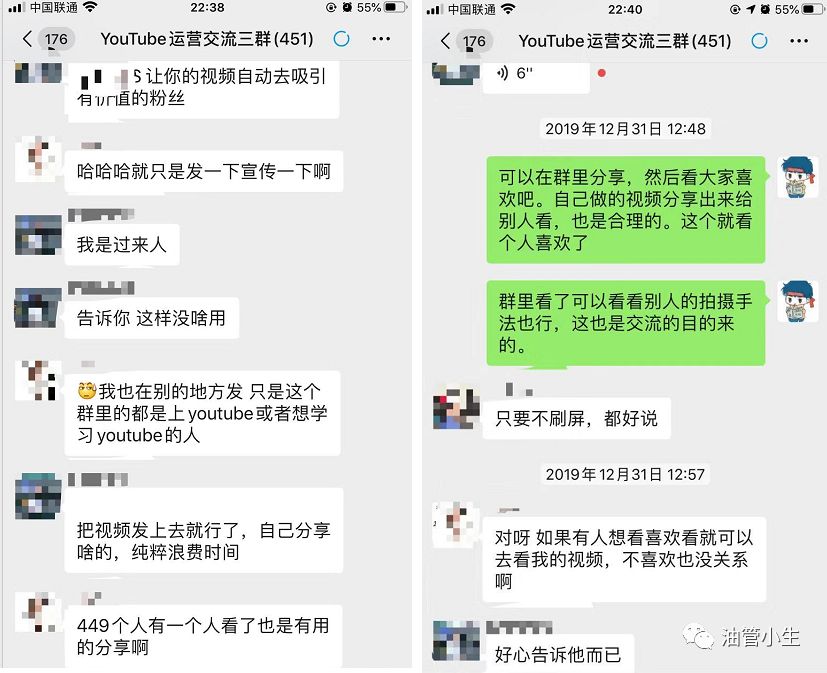 In this disagreement, leaving aside the others, this incident raises an issue that may be of great concern to all:Is it useful to drain the outside of the tringe?

Whether the external drain of the tringe is useful or not

Xiaosheng's answer:Burst gravity can increase the playback of individual videos, and even when revenue has begun to be earned, you can increase advertising revenue.However, if the length of video playback (within the first 10 seconds), then the recommendation algorithm for the promotion platform will not help, but will be counterproductive.

The above answer is a bit of a round-the-top.Xiaosheng will read it in detail next

Second, if the purpose of the conductivity is to get the platform's recommendation, increase the flow pool.Then be careful with external drains.Xiaosheng has mentioned in many previous articles that the pipeline platform is determined by the length of video playback, the integrity rate and the click-through rate in the traffic pool.

In the past, the number of playbacks is very large, but later optimized the algorithm, now the playback time, integrity is the most important indicator.So, if blind external drains are not audience targets, basically neither indicator will be very bad.Therefore, it won't help to expand the traffic pool, and may even be counterproductive.

The algorithm basis of the conclusion of small birth conductivity

Xiaosheng had previously found such a passage in a foreign Youutuber book.Here's the picture 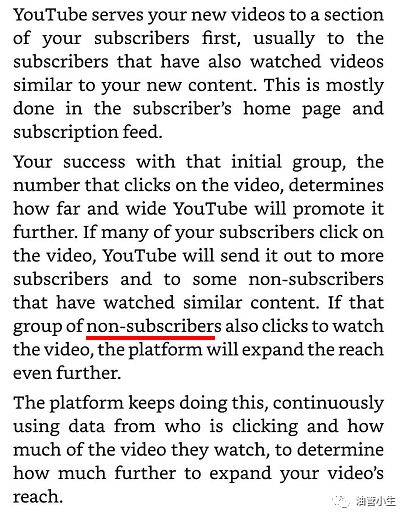 Therefore, if the external drain, first of all, the data of this drain is not in his test group, so this part of the data will not have a direct impact.But the amount of viewing data that comes here still gives the platform a way to judge the merits of your video.

Xiaosheng dares to say so, not just because there is an algorithmic basis.I've seen and participated in an experiment before.The experiment was this, with 10 consecutive video external channels for the new channel, each with a conductivity of more than 100,000.But these quantities are burst conductivity, the viewing time is not long, basically look at the first 15 seconds.

My experiment concluded that it made sense for the real number of times the video was played, how long it was played, and even the ad revenue.However, there is no help with the platform's recommendation of video.

How to correct the external conductivity

Understand the above conclusions, principles.We can still try targeted, conductive.For example, we are most commonly, in their own related content on the FB-INS to share, because these fans' attributes, needs are consistent, when through external sharing, enhance exposure objects are accurate.Such a conductivity can bring a clear effect to the video data, speed up the weight of the video, into a larger traffic pool.

Xiaosheng encouraged everyone to share their channels in the group, the idea is to share after, because the group is all self-media are pipeline authors.Then you can look at other people's videos from a learning and discussion point of view, analyze other content ideas, shooting techniques, etc. , such a video meaning is meaningful to the audience.

Whether it'sViolence.The defleter or the fine stream (real amount non-robot brush), the number of video playback, playback time, advertising revenue will be improved. So, if your channel needs to increase the playback time quickly, the effect of the guide is very meaningful.ButViolence.Conductivity does not help with platform recommendations for video and increasing channel weighting, and may even be counterproductive.

The more correct approach is to run their own channels at the same time, the training of the corresponding content of the FB-INS. When one of your own videos is recommended by the platform, you can try to introduce a larger amount from outside to contribute to the effect.

The above is to study hard from the media YouTube operation of the "pipeline students" about "YouTube external channeling is not useful?"External drains should do this" study notes, and I hope this issue of note sharing will help you.

If you like my content or want to make money on YouTube and want to ask other questions about How YouTube operates, then please add me or leave a message at the bottom of the article.Contact me to join the YouTube Operations Strategy Multiplayer Learning Group!

YouTube operations notes, is the external channel useful? The external drain should do so
Up to 200 words, currently totalWord.

How do I cash in via short video? Advertising, selling goods, content paying... There's always one for you
Source Noon News . . One million dollars! Wang Laoji and Gadobo's ad infringement case is over; original YouTube videos released after September 24 will be free for everyone
Why is the Teen San guozhi 2 ad so hot?
Google Advertising Solutions (Text Edition)
Facebook wants to be the next video advertising giant, replacing YouTube with $70 billion in TV ads