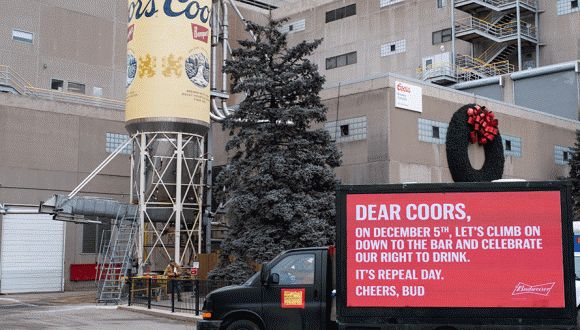 At first glance, it may seem provocative - there are Berwick beer advertising cars at the doorsteps of breweries such as Heineson, Coors and Sam Adams in the US these days.

At Heineken's door, for example, a giant red billboard on a Berwick ad truck reads: "Dear Heineken, let your Heineken go to the bar for a drink on December 5th." After all, this is the anniversary of the abolition of the prohibition of alcohol. Love your Berwick. "It's similar at the door of other beer companies.

This is actually a marketing campaign by Berwick for the anniversary of the US ban. Putting billboards at the door of competitors is like lifting a bar, but the contents of the billboards are actually calling on wine merchants to celebrate today in history, with a lot of hope of a truce. This not-so-expensive offline billboard marketing makes the brand image a bit naughty and vivid.

The context of this marketing is related to the era of alcohol prohibition in the United States about 100 years ago. Since 1920, the United States has introduced a nationwide ban on the brewing, transportation and sale of alcoholic beverages. The decree largely frustrated the big brewers of the day, including Anheuser Busch, Berwick's predecessor.

The Act lasted for 13 years and was not formally repealed until 5 December 1933. For the Bushes, the repeal of the ban was an opportunity to get Best Buy back to the top of the nation's sales, and it was mentioned in "Bitter Brewing" that the Bushes began re-purchasing raw materials and improving transportation and brewing equipment more than a year before the ban was repealed.

So a day on December 5th is crucial for Best Brewing. "The 13 years of the ban have made it no longer possible for beer drinkers to get access to good American beer through formal channels," Monica Rustgi, Vice President of Brewing, told Adweek. "

This year, Berwick put the celebratory ad on the doorsteps of rival companies and called on consumers to leave work early on December 5th and have a beer together at 5:32 a.m. This is exactly the exact time when the ban was abolished in 1933.

And competitors "lift the bar" marketing method was originally a great topic manufacturing machine - on the one hand, this topical marketing can attract consumer curiosity and "eat melon" desire, on the other hand, it is also the way to personalize the brand, this kind of prank marketing makes the brand image become real three-dimensional, more easily close to the psychological distance between consumers.

Fast food chain Burger King is probably one of the world's favorite brands to market its competitors. Burger King and McDonald's have been happy friends in food and beverage marketing, and their advertising war against the other has been on the fore since the 1960s. The two, for example, often lift bars on billboards, which are easier to reach than their restaurants; Burger King used to dress up as McDonald's ghosts in its own stores on Halloween.

A few days ago, Burger King went on a frenzy to "get business" from McDonald's stores: to promote its own app, they said they only needed 1 cent to order a Burger King app within 600 feet of 14,000 McDonald's restaurants across the United States.

Samsung and Apple are also often in love in the marketing of a pair (Samsung actively touch porcelain situation is the majority), after Samsung's ads often satirical Apple - mobile phone too card, often no electricity, and Apple often 怼 back, before launching five short films in one breath called on users to leave Android to switch to Apple, the selling point is that Apple's music texture is better, convenient photo finishing, more confidential.

Why did Berwick put the billboards on the doorstep of a competitor's company?
Up to 200 words, currently totalWord.

Looks like no competitors? Evergrande built cars in the end is a car or advertising
Hengrui Pharmaceuticals' new drug promotion has been accused of violating advertising laws, and rival Qilu Pharmaceuticals wants to fight Bo Gongtang
The advertisement should also be well designed How to properly spit out competitors
The biggest enemy, not competitors, not too high price, no it, everything is negative: production equals negative, marketing equals negative, advertising and brand equal negative, revenue and reputation equal negative!
Snapchat, an overseas rival, sold 31 million ads in Australia last year