In.InstagramLong video of the new pushApp IGTVBrands, celebrities and publishers are becoming more and more eccentric.

Like whatNetflixPlease starColeSprouseI took one1Video of hours of eating cheeseburgers. From.100Tens of thousands of views and6500With multiple comments, most people love the video. And.Instagramon only a few minutes long video is different,IGTVAllow publishers to publish for up to1hours of video. 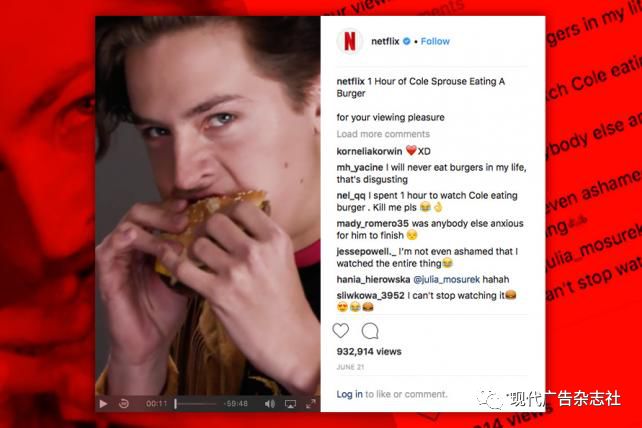 Research companyGartner L2Head of the information intelligence teamMike GroggattSaid“IGTVAllow brands to experiment to see what resonates best with users. The results show that content that resonates with users is a bit strange in a way, but it's a bit similar to some of the brand's features.”

IGTV was only recently launched, but it's already home to a group of publishers who want to get users' attention with long videos. Although.FacebookTV streaming platformWatchIt hardly attracts users to watch videos continuously, but there are signsInstagramPerhaps this can be done. In recent times,InstagramThe number of monthly users exceeds10BillionStoriesThe success seems to indicate that vertical video has an appetite for the user.

Social media video analytics companyDelmondoChief executive.Nick Cicerothey said they found that some core users would be in because of long videoInstagramStay on the platform longer. There is data showing thatInstagram StoriesDaily user volume can be reached4this is also evidence of the high demand for vertical video.CiceroSaid"When people interact with vertical video, a long stay allows them to consume a lot of media content."

Apart from.NetflixFor a burger video, let's take a look againIGTVWhat's interesting about it:

BuzzFeedIn.IGTVA video of a hamster football match was posted. Hamsters hover near the goal line but rarely score goals, and this compulsive entertainment is an absolute torture for most people, but people prefer to watch it.

But.A&WThis video is short and does not have a vertical playback format.CiceroSaid“IGTVshould be in a vertical format, focusing on what consumers care about. Brands shouldn't broadcast horizontal-format video on a platform that mainly has vertical video, which is the opposite of what the platform was originally designed to do, breaking the user's natural viewing habits.”

John MayerIn.IGTVThe video shows an ordinary man showing his new songNew LightBehind the creative process. The video itself is not so strange, the opposite is trueNew LightMusic videos,80The surreal style of the years has attracted many netizens to imitate it.

National Geographic magazine is inIGTVOn air was a team calledOneStrange Rockprogram, the length of time45minutes, telling the story of many miracles that have taken place on Earth. The program of the same name was also broadcast on television, but National Geographic re-recorded the show so it could be inIGTVplayed in a vertical format. The video was posted24within hours360000Second view, as of the manuscript has been130Million views (video at6released on the platform in the month).

Instagram IGTV ads are getting longer and weirder
Up to 200 words, currently totalWord.

Overseas delivery theory: Take excellent Instagram streaming ads as an example to analyze the ways to promote the rapid growth of ROl
The Kardashians received a letter of condemnation for posting too many ads on Instagram
Instagram will share the proceeds with creators for the first time: IGTV ads, Instagram Live badges
Global ad delivery: AFK Arena dominates Top1, Instagram's game advertiser of the year
Open-minded Escape from Instagram: A new advertising strategy in the digital age