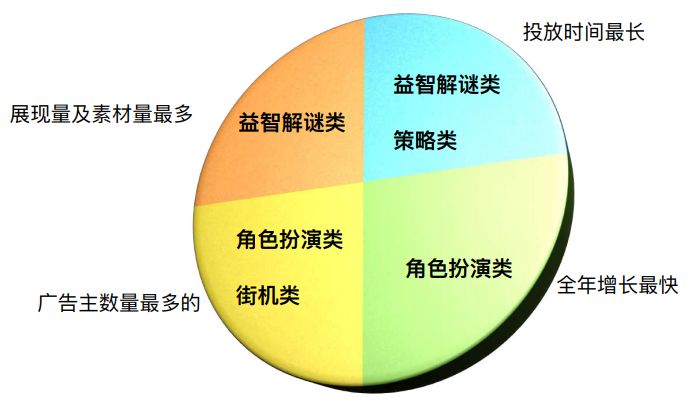 Based on the total display estimate of each game type and the proportion of material in each region of the world in 2019, it can be found that the puzzle solving category is the most important, with 20% of the display estimated and 18% of the material.The arcade class followed closely behind,The analog class has the least delivery, with only 5% for both.

Judging from the trend of the presentation estimates for each game type as a percentage of the total presentation estimates,The role-playing class peaked twice in May and July, at more than 20%,Faster growth;Puzzle solving was high and stable throughout the year, peaking at nearly 25% in November.

Compare the number of advertisers and delivery times for different game types.Role-playing advertisers accounted for the largest number, accounting for 29%,But ad time was only 4th, at 12%.

Puzzle puzzle classThe number of advertisers is only 12%, but it isLongest delivery time, 33%,It can be seen that puzzle game advertisers have high frequency of material updates and strong delivery.

AppLovin channels are the most popular casual games, and AFK Arena is Instagram's top1 advertiser of the year

Based on ad presentation estimates,In the Facebook channel, all types of games are available in all types of games, role-playing class, strategy class, puzzle solving class ranked in the top 3, accounting for 15%, 14%, 12%, respectively.

In the country,The United States leads by 79 billionThe rest of the world is not much different, with 50 billion in the UK and 47 billion in Canada.All but Indonesia are developed countries.

Goole Adwords channelAccording to the advertising display estimates, leisure games are relatively large, with puzzle solving accounting for 21%.The country can be divided into two echelonsThe first tier is the United States, Malaysia, Canada, Australia and the United Kingdom, with more than $60 billion in data.

The AppLovin channel is the most popular for casual gamesAccording to the advertising display estimates, leisure games accounted for most of the mountains, arcade and puzzle solving categories accounted for 25% and 23%, respectively. 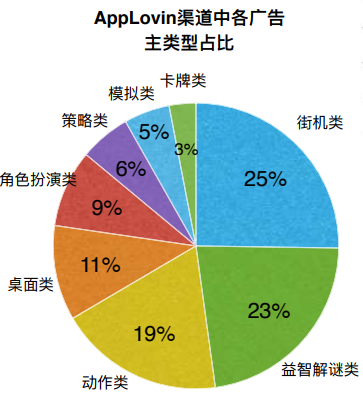 Instagram Channel, TOP Products/Advertisers of 2019, Lilith's AFK Arena and Awakening of The Nation are on the list.AFK Arena is an Advertiser for Instagram's game of the year TOP1. 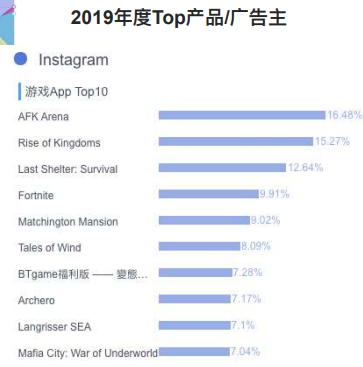 Android has the most role-playing classes, with 56% of video footage

Based on the percentage of games played worldwide in iOS and Android for 2019,Puzzle solving and arcades account for more of the iOS system, and role-playing and policy classes are more popular in Android.

It can be found that in 2019, both iOS and Android, video is the most valued form of footage, playable advertising compared to last year's proportion increased.

Instagram's new feature will expand your ad audience
Is Instagram naturally plummeting and ad space saturated?
Disclosure: The best time for Instagram brand ads to be published
Don't like ads? See how Instagram and Snapchat create addictive ads
In 2019, the number of red ads on Instagram has exceeded 3 million grassroots net red accounted for 90%.