How does the Facebook ad group stabilize its expansion?

Facebook ads are like a nutritional supply chain, and a problem with one link can lead to a result that doesn't go as expected.

Many new Facebook-related friends often run into the problem of keeping roI (or ROAS) stable by spending $20 to $100 a day on Facebook during the testing phase, but as soon as you increase your ad budget, whether it's your ad group budget or your campaign budget, your ad performance drops.

To successfully transition your $50-a-day ad spend to $500, here are some tips for effectively expanding Facebook's advertising budget.

First, how do you assess whether your campaign is suitable for more conversions by increasing your budget?

We can determine how often we view ad campaigns at Facebook Ads Manager: set the reporting period to the last 30 days, select The Run report, and then see how often each ad campaign is viewed.

1, the frequency is higher than 6 points - indicating that advertisers should not invest more money in this advertising campaign, because even if they invest more money, they will only touch the same person multiple times

2, if the frequency is less than 3 points - indicating that advertisers still have room to adjust the campaign budget

Frequency between 3, 3 and 6 points - indicates that advertisers may get more customers as they add extra budgets, but CPR may be slightly higher

2. If your campaign is already frequent, you should consider other strategies

For example, expand your target audience or add new creatives to your ad collection. But if your campaigns are less frequent and you want to get more customers by expanding your budget, the following four-point approach will help you.

A small budget increase of 10-20% for Facebook ads every 4-7 days tends to yield better results. However, to use this strategy, you first need to make sure that this Facebook campaign is profitable.

Why does this method have better results?

Because each ad group learns from its performance and retains data. When you increase your budget by 10%-20%, this is considered a relatively small change to your ad group, so the ad group retains most of the data and lessons learned from the initial stages of running the campaign. This helps keep your performance relatively stable compared to the larger changes that force your ad group to lose all initial data.

2, expand the size of the audience

By expanding your ad budget to more than $50 a day, the first step is to rethink the size of the audience you're targeting. From small, tightly selected audiences to larger, broader audiences, your Facebook Pixel will offer more opportunities to find new customers.

If you have a precise audience, using lookalike Audiences for Facebook ads to find people similar to existing ones and expand your audience is one of the best ways to find new customers on Facebook.

If you have a customer list and upload an audience that matches successfully enough (typically 1,000 samples and more), a 1% lookalike audience based on the customer list is an effective way.

If your ad takes longer to run, you'll experience audience fatigue: your ad performance slows down, when most audiences have seen your ad and no longer feel fresh;

While 1% of similar audiences include some of your best potential customers, reaching 3% to 5% of your audience will expand your budget without making your audience tired. If successful among 1% of lookalike audiences, Facebook Pixel accumulates a certain amount of valuable data that Facebook algorithms can use to find larger audiences and more likely customers, from individuals to ensure the follow-up to ad delivery.

The above content mentions that the frequency of ads is higher than 6 points, indicating that the target audience has seen your ad many times. Therefore, increasing the budget for the campaign will mean that the same person will see more of the same ads, which will only increase customer disgust.

At this point, we can quickly expand our target audience by adding more relevant interests to the Detailed Targeting section.

What is a good interest-based audience size?

It is not recommended to shrink it too much. Although Custom and Similar audiences are small, a small interest-based audience can hurt the learning phase of your ad group. It is therefore recommended that the interest-based target audience be kept between more than 20,000 people.

Finally, the following three or four campaigns can be segmented for the lookalike audiences mentioned above:

In each campaign, use CBO to set a budget, and then turn off ad groups or ads that don't perform well.

By using Facebook automated rules, you can create a custom rule that automatically increases your budget by x% when an ad group meets certain criteria.

For example, you can set the following rules:

In the past 3 days, if and ad groups have below a certain amount per conversion fee

then increase your ad group budget by 20%

Run automation once a week 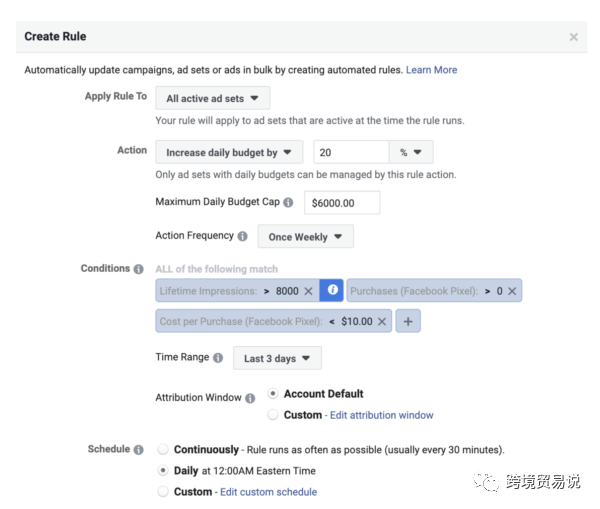 For example, if you pay more than $20 per search result, you can tell Facebook to reduce its ad group budget by 20%.

In the following example settings, if an ad group spends only two or fewer purchases and spends more than $100, the daily budget for the ad set is reduced by 25% (check once a day). 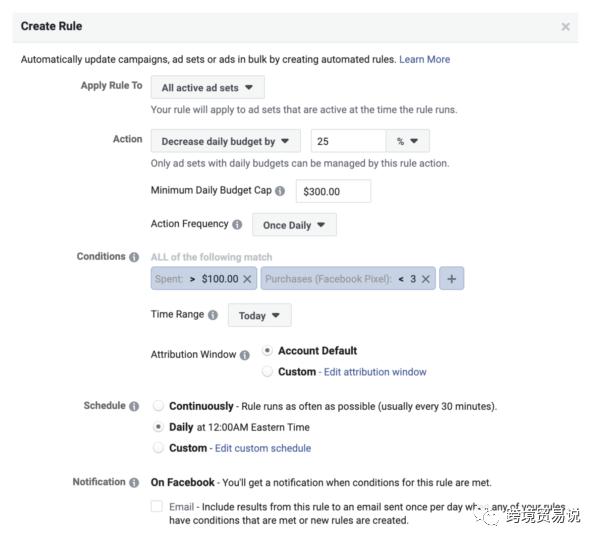 How does the Facebook ad group stabilize its expansion?
Up to 200 words, currently totalWord.