Facebook's "Auto-Close Ads" feature available online, and the PMD platform has been hit

Recently, Power Edictor, Facebook's ad manager, introduced a new feature called Auto-Execute Rules to make it easy for advertisers to control ad delivery without having to check the performance of campaigns, ad groups, and ads every day. By automating rules, advertisers can receive email alerts when ads meet certain pre-created conditions, or have them turn off automatically.

Below, AdSeeData will take you to learn more about this new feature.

1. What do you do to automate the rule?Considering the commonality of metrics and metrics for each ad, the new feature supports simultaneous settings for a single ad or multiple ad groups and campaigns, so determine which ads need to be created before creating rules, and then select the type of action for the rules: 1. Email alerts, 2. Auto-close ads.

Take the example of creating an automatically closed ad rule: Select the corresponding rule criteria for different types of ads. eg. Your ads are billed as CPM, you can choose a thousand impressions (CPM) and greater than, add the value of $0.50, then your rule is: CPM $0.50, when this condition is met, the system will automatically turn off the ads.

Also, note that the addition of the following yellow box twists, you can create new conditions on top of the created conditions, and when you create multiple conditions, the rule requirements are met only if all the conditions set are met.

In addition, the rules have certain requirements for valid advertising data, and the rules can only take effect if the basic values are reached. For example, if your rule is labeled CPA, there must be at least 15 valid results before the rule can take action. Or your rule is measured by the cost of exposure per ad, and it will take at least 5,000 exposures before it takes effect. 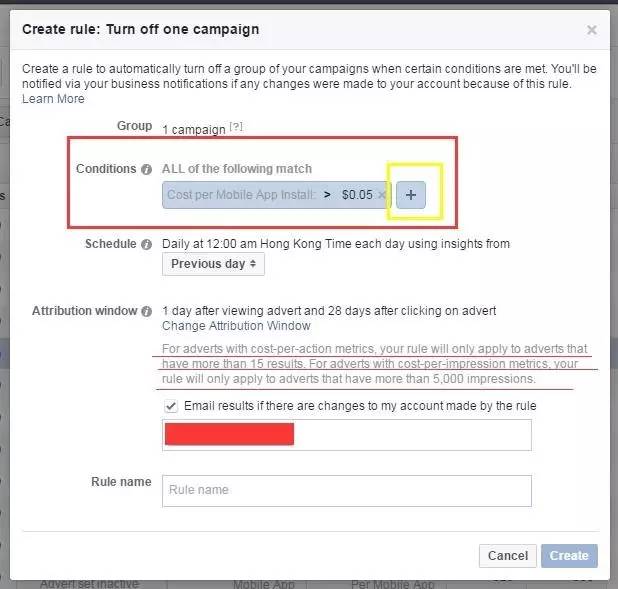 3. What are the conditions for creating a rule for different types of ads, and the rule conditions are and only the following options are available:

Cost per application installation:The average cost of installing an app for running ads.

Single effectiveness costs:The average fee you pay for each action related to your ad goals.

Effectiveness:The number of actions that result from ad serving. The results shown here are based on your ad goals.

Cost of a single conversion for potential customers (Facebook pixels):The average cost of a lead conversion tracked by your site's Facebook pixel after people view or click on your ad.

Add payment information for a single fee (Facebook pixel):The average cost of a single payment message tracked by your site's Facebook pixel after people view or click on your ad.

Frequency:The average number of times an ad was shown to each user.

Impressions:The number of times the ad was th run. In mobile apps, ads are counted as one run the first time they are viewed by a user. In all other Facebook interfaces, ads are seen as running once for the first time in a user's News Feed or each time they appear in the right column.

Total cost:The total amount you have spent so far.

Thousands of presentation fees (CPM):The average cost of your ad when you have 1000 impressions.

Cost per day:The total amount that you spent that day.

4. The number of rules created

Up to 100 rules can be created per ad account. This limitation includes triggered and unexe triggered rules. Each rule can be associated with 200 objects. For example, you can apply a single rule to 200 campaigns or 200 ad groups. Each condition cannot be added repeatedly to a single rule.

5. The impact of automated enforcement rules on PMDs and advertisers

According to AdSeeData's survey feedback on the use of the new feature, the ability to automate rules is relatively simple at the moment, and is not very useful for small advertisers, but the development of this feature has had a fatal impact on the PMD (Preferred Marketing Developers), which serves many advertisers.

PmD has long attracted advertisers who want to do something on Facebook and learn more about Facebook's features, and the "auto-off ad" feature is the core value of the PMD platform, and now that Facebook has introduced automated enforcement rules that are equally demanding, it is expected that the development of new features on the PMD platform will accelerate the process, which will speed up the process for Facebook advertisers. It's a good thing.

Facebook's "Auto-Close Ads" feature available online, and the PMD platform has been hit
Up to 200 words, currently totalWord.