Beijing Business Daily A newspaper on China and globalization; A newspaper for business and a new life; A newspaper that teaches you how to make money and spend it; A newspaper about wealth and knowledge.

The public number of a Porsche, which was valued in an advertisement, was written off today.

Today, "Mimimon" and "Young People with Limited Talents" public numbers all show that they have been cancelled, and the small editor clicks to show that "the account has been independently cancelled and discontinued". Although it has long been spitting poison chicken soup, making up stories, but Mimimon has not stopped using poisonous chicken soup to make money footsteps, until recently with a "death from a cold door" will be completely into the abyss.

Described is a cold-blooded yuan, undergraduate chose accounting major, after graduation continue to work to earn money to subsidize the family, and eventually died of illness. But because of the large amount of fiction, which led to accusations against Mimimon.

It comes at a time when the negative effects of the follow-up to "Death of a Cold-born Meta" are still fermenting. On January 31st, Jiangsu Net Police named Mimimon on Weibo: "To Mimi Meng - for you, patriotism is just a 'business'." 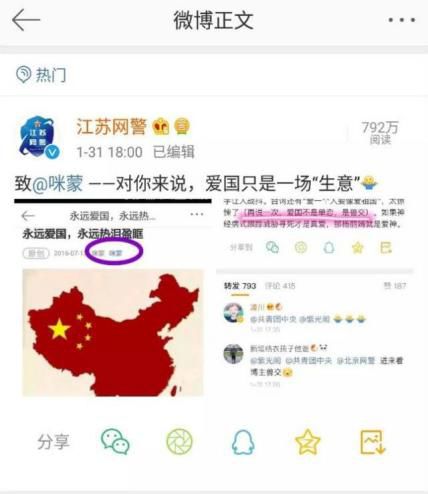 In early February, Mimimon posted a "letter of apology" on Weibo, and said that from February 1st, WeChat public number suspended for more than two months, Weibo permanently shut down, a comprehensive reflection, positive adjustment, to provide you with more valuable content.

But after the apology letter was sent, people didn't buy it.

The people's daily's official microblog said that Mimi Meng sent an apology letter, avoiding the truth on the virtual, avoiding weight on the light, exposing the consistent thinking of the edge ball. When the word businessman is right, but can not cook toxic chicken soup; either chicken blood or dog blood, enthusiasm for spiritual marketing, manipulation of popular sentiment, especially contemptible. If you do not anchor the value coordinates of health, apology is a temporary shelter, "to assume the corresponding social responsibility" will become a chicken hair. 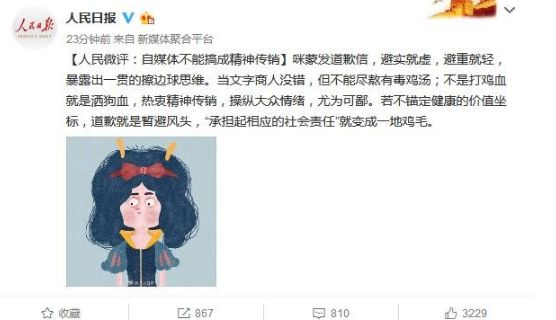 Today, after shuting down Weibo, the "Mimimon" public number has also been cancelled, showing that "the account has been independently cancelled and discontinued." By the time it was cancelled, the account had sent out 238 original articles.

In addition to the public numbers that were voluntarily written off by himself, Mimi came under resistance from the platform.

At present, today's headlines and Phoenix.com have issued a statement to shut down the platform's Mimimon account, Mimimon's accounts on other platforms are also being blocked. 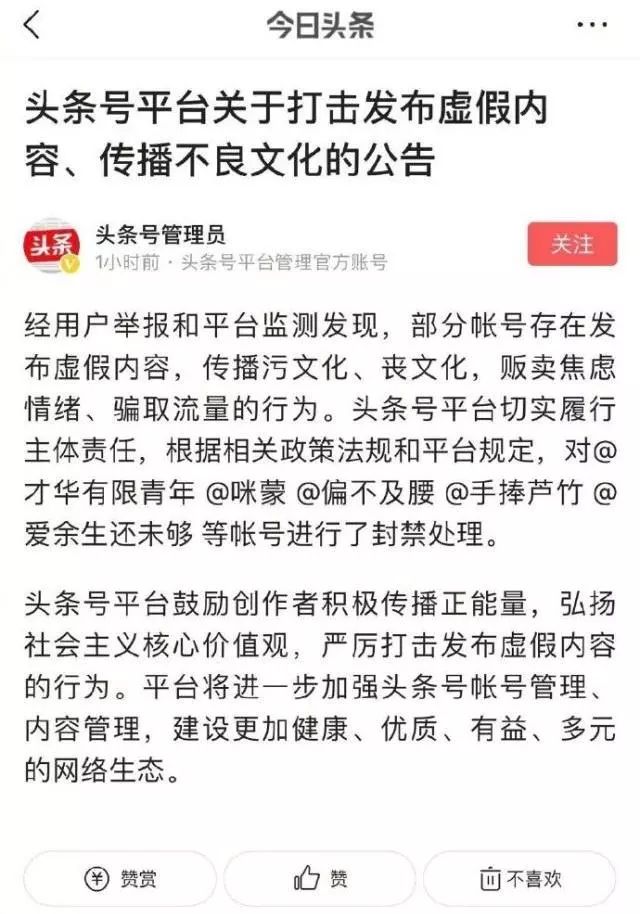 According to public information, in addition to "Mimimon" and "talent limited youth", Mimimon also has the male "Li LiLi", "unusual sister" and "good pain Mimimon."

"Li LiLi" focus on the field of fashion, "abnormal sister" was previously called "I have another day", also belongs to the emotional field, but the content is mainly biased towards funny.

The founder of the Mimimon Public is Ma Ling, also known as Mimimon.

In September 2015, Mimimon, who was heavily indebted for starting a film and television company, started his official business, pushing the first article: "Girlfriend to You?" You should thank God because she loves you.

Half a month after the public run, the film "Hong Kong" exceeded one million.

In December 2015, Mimimon broke out and wrote articles such as "To the Slut" and "To the Low", which easily gained millions of views, and by early 2016, Mimimon had 2 million followers.

In June 2017, Mimimon's tweet, "A Brief History of the Dragonfly," was deleted and the official was banned for a month.

In June 2017, the Beijing Municipal Internet Trust Office interviewed a number of websites in accordance with the law and ordered the websites to fulfill their main responsibilities, strengthen user account management, actively disseminate socialist core values, and create a healthy and upward mainstream public opinion environment. The Mimimon Public has been emptied in this self-media crackdown.

However, the chicken soup queen will easily fall, Mimimon is still active, and increasingly worth.

Some media have even counted Mimimon's earnings from December 2016 to May 2017:

According to a previous media to get the introduction of the quotation table shows that Mimi Meng headlines within 10 minutes can break through 100,000 plus, within 1 hour feedback messages up to tens of thousands, is the highest conversion rate of WeChat public number.

In an interview with Startup State in 2017, Mimimon said public has brought her eight-figure annual revenue, 8.9 million WeChat users and 3 million daily readers, and by January 2018, WeChat had grown to 14 million users.

According to 2018 statistics, Mimi Meng advertising is not down and up, the public number one issue price as high as 800,000. According to the new list, Mimimon has tweeted 387 tweets in the past year, including 104 soft texts, with 26.9 percent ad frequency and an average of 1.8 soft articles per week.

In fact, in addition to the rich advertising revenue, Mimi Meng in the "film" also has a layout.

Before becoming Mimimon, Marling had a brief history of entrepreneurial failure.

In 2014, Ma Ling left the Southern Metropolis Daily, where he had worked for 12 years, to join the film and television industry and set up Shenzhen All Things Growth Film and Television Media Company. In a later article, Ms. Ma said she burned out $4 million in investments in 10 months before the company collapsed.

According to sky-eye survey, there are eight companies under Ma Ling's name. 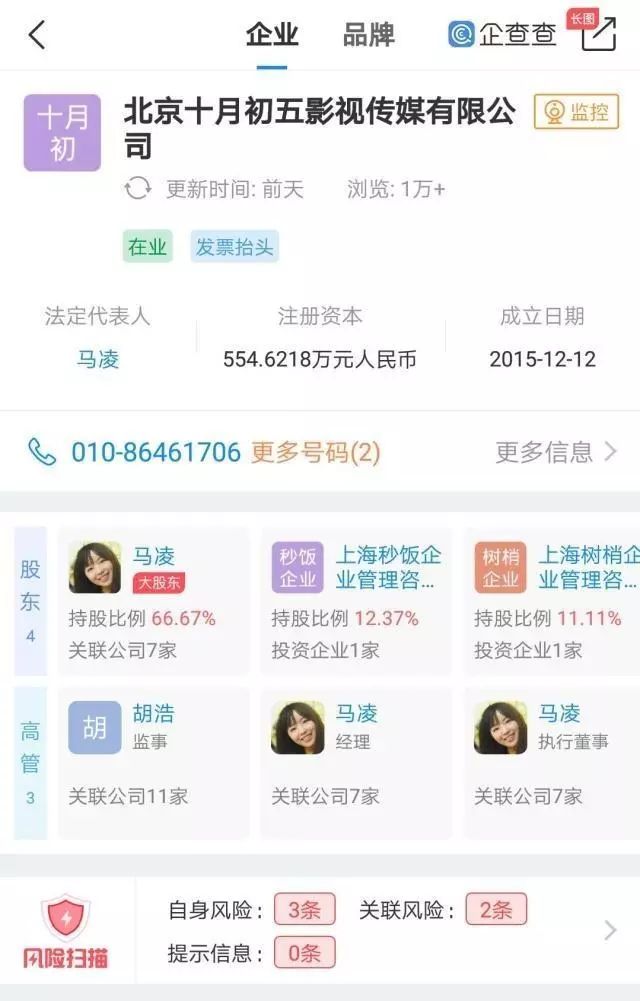 Public information shows that Beijing in early October 5 as a co-producer, participated in Liu Ruying directed the film "Later Us."

In addition, Mimimond has been involved in film and television production in his personal capacity. In November 2016, the TV series "Extreme Jiading", adapted from the novel of the same name, aired, starring Chen He and Mimi Meng as the screenwriter.

After the play aired, the netizens rated it as "heinously rotten" and "ruined a novel", with a score of only 4.1, with more than 45% being a one-star rating.

Mimimon's ambition goes far beyond that.

On November 18, 2017, Mimimon held a "Mimimon Brand Launch" in Beijing. At the launch, the Mimimon team announced its move into the knowledge-paying world, launching a paid audio course in the Himalaya FM, Mimimon Teaches You a Monthly Salary of $50,000.

Wang, the company's vice president, said at the scene that if the listener "does not get a pay rise of more than 50% after three years", he can apply for a full refund.

Although this paid course has been teased by many netizens as a new era of "baby boy, bad refund" scam, the list price of 99 yuan of the course, more than 110,000 people subscribe.

On the Himalayan FM, the course has long been renamed Mimimon's Workplace Improvement Course, with more than 220,000 listenings.

In addition, Mimimon is also involved in the book market.

In the JD Mall, Mimi Meng published books like its public number content, but also by some people's pursuit. 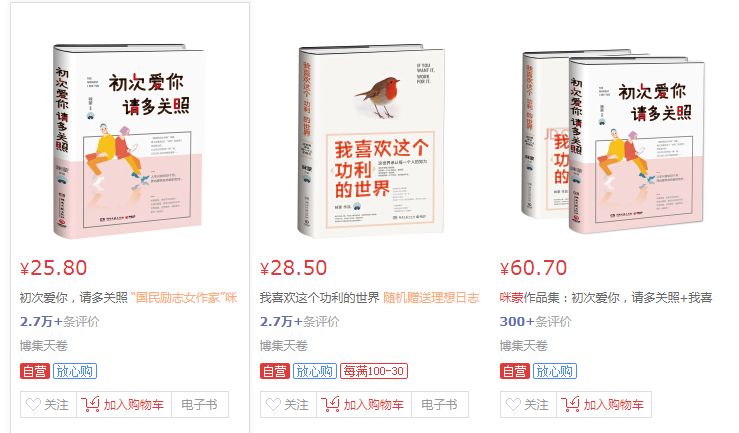 "Love you for the first time, please take care" and "I love this utilitarian world" are two of the best-selling books of recent times, with tens of thousands of reviews alone.

According to the website sales page, "I like this "utilitarian" world" total sales of more than 100W books, according to 34.2 yuan per book calculation, this book alone, brought nearly 35 million yuan in revenue.

Other users are watching

Advertising quote 800,000! The Mimimon is permanently shut down, revealing the "chicken soup" queen's business empire
Up to 200 words, currently totalWord.