Station B, made a few real ads

The material comes from the internet

In an ad unlike the ad "Tide."3Step after
Few people don't knowBStand.
The crowd is broad, culturally diverse and all-encrusted
The latest onesBStand.“Really.”Advertising.
Put a massBStation image
Show it to your audience more intuitively
When you start lookingBStand.
What do you see?

TOPicThe three videos, which were produced at the Changchun Film Festival, were filmed by the Olympic bid director who won the Best Virgin Award at the Changchun Film Festival. It was also his first commercial since turning film director.
SaidBStation this time is also to make the specifications of the film to shoot advertising, film behind each lens, in fact, have been through a number of groups of shooting. For example, in the park, the masters play birds, in order to ensure that the masters can perform the photographer's temperament, a lens shot70 takeare routine operations.

Advertising in the hands of long guns, photography may be very professional, but did not act, want to shoot a "professional state", you must repeatedly run into the mobilization of emotions, which is very difficult to control in the shooting.

There are boys in the subway scene, began to find more than 50 group performances, the director shot the prescribed lens, in order to better sensory effect change the camera, found that the group performance is seriously inadequate, so the next day directly increased the group performance to 200 people to complete the shooting.
It is also this kind of film-style shooting requirementsand all kinds“Small accident”Put itBStation "unlike advertising ads" painting style continues.
Because these videos are less ad-like，The audience has itKeep looking at the motivation.

In addition, exaggerated character expression close-up, and atmosphere to create a full slow lens, a variety of details to a lot, will not cause exaggerated excessive antipathy.

Although the positive film peels off the sense of advertising, at the end of each ad,"You're interested in videos, all of themBStations"information, and slightly brainwashed advertising songs, but repeatedly to the audience, these are a fewReally.·Advertising.。

Why do you always take the "emotional route"?BHow many real ads are you going to shoot?
Break the circle, starting with breaking the stereotype of the masses
It's not hard to see that the whole series of ideas came fromBA tune from the station user:KnownBStation is a studyAPP。So is this jokeBStation breaks a break from stereotypes.
Let's talk about it nowBStation, still some people are still stuck aroundACGUnfolded labels - secondary, ghost animals, niche sub-culture and so on.
But when we really open itBStand and look and you'll find thatBStations are more meta than we think.Apart from.ACGAnd mass entertainment, daily life, and even science and technology, finance......More areas are belowBThe station is fully flowering. 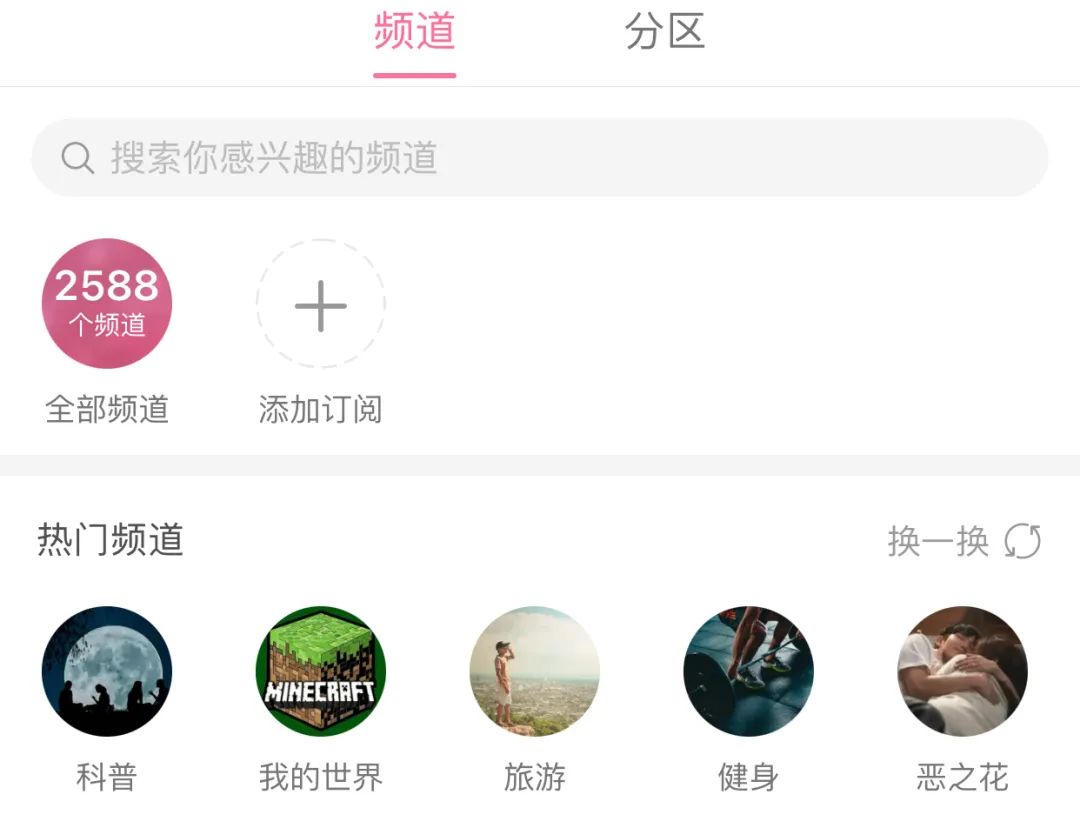 Hundreds of cultural labels, a considerable number of creators in various fields, and high-frequency content consumer interactions have shown that the moon is alive1.72Billion.(2020First quarter data)The small break station is exploring the wider sea - in fact, driven by the user B Station has long been the birthplace of many internet pop culture.
SoPublic awareness has not kept upBStation actual development.
BIf the station wants to attract more users, it must not only break in the businessACGCircle, but also in the public mind, to break the inherent impression.So.BThe station's real campaign,From a more meta perspectiveBreak the circle of "business impression".
Auntie learns fashion, master learns photography, house man learns yoga scenes,BStations are refreshing their own "functional" impression - not only secondary positions, but also a "learning."APP”。

But.BStations don't really call themselves "learning."APPinstead emphasized"You're interested in videos, all of themBStations"。
Most of the sources of advertising influence are whether it is "interesting", i.e. whether ideas attract audiences, and whether they are "useful", i.e. whether advertising information is useful to the audience and whether it is "relevant" to them.
Thus, as mentioned earlier, "learning" is just a cut-in for building the most direct relevance to the audience and making the content "useful".But in practice, inBThere's a lot more you can do standing on the platform. For example, creative sharing, such as making good friends - everything revolves around interest.
And if you becomeBStation users may also become cattle people in an industry because of their interest. This is also in the video“ When you start lookingBstation, from then onXXXOne more cow man”The idea comes from. To enhance the contrast and an epic sense of back and forth,So symphonies and slow shots were used to represent the main characters.
If you look at these unexpected creative stories and protagonists, you'll find thatBStation is also breaking the film's old, middle and young three generations of group impression.

Aunt Cebu can learn to dress and become a fashionable person

Regardless of age, gender, social identity, in this open,tolerant, personalized era, you can also according to interests, enjoy themselves.
When you start lookingBStation, you can be the next best cub.This isBStand outside the actual functionality of learning, yesBThe spiritual territory promised by the station users.
So, in this series of ads,BStation is not only in the expansion of the platform business impression, but also on the "brave to be yourself", "explore their own side" under the social issues to express brand support, encouragement attitude.
Despite this attitude, inBStation other brand films are also reflected, but the expression is very different.
BStation, or that smell
I do not know if you can see, aunt in the basketball juvenile is actually "into the sea" starring, this is the brand can hope that advertising assets have a continuity. In terms of creative content,This series of B station, jumped out of the station content itself, with ordinary users of the single-line perspective to show B station, appears more flat.
Is there a smell of Station B as depicted in this way, and Station B?
In fact.“When you start looking at Station B" intention"Start"Two words, has decided that this film should be filmed for the future B station users to see.
If you've been to the cinema during the National Day, you've probably seen this series of ads. And it's aimed at most of the possibilities"Non-B-station user." Let's talk about station B features, noIt's sure to resonate with the community.
So these three commercials are more like a quick start. It's not in a hurry to tell you exactly what Station B has, but to focus on telling you what you can get at Station B.
For most potential users,"Learn more about the platform, then be attracted to the content and become a user"The process is too long and the time cost is too high. So it's better to visualize the content of the ad than to tell them,How "Station B" can make a difference in my life.
This series is even intuitive, the future user's use of scenario recommendations, are clearly arranged. 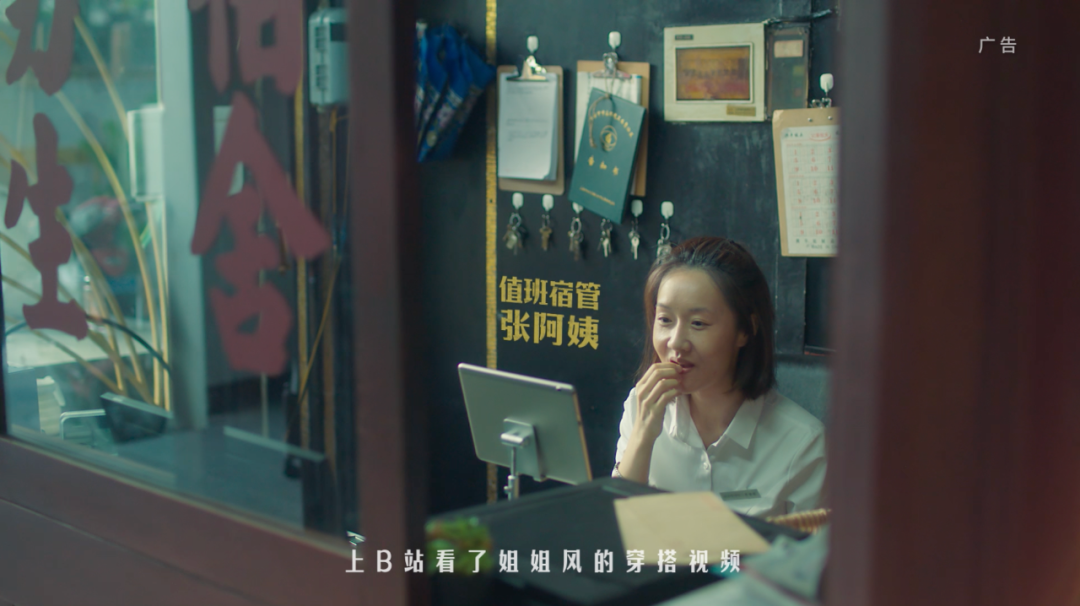 You can go to Station B in your boring leisure time 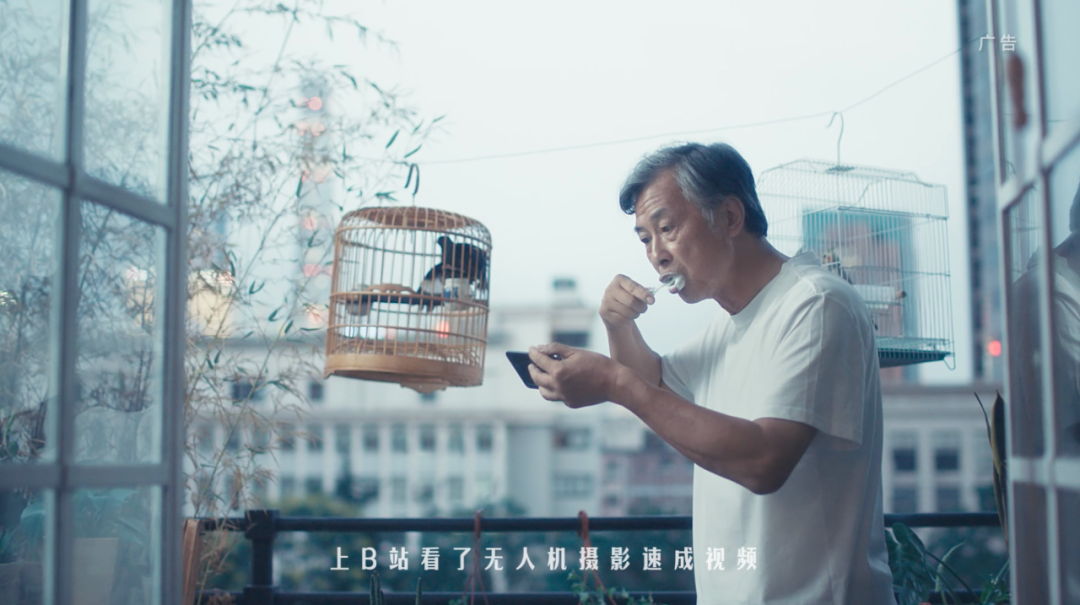 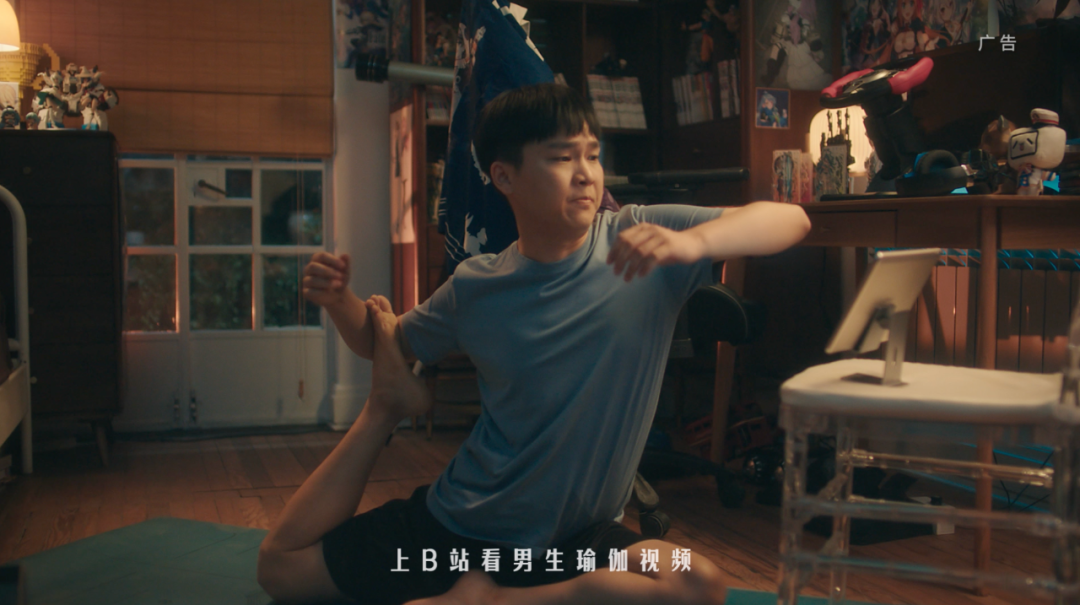 Each scene suggests that Station B is used, more fragmented and everyday - "without wasting too much time, you can create a different life experience". This is in line with the user content consumption habits at the time, but also more conducive to Station B to win the second half of the Internet time war.
In general, the popular and flat narrative makes the B-Station series more efficient. Just because you don't have a Lo skirt, a Han suit and a seat doesn't mean you're missing a B-stop.
This series of B-station ads, inI.It seems that a symbolic spiritual symbol - each protagonist in the end of the heroism of the waist and magnificent BGM, are obviously B station's blood "middle two" tribute.
B station two, although derived from the secondary, but more is to show the hot blood vitality of platform users,It can be saidIt is the unique "spirit" in the station. 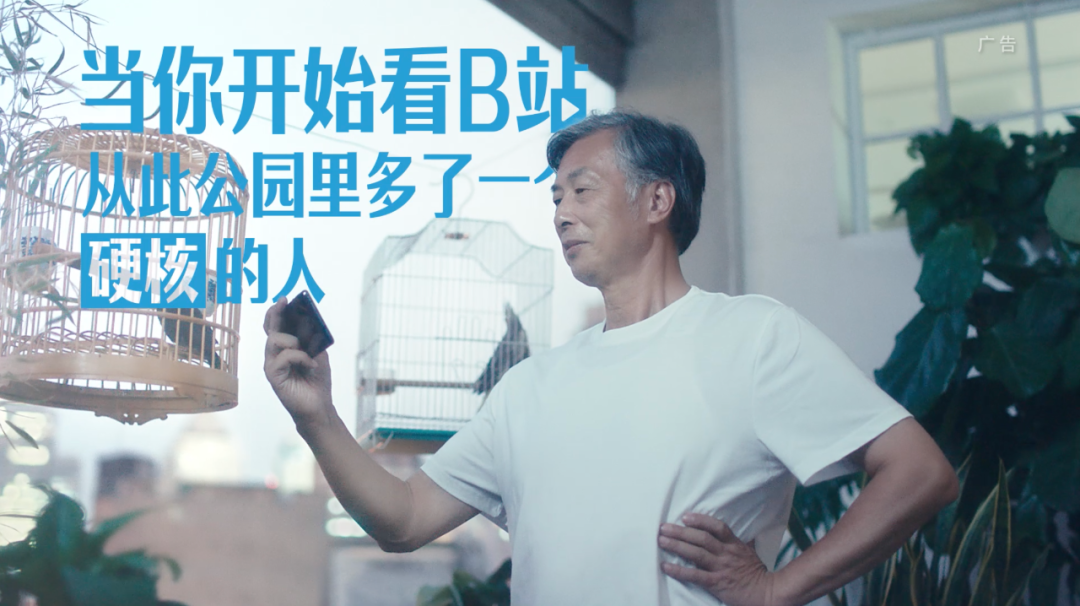 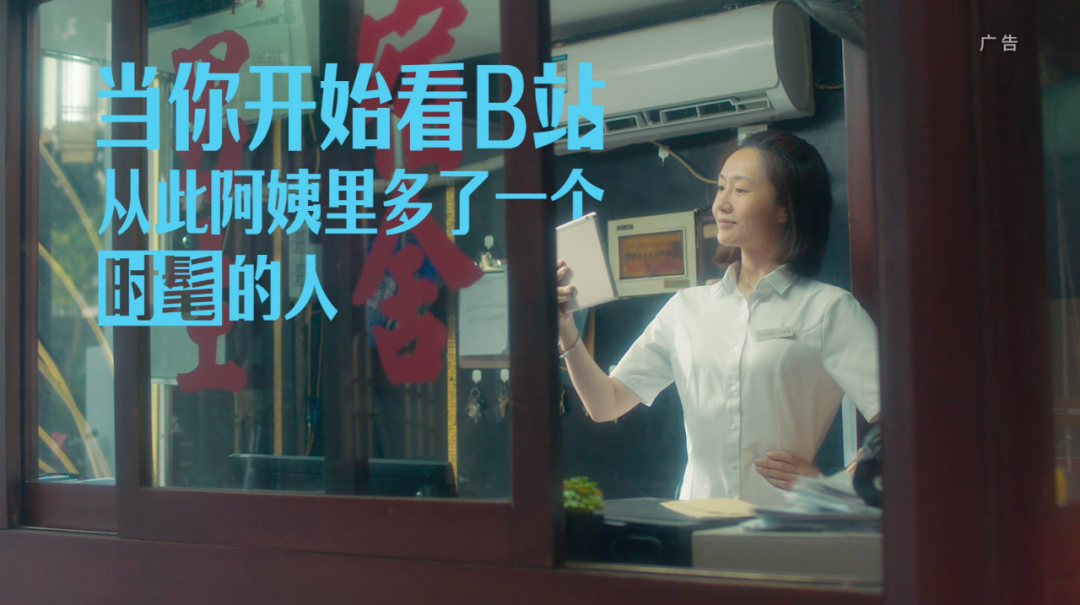 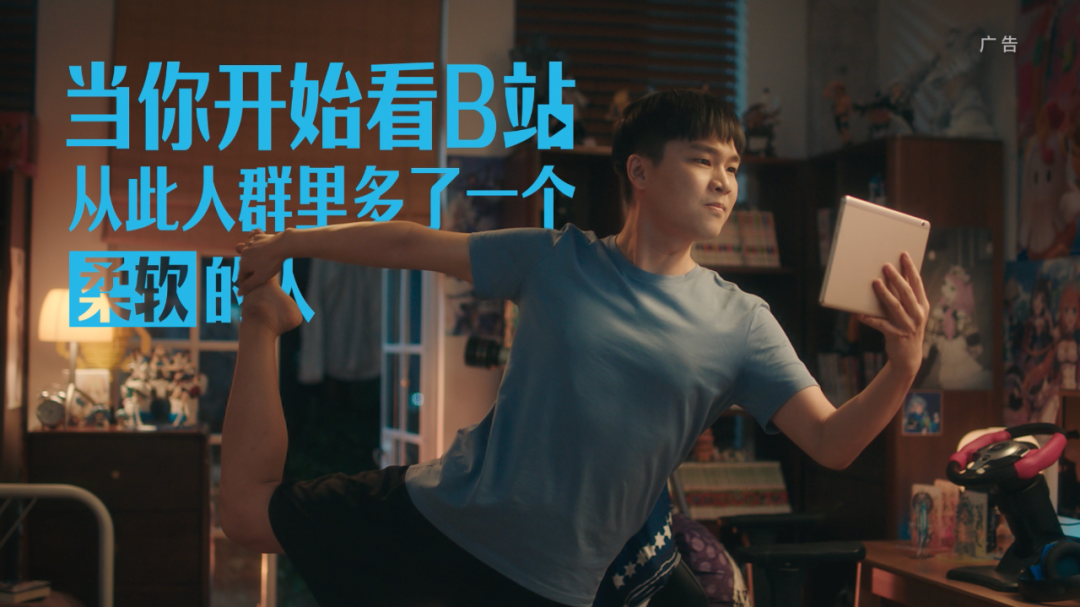 The second is the age-free learning drama, which tells everyone that Station B has always defined "young" and has never changed its platform attitude.There is love, there is creativity, there is expression, there is a positive attitude towards life, that is“Young.”。

Finally, let's go back and see where the series startedBStanding growing,BStation young culture is also growing.
BThe growth of the station is actually synchronized with the young culture. The "young culture" here doesn't just mean the singing, dancing,rapstreet and ghost animals.
It's more of a kind rooted in the bones of contemporary young people“Growth”——Not satisfied with the world in front of us, not satisfied with being a follower of culture, not content with only the stage“Others.”show.
So they're inBStation to share, output, display, to promote a variety of niche culture into the torrent of the times. Now, this growth force is radiated out of the circle, become all ages, the same direction of the growth of each ring layer.
When I began to lookBstation, and I saw the rise from the young cultureBstation, is taking more people to the young.
When you start lookingBStation, what do you see?

Images, materials from the network, copyright owned by the original author, intrusive deletion 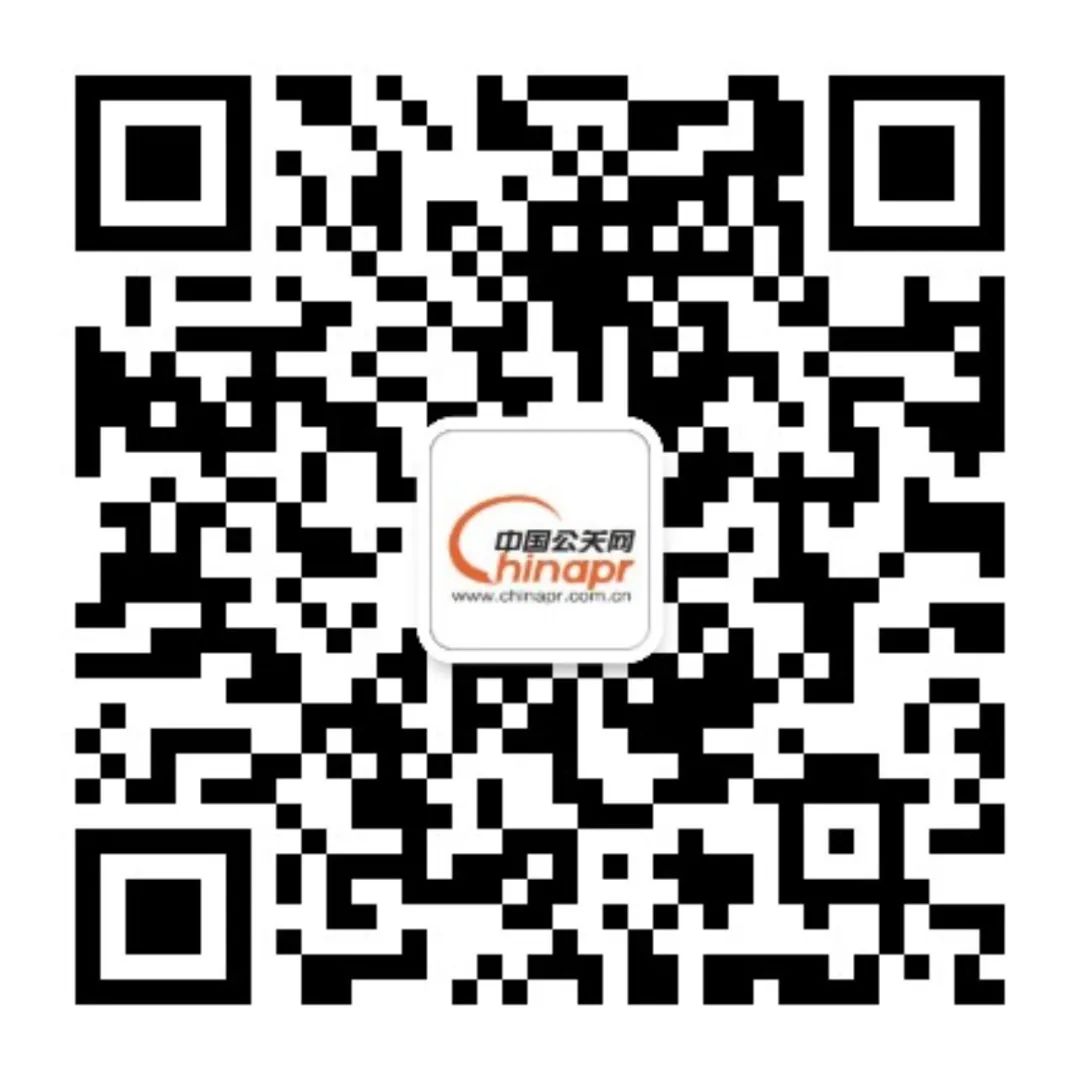 Station B, made a few real ads
Up to 200 words, currently totalWord.