The following articles are based on several stories

DataStory is the leading provider of big data services in China and has long been committed to the deep cultivation of large amounts of Internet data and the mining of commercial value. Help enterprises realize the integration of data value and business depth, and make more scientific decisions in marketing, research and development, production and other major applications to maximize the effect.

Face into the mobile Internet era today, as almost the only terminal entrance to the smartphone, reached close to the hands of a market. After a period of super-growth in the demographic dividend period, mobile phone shipments began to slow sharply. In order to seize the consumer market, how to use brand marketing to increase product value has become the focus of many mobile phone brands.

Since 2010, from focusing on the world to sparking an annual marketing fever for major brands, Apple's marketing approach to the launch has been impressive. Last week, Apple launched what netizens called "the most kidney-painful iPhone X in history", setting off another wave of discussion. Will this continue Apple's popularity in the Chinese market? Can domestic brand innovation buy people's hearts? What will be the next hot spot in the mobile phone industry? 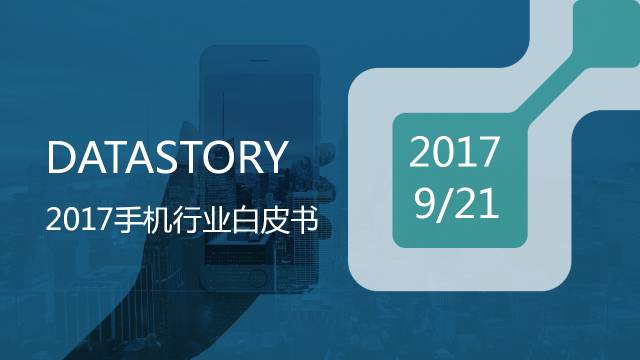 On September 21st, dataStory 2017 Big Data Business Innovation Forum (Guangzhou Station) was successfully concluded at W Hotel. The 2017 Mobile Industry White Paper, released at the same time on the forum, is based on the DataStory Mobile Industry Library, which was created between January 1, 2016 and September 14, 2017.The industry database covers 90% of the mainstream website data, such as social, e-commerce, video, portal, more than 10,000 different sites, but also customized 3C vertical website and major mobile phone brand forum, comprehensive tracking and monitoring of more than 20 mainstream mobile phone brands at home and abroad.This report around the overall public opinion of the mobile phone industry, mobile phone brand launch and star IP marketing, consumer attention to the four major parts, a comprehensive presentation of the domestic market mobile phone brand status quo. Kin, Director of DataStory Data Analytics Services, is on hand to interpret trends in the mobile phone industry.

The mobile phone industry is hot, with the average monthly sound volume 57% higher than the industry average

The average monthly sound volume of the mobile phone industry exceeds 1.4 million, 57% higher than the industry average, and the popularity of the mobile phone industry is higher; The reason is no less than two points, on the one hand, the brand target population orientation differences. OPPO and VIVO are positioned to be younger, with a younger discussion population and a full-scale sinking to third- and fourth-tier cities, gaining a longer user base. Although the apple-watching population is also young, the city level is higher. Comparative analysis shows that the international brands Apple and Samsung public opinion heat, basically concentrated in a second-tier city, domestic brands more in the mass market. 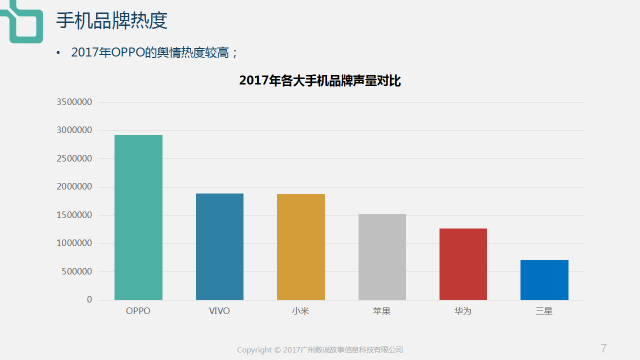 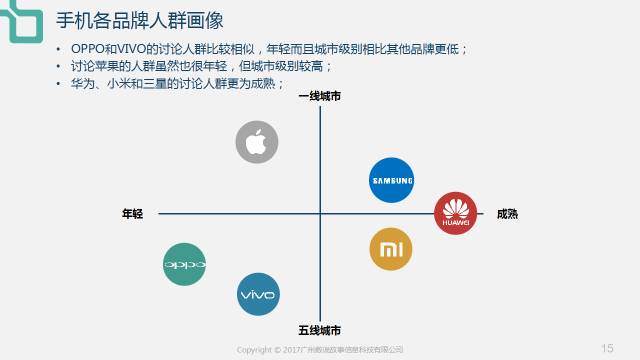 On the other hand, the high profile of OPPO and VIVO is also due to the use of star IP in both their brand activities. Small fresh meat star endorsements are the brand brought a lot of traffic. In the main position of the social platform of netizens, in addition to the red envelope interactive marketing, "endorsement" is also the brand's very important traffic responsibility. In 2016 and 2017, there were 11 peaks in the voice volume of the mobile phone industry, 8 of which were related to the launch. The highest volume of sound is the 2017 Apple launch, of which the most attention of netizens is "face recognition", "surface screen." 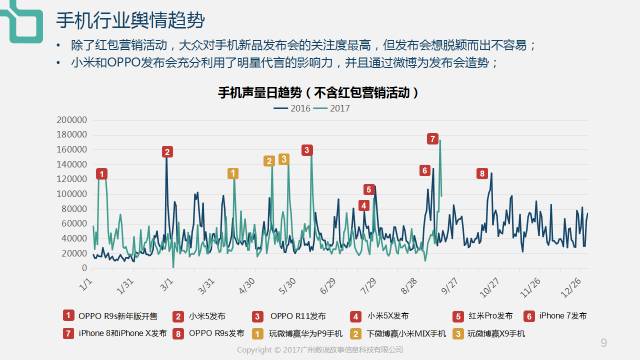 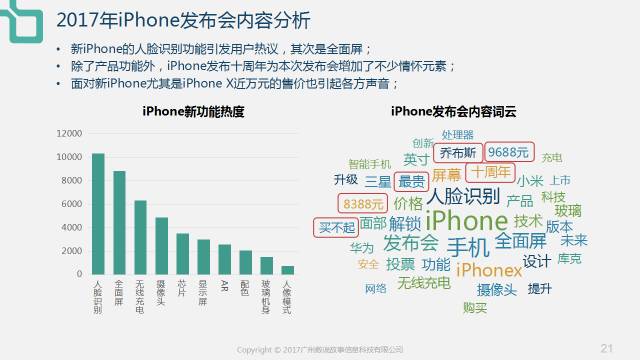 In second place was the launch of OPPOR11 in June this year. It's only been a month since Apple's long-term battle, the OPPOR11 warm-up, but its content is very focused, that is, "20 million cameras before and after." In addition to OPPO also found 9 spokesman endorsements, with the help of the star effect heat continued to rise, coupled with the day's live broadcast of Zhejiang Satellite TV, so that the entire launch of the spread of coverage expanded rapidly. 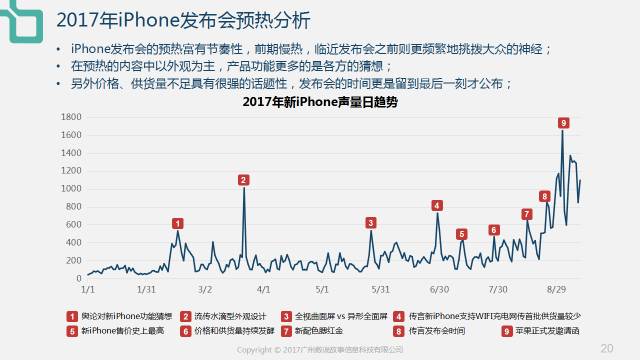 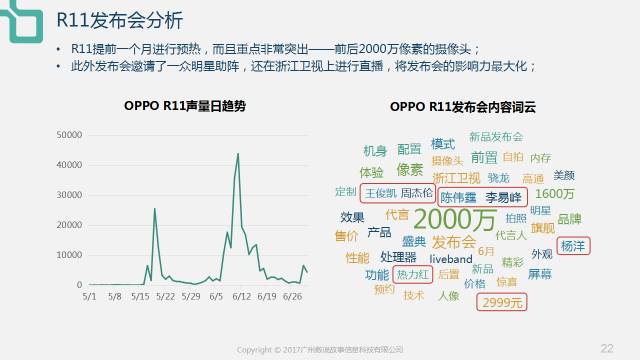 Appearance and Shooting remain the focus, with Full Screen and Double Camera continuing to move higher

The mobile phone industry's hottest product features focus on product "appearance" and "shooting", accounting for 34%, 28%, respectively; In terms of appearance, the discussion crowd to a second-tier city, young users, of which the body color and material are the most concerned, screen-related content is also very important, "full screen" continued to rise. 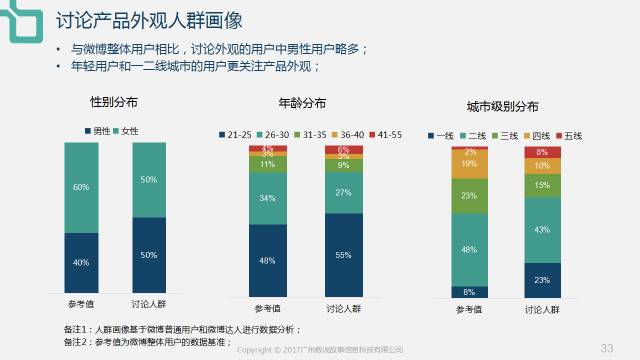 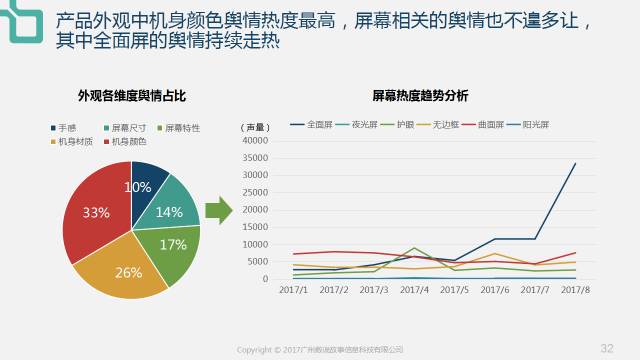 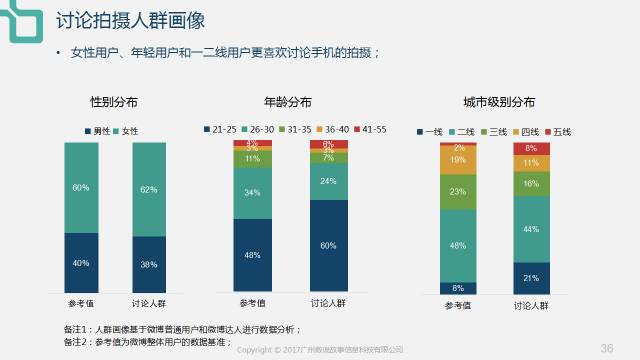 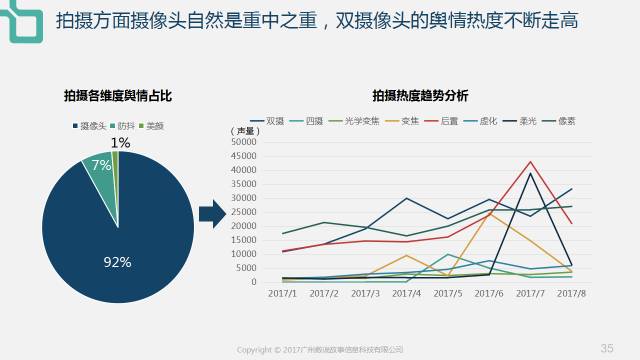 Overall, compared with other industries, mobile phones are still a hot topic of discussion among the general public, and the domestic mobile phone market is likely to continue to climb in 2017. Weibo is an important channel for topic marketing, and the voice of news forums revolves more around products and experiences. In terms of marketing, in view of the frequency of the release of new products and user groups, OPPOR11 marketing model or more worthy of reference, star IP will still be the majority of brand management means, the depth of cooperation to a certain extent around the effect of endorsement and brand influence to increase the magnitude. And in terms of users' demand for mobile phone functions, full screen, dual camera or the opportunity to become the mobile phone industry's next mouth. 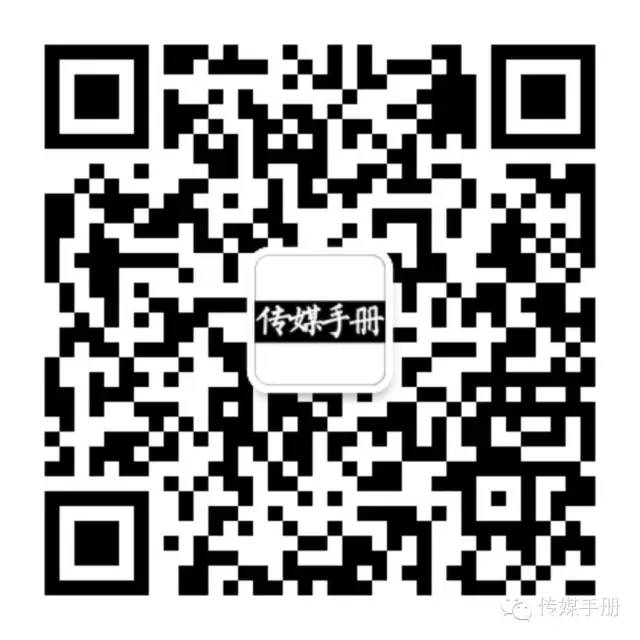 Press and hold QR codes to follow the interaction