This is the 33rd article I sent

I remember when I first started working as an optimizer, my Leader, after someone had taught me basic stoue, said to me, "You're going to start running, think about your account structure, and then you're advertising." "I heard it a little bit of a blindfold at the time, what is the account structure?" Isn't it time to advertise?

Today, thinking about the structure of the account, but also a more profound understanding of the importance of account structure.

First, let's look at a picture: 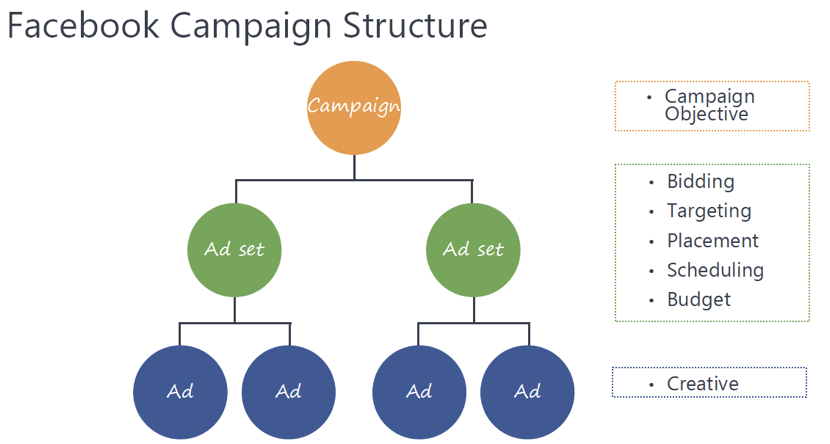 As anyone who has run a Facebook ad knows, this is the most basic Facebook ad framework. In the Campaign level is mainly to determine the delivery target, Ad Set level can set more things, bid, user positioning, budget, optimization methods can be set at this level, Ad level is material.

The initial start, the beginning is non-stop to do advertising on the new, more is the material level of the contrast test, leaving good material, remove or optimize the effect of poor material. At this time all the account structure is actually the most basic material test. The difference smaterials can be separated from the Ad hierarchy or by the Ad Set hierarchy. Figure: 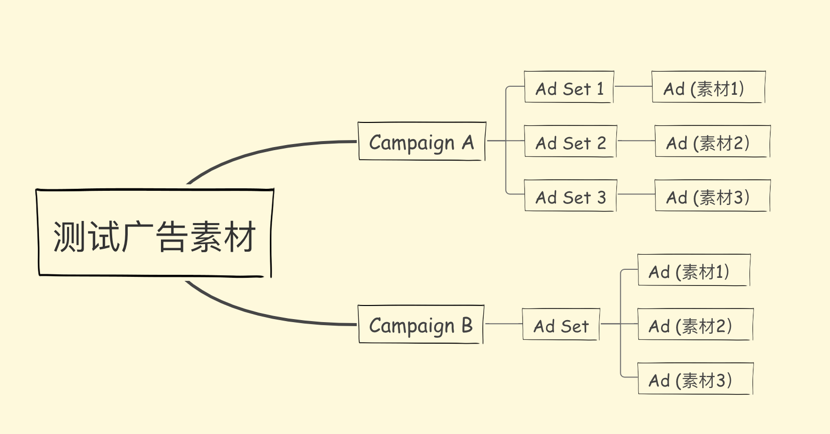 These are the two simplest ad structure settings that are based on the footage as variables. For ease of iteration and post-optimization, many experienced optimizers choose to perform the initial material iteration in the form of Campaign A. Further campaign optimizations based on the results of the iteration. Not to mention which structure is better here, but to see the different forms of the advertising framework under the same test goal through simple examples.

The above is only a single information as a test variable under the account structure selection, the reality, we in fact in addition to the change of material, there are different countries, optimization methods and other needs to we to iterate testing, the diversity of the advertising framework is more obvious. According to the actual situation of products and optimization indicators to build a reasonable account framework, is the optimization of the need to consider the problem.

What is the difference between Facebook VO and AEO?

What if Facebook's AEO budget doesn't cost it?

Google UAC image ads can not be in a large amount, mainly concentrated in the text is the reason why it

How do I add administrative permissions to my Twitter fan page?

How does Google's different types of UAC series set how to bid?

Welcome to me to write a message.
ClickI'm looking.Give it a good review. 👇
Read
Synchronized to take a lookWrite down your thoughts