Don't expand your audience, you've wasted half of your advertising budget!

Want to know why clearly expanded the audience,

Are ad conversions getting lower and lower?

Want to know how to attract those potential customers?

A preview of the July course is interspersed 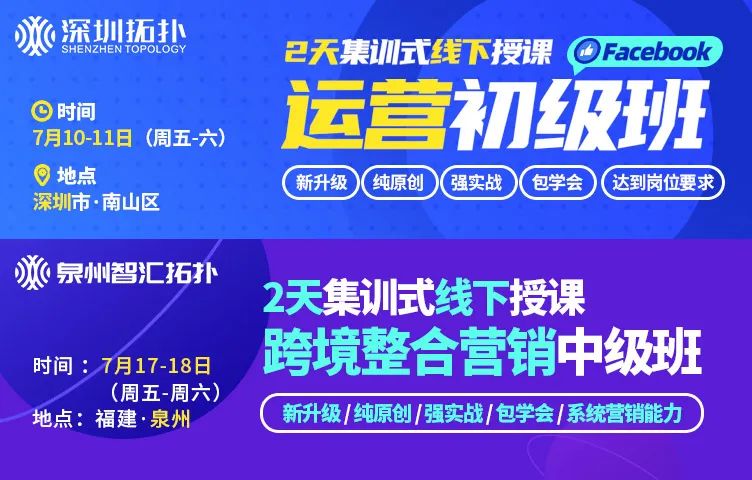 Add course consultant WeChat at the end of the article,Get early bird deals!

Facebook's similar audience gives you access to many people who share the same characteristics as existing customers. Using a large, similar percentage can help you attract more people, but these people may have very low conversion rates. Other wordsExpanding coverage will come at the expense of audience accuracyIf you don't expand your audience correctly, you might have wasted half of your advertising budget. When you increase a similar percentage, you may reach the point where the audience becomes so large that there is little targeting for a broad audience. In this case, instead of helping Facebook narrow down its target audience, you rely more on the algorithm to pinpoint potential customers among a large audience. While this may be appropriate for large accounts with large amounts of data, it doesn't take full advantage of the full functionality of lookalike audiences.

On the other hand, "super" similar audiences have advantages in size and quality. It's a combination of different looks targeted in an ad group (each with very similar characteristics to the custom audience on which it's based). Super Lookalike maximizes Facebook's Lookalike Audience capabilities。 Facebook's algorithms get better and more accurate every day, but when you doNarrow down and specify the characteristics of the audience you wantyou can help Facebook do better and get better results. Because of the high relevance of Super Lookalike Audience, it increases your relevance score while providing higher click-through rates and higher conversion rates. Facebook will then reward these audiences with a lower cost per thousand impressions (per thousand impressions) to improve the overall performance of your ad group. This approach is basicallySuitable for all industriesBecause it relies on Facebook's lookalike audience data module, it's fully available. And the more data you have, the more effective it will be. The most important data points you need are a wide variety of high-performance Custom Audiences and a wealth of historical data about high-performance similar audiences. Note: This article assumes that you have Facebook pixels and event tracking installed. Watch this video for step-by-step instructions on installing pixels and read this article to learn how to set up event tracking using the Facebook Event Setup tool. Now we'll look at how to build and expand audiences with similar intents to target with your Facebook ads.

The quality of your Custom Audience is critical to creating a stable, performance-enhancing lookalike audience.You want to focus on your most valuable customers and therefore create custom audiences based on conversion events at the bottom of your channel.

You can create custom audiences based on Facebook pixel data, targeting people who complete different conversion events on your site. Another way to focus on the best customers is to create a custom audience based on value. To create this audience, you can use a list of customers and add any number for each customer to represent their lifetime value to the business. All you have to do is upload this list to Facebook and create your audience based on it. Keep in mind that you need to update your customer list regularly to make that audience relevant to your business. Creating a value-based audience with pixel data saves you some hassle because your customer data updates automatically. In addition, in a recent update, Facebook added an option to turn each of your pixel-based lookalike audiences into value-based audiences with a single click of a button. Advertisers tend to ignore other valuable Custom Audiences, who spend time on product pages, the most spent users (one of the most powerful value-based audiences), and those who watch 75% or 95% of videos. For e-commerce, I recommend starting with a Custom Audience based on a major event that occurs on your site: 1, procurement2, initiate checkout3, add payment information4, add to the shopping cartTo create these site-based Custom Audiences, make sure you have Facebook pixels installed on your site and identify these specific events. When you're done, go to Audiences in Facebook Ads Manager to create your first Custom Audience. Click create an audience drop-down menu, and then select Custom Audiences. 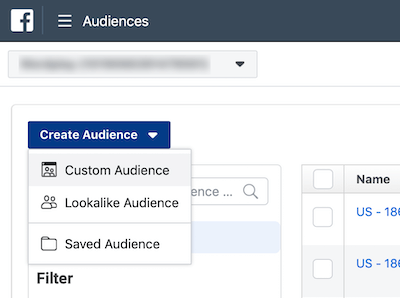 In the Create Custom Audience window, select Site as the source. 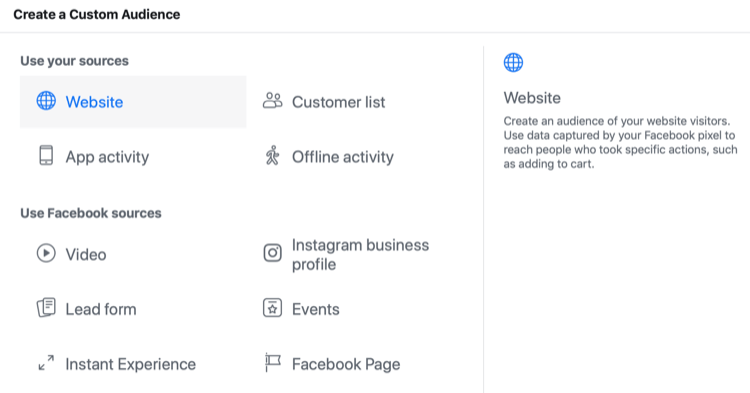 On the next page, select your Facebook pixel and use the drop-down menu to select the events you want. Then add a name, and then click Create an audience. 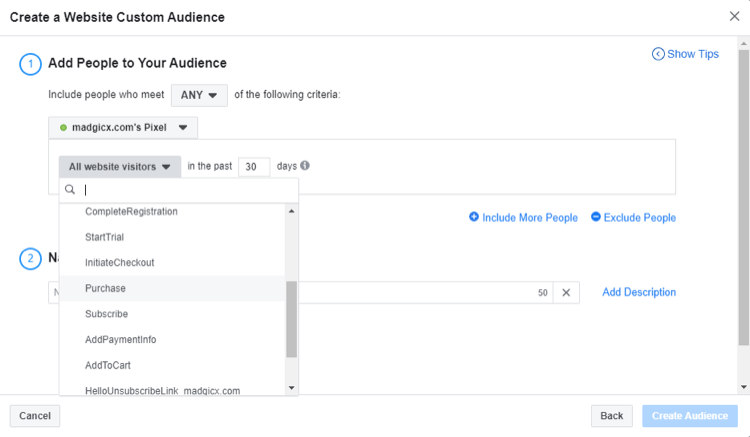 After you've created your first audience, repeat the steps above to create three other Custom Audiences. Keep in mind that while these Custom Audiences may overlap, eventually the range of similar objects will eventually become large and diverse enough that overlap will not interfere with your ad group. In addition, all of these similar objects will be targeted in the same ad group, so you don't have to worry about ad groups competing with each other by targeting the same audience. Combining audiences that might buy, initiate checkouts, add payment information, and add to your shopping cart will give you a large audience, including those who are most likely to take multiple high-intent actions on your site. That's the power of the super lookalike audience you're going to build.

to determine the "super" lookalike audience

The next step is to identify the best-performing Custom Audience based on key performance indicators (KPIs). You'll then create low percentage similarities based on each of your best Custom Audiences and target them in the same ad group. Each of these "hybrid" lookalike audiences will be a super lookalike audience. To determine which ad groups are currently performing best, open Facebook Ads Manager and go to the Ads Groups tab. Add a column to the most important metrics, such as ROAS, and sort the list by that list.

Once you've identified the best ad group, find out which audiences are behind them. To do this, click changes under the ad group name. Then scroll down to the Audiences section and write down the audience name. Repeat this process for each of your major ad groups to compile a list of the best performing Custom Audiences.

Now go to Audiences in Ads Manager and create a low percentage look based on each of your major Custom Audiences. Select your first Custom Audience and click the button with three points. Select Create a look from the drop-down menu.

It is recommended that you use a similar audience of 0% to 3%, depending on your target country. 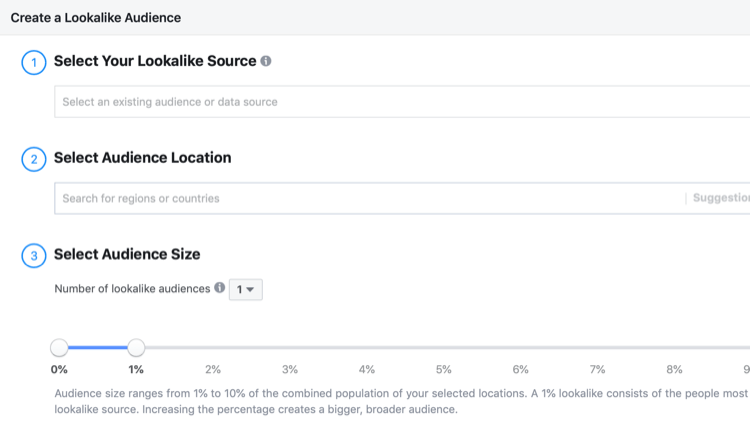 Getting great results early will allow you to scale your super-similar audience vertically by increasing your budget. Once you've maximized your audience, you can scale your audience horizontally by applying the same approach as creating a super lookalike audience:

Try creating similar objects from the same seed audience using different percentages (for example, 2%, 5%, and 10%). Expert tips:When testing different similar percentages, don't exclude a smaller percentage of your audience that you previously used. The reason is that the audience is so large that even if there is eventually some overlap, it can be ignored, especially when considering bid overlap. Therefore, there is no need to exclude the best audience that has proven to deliver high performance.

The more audiences you can test, the better. Start with a large audience and use all your data. I recommend testing the following audiences: Site visitors:Start with the visitor who performs the high-intent event (as described above), and then develop to the visitor who performs low-intent events such as page browsing and viewing content.Social page data:People associated with your Facebook page, Instagram business profile, or other presence.Ad participants:The person who saved or interacted with your ad.E-mail list:People who buy from you directly on Facebook or elsewhere. 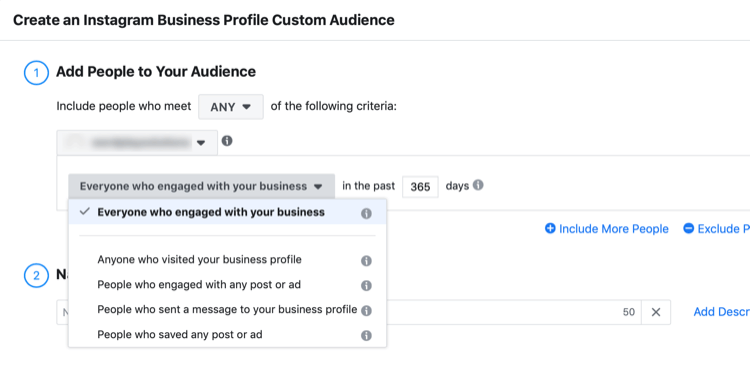 When you create custom audiences for Facebook and Instagram page managers, ad participants, and video viewers, you can extend the time range to include data from the past 365 days. 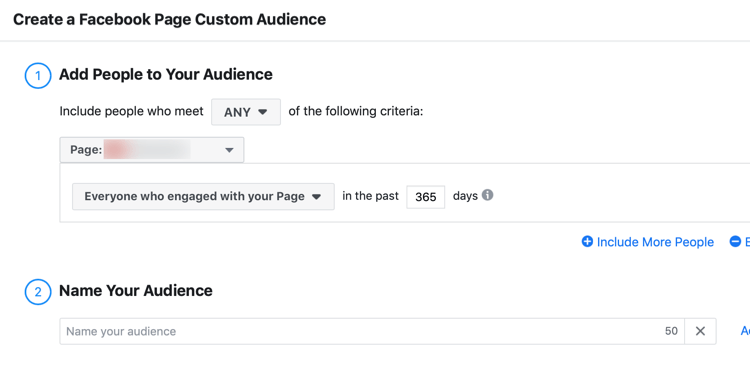 For site visitors, you're limited to locking data for up to the last 180 days; You can do this by uploading an email list to Facebook. When testing for different data recentness, divide the dates into different datasets. Ideally, test data from the last 7, 14, 30, 60, 90, 180, and 365 days, if possible.

Try to build similar audiences in different countries and regions. Start with the best performing countries and then expand. You can also combine multiple countries or regions in a seed audience (but not lower and higher CPM regions). If you're marketing globally, the best combination is the biggest English-speaking countries: the US, UK, Canada, Australia and New Zealand. On top of all these options, try mixing all these different variants when zooming. You can use one element at a time (time, country, etc.) or all of them at once. Expert tips:After you've tested your lower-budget Super Lookalike Audiences with ad group budget optimization, you can use Ad Group Budget Optimization (CBO) and launch four or five different ad groups, each with four Super Lookalike Audiences. CBOs are best suited for larger audiences, so you can use a slightly higher percentage of lookalike audiences at this stage.

Based on real data (which you may already have in your account), they work best when creating super-similar audiences. The more data you have, the more effective your super-similar audience will be, which will improve the performance of your Facebook ads. The "secret" of super-similar audiences is using the data sets you have the potential to create very high-quality audiences in terms of relevance. At the same time, this method makes it big enough for Facebook to run it through its algorithms and use its magic. Not many advertisers currently use this approach, so this is your chance to stay competitive. Create more ad groups with super-similar audiences for higher returns on your ad spend. What do you think? Will you try to target highly targeted super lookalike audiences through Facebook ads? Share your thoughts with us in the comments below!

Preview of the course in July 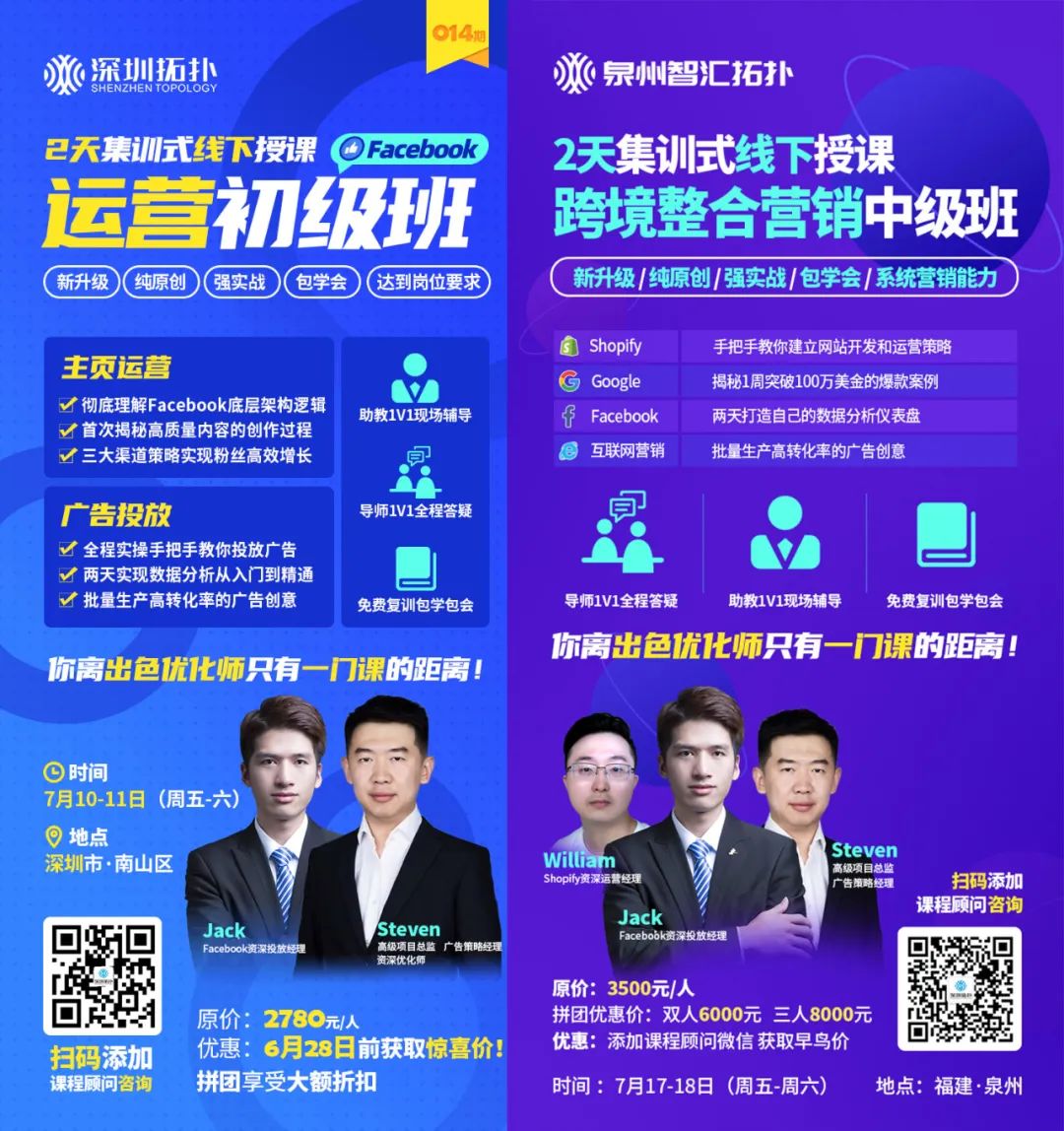 Don't expand your audience, you've wasted half of your advertising budget!
Up to 200 words, currently totalWord.

Analysis . . These 5 tricks, let outdoor advertising into the hearts of the target audience!
OTT big-screen advertising faces three mountains: the audience is not clear, the media value is not clear, the marketing effect is not clear
"How do I design e-commerce ads that appeal to readers?" It's critical to learn this method."
Internet TV audiences are growing, but advertising spending is lagging behind
Advertising Psychology! Audience psychoanalyt analysis