Internet TV audiences are growing, but advertising spending is lagging behind

Internet TV households now make up nearly three-quarters of all U.S. households, but these levels of penetration do not necessarily make up the huge advertising market. 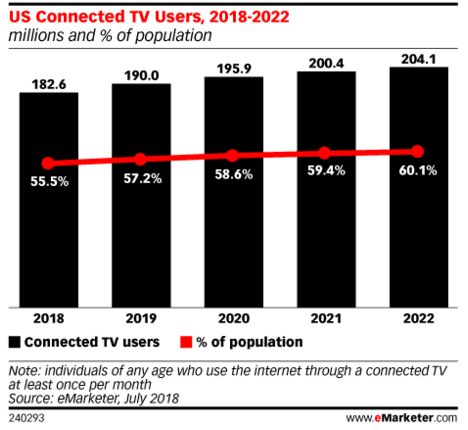 eMarketer estimates that U.S. Internet TV users will reach 182.6 million this year, up 8.1 percent from 2017 and about 55 percent, according to a new forecast.

At the household level, eMarketer estimates that there are 88.7 million connected TELEVISION households in the United States, or 71.6 percent of all households.

This shift in Internet TV is not limited to the U.S., with IHS Markit reporting that the share of smart TVs connected to the Internet will reach 70 percent of global TV shipments this year, up from 45 percent in 2015.

Internet TV audiences are growing, but advertising spending is lagging behind
Up to 200 words, currently totalWord.

"Bed before a back 58" advertising article 08 audience long tail theory and word-of-mouth marketing
Easy To launch ads like audience search fast, accurate, stable
Attracting the eye of your audience? Humor advertising is the best choice
2017-2018 Automotive Digital Advertising Audience Media Habit Analysis (with download)
How can I improve the elevator advertising audience experience? Here are five psychological principles to understand