When I was a new creative design of the small white, whenever I see some classic award-winning advertising works, I will be confused: "Creative is born or can be practiced the day after the day?" ""The idea is so sky-high, can I learn it?" "I just don't have an idea, how can I open my mind?"

Later, I visited a school after the master told me that creativity can be practiced. I summed up the tricks as a secret here to give, share some ideas and open up ideas.

Let's open the first page of the cheats, to practice this work, we must first from... No, you have to figure out for yourself what creativity is first.

For the generation of ideas, many people even think that creativity is born with the system's own, natural genes. Others thought it was everyone who got together for snacks and hummed songs, and suddenly they were robbed of their ideas.

"Brainstorming" can indeed collide with a lot of good creative points, but not the directionless thinking of the line, before the "brainstorming" need to do a good job in advance, and this time will reflect the importance of single-man combat.

"Advertising creativity" is a "science that arouses curiosity, wonder and attention", and many of the ideas are the product of following the rules after learning a lot of works, not just a casual meeting can "brainstorm" out of the idea.

So how did most of the legendary Big Idea come about?

HUGGIES (Curious) urine is not wet to suck the grass and the ocean dry, fine water performance is really strong enough. These two ads directly exaggerate the function of the product - water absorption, so that the picture conveys a very clear theme message. The baby used such urine not wet sleep, mother must be relieved.

Want to secretly film the girl also worried about being found, do not want to have this embarrassing words, OMAX wide-angle lens to help you solve the problem.

The most realistic print effect. 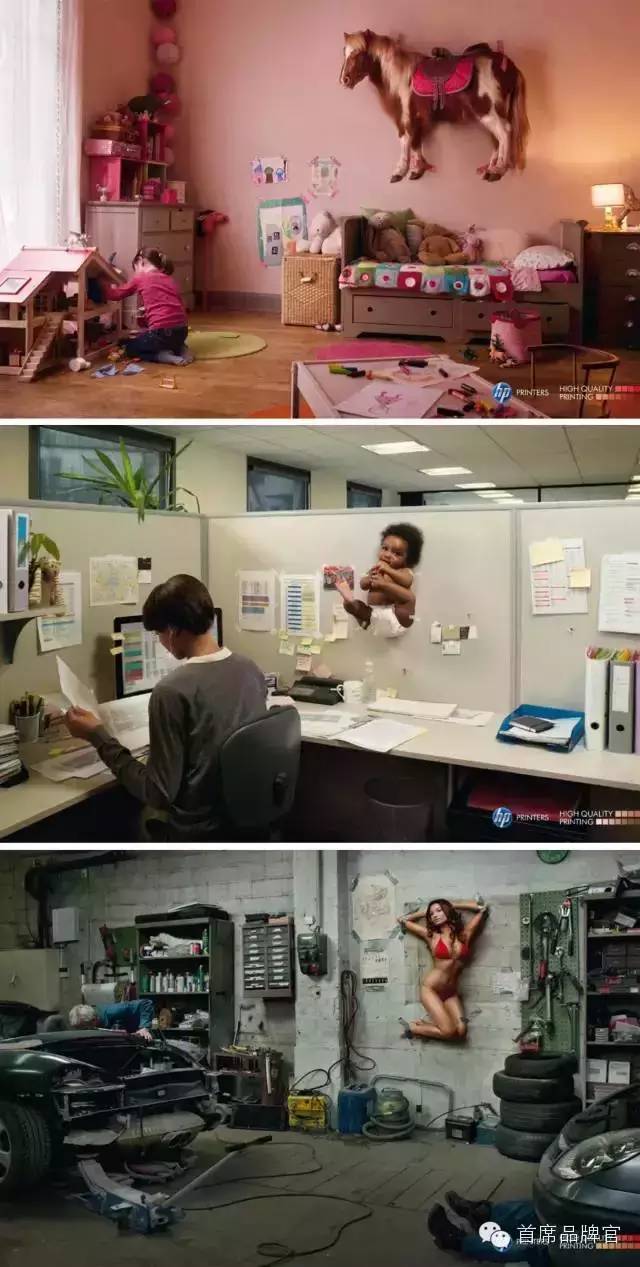 Look far, see clearly, just like in front of you. Proper exaggeration is always the magic weapon of advertising success.

The method of contrast is mainly divided into two kinds, one is to compare two different things or two aspects of the same thing together, from the differences presented by the comparison to emphasize the performance and characteristics of the product, to give consumers a profound visual feeling.

The other is the same industry comparison, common in the major rival companies in the advertising creative tear-up war, that is, the so-called competitive marketing, but this does not prevent the birth of good ideas.

That's the case with Idea, who won the 2011 Cannes Advertising Festival's all-time award for "Heaven and Hell," which presents the sturdy of the rookie suitcase in a contrasting way. During the journey, the passengers are enjoying the heavenly treatment, but the travel box is suffering from hell, the journey is over, the travel box is intact back to the hands of the passengers."

Shaving ad: This is a group of quite meaningful ads, this ad consists of a contrast chart, on one side is a fur vest on the side of the beauty's hair, which side of the man is more attractive, the answer is self-evident. 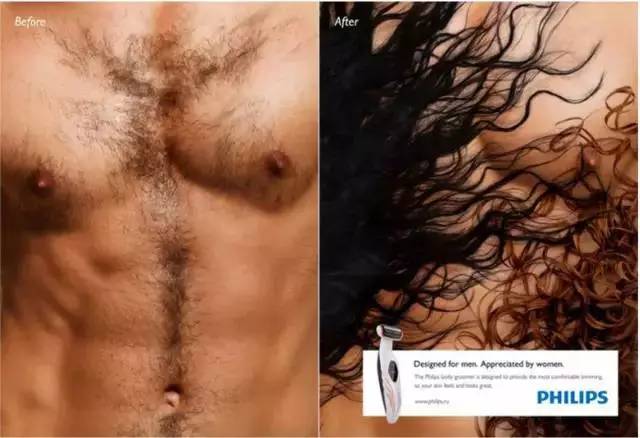 Anti-competitor advertising if the creative point is not clever enough, it is easy to play with fire, such as a recent car in the fight against a U ads, then put themselves in a piece of scolding. But this kind of technique also gave birth to a lot of classic advertising. Such as Coca-Cola VS Pepsi, BMW VS Mercedes-Benz and so on.

Pepsi made an ad mocking Coca-Cola on Halloween in 2014, only to be hit back by Coca-Cola with the same ad. In the first picture, Pepsi means wearing a cape with Coca-Cola printed on it to scare people! The second picture, Coca-Cola means that Pepsi is ordinary, ordinary people long to be heroes, so put on the Coca-Cola cape! Coca-Cola symbolizes heroes. 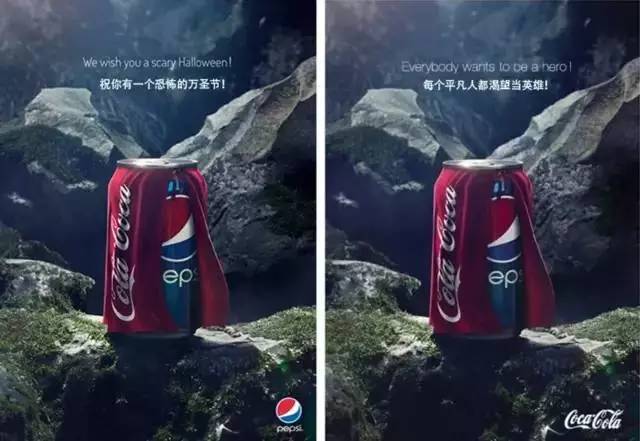 The third style of the creative treasure trove - anthropomorthic law

Anthropomords are those who treat things as human beings according to imagination and abstract concepts as people. In the specific design, there are two ways, that is, to shape or intend behavior, through some ridiculous dynamics, appearance, plot and so on very happy to show creative views.

Acerca Health Center: Get rid of that "mini you"! - Turn the little belly anthropomorly into a small version of you and show it in three different environments, humorously conveying the troubles of obesity. 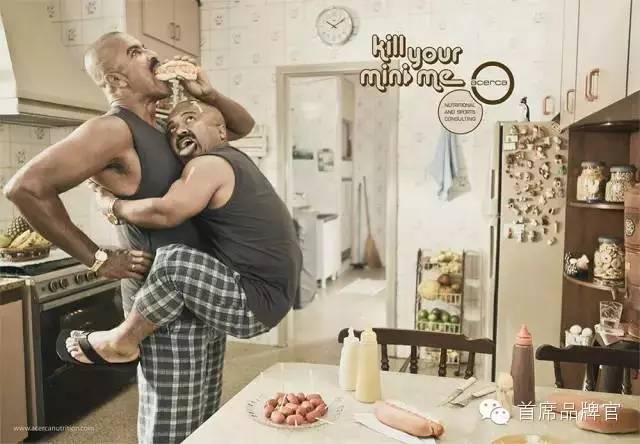 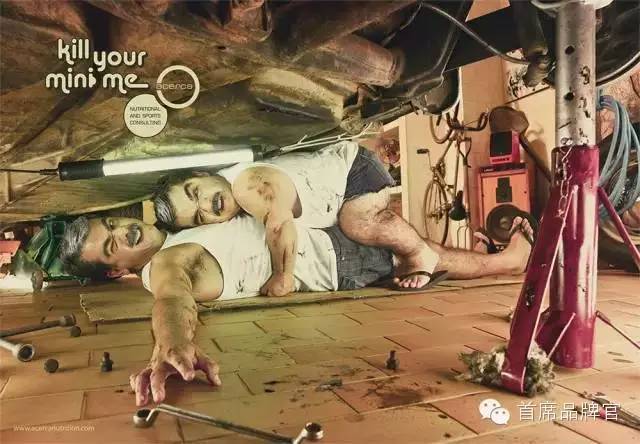 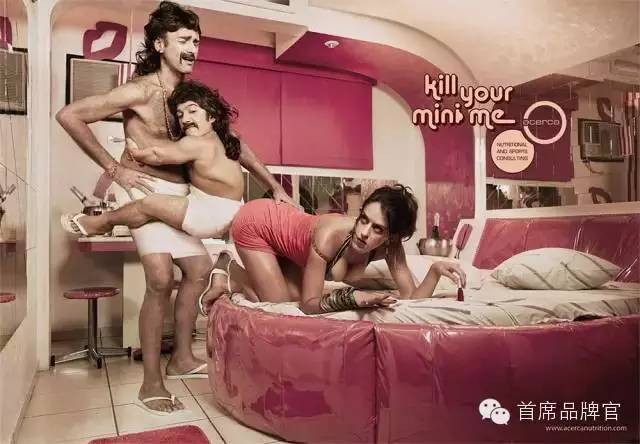 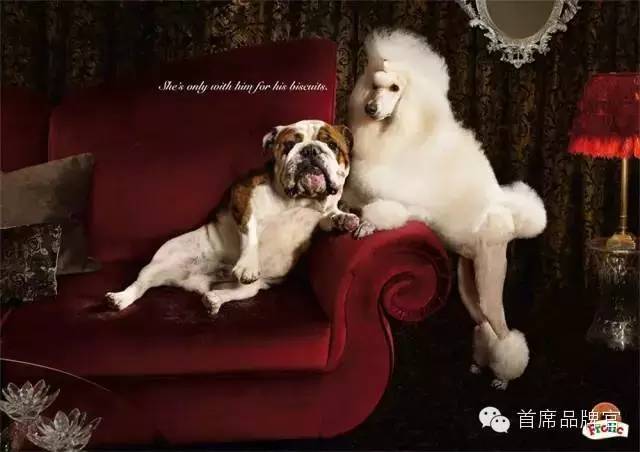 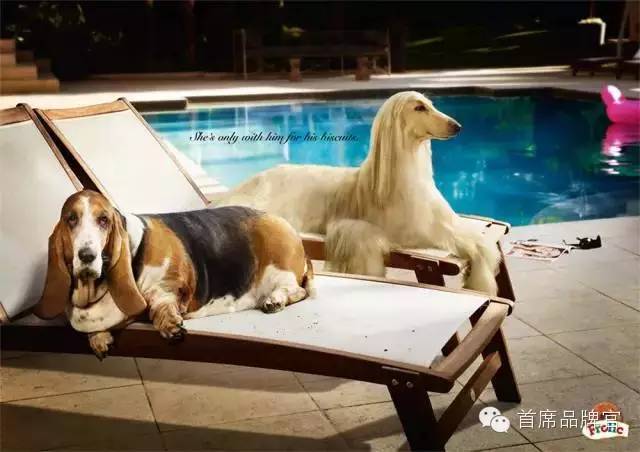 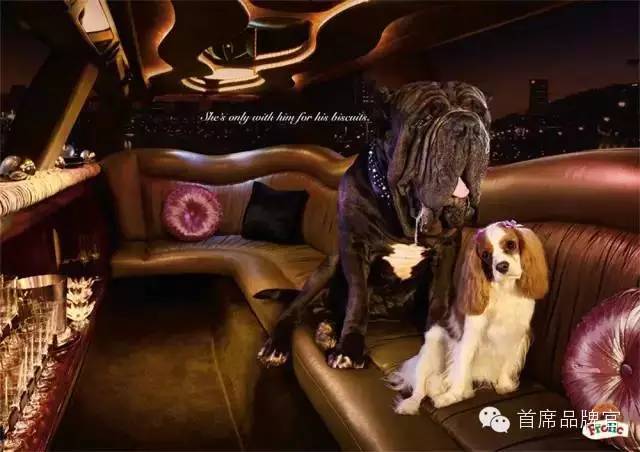 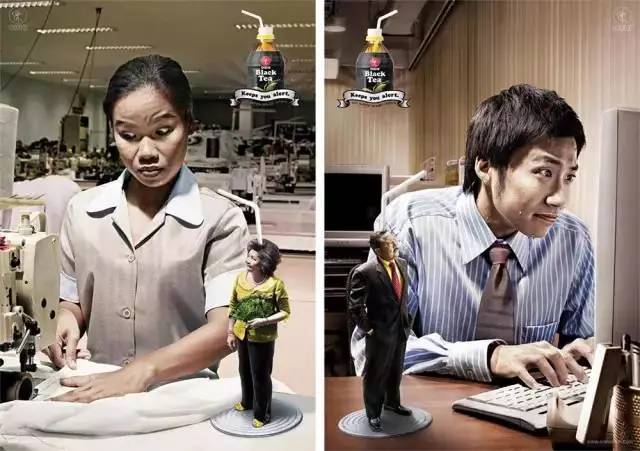 The fourth style of the creative treasure trove - metaphorical method

Metaphor is "for example". That is, grasping the similarities between two things of different natures and using one thing to make one thing a metaphor for another. The structure of a metaphor should generally consist of three parts, namely, the ont body (the thing to be compared), the metaphor (the thing to be compared) and the metaphorical word (similar point). The key to the metaphor: the metaphorical thing has no direct relationship with the subject, but at some point there are similarities with some characteristics of the subject, so it can be played by the problem, to carry out the extension transformation. 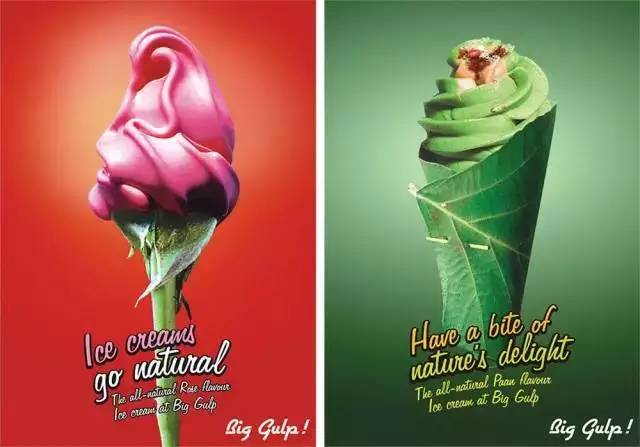 What's the purest taste like? Of course it's just grown, and BigGulp ice cream uses the most natural ingredients to make the most delicious food. Compare the product to a plant with a corresponding taste to prove that we are original.

Ont: Create a metaphor: Zipper Similarity: ClosedWhat are the features of Trotable? Of course, healing the wound, but how can it reflect the wound can be afflyted to heal it, the designer likened the wound to a zipper, a little more intuitive.

The paint on the house will fall like the skin of an elderly person. This tragic fact prompts you: Be sure to paint with a wall paint!

WMF cutter - sorry, it's too sharp to control. Doesn't the customer want sharp? Then don't be satisfied with cutting vegetables to cut meat, people cut off the knife board to show you.

The advent of the Internet era makes brands in marketing activities to constantly create new forms of communication to meet the growing needs of brands, there will be H5 pages and social marketing and other ways, these are either interactive or funny communication methods than the simple plane than before more easily attract the user's attention and participation.

So how does traditional advertising evolve to adapt to this new era and continue to catch the eye of its own audience? I still have a big trick. It's hard to keep your audience from paying attention to such ads.

The so-called environmental media advertising, can be said to be the upgraded version of traditional print advertising, and the point of upgrading is that it will be the traditional print advertising and the surrounding environment clever combination, in the product characteristics and information carriers to find a perfect combination of points, with unique, break the inherent concept of creativity to attract the attention of the audience.

The killer of environmental media is actually to stimulate users to actively spread, so that brands and users interact with each other. The user as a channel, let the user feel, to participate, unknowingly accept the brand. Thus formed a brand hobby and brand identity, after which consumers will naturally buy the brand's products. Each design that inspires users to take photos and send a circle of friends can bring you a new round of communication.

Berger Paint Ads: Berger Paint is very powerful, so that your work and the blue sky into one. Natural color, since it is wonderful. 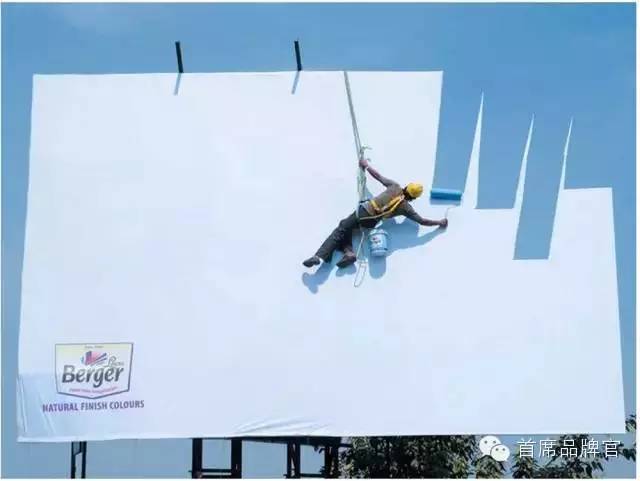 Yoga training ads - real-life very common beverage straws or posters after some small modifications, immediately became a good idea to reflect the brand's appeal. Perhaps the sexiest thing about creativity is making small changes to a life that would otherwise be the same every day.

Attach the MINI body to the tunnel entrance and exit, far from it looks as if many people are in and out of the MINI car, you can see how spacious its carriages are!

Cleverly combining billboards with wires, are you still afraid to trim this dangerously sensitive place? Such billboard bezels are really eye-catching for passers-by. 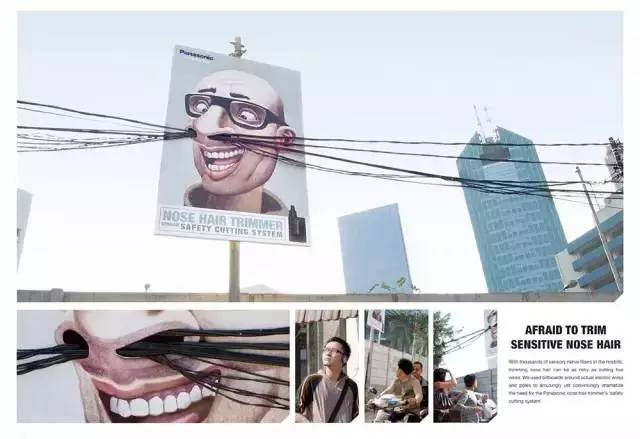 Bubblegum advertising, self-created carrier, combined with the product functional characteristics of the exaggeration, at this time the creative has a strong interactive and sensational effect, the work itself revealed a very strong radiation force, so that pedestrians, and talk about a lot. Creating a sensation has attracted a lot of attention, which is the charm of "environmental media". 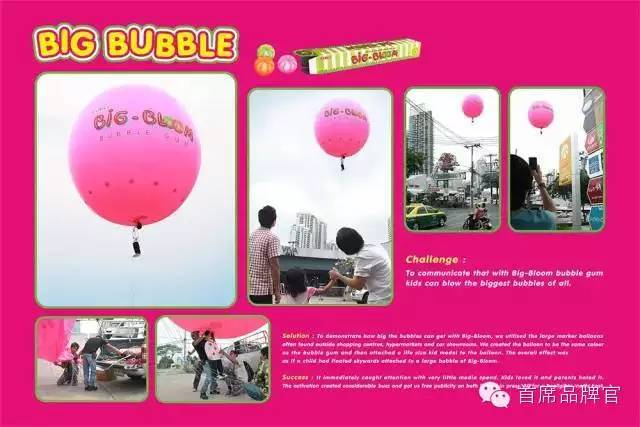 Skydiving is different from the amusement park roller coaster, dare to experience the sport after all is a minority, then skydiving is what kind of feeling? Many high-rise shopping malls or office buildings have high-altitude glass elevators, secure hard, fully transparent floors, and walk up and tremble and spectacular. This is not, the idea came, is not to simulate the high-altitude fall feeling, all through the glass elevator can do, if you want to be more exciting, come to our skydiving school! 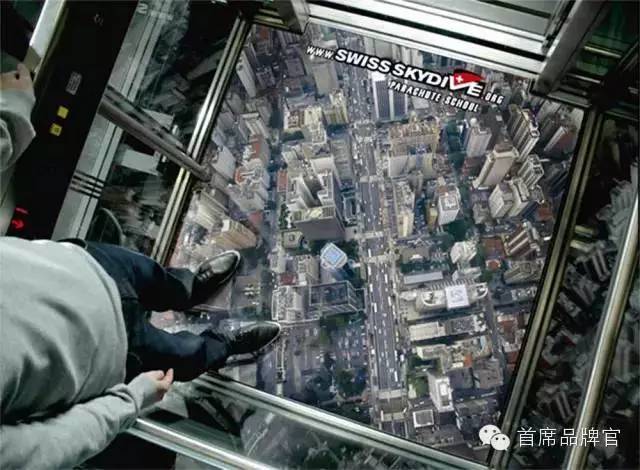 Blizzard online game World of Warcraft new material film "King delano" online. To build momentum for the documentary, Blizzard set up a live outdoor ad in New York's Times Square in the form of a 15-foot giant axe that was the blood-sucking weapon used by "Orc" Grom Hell. The occurrence of this "accident" made enough eyeballs.

In fact, there are a lot of creative ideas, I just listed a few more common print advertising creative methods and may be widely used in the future in the domestic environmental media, the times in progress, our creative thinking is constantly evolving. I hope this treasure trove can help you open up some ideas and make better works!

All right! Have you practiced your gods? Then meet the difficult demand side to be brave to shout out: 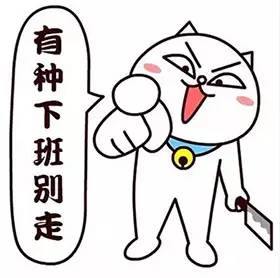