This year's growth in overseas e-commerce due to the outbreak is a well-known fact, data level, to the fastest growing U.S. market, for example, according to the U.S. Department of Commerce data, the U.S. online retail penetration rate reached 20.8%, almost the past six years of growth.

People are no longer surprised by some "exaggerated" growth figures, but what happens when such growth is specific to the real life of overseas people? When the author searched for the keyword "shopping online" on Twitter, he saw that the topic of the most tweets posted by overseas netizens was to tell me that he "can't stop buying online". 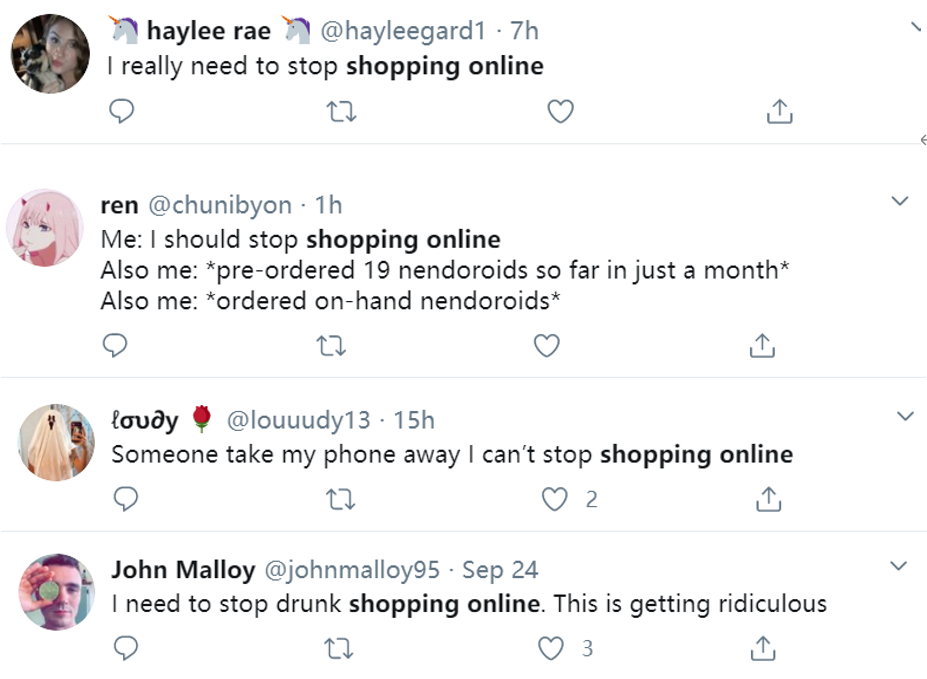 And the change of e-commerce industry as a whole, with it is the change of the user's specific behavior. Simply put, this consumer is not the wave of consumers you brought with you last year.

"Older people" are starting to shop, too

According to Facebook's latest white paper, Marketing Guide for the 2020 Shopping Season, before the outbreak, online shoppers were dominated by millennials and Gen Z young people.Many Gen X and Baby Boomers consumers are also moving to online shopping.

According to the survey, 44% of Gen X consumers and 30% of baby boomers increased their online shopping time during the outbreak. Another 43% of respondents said they would shop online more frequently after the outbreak. The further expansion of overseas e-commerce consumer groups will become a trend.

The survey also found two phenomena that exist in these two generations,One is their high dependence on messaging services.According to a survey of global consumers, the proportion of people interacting with merchants through messaging services increased by 8% between 2018 and 2019, while Gen X interacted with baby boomersThe largest increase was 37%.

It's also worth noting that these two generations are highly dependent on mobile shopping72% of Gen X consumers and 50% of baby boomers have significantly increased the length of mobile device usage during the outbreak. It's also important for sellers or e-commerce platforms to note that these two generations of older shoppers are not as painful as the younger generation when shopping on mobile devices. According to the survey, their biggest resistance when shopping on mobile devices is“The font is too small, "product information is difficult to view" and so on the elderly problem, merchants need to adjust for these pain points. 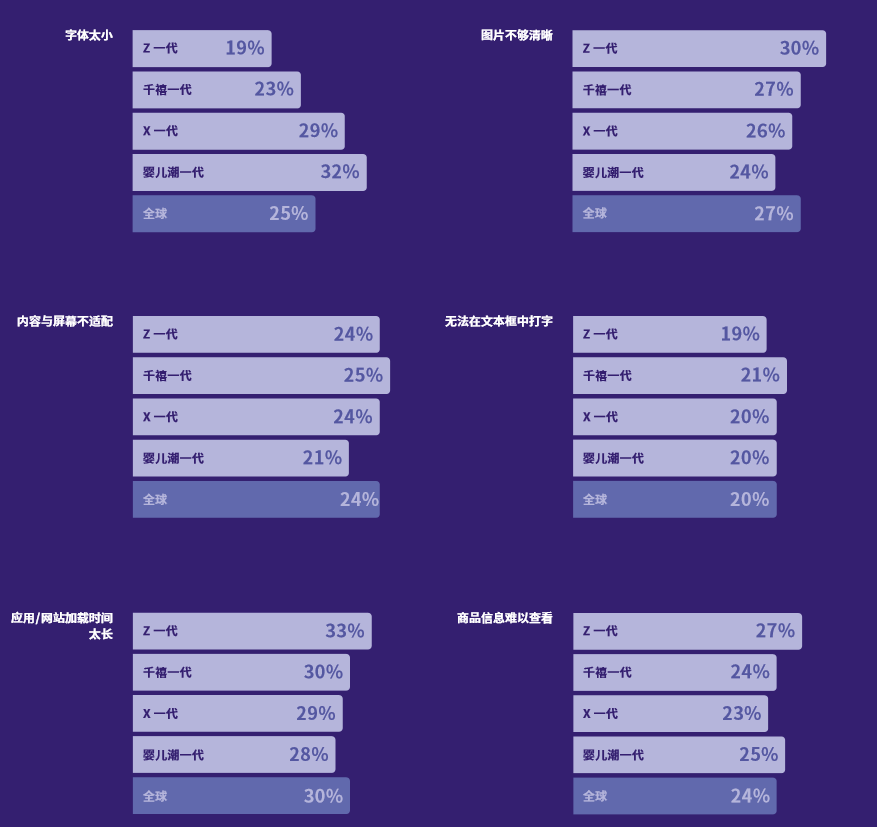 The holiday season in which you have experienced problems with your mobile device for year-end shoppingShopping.
The ratio of the . . Source:Facebook's 2020 Shopping Season Marketing Guide white paper

In addition to the changes in the consumer population, consumer behavior naturally changes.

People like to "taste the new" in times of the epidemic.

Although the outbreak has changed people's lives to some extent, people do not seem to be "losing" themselves in shopping. People in difficult economic times, but will buy some of the light luxury within their own accepted range as a way to vent.

According to a report by Zalando, Europe's largest e-commerce platform,Sales of skin care, manicures and hair care products increased by 300% year-on-year.The U.S. figures are similar, with sales of manicures on Amazon up 218 percent in the U.S.This domestic sellers should be aware that the outbreak should not be taken for granted to affect revenue, but to cancel the promotion and promotion of some high-priced goods.

In addition, the outbreak appears to have opened the door to a new world for some consumers, many of whom tried new things during the outbreak. Eighty-four percent of Chinese respondents said they had tried at least one new service during the outbreak. And consumers' appetite for this is likely to be stronger at the end of the year, as a survey of shoppers around the world during the holiday season shows thatSixty-four percent said they would prefer to try new items during the holiday season.At the same time, overseas goods appear to have a larger market during the promotional season, with respondents spending an average of 50% of their money on non-domestic goods during the promotional season.

The outbreak is related to a large chemical reaction

Outbreaks have a significant impact on consumer groups and consumer behavior, and when the driving force of the outbreak meets the urge, a better chemical reaction may be produced.

According to the survey,Globally, 43% of respondents expect a significant impact on their personal financesIn this case, people's "greedy and cheap" psychology will also be stimulated, shopping during the promotion period has become a natural choice. In fact, this year some e-commerce platform's big promotion results also proved this. Shopee, for example, has placed 185 million single-quarter orders in Indonesia under the influence of Ramadan this year, with an average daily order volume of more than 2 million.This is up 122.6% year-on-year.

Percentage of consumers around the world who prefer to shop during promotions in 2020
Source: Facebook's 2020 Shopping Season Marketing Guide white paper

At the same time, sellers should pay attention to a large number of shopping during the rushConsumer groups have two characteristicsFirst, the proportion of high-income people is high, and 20% of the consumers surveyed on The Day are high-income or heavy consumers. In addition, in terms of age structure, generation Z and millennials make up the vast majority of consumers who shop during promotions, but given that the epidemic is driving the spending habits of many older consumers offline,The proportion of consumers in Gen X and baby boomers is likely to increase compared to previous years.

From Q4 this year until January next year, there will be a number of big events and marketing opportunities. The following from the marketing promotion of the early and late two angles to the seller a few specific recommendations.

Consumers are more sensitive to which ads

First of all, do a good job of branding and creative optimization of the combination. After more and more sellers attach importance to branding, branding in advertising transformation is also really becoming an effective lever. For example, the addition of visual identification in creatives that can represent the corporate image can enhance the brand's recognition and improve conversion rate. This may be a sharp weapon for advertising to stand out from the crowd during the rush. According to a survey of nine facebook Creative Shop customers,The seller's ad conversion rate increased by 67% after brand visuals were added to the creative.

The creative adds a before-and-after comparison of visual identities

In addition, merchants can also analyze the needs of the audience on the basis of different consumers to add personalized consumption incentives of the creative material. For example, for consumers who want to get more kinds of goods from the brand, the number of kinds of goods can be displayed in the creative, for those who are accustomed to buying offline, you can put the word "package mail" in the creative, highlighting the advantages of online purchases do not need to go out and do not have to pay extra shipping costs.

Data is new oil, available in all industries, on Facebook
The latest white paper explains the latest behavioural changes for overseas consumers

The after-marketing of the big push is just as important

In addition, many sellers will end their marketing investment after the event is over. But in reality, the end of the push is an opportunity for some sellers to build stronger relationships with their consumers. According to Facebook,45% of consumers worldwide continue to shop after the end of the Christmas promotional seasonand continued into the January promotional season.And the cost of running ads has fallen over this period of time, sellers can use this period of time to focus on the promotion of mid-season buyer feedback on the goods, so as to build a good brand image. Of course, these are just some of the suggestions for marketing on Facebook, and there must be a lot of sellers who want to systematically understand how to take advantage of the Facebook platform during the rush. In this regard, Facebook released four reports to explain to sellers about new consumer developments in the outbreak, notes on marketing promotions during the high season, and practical examples and guidance on how to use Facebook's co-ad. 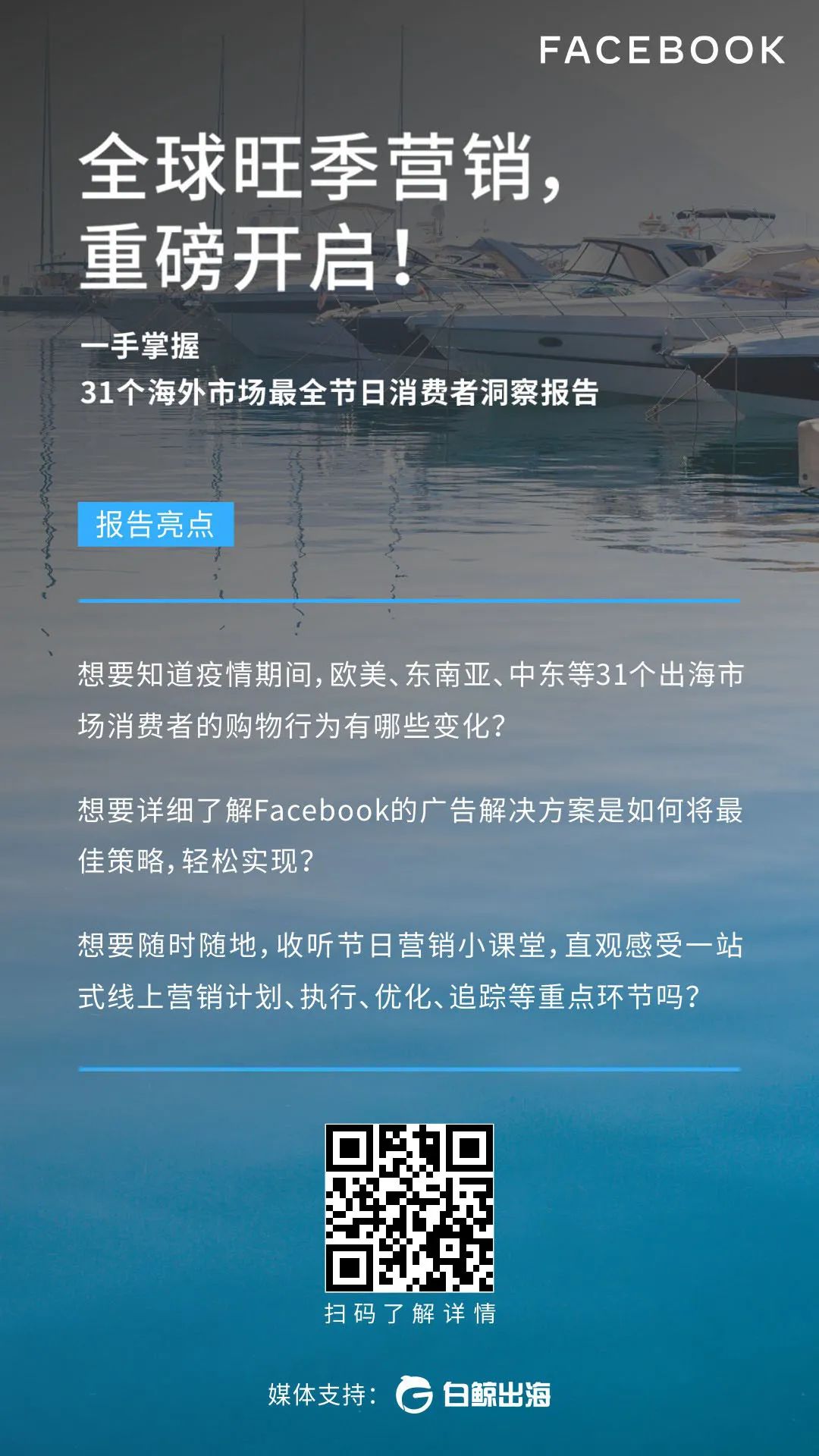 Will audio be the next darling of the social circuit? 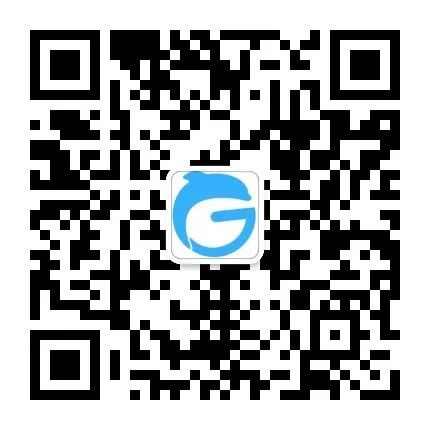 Press and hold the picture to sweep the code

2020 Shopping Season You're not dealing with the original consumers (with Facebook's latest shopping season white paper)
Up to 200 words, currently totalWord.

Tencent: Wechat users in Australia are not subject to Chinese law
Dodo more cut price mutual aid free (free group 2020)
Likes, content recommendations, input... How does the addictive design of social networks manipulate our lives?
10.14 The Economist is studying hard Can Weibo do better than Twitter?
"What kind of onion are you when you're so ugly and you're a model?"