The first scheduled new film was released, with cinemas returning to work on July 20; the 315th party featured headlines and headlines; and Twitter suffered the biggest hacking attack in history.

This week (2020.7.11-7.17) Worthy of attention in the entertainment hot news:Cinemas in low-risk areas will resume operations on July 20; the first new films will be released after the cinema resumes; the headlines will be named by CCTV 315 times and exposed for allegedly publishing false advertisements; lawyers will sue Ai Qiyi for invasion of privacy after the on-demand case; Beijing Universal Studios will be capped for trial operation in the first half of 2021; Shanghai International Film and Television Festival will be held in July 25, 2020; and the founder of Twitter has been arrested.

Cinemas in low-risk areas will resume on July 20.

At noon on the 16th, the official website of the National Film Administration issued an announcement. The announcement pointed out that low-risk areas in the cinema under the premise of effective implementation of various prevention and control measures, can be orderly on July 20 to resume business. Medium- and high-risk areas are closed for the time being.

In addition to the notice to reopen, the National Film Administration has issued guidelines for the prevention and control of the resumption of the opening of cinema venues. The guide said that all ticket purchase methods to take the network real name reservation, no contact ticketing, the implementation of cross-seat ticketing, to ensure that unfamiliar audience distance of more than 1 meter, each seat rate should not exceed 30%.

The national standard for the custody of minors in the game has been officially opened.

More than 22,000 new gaming companies were added in the first half of the year, an average of 122 new ones per day.

Tian eye check professional version of the data show that China currently has about 260,000 business names, business scope or brand names with "games." In terms of geographical distribution, the top three provinces in China for game-related enterprises are Guangdong, Jiangsu and Hubei. Among them, the total number of game-related enterprises in Guangdong Province is nearly 90,000, accounting for 34.6%. Based on the industrial and commercial registration, China added more than 22,000 new gaming enterprises in the first half of this year, an average of 122 new ones per day.

The first new films will be released when the cinema resumes. 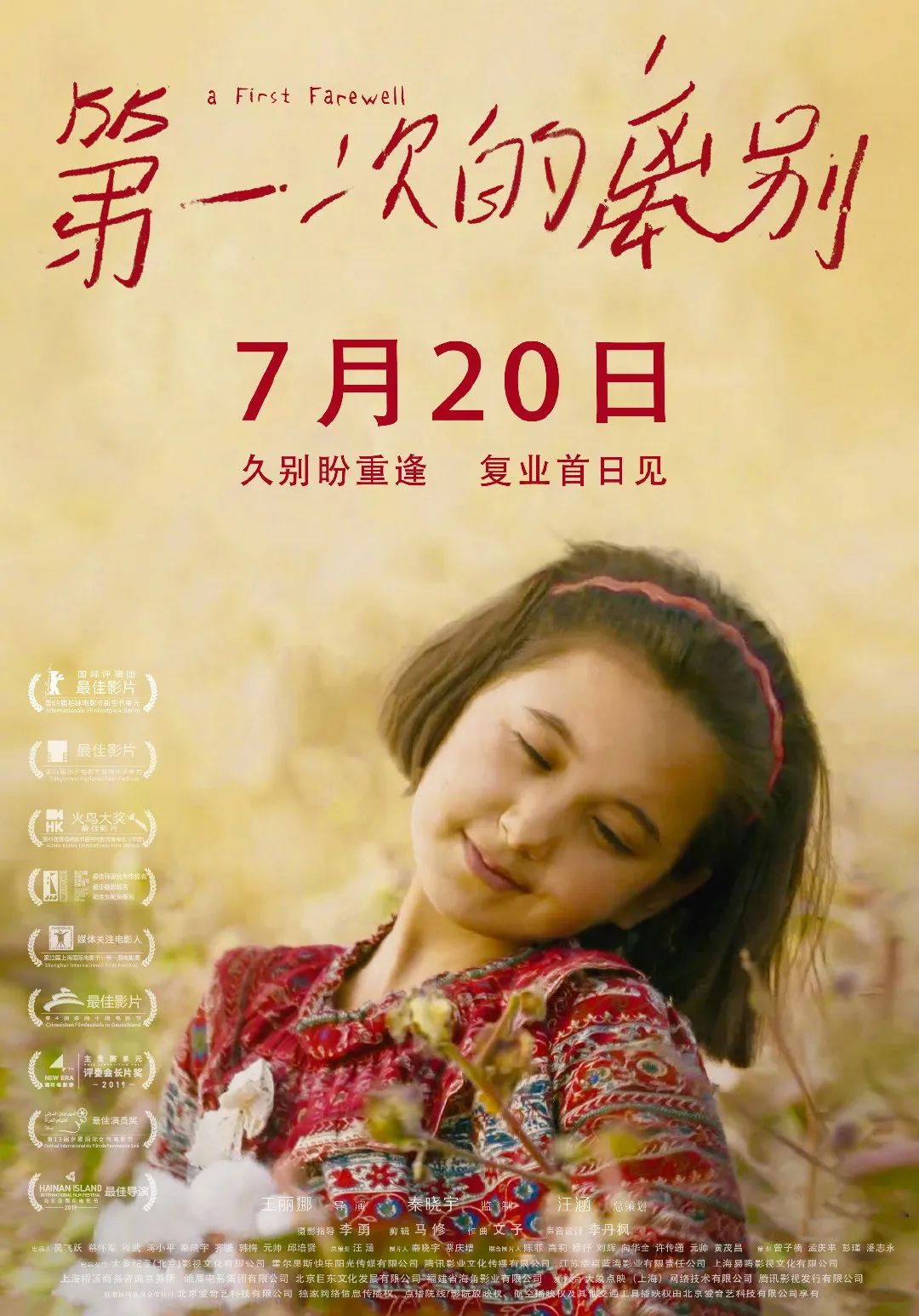 The elephant dots the official micro.

Funny headlines were named by CCTV 315 and exposed for allegedly publishing false advertisements.

On the evening of July 16th, CCTV 315 party exposed the funny headlines advertising chaos, CCTV reporters found that without providing any qualifications, online earning ads can easily get on the fun headlines, gambling platform can "cross-dress" to evade supervision. After being named by the March 15 party, the search found that the fun headline APP suspected of being off the shelves in major Android app stores, including Xiaomi App Store, App Bao, etc., but the Apple App Store has not yet been off the shelves.

On the morning of the 17th, fun headlines issued rectification measures through Weibo, saying that from now on to carry out a comprehensive verification and rectification of the platform advertising alliance agents, strictly regulate the agency cooperation mechanism and process, the agents in question immediately stop cooperation; 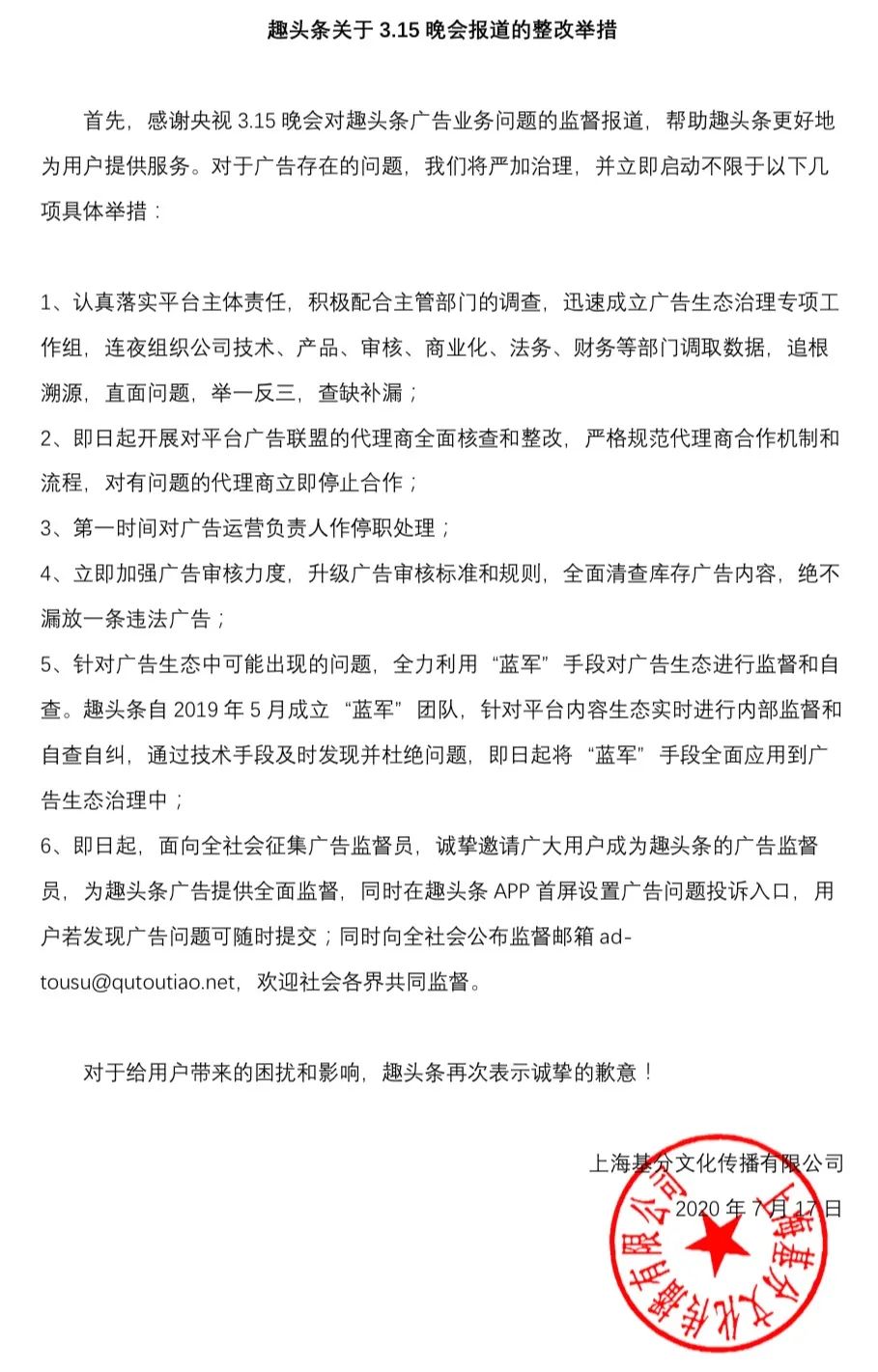 After the on-demand case, the lawyer sued Ai Qiyi for invasion of privacy.

On July 15th, the plaintiffs in the forward-on-demand case again sued Ai Qiyi, saying that Ai Qiyi had taken out nearly 100 pages of personal movie-watching records during the trial and felt that privacy had been seriously violated. On the 16th, Aiqi arts officer posted a response, saying that all information submitted is in accordance with the relevant regulations and litigation needs, only provided to the court. In order to protect the privacy of the parties, also applied for non-public certification. Ensure that no information is disclosed or made public. 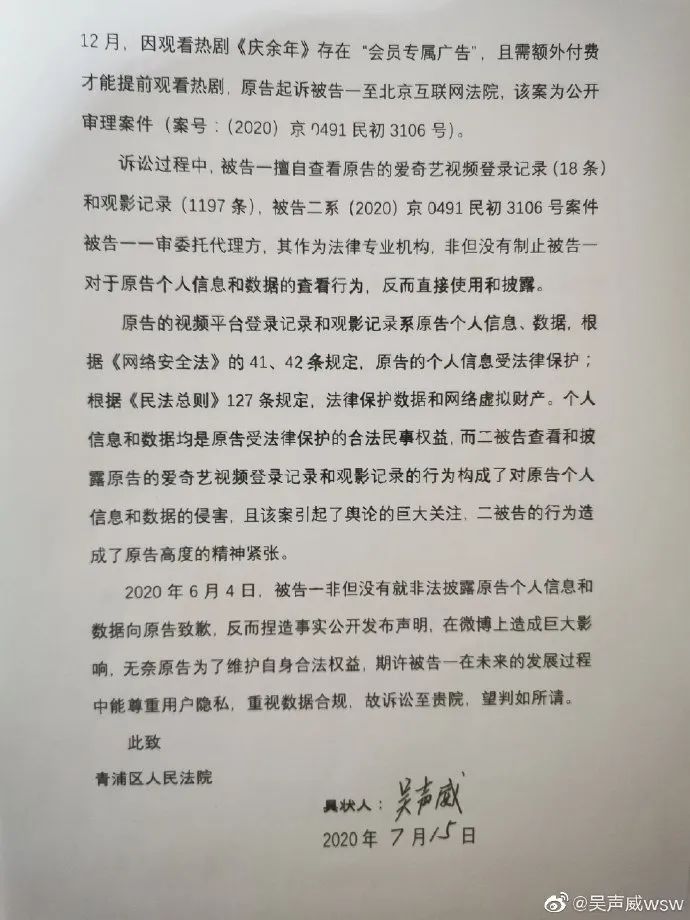 Source: Shanghai TV Festival Official Micro.
The registered capital of fast-paced affiliates increased to $2 billion.
On July 14, Beijing Dajia Internet Information Technology Co., Ltd. under changed its registered capital from about $1.4 billion to $2 billion, an increase of 42.66 percent, according to Sky Eye. Beijing Dajia Internet Information Technology Co., Ltd. was established in July 2014, the legal representative is fast-hand co-founder Yang Yuanxi, the company's business scope includes computer hardware and software, network technology and so on. At present, the company has a number of foreign investment enterprises, including Beijing Express Advertising Co., Ltd.

July 15 (UPI) -- South Korea's Communications Commission (KCC) said in a statement that TikTok was fined 186 million won ($155,000) for collecting data from children under the age of 14 without parental consent and transferring users' personal data overseas without notice.

According to a press conference held at the Beijing City Vice-Center on the morning of the 16th, green heart "three major buildings" and other projects at the end of June began the main structure construction, underground sharing facilities synchronous construction. Universal Studios project has now achieved structural capping, into the riding and performance equipment installation and commissioning phase, and strive to be completed by the end of the year, the first half of 2021 will be put into trial operation, the official opening of the park at some time.

The 2020 Shanghai International Film and Television Festival will be held from July 25. 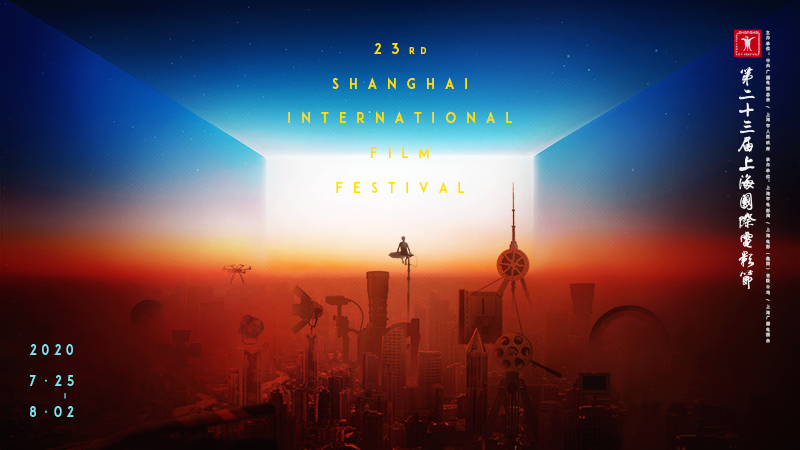 On July 15th, local time, Twitter suffered the largest hacking attack in its history, with several well-known Twitter accounts blacked out for Bitcoin scams. It is understood that in the black incident, many U.S. political and business leaders' accounts were hijacked by hackers and published cryptocurrency scams. Prominent figures affected by the incident include former US President Barack Obama, Tesla CEO Elon Musk and Microsoft founder Bill Gates.

Wanda Films announced that it expects a first-half net profit loss of 1.5 billion to 1.6 billion yuan, compared with a profit of 524 million yuan a year earlier. More than 600 domestic studios under the company have been closed since January 23, 2020, and overseas studios have been closed since the end of March 2020, while films such as "Chinatown Detective 3" controlled by the company's main cast have not been released as scheduled, some film and television productions have been delayed, and the company's operating income has dropped significantly from the same period last year.

Jinyi Film and Television: It expects a net loss of 310 million to 390 million yuan in the first half of this year.

Jinyi Film and Television announced that it expects a net loss of 310 million to 390 million yuan in the first half of this year, compared with a profit of 55.1906 million yuan in the same period last year. Affected by the outbreak, the reporting period, in accordance with the epidemic prevention and control and industry regulatory requirements, from January 24, 2020, the company's nearly 200 direct-run cinemas and Guangzhou Jinyi Pearl River Cinema Line Co., Ltd. more than 200 franchise cinemas were suspended, as of the end of the reporting period has not resumed business, directly affecting the company's operating income.

Feng Wei, a former senior director of Ali and one of the world's e-race leaders, has joined the byte beat.

According to Caijing Graffiti, Feng Wei, a former senior director of Alibaba and one of the world's top e-race leaders, recently joined byte-beating. During Ali's tenure, one of Feng's most important jobs was to participate in the operation of the WESG Event (World E-Sports Games), a comprehensive e-competition launched by Ali Sports in 2016 with an average annual investment of RMB150 million.

D station founder was arrested, because of the site infringement to play more than 200 animation works.

According to the Public Prosecutor's Office, without the permission of the right to the case, Zheng, Lin from other animation sites copy animation resources to D station for free playback and provide download; By the end of the case, D station played more than 200 infringing animation works (more than 3000 episodes), including "the super-capable daughter of the undersecond" "Dragon King's work!" "Son of Chaos" and other popular Japanese animation works.

The overseas rights to the "Travel" movie were purchased by Netflix.

On July 14th the film's publisher confirmed that Netflix, the global pay-per-view streaming platform, had bought the film's overseas rights to be released globally, according to the giant's website. That means the film will be the Chinese mainland chinese-language film in the history of chinese-language cinema to be synchronously synchronous around the world, the sources said.

The Journey movie was adapted from giant network's classic game of the same name IP. The film was jointly produced by Ali Film, Giant Pictures, Star Film and China Film, with a total investment of nearly 300 million yuan.

Bank of China Switch update, WeChat friends can add friends to each other.

On the 14th, Tencent's official NintendoSwitch microblog announced that a new update to the Nintendo Switch 10.1.0 system has added new features to make it easier for WeChat friends to add NS friends to each other.

The Group completed the issuance of HK$100 million of convertable bonds.

The Group announced that all preconditions for the issuance of two series of convertable bonds with a total capital of HK$100 million to Poly Platinum Limited (Investors) had been met and completed on 14 July 2020, after which convertable bonds had been issued to investors in accordance with the terms and conditions of the subscription agreement.

The first scheduled new film was released, with cinemas returning to work on July 20; the 315th party featured headlines and headlines; and Twitter suffered the biggest hacking attack in history.
Up to 200 words, currently total.Word.