Throughout the 2017 advertising market, traditional media is being hit by the search for innovation, the life of the media under the line of rapid development. Among them, elevator advertising in this year to carry the girder, still maintain high-speed growth. Elevator advertising impact, audience concentration, causing mandatory attention to the properties, so that it in the era of fragmented audience energy to obtain a large number of offline traffic.In the past year, a large wave of brand advertising has been launched on the trendy elevator television,Here's a summary of those impressive elevator ads.

1
Suck your eyes with your face

This is an era of "look at the face", people with high face value bring their own halo. As a high-value representative of the stars, frequently for the major brands to speak up. When they appear on the elevator TV screen, is your attention being taken over by the star spokesman on the screen?

At the beginning of 2017, the hottest play must be "Three Lives III Ten Miles peach blossoms", the face value and popularity of the double burst of the aunt Zhao Heting has thus become the hearts of many female drama fans the perfect partner representative. He won the Beast pie and the little red book endorsement, because the "light cooperation" activities landed on the trendy elevator TV. "Photosynthesy" dominates the feeling of beauty around you, delivering positive energy, and the sun-filled male god shares positive energy with many fans through exquisite images and deep voices. 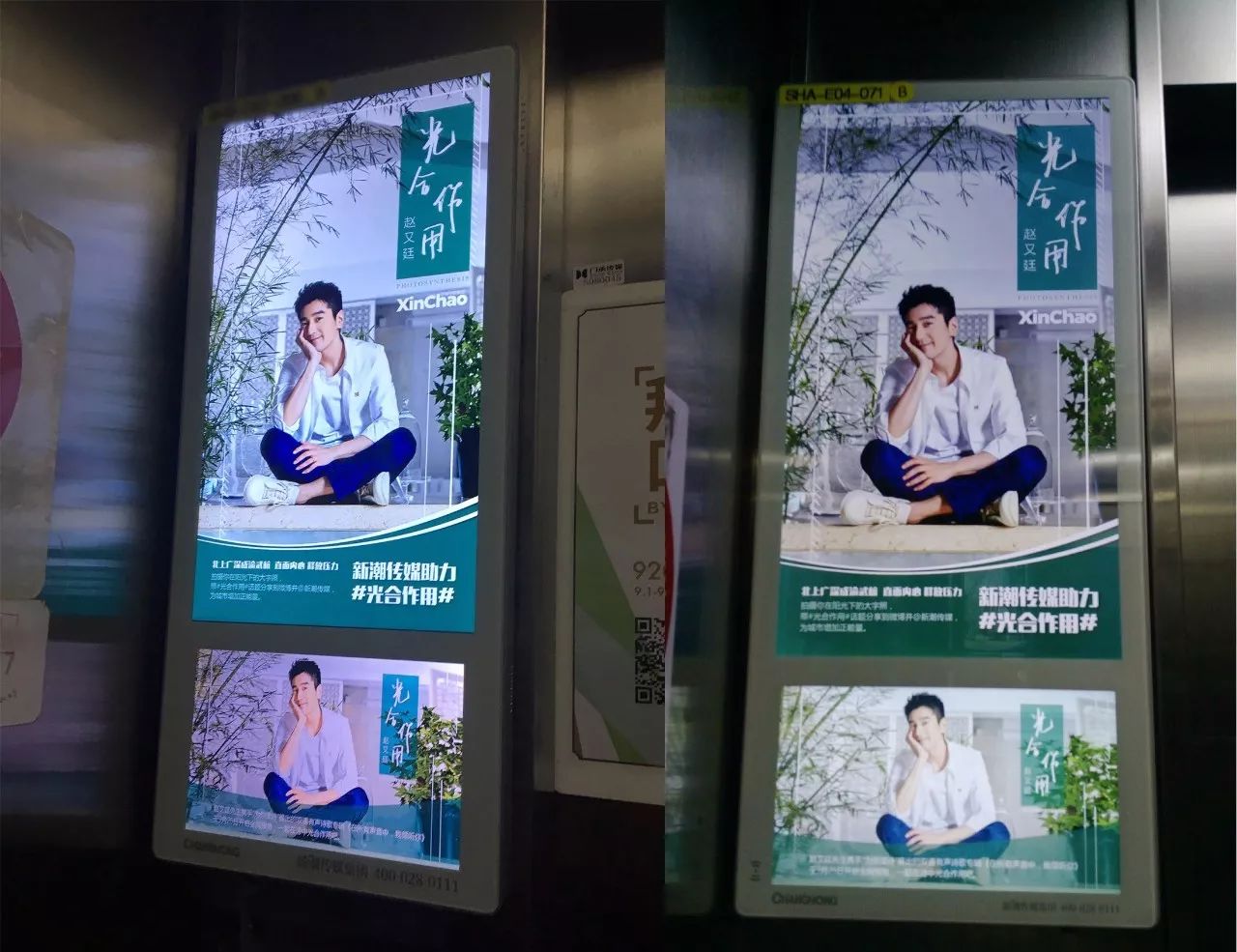 Make-up is generally looking for female stars to speak for, but in the era of small fresh meat, male gods have also begun to become the new favorite of makeup brands. In 2017, 20-year-old Liu Weiran appeared on the trendy elevator TV as a spokesman for Seveland, and once launched, he was the attention of many young girls, and taking a photo with his beloved little fresh meat in the elevator became the norm in the elevator. It can be seen that the high-faced value of small fresh meat has a strong ability to suck eyes. 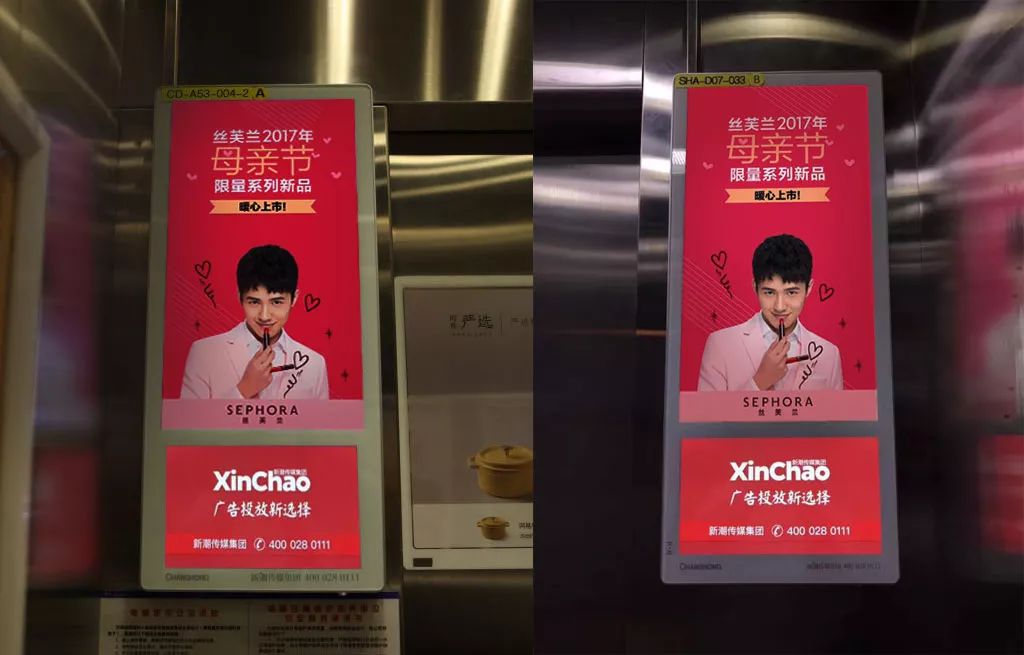 As a super popular beauty teenager, deer can be said to be the dream of thousands of young girls. "Deer Sports Season" as an annual fixed activity, in august this year officially returned and landed on the trendy elevator television. "Deer sports season" ultra-high attention combined with the trendy media huge offline traffic, so that the activities have been a strong exposure. "Deer Sports Season" launches interactive activities through elevator TV,to trigger the active participation of fans in the elevator,It's a new way to open up the way for stars to interact with their fans. 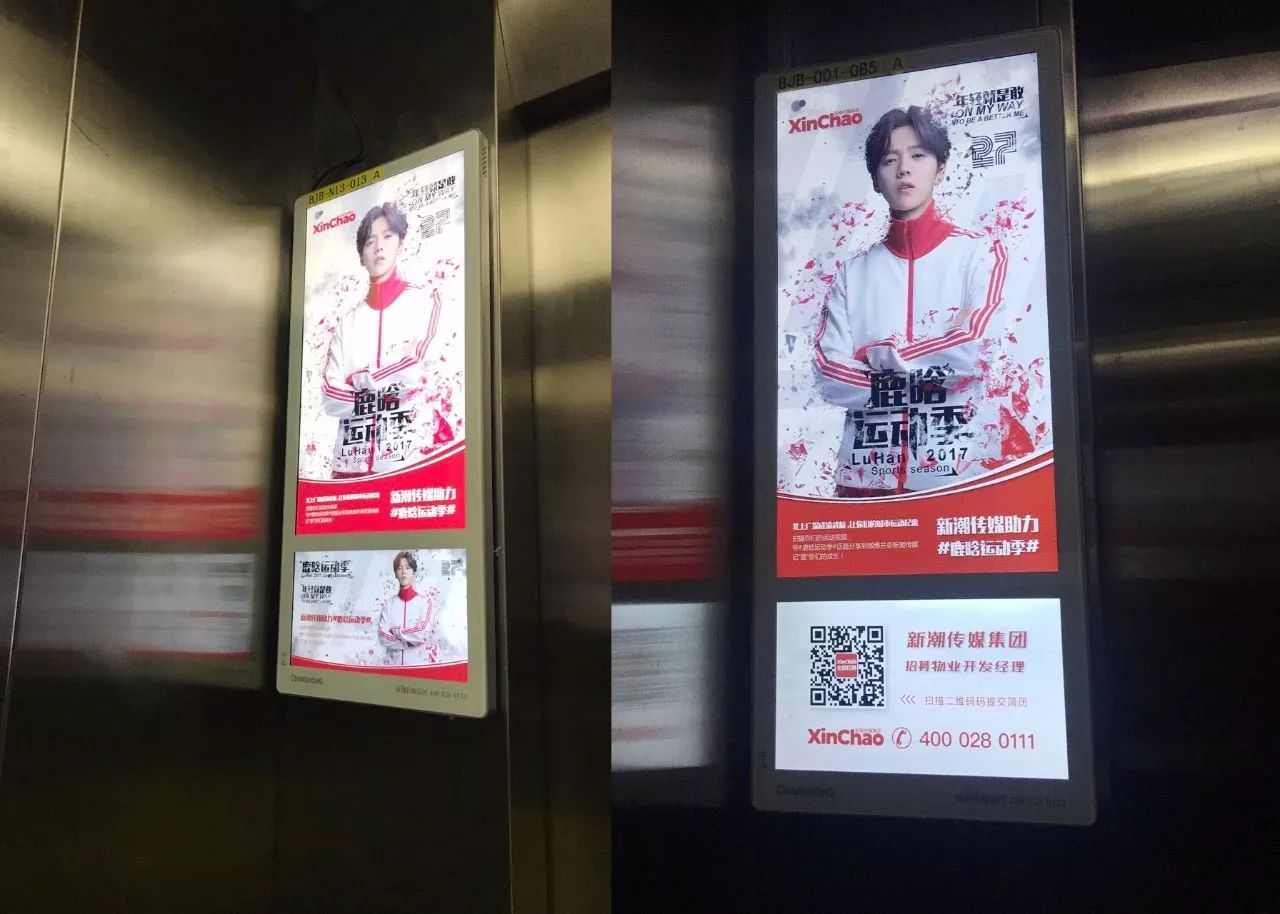 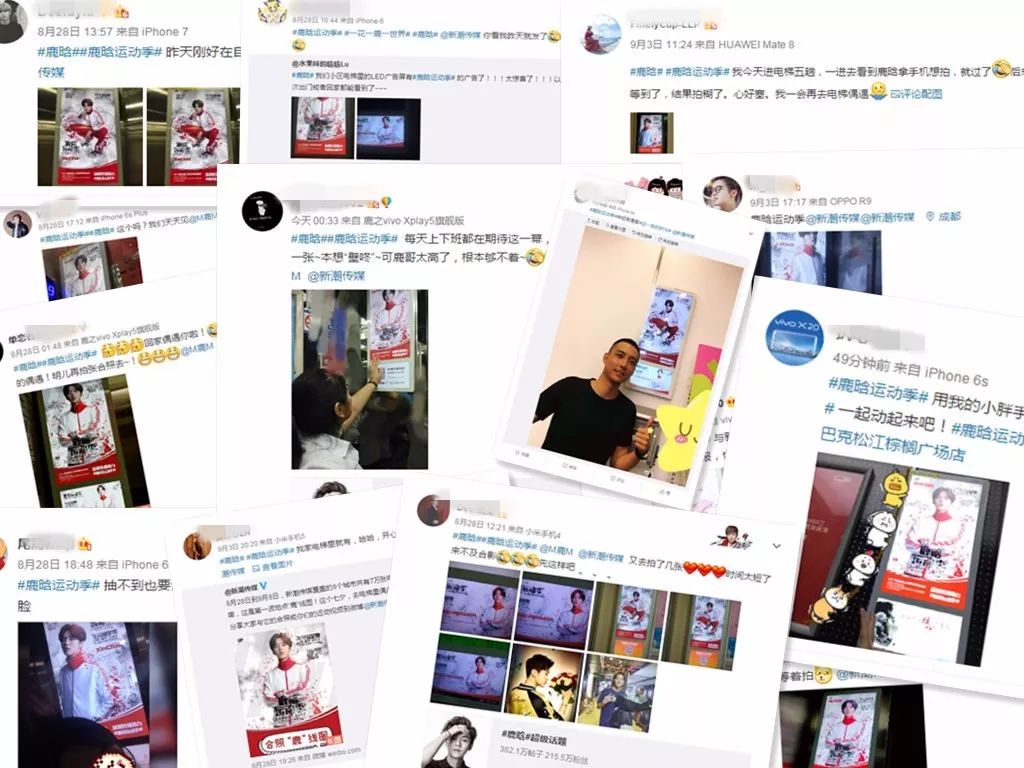 Freestyle was a mudslide in the summer of 2017 that quickly swept through the marketing battlegrounds of major brands. Taking advantage of the "China has hip-hop" a strong force, a bunch of brands launched a self-flying Freestyle ads, when they appear in the elevator, do not know whether you take the elevator with the TV ads shake up together?

Are you hungry× little Qinglong?

This summer in the elevator echoed a long-standing hungry freestyle ad, it is understood that the background music for the new single "Starving", composed by Xiao Qinglong song composition. The ad combines weekend scenes, with hip-hop rap, focusing on lazy culture, with the goal of certainly encircling young users and capturing the minds of the audience step by step. The melody is also very scratchy, even if the elevator TV display only 15 seconds, can let the audience remember "hungry in my phone." 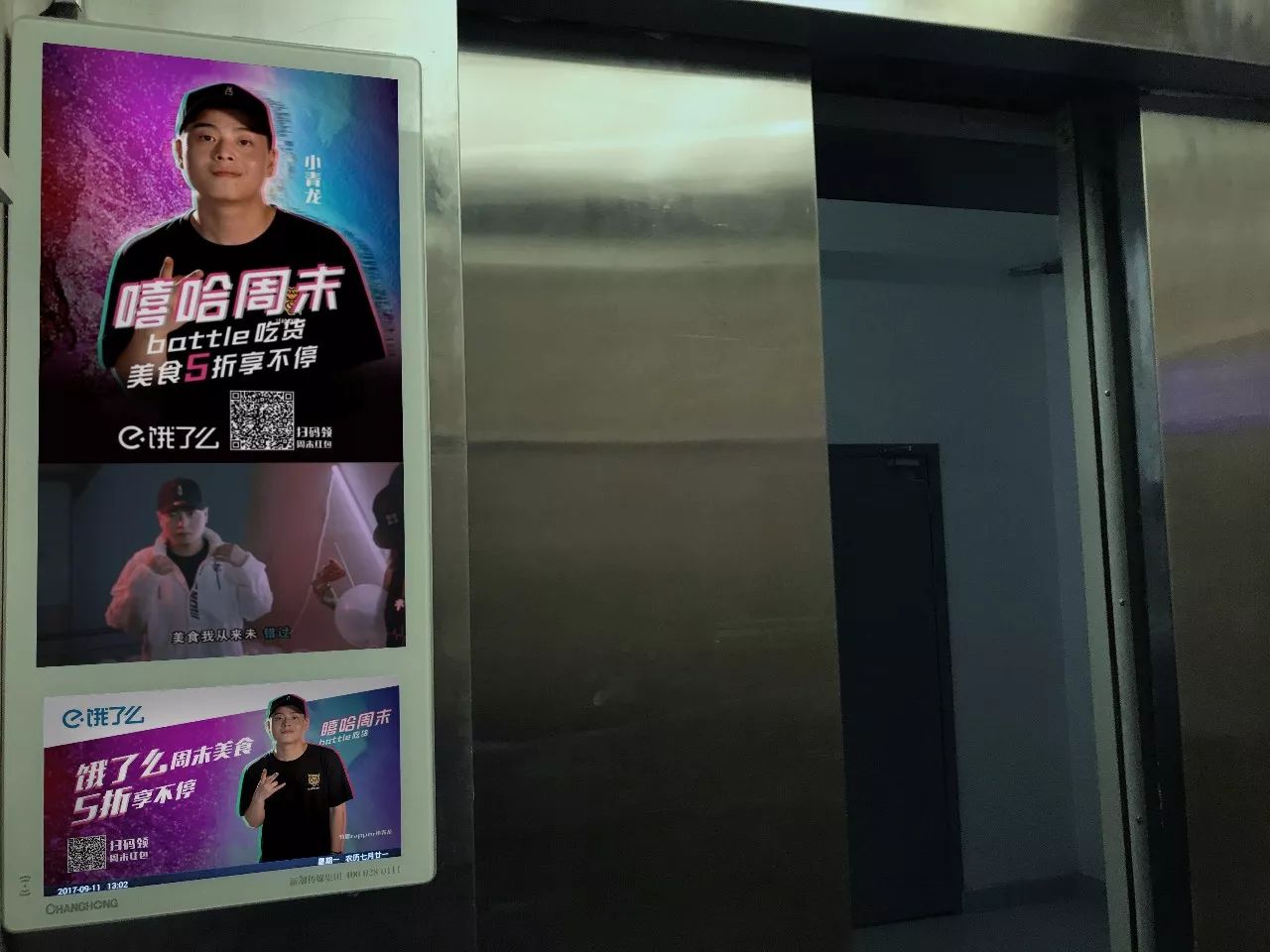 From "China has hip-hop" out of the super-popular rapper Huang Xu and VAVA, in the United States 70-year-old brand Vio Force launched a hip-hop music advertising. When this new dynamic TV advertisement appears on the trendy elevator TV, the rhythm is very strong, the content is clear, brainwashing speed, just 15 seconds in the space surrounded the audience's hearing and vision, forming an impressive memory point. 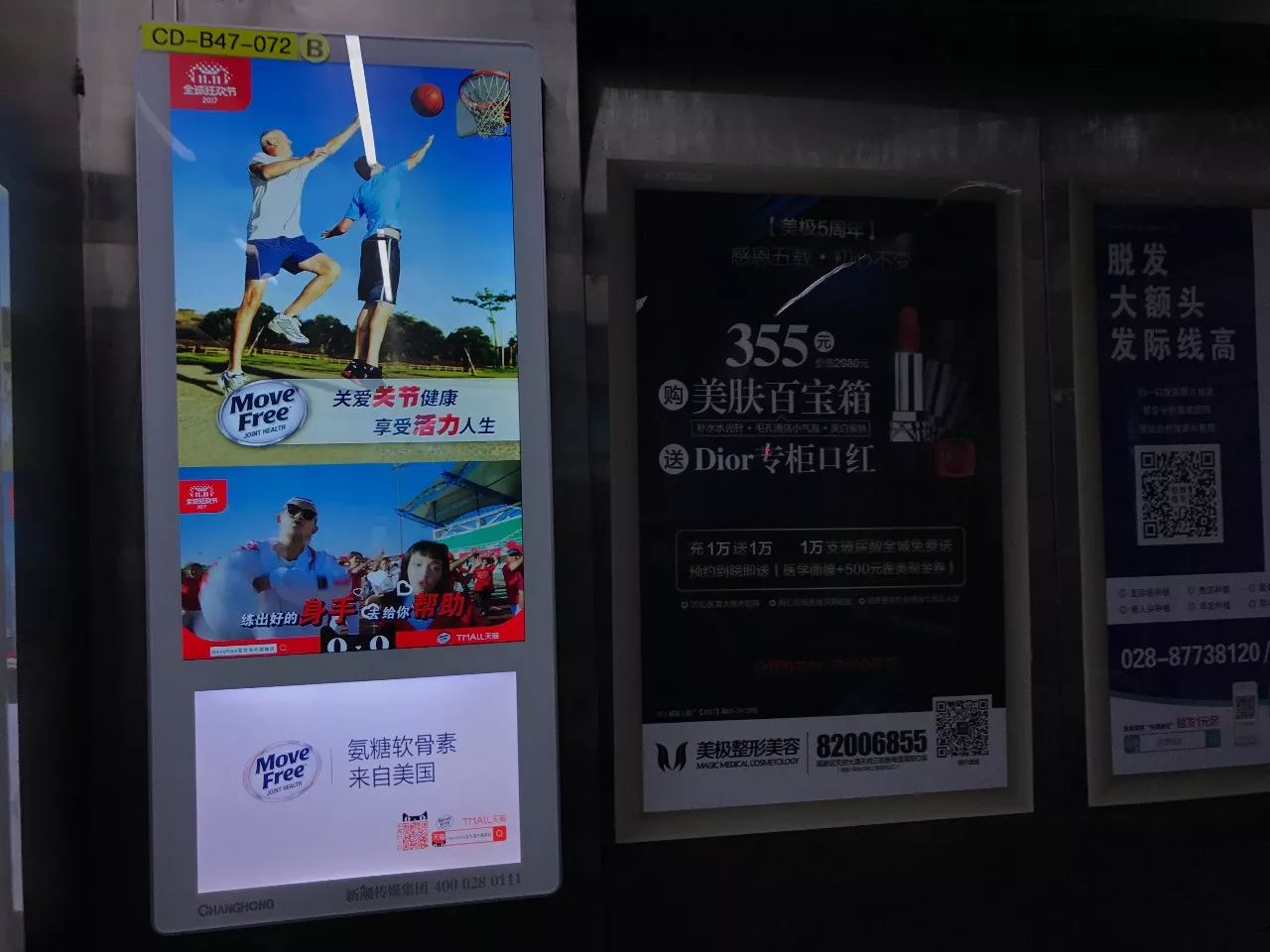 This year's Freestyle ad also has a style of painting, such as Ukip's magical short video ad. The ad, adapted from a classic piano concerto, repeats the "buy a house without an intermediary fee" voiceover three times in 15 seconds. With a picture full of visual impact, deeply attracted the audience by elevator, listen to a few more times can hum out. Simple and crude forms of advertising, coupled with creative voiceovers, have been successful in brainwashing. 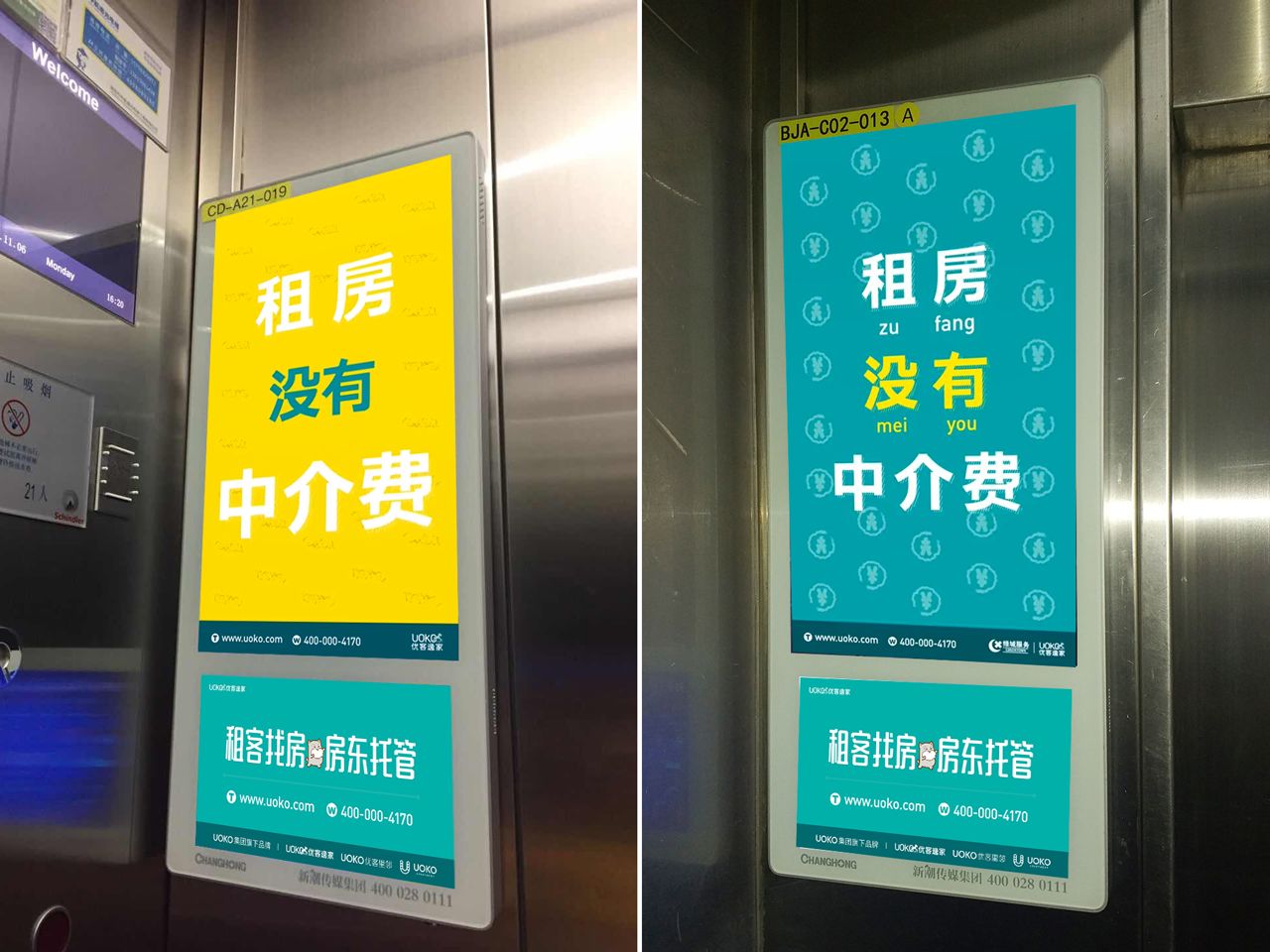 Content and communication complement each other, the heart of advertising coupled with precise channels, in order to achieve the coverage of effective people to maximize, in order to maximize the value of advertising, which is the same reason. Think back to the impressive elevator TV ads, interesting creative content and sound-painting synchronization elevator TV, promoting the advertising of television in memory to form an impression.

In 2017, Hu Ge served as Huawei Glory mobile phone spokesman, the first wave of endorsement ads to do is Huawei Glory 9 "good no words" series, this wave of advertising also simultaneously published the trendy elevator TV. The introduction of the "photo is too good to say", "sound quality is too good to say" two ads, full of creative expression and funny performance style, impressive. In the elevator display in a short period of 15 seconds, high-value, good creative advertising has achieved the effect of keeping the audience eye-opening. 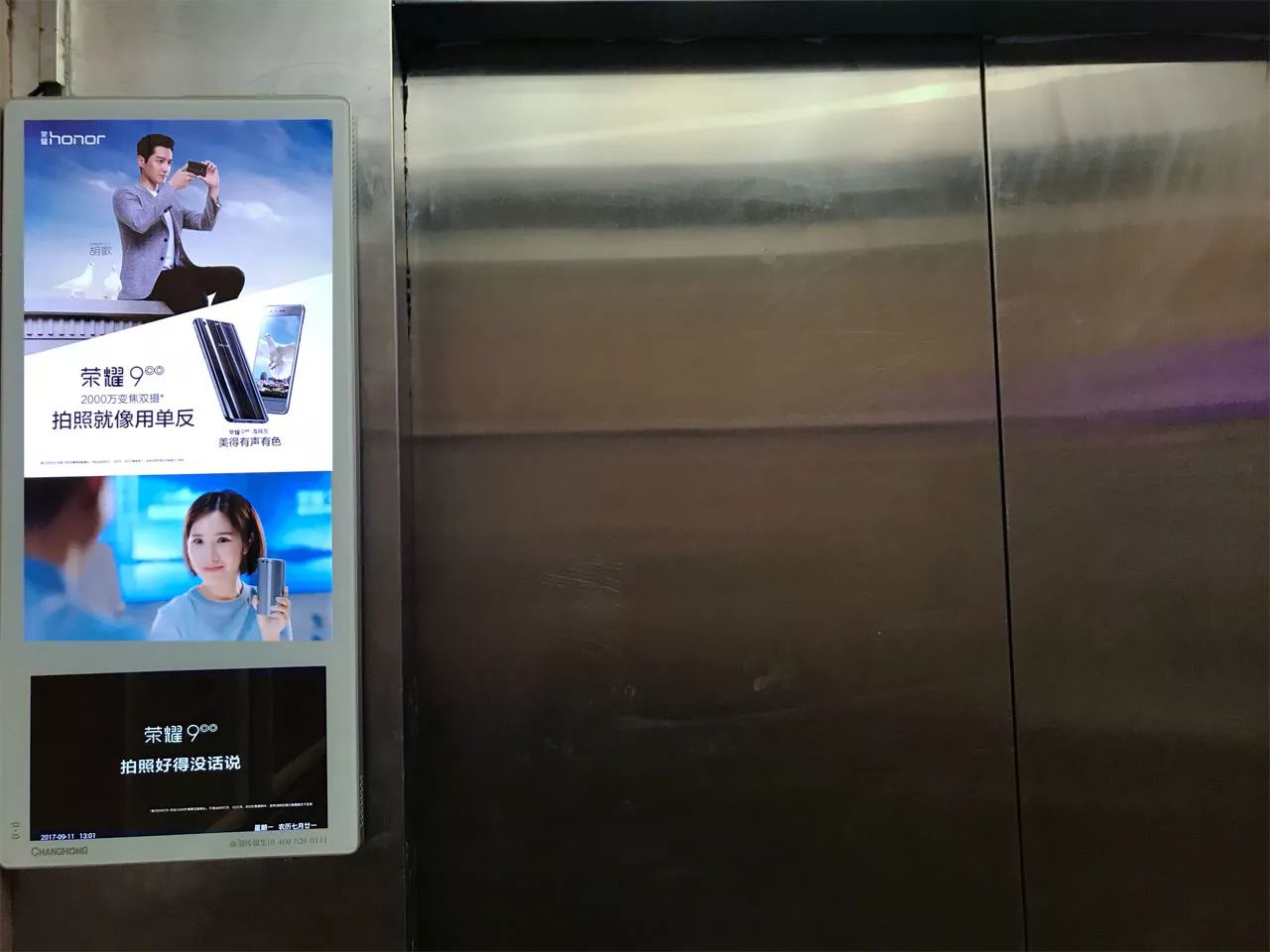 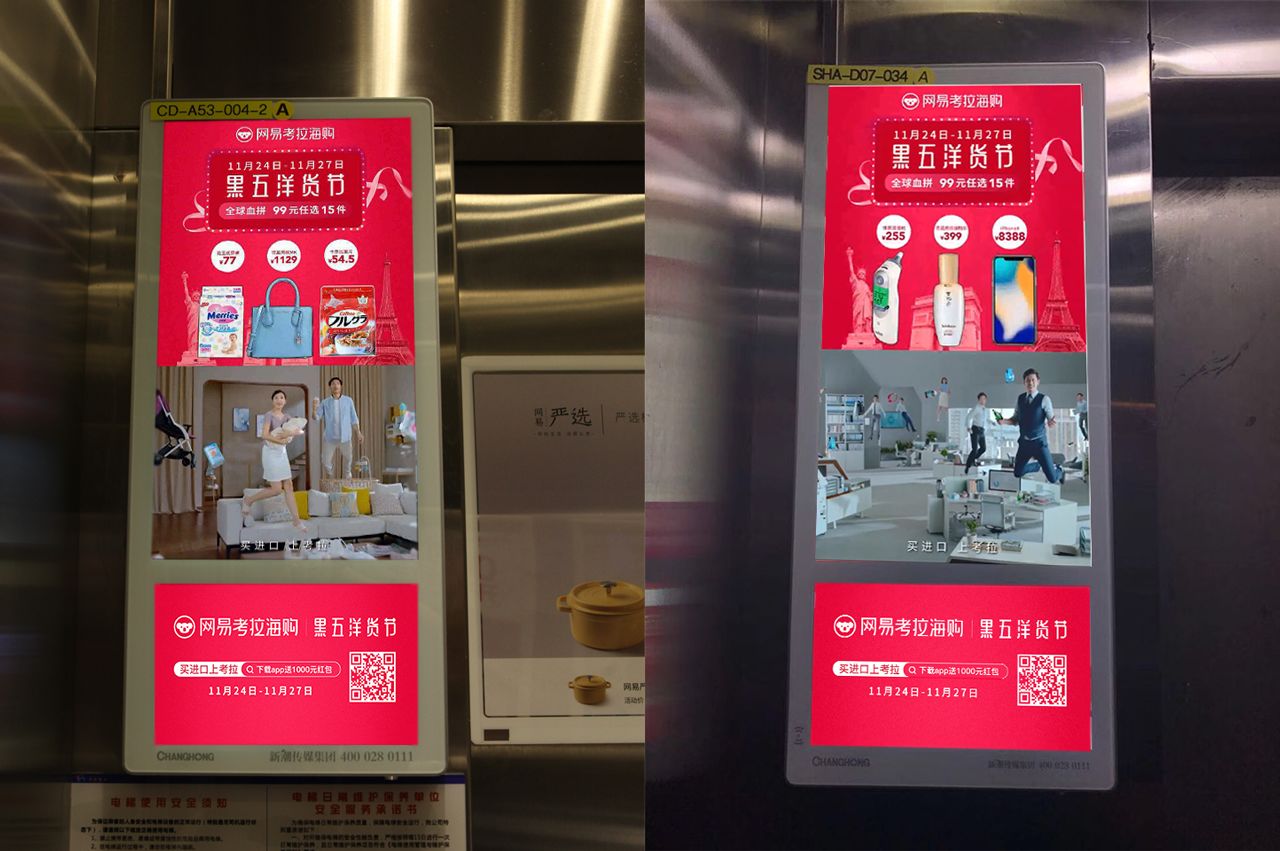 According to IP attributes and crowd positioning, the trendy media integrates online and offline resources, creates a new way for fans to get up close and personal with Elf Bao can dream online, makes life circle media full of fun, strengthens the connection and interaction between the audience taking the elevator and the TV screen, and improves the boring definition of the elevator space. This trendy media and "Elf Baoke Dream" big movie cross-border cooperation, through secondary dissemination of classics or hot works re-interpreted, inadvertently touched everyone's inner memory point. 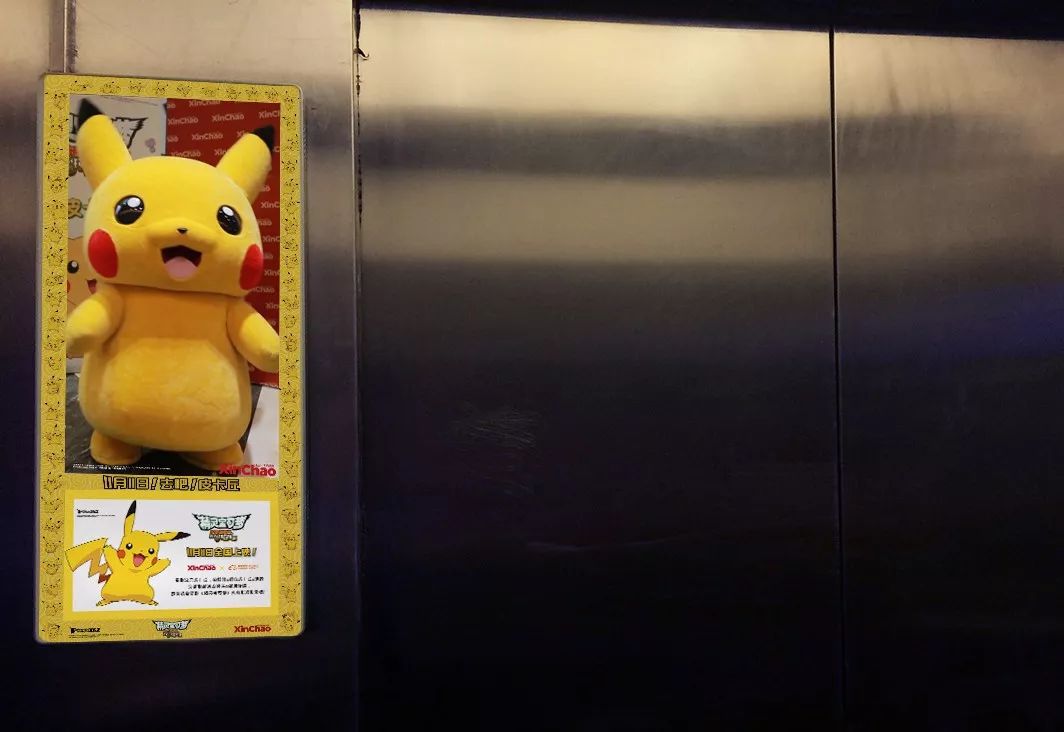 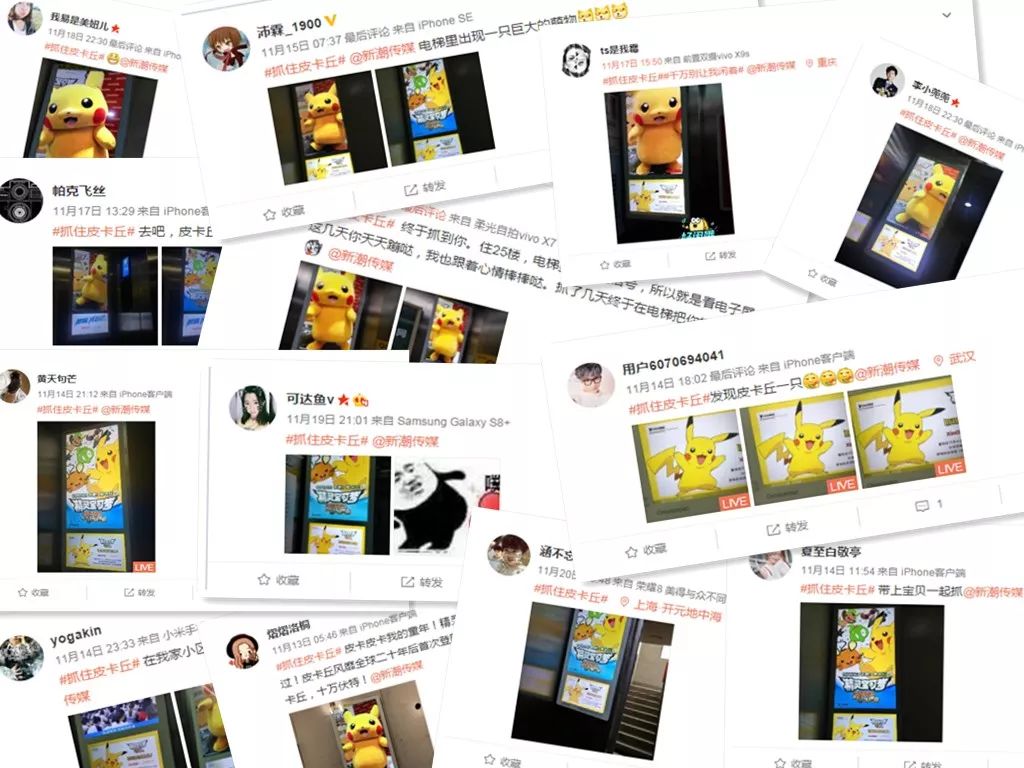 In recent years, offline traffic dividends have returned,The value of life scene media is highlighted. It has become a new battleground of brand marketing to penetrate the brand into the elevator media of urban life and realize the effective reach of users. And to capture the attention of the audience, high-quality content and effective advertising forms have become the key.

In the digital age, whether it is elevator advertising or Internet advertising, how to let consumers have mental awareness of the brand, it is best to form a long-term contact with the brand and interactive link, this is the focus of communication. 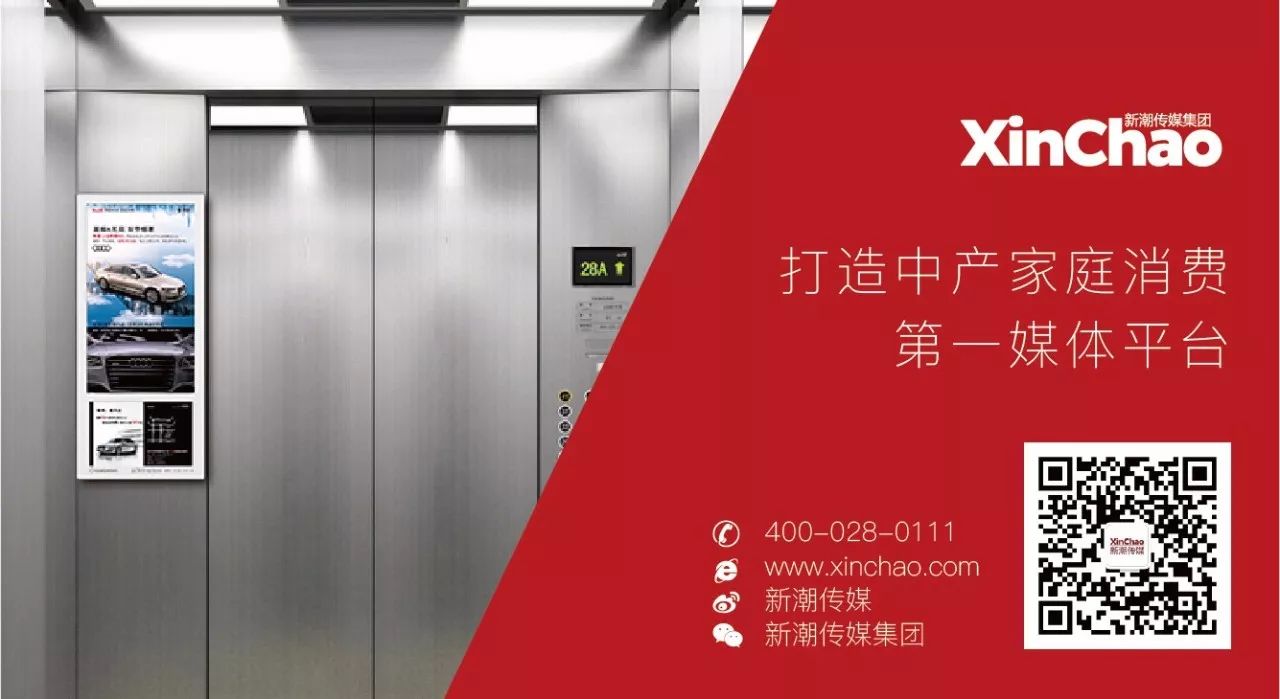 The annual inventory of trendy elevator TV ads has become a trend to enhance audience interaction
Up to 200 words, currently totalWord.

喜欢此内容的人还喜欢
微信扫一扫
使用小程序
Cancel. 允许
Cancel. 允许
微信版本过低
当前微信版本不支持该功能，请升级至最新版本。
I know. 前往更新
确定删除回复吗？
Cancel. 删除
知道了
长按识别前往小程序
SHARE ON TwitterRedditTumblrEmailBufferLinkedInPin It
Li Zongsheng produced Mercedes-Benz micro-movie ads, in the end how to reach the hearts of the audience?
The ERA of TV drama "audience segmentation" has come, and the advertising operation of video sites is accurate

Magic weapon! Can turn audience viewing emotions into real ad value
Media's orientation to audience perception - talk about the demonizing image of "mother-in-law" in Audi's second-hand car ads
The world is turning roadside glass into a giant display, window advertising play slip, attracting audiences without worrying
The law of outdoor advertising in the brand life cycle
What are the forms of advertising on the market? What are the advantages?