The results-driven share price has risen, making it one of the top 10 new shares in Hong Kong in 2019.

Advertisers' willingness to deliver has declined, the overall size of the market has declined, and where are the incremental opportunities in the market? How do advertisers break through? As a well-known domestic advertising marketer, whether from the current industry environment, or the company's development strategy adjustment, the trend of growth of Ruicheng to answer these questions to provide an important observation sample.

01, the number of forcesword advertising service 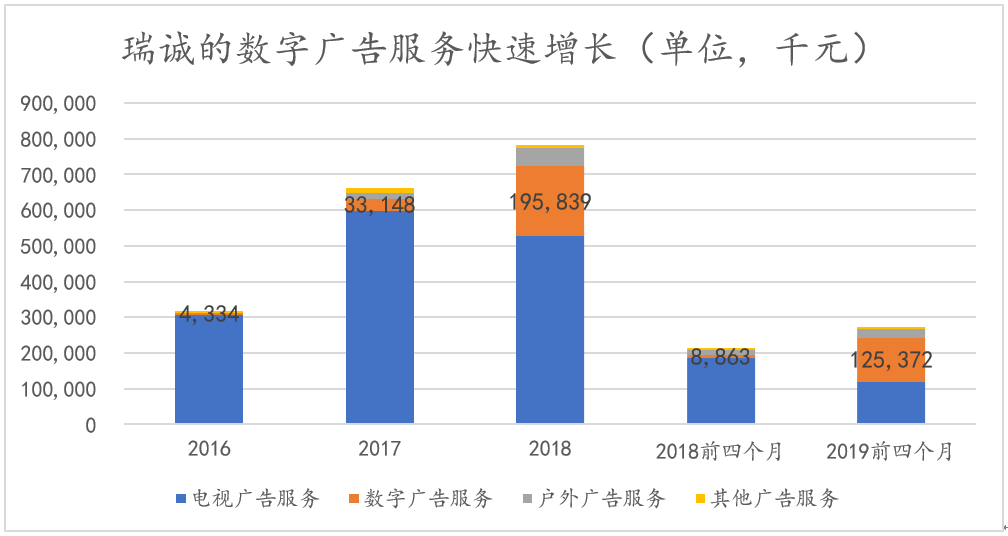 Ruicheng to start with television advertising, after years of development, has accumulated a number of advertisers from all walks of life, such as well-known beverage enterprises Wang Laoji, well-known kitchen electrical manufacturers, domestic telecommunications giants. At the same time with the first-line provincial satellite television stations to establish a deep cooperative relationship, such as Jiangsu Satellite TV, Hunan Satellite TV, Zhejiang Satellite TV and so on. With the advantage of resources, Ruicheng has established a leading industry position.

It can be said that it is this forward-looking strategic adjustment, so that Ruicheng in the industry down period to seize the development opportunities, to achieve steady growth. The bright operating data of digital advertising business verify the correctness of Ruicheng's strategic layout and give the confidence of the capital market to increase its holdings.

After a long period of high-speed growth, China's advertising market is turning to a stable stage of development.On the one hand, advertisers will be more cautious about running ads as the macro economy enters a period of bottoming out. On the other hand, the domestic population dividend peaked, especially the Internet traffic dividend subsided, access to new traffic is becoming more and more difficult, advertising effect is not as good as the dividend period.

In such a big trend, Ruicheng through the strategic layout of digital advertising and outdoor advertising business, to seize the effect of advertising rise of new dividends.

Because it can be more accurate, performance advertising is a major use of digital advertising, advertising resource providers by attracting Internet users to browse or click on the platform ads to help advertisers promote and sell. The performance ad pricing model charges advertisers based on the cost per thousand exposures or per click.

And the building advertising as the representative of the outdoor advertising price-performance ratio is gradually emerging, in the price tends to be reasonable at the same time, the effect is also improving, more and more attract advertisers to increase delivery. Now advertising resources providers of building video and frame thousands of displays about 30-40 yuan, has been lower than the Internet end brand advertising type. And building video advertising and other high traffic and repeated to make the effect of improved.

From the financial report, Ruicheng's new business strategy has achieved remarkable results, in which the proportion of digital advertising contribution to revenue continues to rise, almost half of the revenue, has become its largest source of revenue. The importance of digital advertising speaks for itself.

03, drive into the fast lane of development

According to research by third-party agencies, China's advertising capacity will reach about 1110.4 billion yuan by 2023, based on advertisers' spending. However, it can be noted that the compound growth rate for 2019-2023 has slowed to a single-digit growth rate of 8.2%, while digital advertising has maintained a rapid growth rate of 13.8%. First, in a more precise trend, digital advertising requires advertisers to use the latest media platforms and strategies to reach consumers, content, channels and operations have higher requirements. And Ruicheng in the industry for many years, formed a set of mature advertising methodology, can make its rapid layout of the new digital advertising platform.

Looking to the future, with the macroeconomic slowdown, advertisers demand pressure, the advertising industry ushered in challenges and opportunities coexisting situation. In the process of industry adjustment, the effect advertisement will become the trend, only seize the new development opportunity to grow against the trend.

The essence of the sustainable development of enterprises is to constantly create new growth points. Charles Handy, a well-known management scholar, points out in "The Second Curve: Secondary Growth Across the "S-Curve" that if a company can find the "second curve" that leads the company to its second take-off before the first curve reaches its peak, and the second curve begins to grow before the first curve reaches its peak, the vision of sustainable growth can be realized. It can be said that the digital advertising business is the second curve of Ruicheng's re-development, which paints a rapid growth vision for the capital market.

2017 From the Media Writer Geek Awards

Phoenix Self-Media Person of the Year 2015

Digital advertising and DM Hub dramatically increase big data marketing conversion rates
2019 Global Digital Advertising Trends Report
By 2020, mobile apps, digital advertising, and AI technologies will share the golden age
This is the most funny ad I've ever seen
Give me the time for a poem, which is probably the best advertisement for this year's Spring Festival