Just after the fourth quarter of 2019, what are the trends in ad delivery across traffic platforms? What is the platform's focus on the industry? Which head app advertisers are strong? Which industries do major advertising media majors invest in?

Description:The data mentioned in this article are derived from the mobile advertising intelligence tracked by App Growing, with the number of ads available, the amount of advertising (estimated) as the basis for judging the intensity of advertising, and is not exactly equivalent to actual consumption, for reference only.

Based on the advertising intelligence tracked by App Growing in the second half of the year, the proportion of ads in the five major industries of Q3 and Q4 head is distributed as follows.Q4 gaming and education industry decreased significantly, it is assumed that the two major industries in the Q3 during the summer period, Q4 shrink the intensity of delivery.Clothing shoes, entertainment and skin care and beauty industries accounted for an increase in the Q4 period. 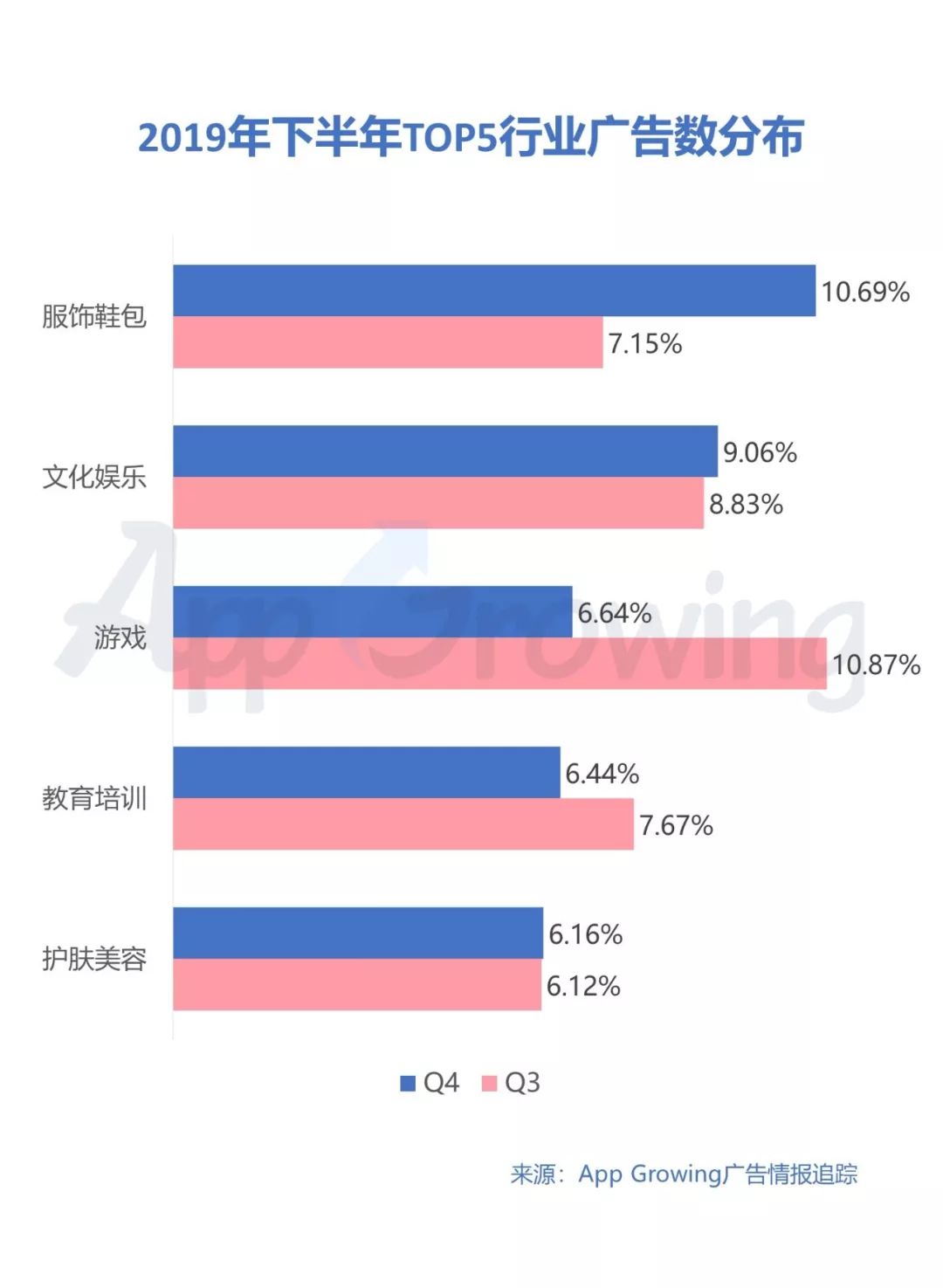 In order to further analyze the distribution of advertisers in different industries, App Growing based on AI technology to the landing page material intelligent classification, subdivided into activity promotion (promoting brand or activities, through form collection to attract stay-at-home consultation), application promotion (landing page to guide the download of an app), e-commerce promotion (landing page for the sale of a product, such as second-class e-commerce or Taobao, JD.com and other e-commerce platform merchandise sales), the following.
Among the advertisements run by the huge engine Q4, e-commerce promotion accounted for the largest proportion of ads, reaching 53.38 percent, activity promotion ads accounted for 34.20 percent, and application promotion ads accounted for 12.41 percent,Clothing shoes, skin care and beauty, education and training, cultural entertainment and gamesThe number of ads for the platformTop5Industry, apparelShoe bags account for 23.42%. 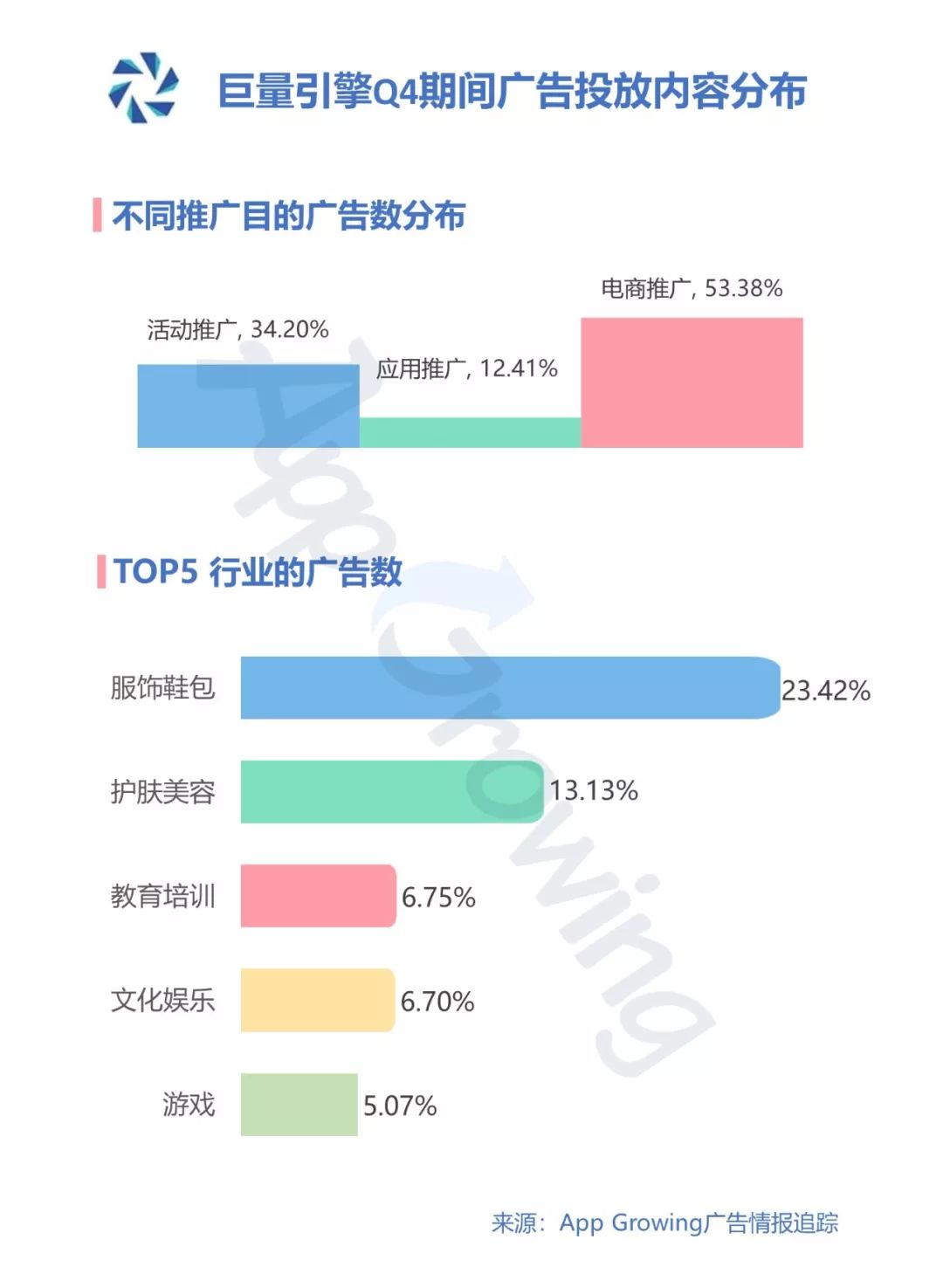 Visible from the ad's text word cloud map "Free," "Cost-effective," "Subsidy," "Billions"Such as the platform advertising text high-frequency vocabulary, further inquiries found that Q4 period gathered in the platform to vigorously serve advertising, popular paper for "It's a good deal, it's a billion dollars in subsidies, the authorities are crazy! The iPhone doesn't drop 1000 straight, so it's cost-effective to keep it low”，“End of the year to send benefits, gather a cost-effective 10 billion subsidies, really too cost-effective, super cost-effective!"And so on." 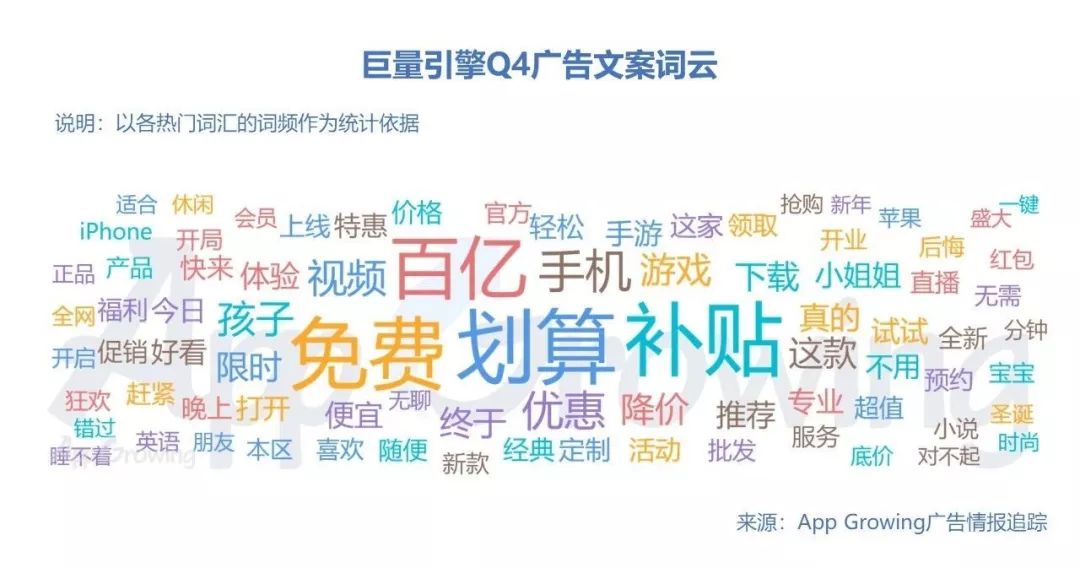 Based on the advertising algorithm to track the amount of ad delivery of individual apps to estimate, organized a huge engine Q4 ad delivery amount ranked Top10 games and non-game apps, the same as below."Jitter Short Video," "Today's Headlines" and "YY"For the Q4 period of the huge engine of the focus of app advertisers, advertising amount (estimated) non-game app top three.

TOP10 hand tour style is numerous, the secondary category "basket master", the legendary category "Blue to The Prestige Edition" and the card category "Junior Three Nations 2" ranked in the top three in the game list. 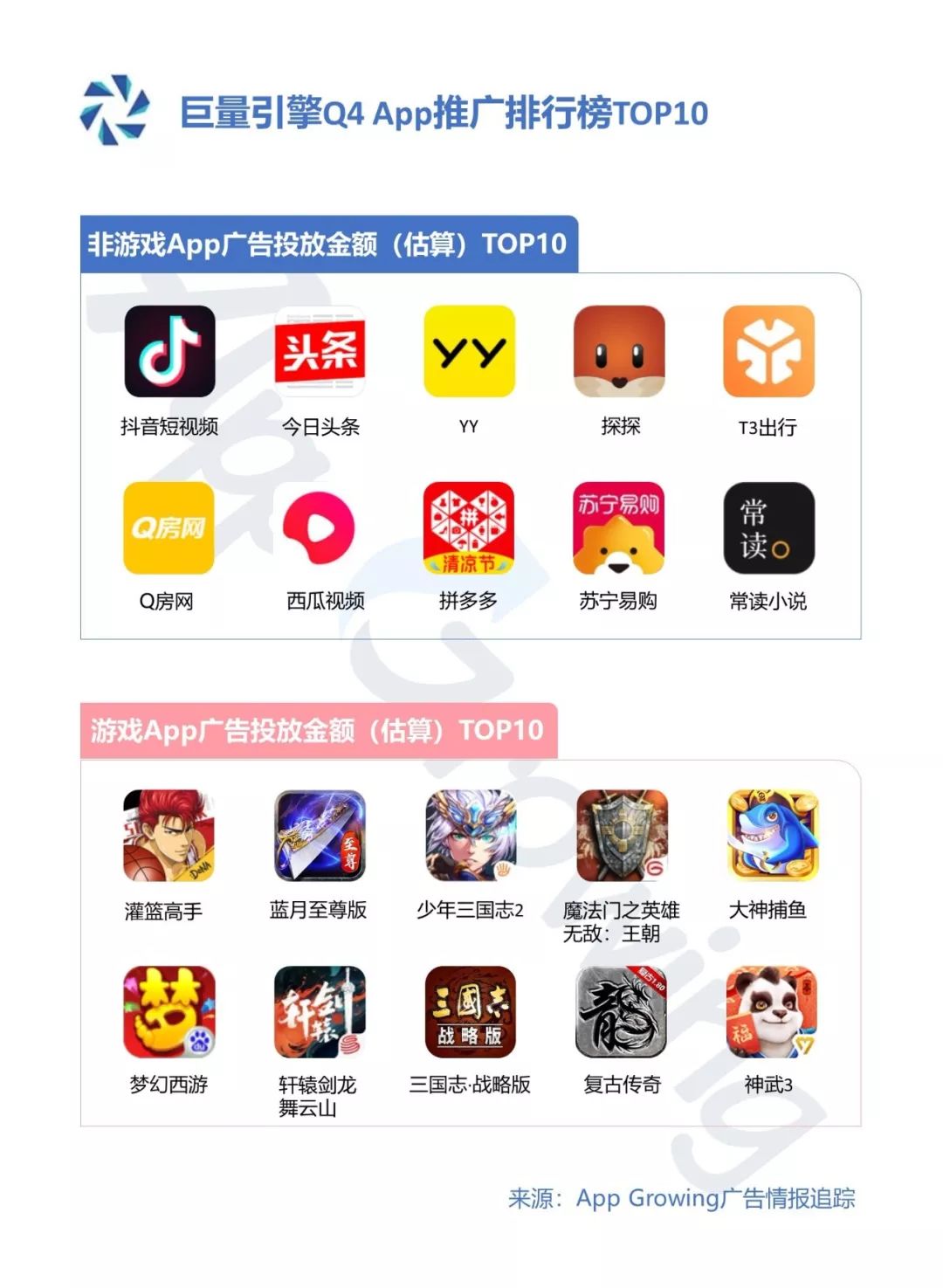 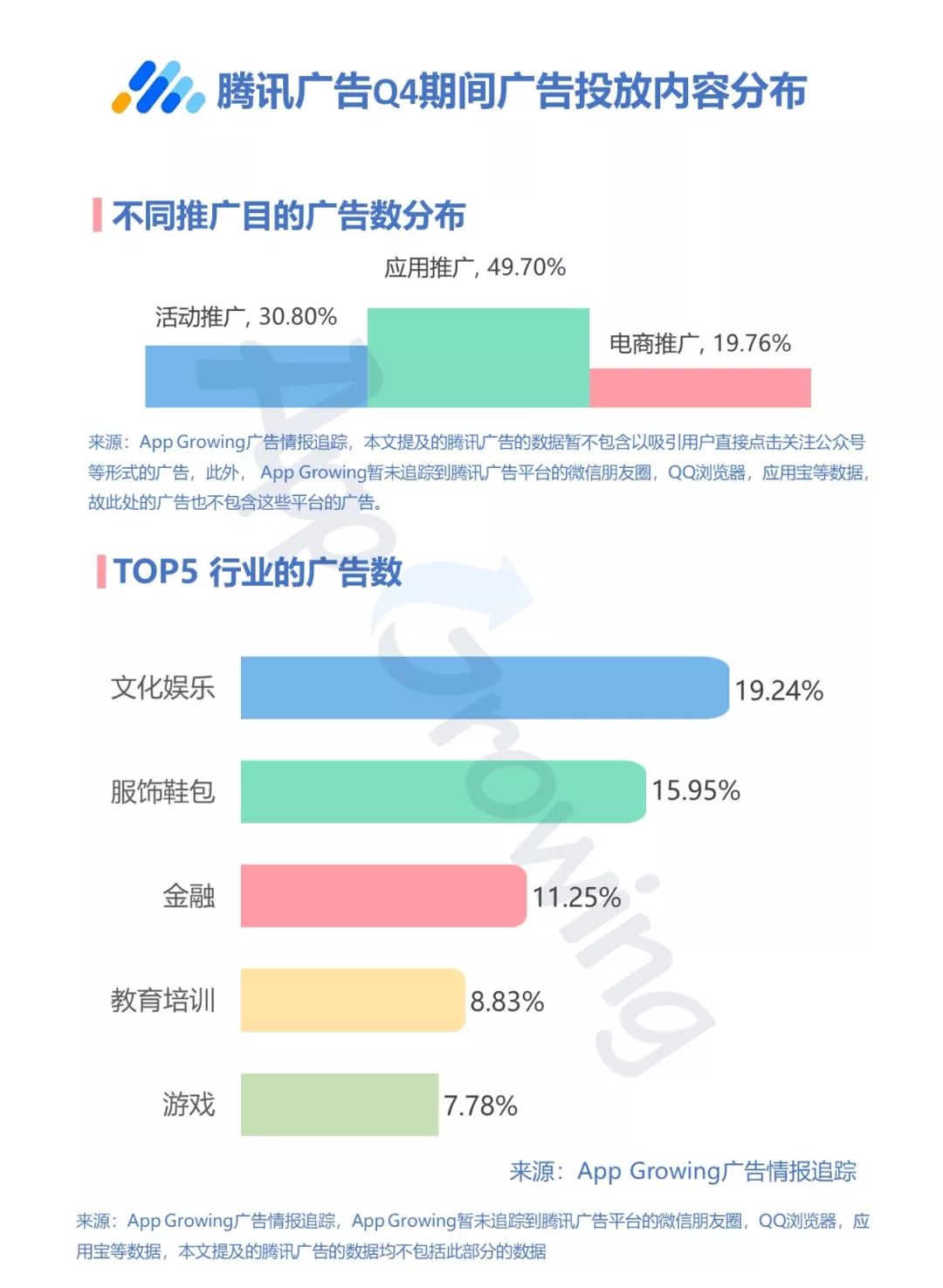 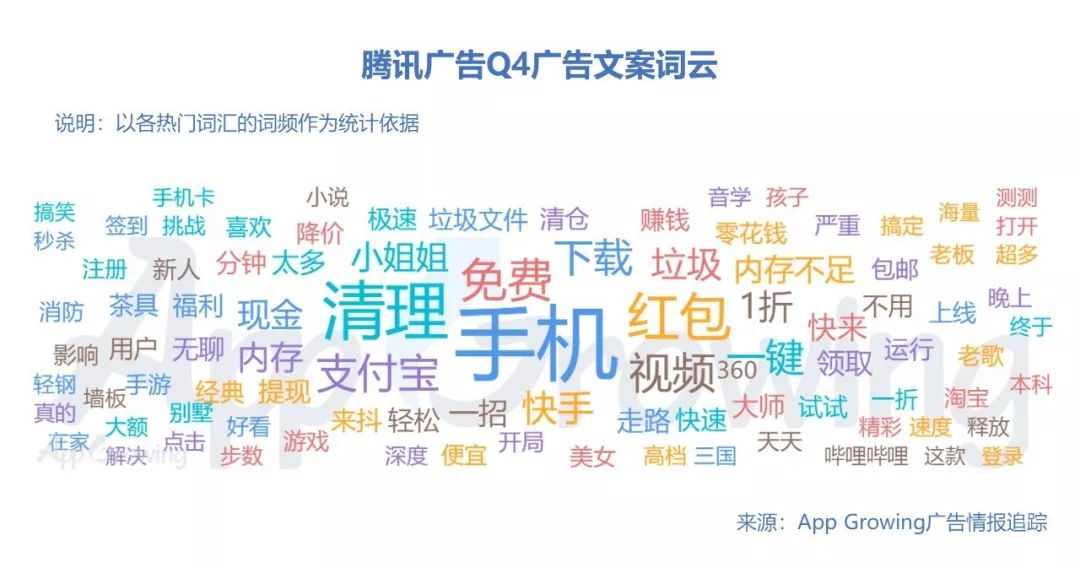 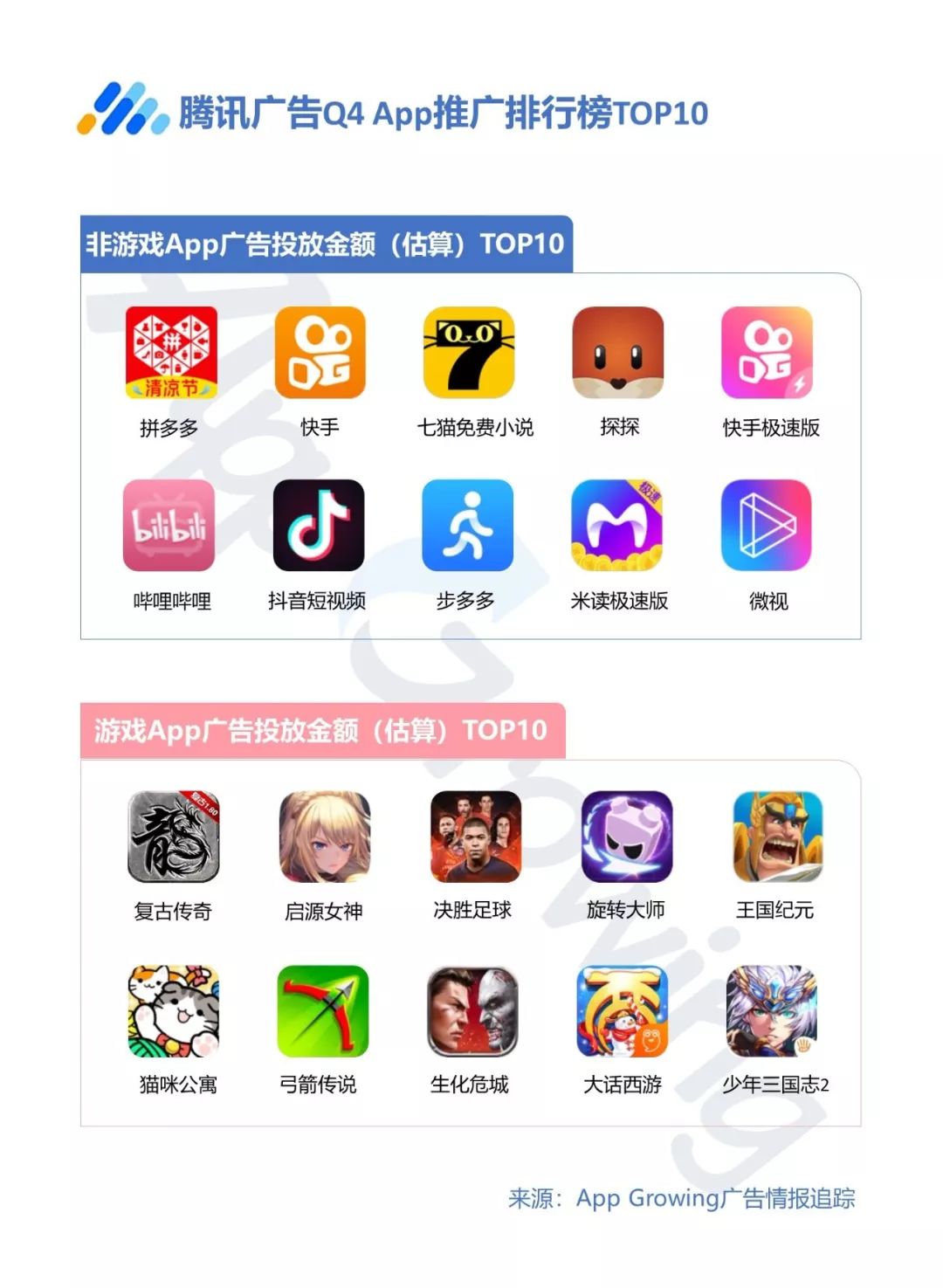 Baidu's information flow platform more than 90% of advertising to promote the purpose of the campaignand, as for itEducation and training, investment joining, home furnishings, clothing shoe bags and skin care and beautyThe number of ads for the platform for the industryTop5industry. 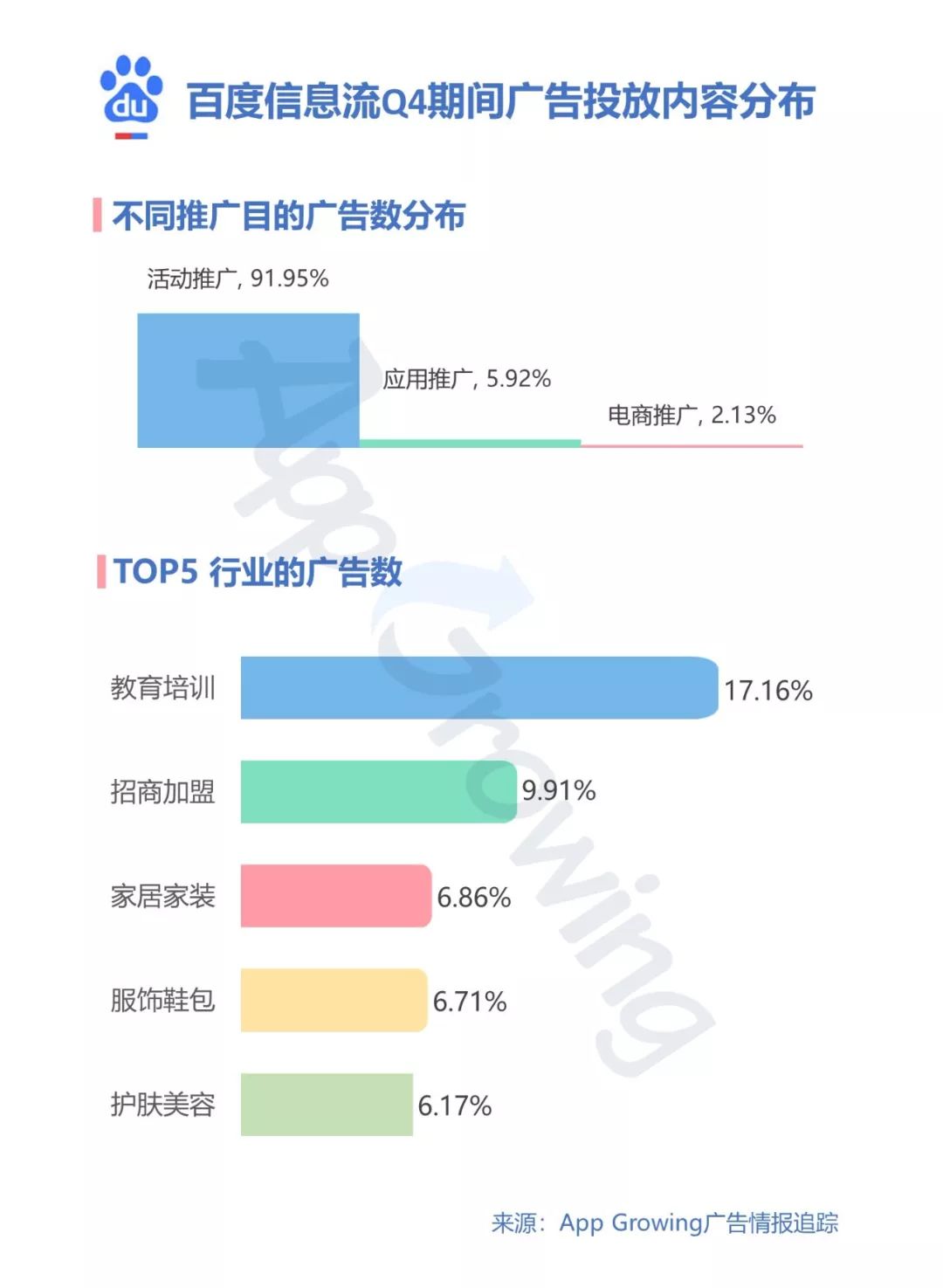 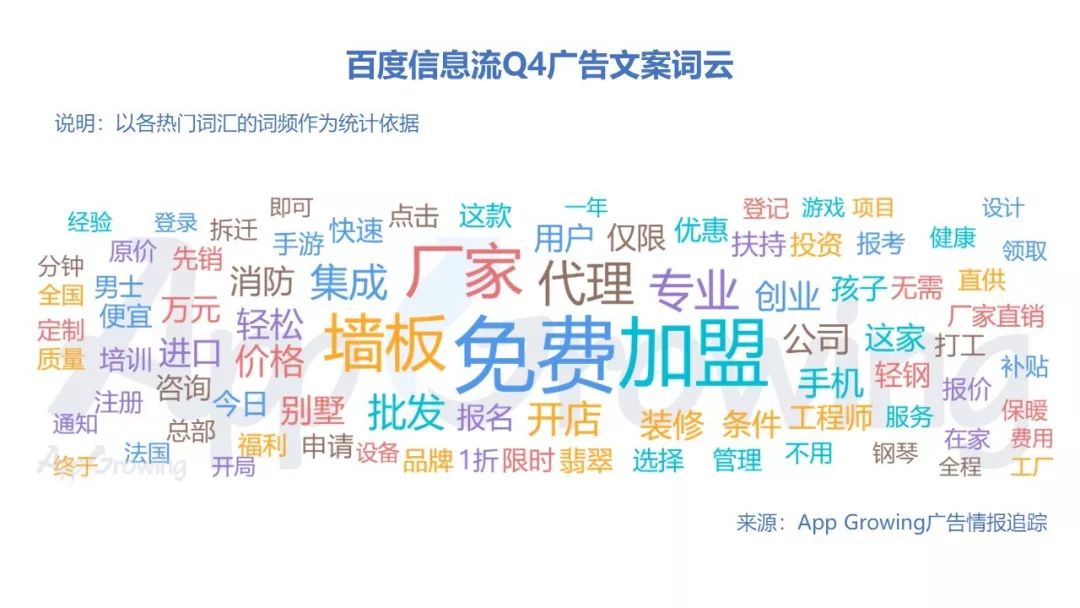 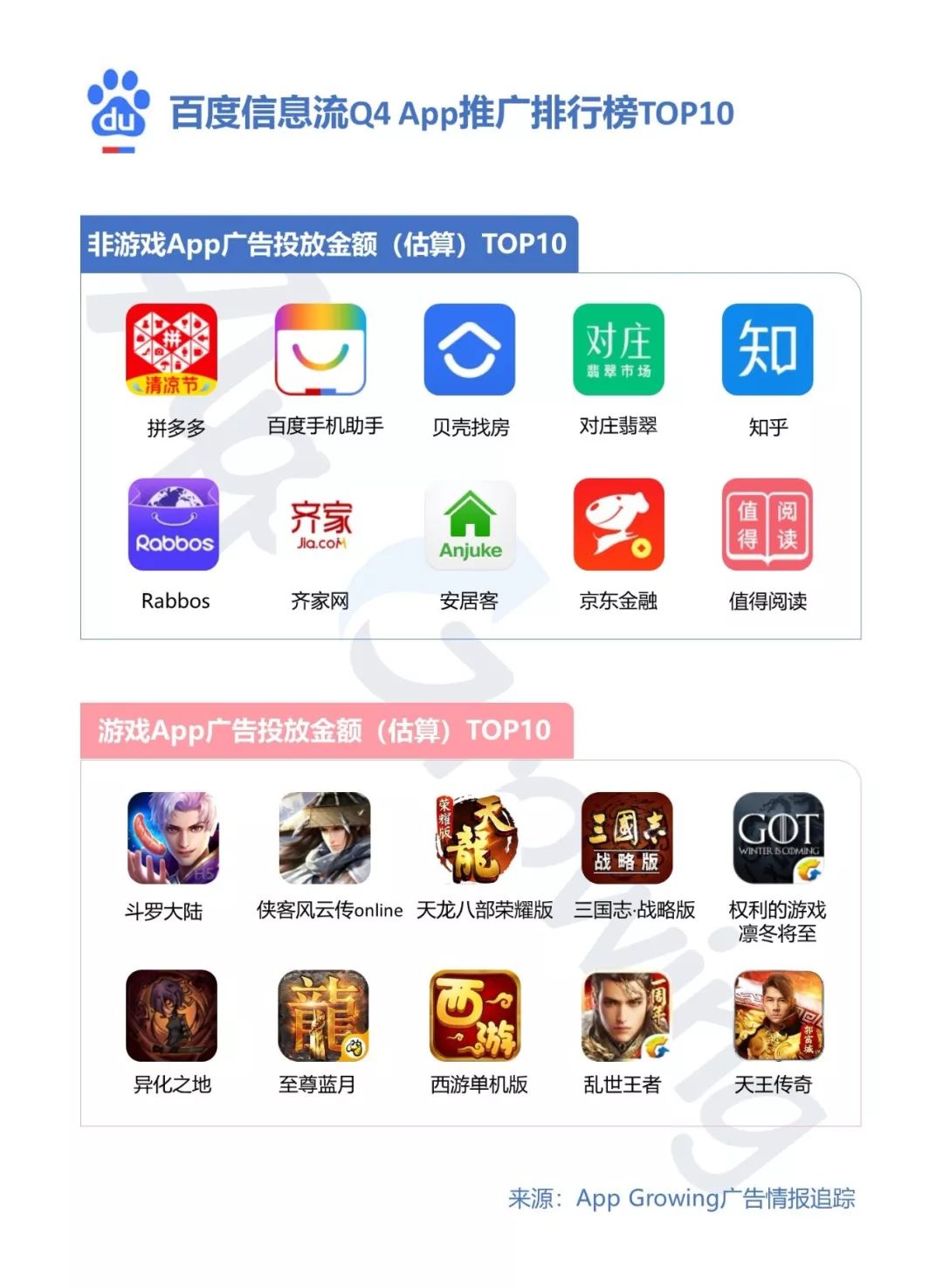 Q4 period, Baidu Baiqing Fuji platform landing page for the campaign to promote the largest proportion of advertising, up to 97.41%, application promotion and e-commerce promotion accounted for less.Games, education and training, skin care and beauty, medical and health careAnd.Digital home appliancesThe number of ads for the platformTop5 industry, the game industry accounted for the largest proportion of advertising, 24.64 percent. 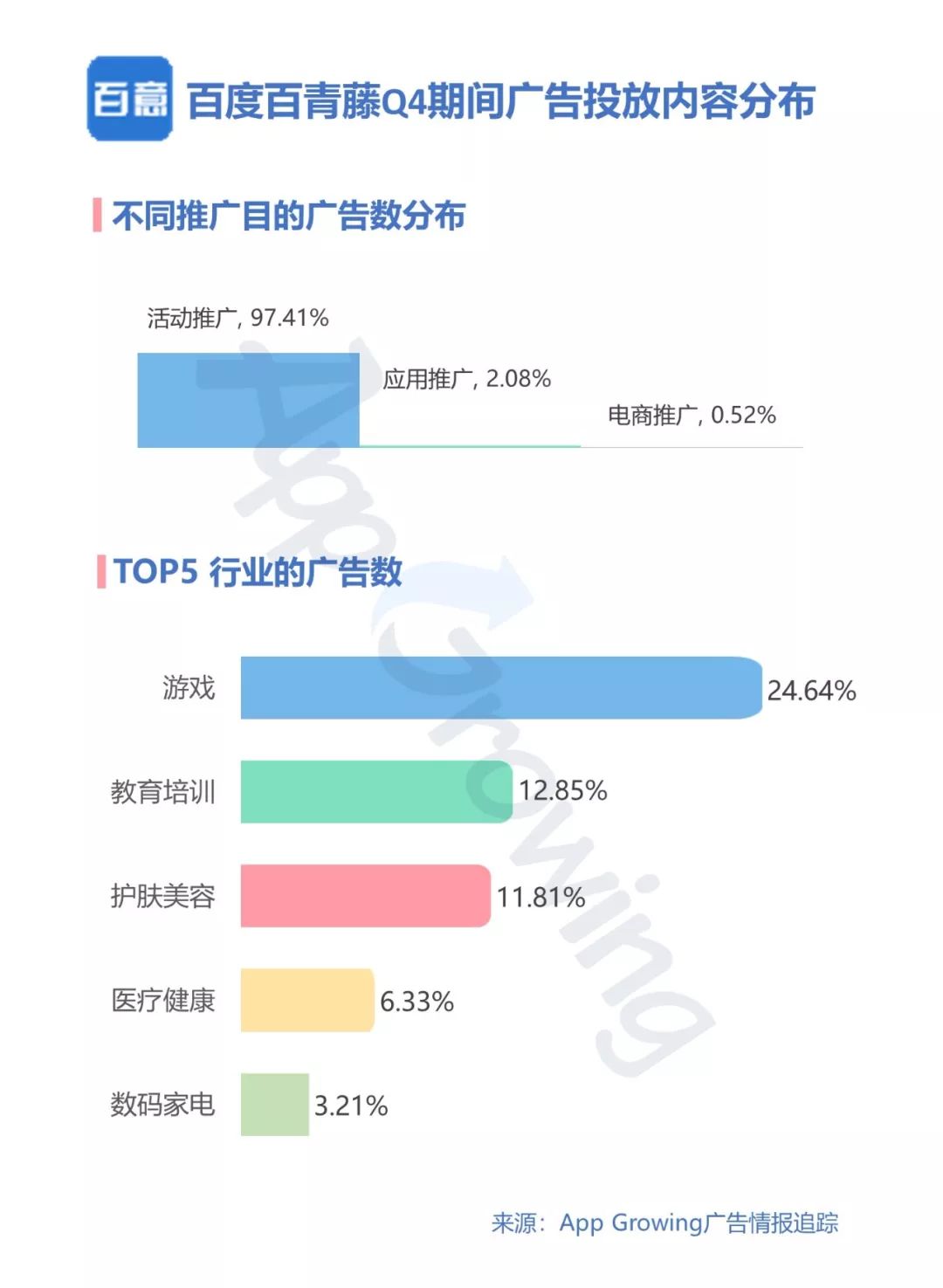 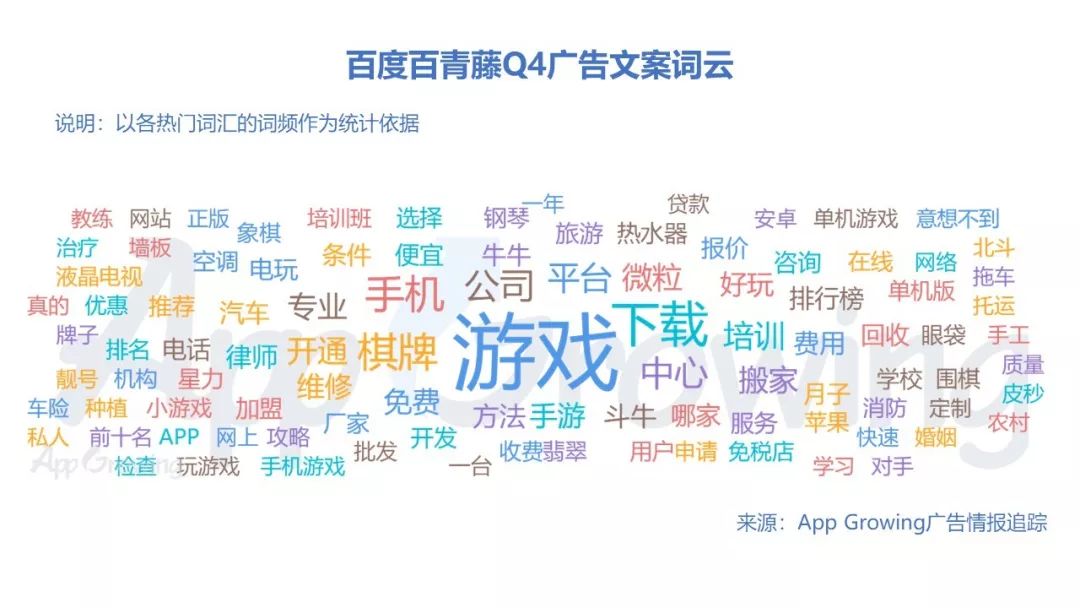 In the advertising amount (estimated) Top10, "Lotodo", "To Zhuang Emerald", "Residential" ranked in the top three, the list of applications for life travel-related, shopping, tools.War strategy category "King of chaos", fairy category "Rage Fairy", legendary category "retro hero version:Heavy games such as Hero Hit are at the forefront of the game app. 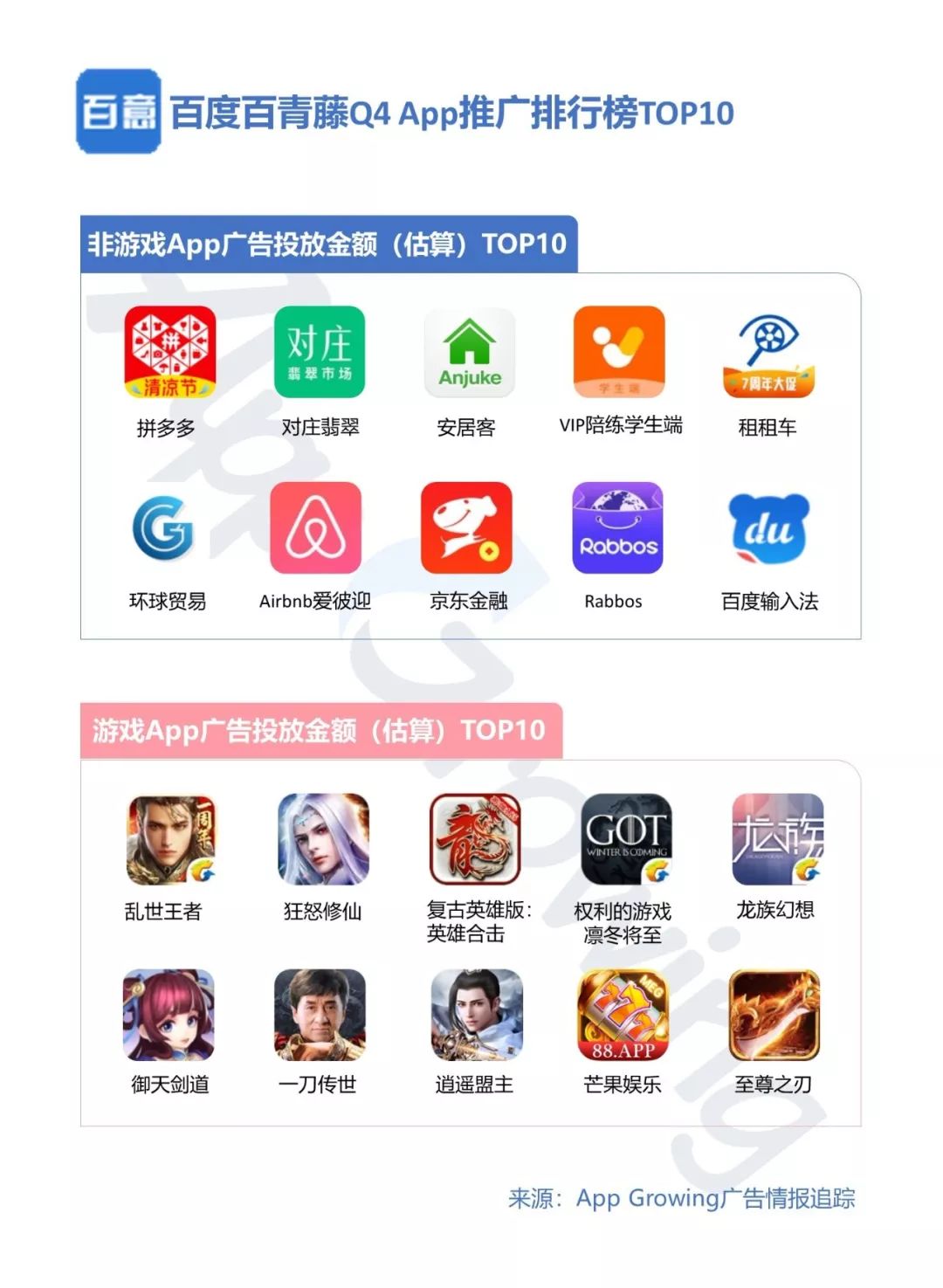 The platform has the highest percentage of ads promoted by the campaign, with 92.68 percent of the ads.Education and training, investment joining, finance, integrated e-commerceAnd.Software applicationsThe number of ads for the platform for the industryTop5 industryThe education and training sector still has the highest proportion, at 22.16 per cent. 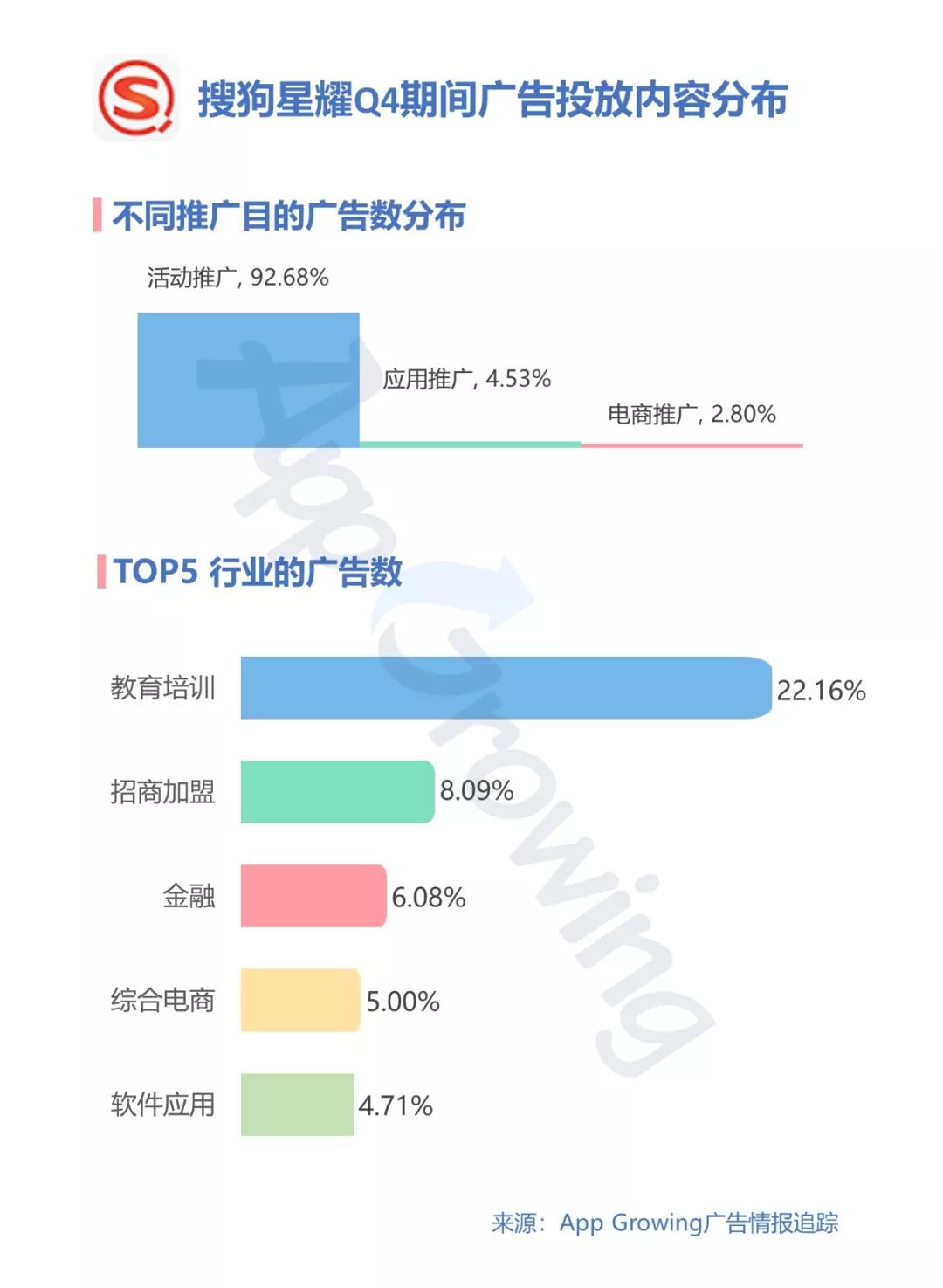 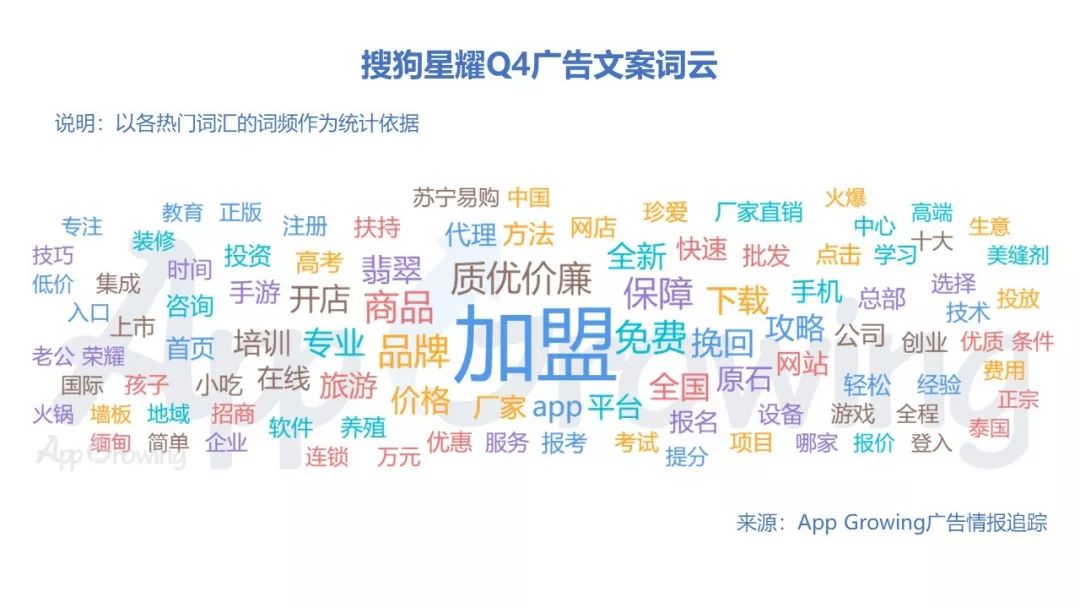 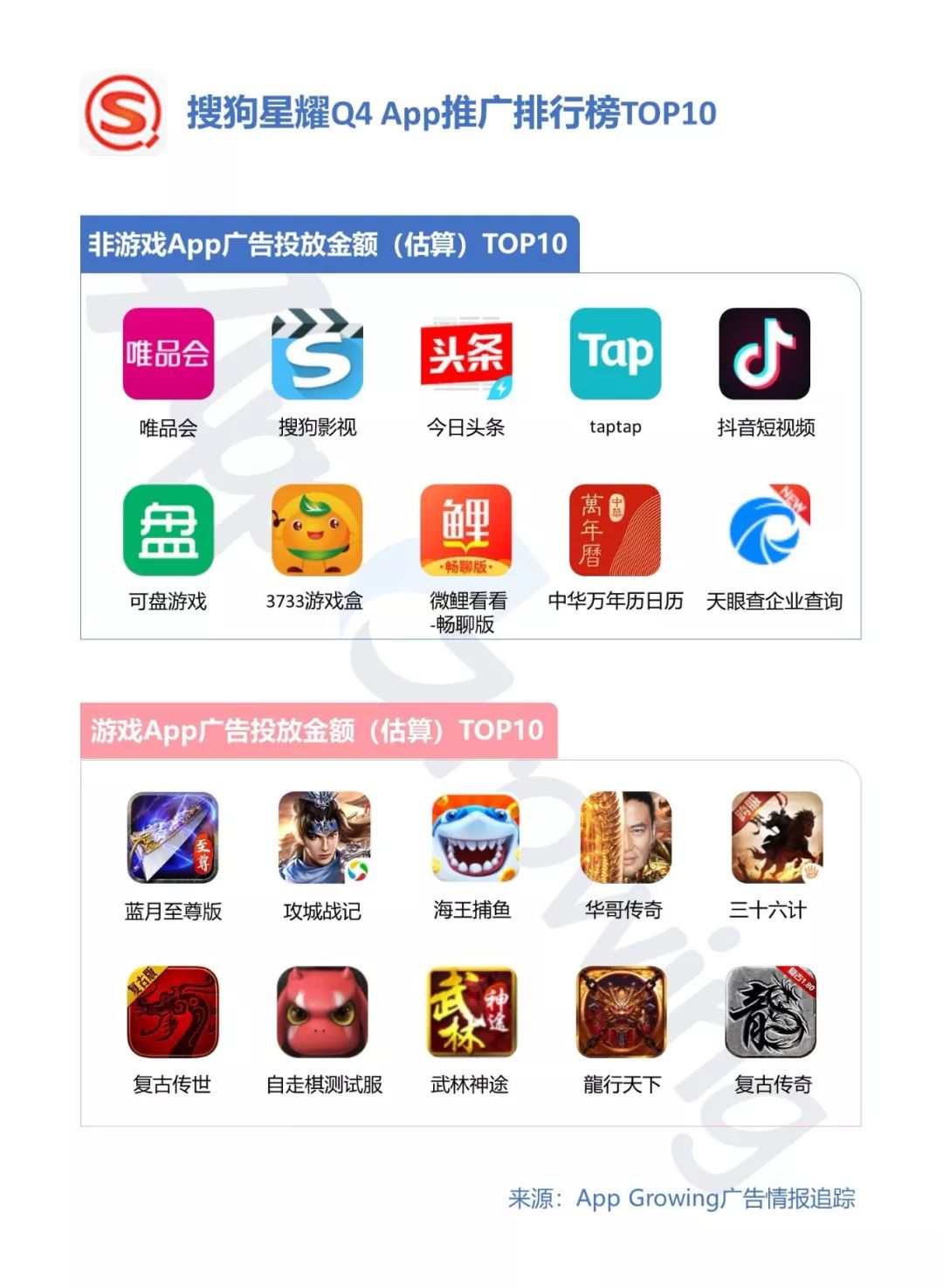 During Q4, the platform had more advertisements for the purpose of promotion and application promotionGames, skin care and beauty, education and training, integrated e-commerce and financefor the platformNumber of ads Top5industry. 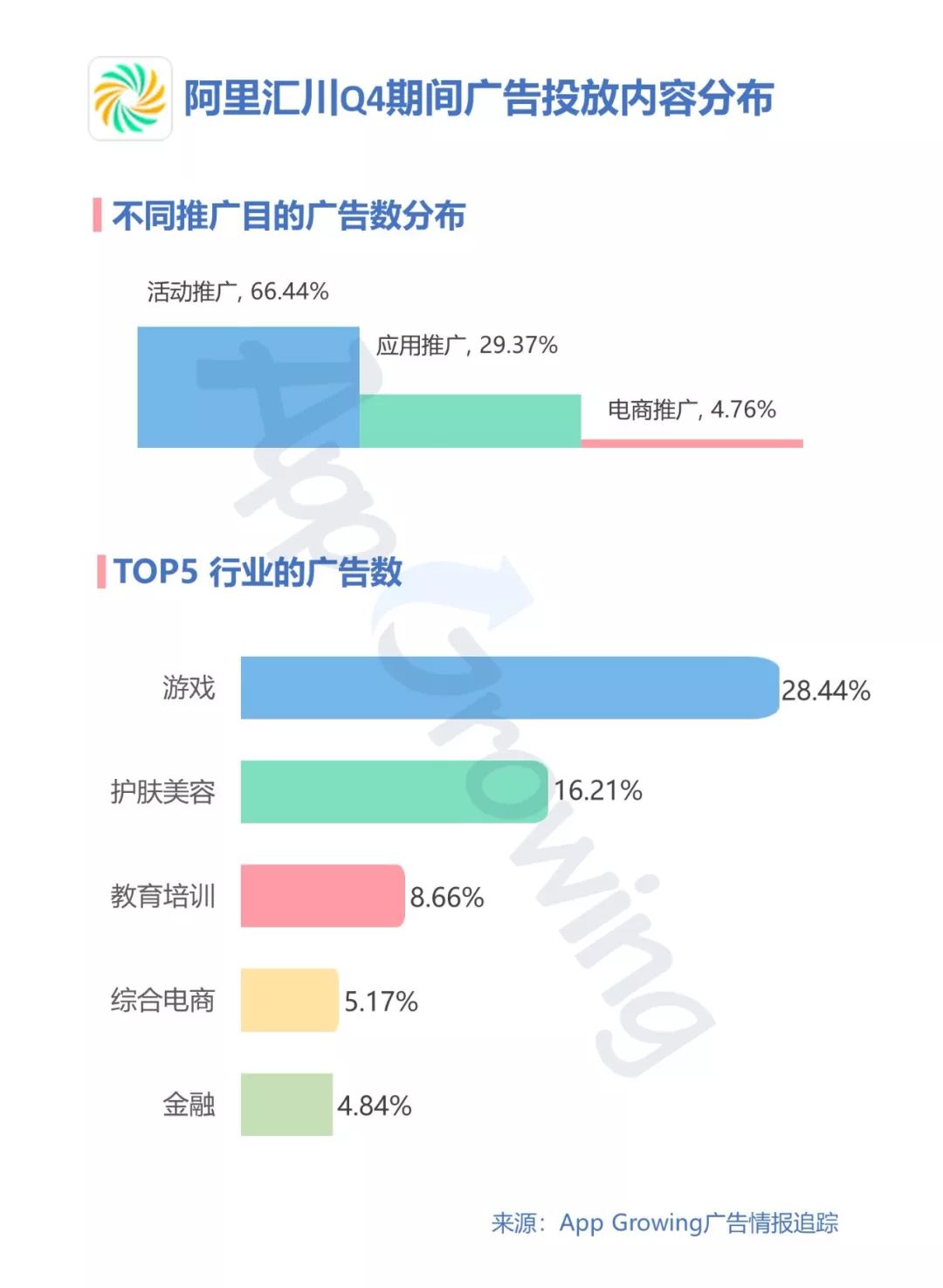 "Dead Bodies," "Fiction," "Legend," "Hand Tour," "Opening"Such as for its advertising text high-frequency vocabulary, we can see reading applications and legendary hand-travel in the platform to launch a strong force. 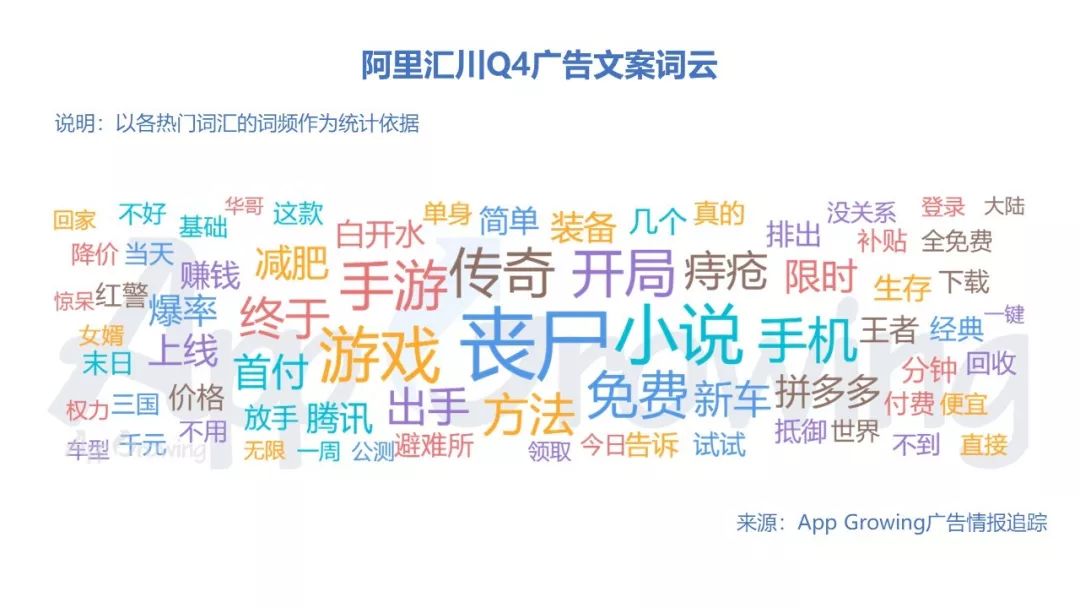 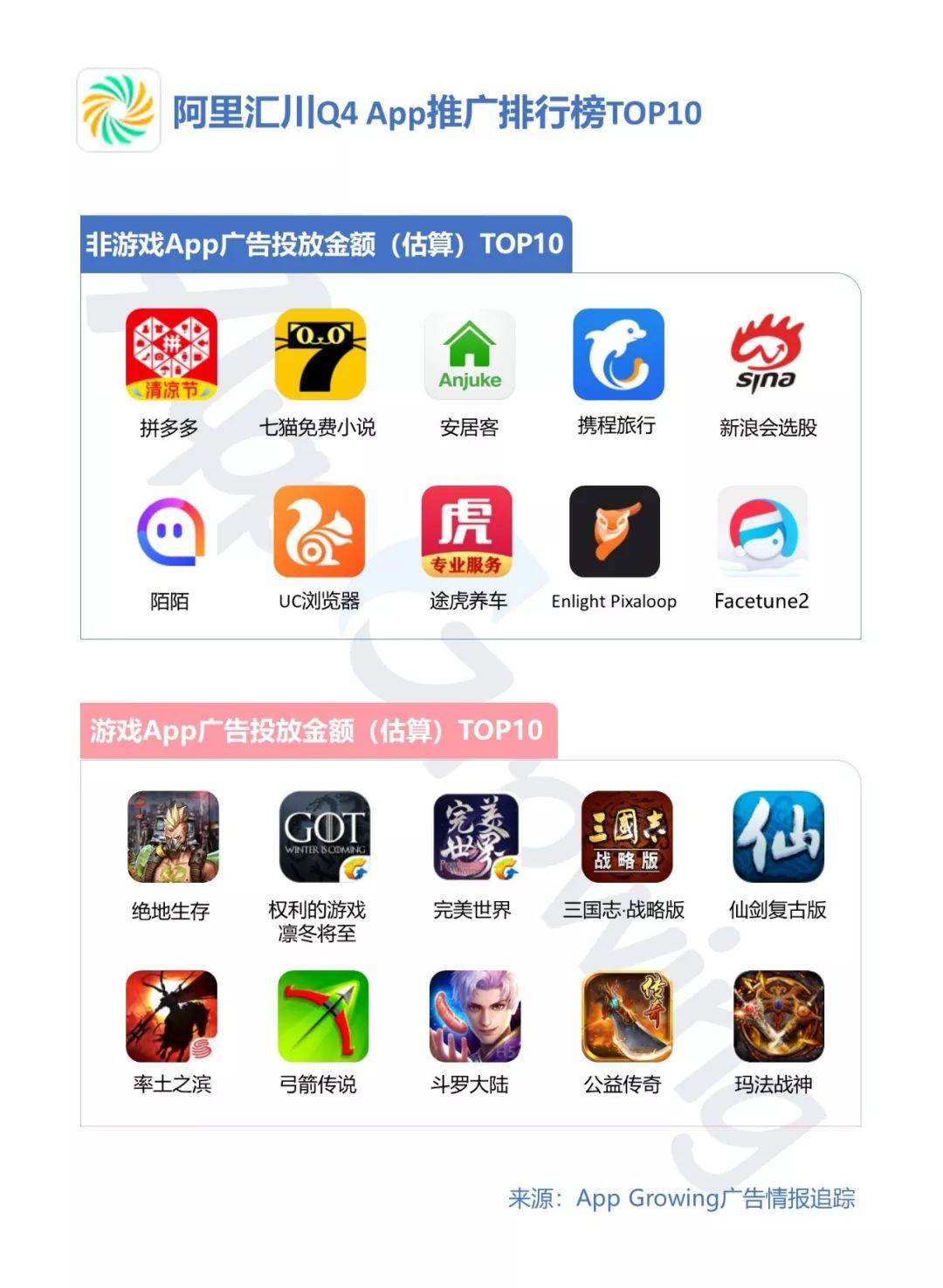 Q4 Which major traffic platforms are hot investments in which industries? Ad serving intelligence insights
Up to 200 words, currently totalWord.