Only Wang Xing is still holding on to the meal No: was the ancestor of China's microblogging, but lost to Sina

The frontiers of the Internet

Aggregate the Internet industry cutting-edge information, covering a variety of fresh cases and data, around the Internet people are concerned!

Source . . The frontiers of the Internet（ID：netqianyan）

People who search and chase hot spots on Sina Weibo can't imagine, and China's Weibo ancestors have others.

Just as people who order takeaways on american tours also didn't expect That when Wang Xing first started his business, he did it as a social product, Rice No, which was also China's first micro-blog.

In July 2006, the ad emerging of Twitter blew the then-social network into flames overnight, and this instantly updateable short text (no more than 140 words) was called a micro-blog.

Meal no these two words from the "History" in that sentence: cheap quite old, can still eat? It's reminiscent of Chinese mantra of greeting you: Eat it?

The registration of these users, so that the platform content is exciting, but also for Chinese netizens to provide a close encounter with experts and idols.

Here, there is no commercial interference and capital pressure, idols will have a cordial dialogue with you, experts will be patient for you to answer questions, you can vent their complaints, share the fragments of life, such a good community atmosphere, cultivate a large number of loyal "dinner friends."

As Wang Xing's meal no personality signature: If I haven't seen, thought of, or done anything worth saying in the meal all day, then the day is too murky.

By 2009, the number of users of the network had passed the million mark. On June 2nd of the same year, HP became the first corporate pay-per-view user to earn the first bucket of revenue.

It has to be said that Wang Xing's action is really fast enough to step on the wind!

At that time, the mainstream of network information exchange or the school network, QQ group, based on the real social circle. And the emergence of rice no, broke the limits of the circle, to China's social networks came a shock.

If the meal is not so smooth development, there is no Sina Weibo what's the matter, but there is no if in this world. 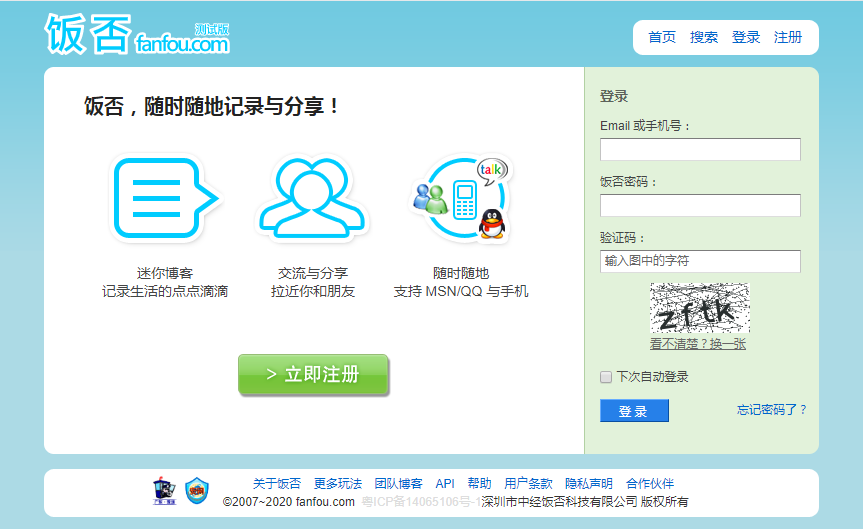 Now open the meal No, want to register, load out the page only 6 words:Registration is suspended on this site.

The 505 days that were stolen

Information audit, is all internet platforms will encounter difficulties, it is equally difficult to eat No.

The way information is disseminated by micro-blogs, although it is fast and fast, but these content is also mixed with a lot of sensitive content and bad information.

At that time, the meal has become a lot of social events are reported and commented on the first scene, but it can hardly be pre-screened, nor can it be judged by the standard after the fact.

The closure of the meal was too late to prevent.

Originally in the "Utopia" of its happy friends, also began a 505-day exile. Bean petal group, QQ group, Baidu paste bar has become a temporary base for rice friends, and then these small stations were also forced to disband.

505 days, what can happen to a start-up? Turnover, product iterations, shareholder change, more likely from A to B round of the span, and rice in these 505 days, nothing to do, nothing to do.

The meal did not get up early, stepped on the wind, but failed to catch it.

In these more than 500 days, the major Internet companies have flocked to micro-blog this fat meat. 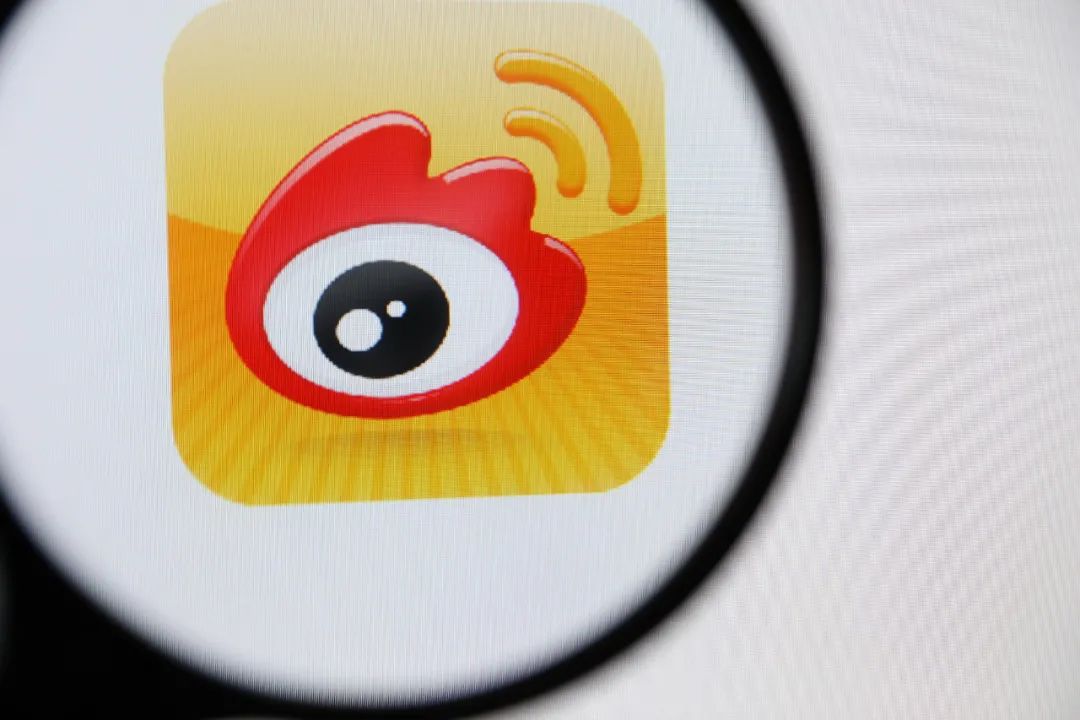 After a few vicious fights, we all saw it. Sina Weibo, which has been the biggest winner, officially ceased operations on the evening of September 28 this year, although it retained its second-place position.

In November 2011, the home page of the rice no network was replaced with a picture of the movie "The Gods of the Years Stealing", and the text "Wait for you to have dinner", meaning whether the meal will come back.

On the night the meal returned, the server collapsed due to too much traffic, and the meal was still a loyal and enthusiastic one, but the social network had already changed. At this time Sina Weibo, has been as high as50 millionthe number of active users is far ahead.

During this period, idle Wang Xing, out of another entrepreneurial project - the United States Group Network, broke into an unprecedented Red Sea! Wang Xing can turn the head of the car, running towards another field, whether the meal has become old.

Whether the meal did the wrong thing, and Sina did the right thing

If the author remembers correctly, whether the meal last appeared in the public eye, or because some time ago, Wang Xing in the meal did not respond to the "American group cancel Alipay payment", boarded the hot search on Weibo. 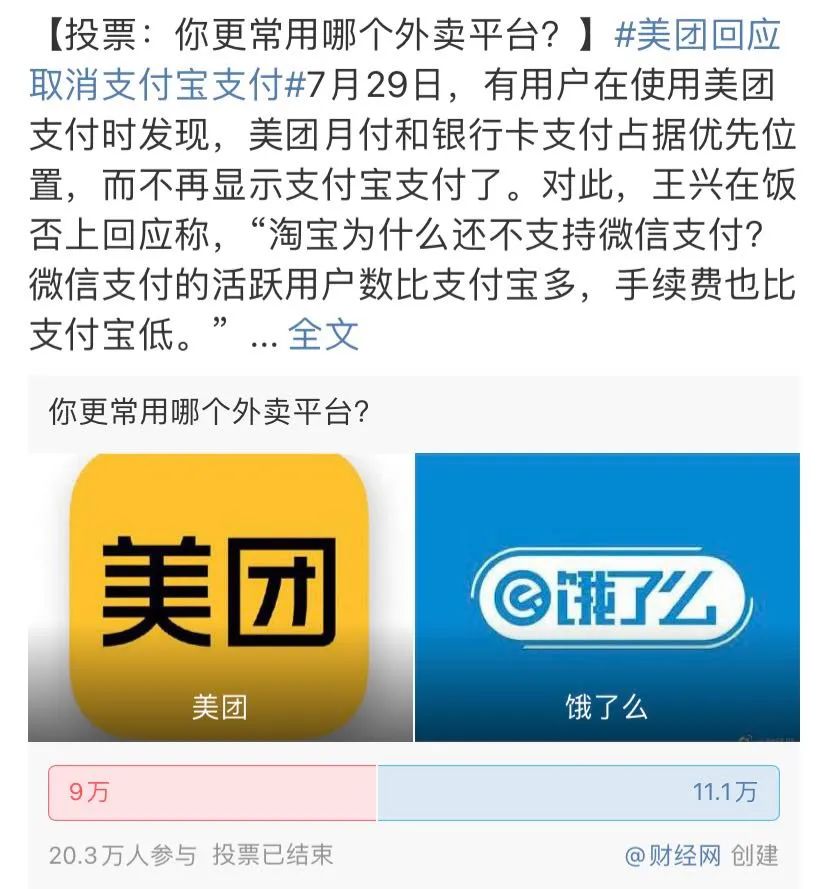 Machine can not be lost when no longer come, rice has been missed forever!

The fall of rice no, on the one hand, because the content supervision is not conducive, missed the best period of development, on the other hand, rice no extensive operation, also buried the root cause.

Only the original registered user is allowed to log on to access after the meal is resumed, and the new user needs an invitation from the old user if they want to register. In Sina Weibo users far beyond their own circumstances, the rice no this model is a large number of users ruthlessly blocked out of the door, is the platform high? Or to enhance the old user's sense of belonging? You and I don't know.

In addition, in the Internet field, which depends on advertising for food, the blocking of advertising accounts has blocked its path to commercialization. Rejecting ads and keeping pages clean is a good thing for users, but you know, a platform that can't be commercialized is a dead end. Even now, whether the meal has the United States group to keep, it will not become a big climate.

On the other way, Sina Weibo's operation, pile pieces, everything is the key.

First of all, Weibo invested a lot of energy, inviting stars, celebrities to stand, to achieve explosive growth.These people are the core nodes of the interpersonal network, and with them, they can attract more ordinary users. Today's oasis, B station a large number of invited celebrities to live, or Sina Weibo's old way.

Secondly, the launch of the real-time hot search list on Weibo has established a high-value core network.Social emergencies, star gossip once occurred, will be on the hot search, the whole network spread, to attract more online and offline users to participate in the discussion. This adds added value to Weibo, and today, hot search has become an important window for many people to understand current events.

Therefore, stepping on the stroke mouth is not necessarily able to fly, firmly grasp the wind mouth, do their best to do things, in order to ride the wind.

Only Wang Xing is still holding on to the meal No: was the ancestor of China's microblogging, but lost to Sina
Up to 200 words, currently totalWord.