Included in the topic
1
General Administration of Radio and Television: The so-called "uncensed version" of the program may not be disseminated on any platform

According to People's Daily Online On June 2, the State Administration of Press, Publication, Radio and Television issued a Notice on Further Strengthening the Administration of the Creation and Broadcasting of Network Audiovisual Programs, which further requested the creation and broadcasting of Network Audiovisual Programs. The Notice states thatTV dramas or movies that fail censorship shall not be broadcast online as network dramas or online movies. The so-called "full version", "uncensed version", "uncensed version" and "deleted pieces" may not be disseminated in any form on any platform such as the Internet, radio and television. Entertainment reporting must not be based on hype scandal privacy bad deeds as a gimmick to win click-through rate.

According to the Beijing Business Daily Shunfeng rookie June 1 because of who first shut down data access and staged a "tear-up" war, the National Post Office overnight to "suppress", fearing the impact of the delivery of agricultural products such as lychee. 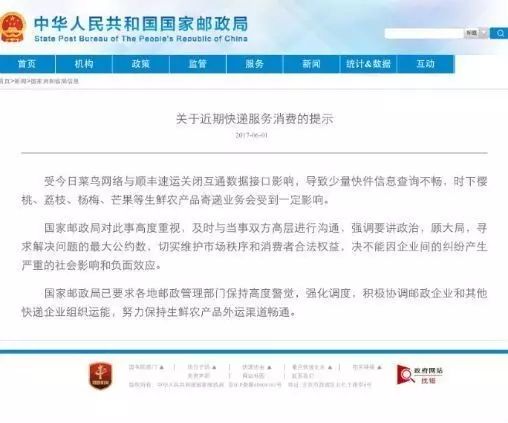 On the night of June 1, the State Post Office issued a message overnight "on the recent consumption of express delivery services" said that by today's rookie network and Shunfeng express transport closed the interoperability data interface, resulting in a small number of express information query is not smooth, the cherry, lychee, Yangmei, mango and other fresh agricultural products delivery business will be affected to some. The State Post Office attaches great importance to this matter, timely communication with the high-level parties, emphasizing the need to talk about politics, take into account the overall situation, seek to solve the problem of the maximum number of conventions, and effectively safeguard market order and the legitimate rights and interests of consumers, must not be due to disputes between enterprises have serious social impact and negative effects.

The State Post Office also said it had asked local postal administrations to maintain a high degree of vigilance, strengthen scheduling, actively coordinate the transportation capacity of postal enterprises and other courier enterprises, and strive to keep the channels for the export of fresh agricultural products open.

Or take care of the big picture...

Google Chrome is determined to hit out at web ads

According to Tencent Technology Web advertising has long been one of the most annoying of all users, and Google, the world's largest Internet advertising service, recently decided to block it with an iron fist.

Sridhar Ramaswamy, Google's senior vice president of advertising and commerce, recently confirmed that an ad filtering module will be launched in Chrome in 2018 to proactively block "boring" ads. Examples include sexual innuendo, auto-playing music/videos, or bountering that forces you to wait 10 seconds. 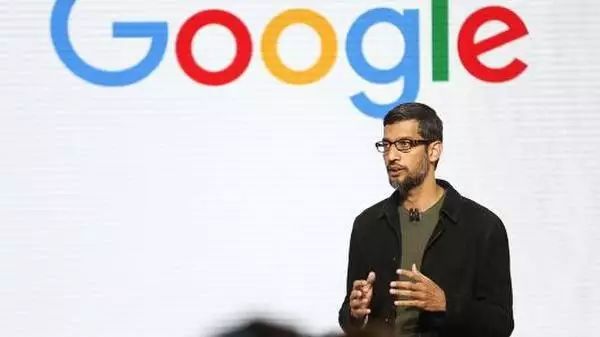 Sridhar Ramaswamy says there's also a bottom line to advertising, which can have a serious impact on the user experience, can lead to serious boredom, and hurt Google and the product image, so block it. However, Sridhar Ramaswamy also stressed that blocking web ads was a very contradictory decision that could lead some people to completely block all types of ads, reducing the revenue of content creators, media editors, web developers, photographers, and others who rely heavily on advertising revenue.

The conscience of the industry!

4
Vision CHINE, the French edition of China Newsweek, was published

According to ChinaNews.com On May 29, Vision CHINE, a French-language monthly magazine owned by China News Agency, was officially published in France. The cover story of vision CHINE's first issue focuses on infertility in China. 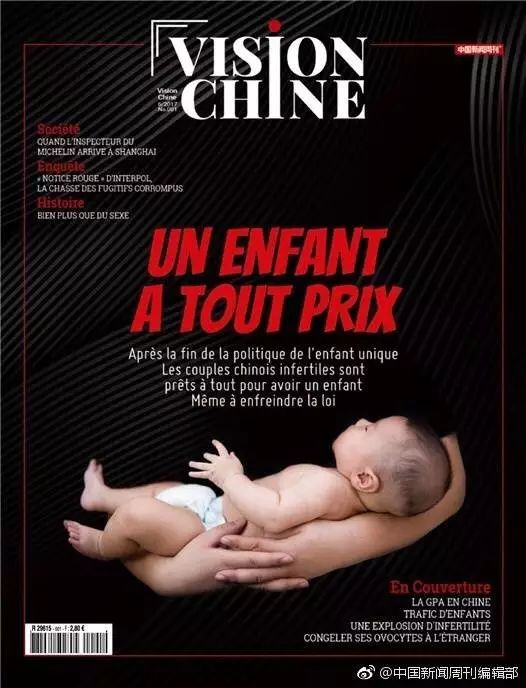 The French-language version of China Newsweek, VISION CHINE, is jointly published by China News Agency and france's Euronews, and so far, China Newsweek has formed a multi-language cluster published in France, the United States, Japan, South Korea, Italy, South Asia, the United Kingdom and other countries and regions.

Vision CHINE, the French-language edition of China Newsweek, is aimed at global French-speaking readers with the aim of reporting major events in a timely manner, in-depth analysis of social hot spots, and a multi-angle all-round display of the changing China. Its target audience is high-level and core decision-makers of the French government, political, business, academic elite think tanks, opinion leaders, as well as the global French-speaking readership concerned about China's current situation, love of Chinese culture, interested in China to seek development opportunities for entrepreneurs, artists and ordinary people.

China Newsweek's French-language version of VISION CHINE is currently sold in major french newsstands, and is the only Chinese-based comprehensive magazine to enter the mainstream sales channels in France. At the same time, the magazine has set up distribution and distribution points in the French Presidential Office, the Prime Minister's Office, the National Assembly, the Senate and various ministries. The magazine will be published in the French-speaking countries of Belgium, Switzerland and Luxembourg around France in the future and further extended to French-speaking countries around the world.

I hope I can show the world a different China

According to public information, the overall market size of pre-release advertising exceeded 2 billion in 2015, while the value of pre-release advertising in cinemas reached 3 billion yuan in 2016.This year has continued to grow at a high rate, with cinema video advertising increasing by 14%, 9%, 43% and 44% respectively in January-April 2017, according to CTR. Cinema media advertising has maintained a high level of business climate, with industry growth of 64% and 45% respectively in 2015-2016, and growth again up to more than 40% after March 2017.

Yien.com predicts that the pre-release and patch advertising market is expected to reach 20 billion yuan in industry revenue by 2020.As of the first half of 2017, the total number of screens in China has reached nearly 45,000, the number of advertising development accounted for about 60%, there is still a large room for expansion, pre-show advertising penetration rate quickly increased to drive the industry's business climate as the core factor.

In cinemas, pre-screening ads do have a high arrival rate!

New list recruitment focuses on new media industry recruitment, whether it is recruiters or job seekers here can get the required, so that talented people find the right stage as soon as possible, so that content start-ups more quickly recruit to the "pillar talent", scan the following QR code or click "read the original" to see more job details:

Industry conscience! Google Chrome is determined to hit out at web ads Media intelligence
Up to 200 words, currently totalWord.