On September 21st AppAnnie released its latest report, which said television advertising had become increasingly important as a channel for mobile game developers to acquire new and re-engage older users.

App Annie's data discovery through Video Research and Electric,Television advertising costs for mobile games in the Japanese market are growing steadily.From 2013 to 2015, TV ad costs for in-data games increased by nearly 70 percent, according to Video Research.

Since 2013, TV ads for mobile games in the Japanese market have become increasingly focused on older games, demonstrating the importance of attracting older users through this channel.

Generally speaking, the first month of mobile game TV advertising in the Japanese market,Downloads and revenue increased by about 225% and 25%, respectively, from the previous month.

But in terms of downloads, TV ads seem to have a big boost for both RPG and non-RPG games. This means that TV ads leave a lot of opportunities for non-RPG games.

Here are the details of the report:

Japan has always been one of the world's leading mobile gaming markets, and the iOS App Store and Google Play generate far more revenue than other countries. Such a brilliant achievement is due to Japan's long history of gaming. Japan has always been home to many of the world's game enthusiasts, creating a number of high-profile games, including Pac-Man, Mario and Pokémon. Of course, today's Japanese game culture has been completely transformed into mobile games. AppAnnie discusses in the Understanding the Japanese Mobile Game Market report that Japanese gamers tend to be more engaged and willing to pay for it than in other countries. Japan's best-selling game ARPU is ahead of other major markets

While the opportunities in the Japanese market are attractive, competition is also recognized as fierce, especially for foreign publishers: 90% of mobile gaming revenue in the Japanese market in 2015 was covered by local companies. The key for publishers to gain a place in this rewarding but challenging market is to build visibility and drive user acquisition. According to Video Research, mobile gaming advertising costs in the Japanese market exploded between 2013 and 2015

According to Video Research, TV advertising costs for mobile games in Japan continue to climb, increasing by nearly 70% from 2013 to 2015. The steady increase in costs shows that television advertising is still very effective as a user access channel. 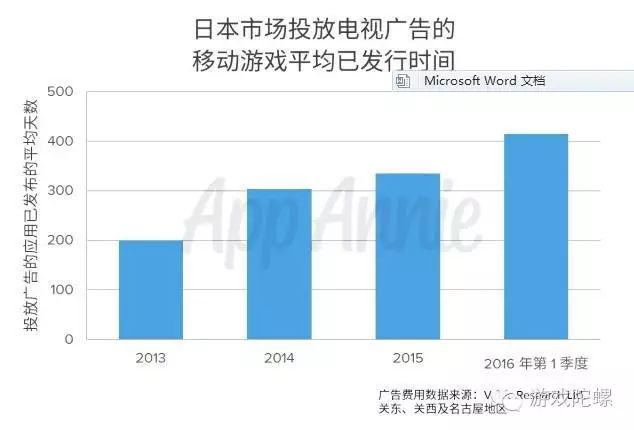 Since 2013, the release time of mobile games for television advertising in the Japanese market has been increasing.

This trend is a testament to the continued success of Japan's mobile gaming veterans. Classic old games such as "Puzzle and Dragons" and "Monster Strike" are still being promoted and are making huge revenues at the same time. Thus, TV advertising is not only suitable for new games to acquire users, but also more and more old applications to attract old users again.

To assess the impact of mobile game TV ads in Japan, App Annie compared downloads and revenue in the first month of ad launch with data from the previous month. Analysis shows that in the first month of advertising, both indicators tend to improve significantly. Although other channel advertising and power factors are not taken into account at the same time, this analysis can help to analyze the impact of TV advertising on Japanese games.

There was a significant increase on both fronts: revenue grew by about 25%, while the average percentage increase in downloads was much higher, reaching nearly 225%. In general, mobile game downloads in Japan increased significantly in the first month of TV advertising.

Given the general pattern behind the application market, the differences between the two types of data are also expected. Download volume is the first key metric that user acquisition activity can affect. Over time, users' game participation has increased, and revenues have tended to rise. The 225% increase in downloads provides a solid foundation for future revenue growth. Moreover, the average 25% increase in first-month income is not to be underestimated in itself. This growth comes not only from newly acquired paid users, but also from older players who are re-playing with ads. In Japan, for example, there are often advertisements promoting special events in the game. Action class RPG "Monster Marble" uses this strategy to promote in-game activities, more than such advertising.

RPG advertising costs more than other types of games

As described in Understanding the Japanese Mobile Game Market, RPG is second to none in the Japanese mobile gaming market and is often more profitable than other game types. In addition to being outstanding in terms of single user usage and length of time, Japan RPG also has a higher ARPU than other categories. Behind this performance is the long RPG tradition in the Japanese market. Famous hosts of RPG series such as Final Fantasy, Dragon Quest and Monster HunterMobile RPGs such as Monster Hunter, as well as The White Cat Project and Gran Blue Fantasy, originated in Japan. 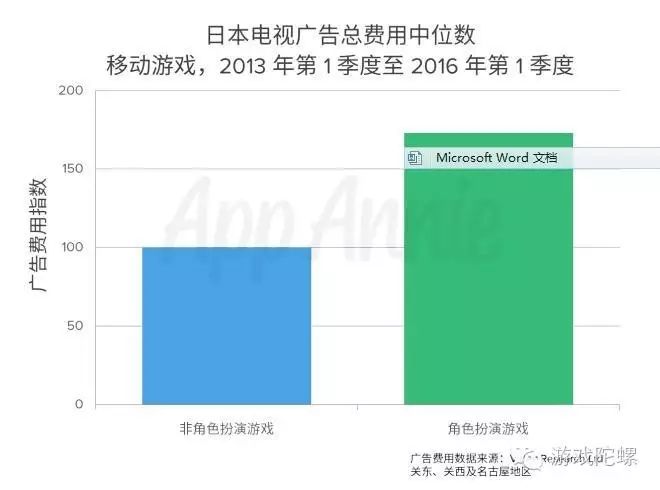 App Annie's analysis of Telecom's TV advertising data shows that RPG has an overall advantage in Japan's mobile gaming market. App Annie found that, based on the data, the median tv advertising cost for RPG (by electricity classification) was 75% higher than the non-RPG median, roughly the same as the median income ratio for both RPG and non-RPG.

Both RPG and non-RPG games can benefit from TV advertising.

Studies have shown that there is a clear positive correlation between the average increase in downloads and the average ad cost, whether non-RPG or RPG. In other words, games with higher advertising costs tend to experience significant changes in downloads during ad periods. This approach is not perfect because advertising that is also invested in other channels can be an uncalculated growth variable. But this apparent relationship suggests that there will be a significant increase in the number of months in which more ads are placed than in months when no ads are running. 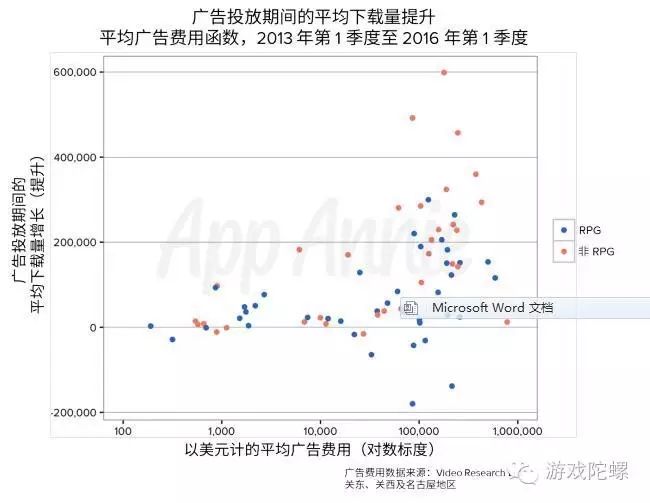 Despite the high median TV advertising costs in the Japanese market, there is a similar relationship between advertising costs and increased downloads, whether RPG or non-RPG. In fact, in the Japanese market, non-RPG downloads seem to be more sensitive to TV advertising costs than RPG, considering that the most important thing for non-RPG is to acquire new users, and RPG's key is to attract older users. Of course, this result needs to be validated with more in-depth analysis. This data at least shows that non-RPG is not much different from RPG in terms of benefiting from TELEVISION advertising.

As mentioned above, given that RPG has a relatively large number of TV ads available, TV advertising is a great opportunity for non-RPG publishers who want to delve deeper into the Japanese market.

During ad serving, there is also a positive correlation between average ad spend and average revenue growth. The more you spend on advertising, especially if you spend more than $10,000 a month, the greater the increase in game revenue during the ad period. 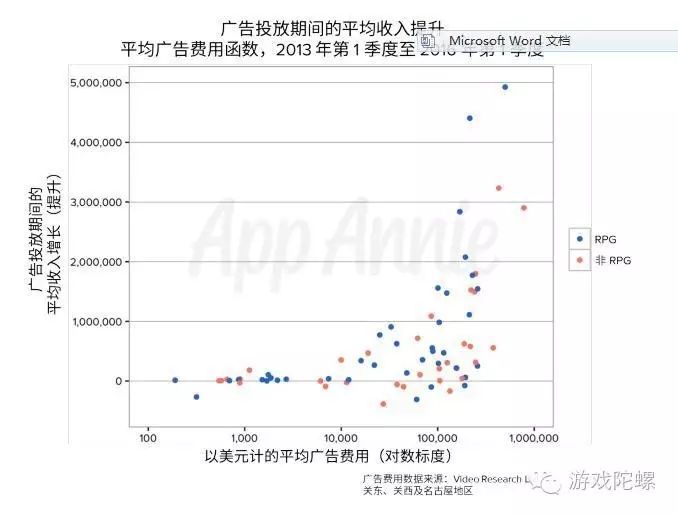 It has been observed that, as with downloads, there is a positive correlation between average revenue increases and average advertising costs.

As the market with the highest revenue from the iOS App Store and Google Play, Japan plays an important role in the overall mobile app economy. Japan's mobile game TV advertising costs have soared, underscoring the channel's growing importance in acquiring new and attracting older users. The average download volume and revenue of mobile games increased significantly in the first month of advertising, which is strongly supported by this. Although RPG's median total TV advertising costs in japan's mobile gaming market are higher than in other categories, App Annie analysis shows that non-RPG, like RPG, can get value from TV ads. This suggests that non-RPG has more opportunities to benefit from the increasing cost of television advertising in the Japanese market.

Press and hold the QR code on the left to focus