Amazon's "advertising tactics" are taking half the budget, and who's panicking about Google and Facebook?

Amazon's advertising business has jumped to third place in the U.S., according to a previous report by eMarketer, and some advertisers are moving more than half of their online advertising budgets from Google to Amazon, CNBC reported, citing anonymous sources. While this information has shocked the advertising industry across the United States, it has also put pressure on Google and Facebook. However, in terms of the structure of Amazon's own business, the positioning of its advertising business may only complement other businesses, while at the industry level, it is more likely to be affected by Facebook than Google. 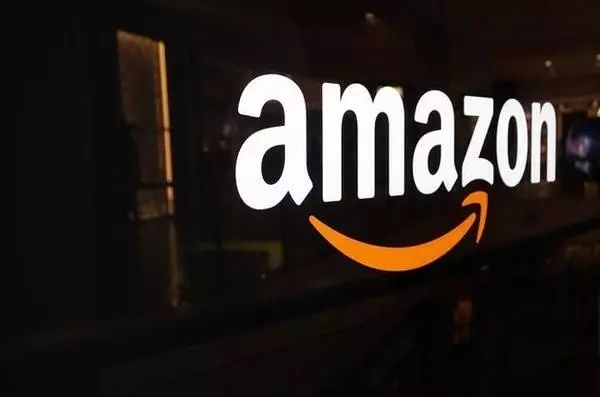 Steve Brazier, CEO of Canalys, a giant of market analysts for the technology industry, has been less bullish on Amazon's cloud business, AWS.

Despite THES's unusually rapid growth and its position as the world's number one market share, According to Brazier's calculations, AWS is continuing to make losses, and Amazon's debt will become vulnerable in the face of a Fed rate hike. However, his mind is beginning to change recently.

Amazon reported $2.2 billion in advertising sales in the second quarter, up 129 percent from a year earlier. According to eMarketer, Amazon's market share in the U.S. advertising industry is already among the top three in the U.S. Brazier acknowledged that this exceeded Canalys' expectations, and said the revenue offset AWS' quarterly capital expenditures.

Amazon's capital expenditure in the second quarter was $2.9 billion, according to The Register, mainly for the expansion of its retail business and AWS' high-tech infrastructure.

Previously, Brazier argued, "Amazon's long-term big investments are unsustainable because they don't have enough cash flow." "However, he is impressed by Amazon's performance in high-margin advertising, " which allows it to significantly improve its balance sheet, after all, its free cash flow is still very low in terms of their current volume." "

Of course, the rise of Amazon's advertising business has brought about more than that, and it is clear that the twin oligarchs in the US advertising market, Google's parent company Alphabet (googled after Alphabet) and Facebook, are feeling the threat.

Amazon's advertising tactics have caused a shock in the industry

In the face of a strong invasion of Amazon's advertising business, Google must have a familiar feeling, after all, this has not only happened once, and the last time the door-to-door kick-off is now the second-largest advertising market in the United States - Facebook.

For now, Google still seems to be sitting on the diaoyutai.

According to CNBC's previous reports, Google's advertising business was not only unaffected, but even rose in the first half of the year. In fact, in the eyes of many in the industry, Amazon, while unlikely to replace Google, is likely to take Facebook's place.

Whether it's search ads or display ads, Google is doing well, and many advertisers are using Google's back-end system to reach customers, and in many cases, Amazon actually depends on Google to help it stream. Although Amazon has broken many traditional business models by digitizing, no one seems to have played Google in this regard. At the same time, both sides are aggressively expanding into new areas, devouring small players like big fish eating small fish, providing advertisers with more convenient tools and services for more accurate ad delivery.

Facebook is more of a publisher than Google and Amazon, two e-commerce leaders, and most of the consumer's business activity takes place outside its pages. At the same time, while Facebook also has a lot of data, Amazon's data volume is much larger, and the data is directly linked to consumer buying behavior. In addition, Amazon's huge Prime membership base and the world's leading cloud services give it access to other data. There doesn't seem to be much correlation between these different businesses, but to some extent it can create a synergy that works with a effect of 1 to 1 greater than 2. 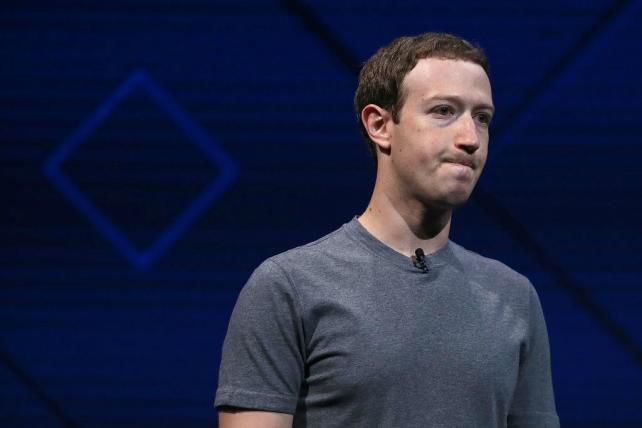 Of course, Amazon has never been involved in "fake news" or data breaches that Facebook has encountered. Advertisers also don't have to worry about their ads being placed near unwelcome or controversial content.

But even so, how far can Amazon advertising go? 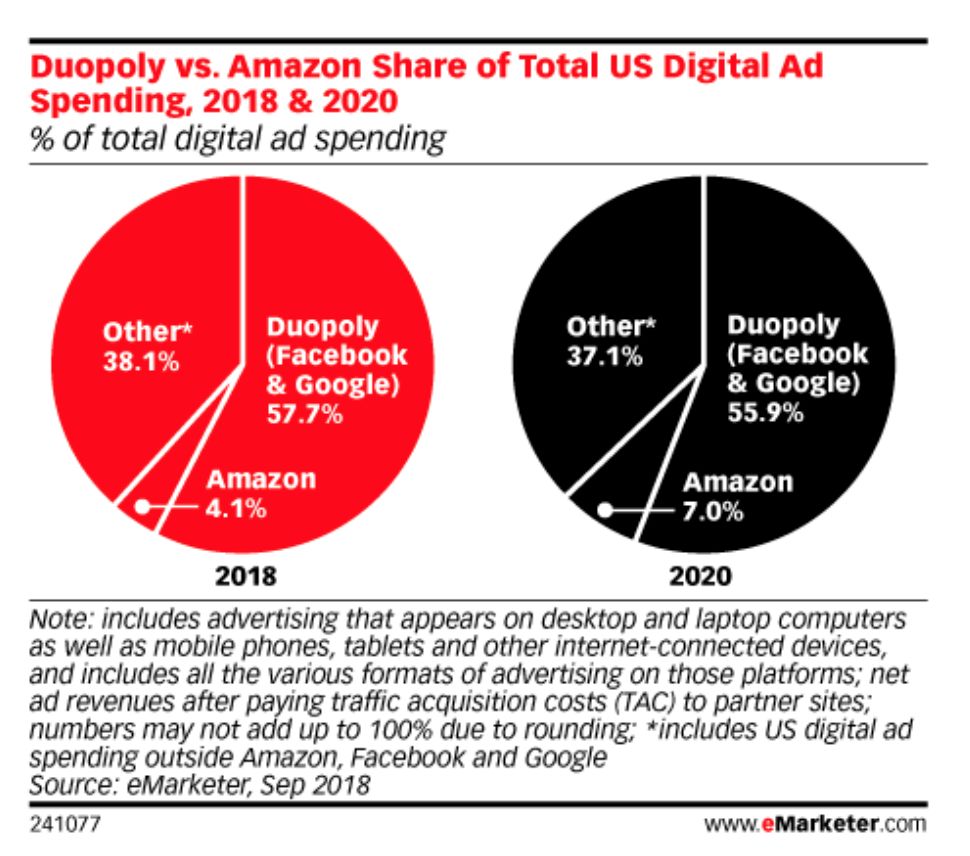 CNBC recently reported that some advertisers are shifting more than half of their advertising budgets from Google to Amazon's advertising platform for hundreds of millions of dollars. So what attracted these advertisers?

About 49 percent of product searches start on Amazon.com, according to CNBC, citing Survata. At the end of 2017, Amazon had nearly 200 million unique monthly visitors, according to comScore. In July, CIRP, a research firm, estimated that Amazon Prime had 100 million members in the U.S., and That Prime Day has become a popular national cultural phenomenon for the media and consumers, with a heat comparable to Black Friday. Meanwhile, Amazon's Fire TV has become the second most popular streaming device in the U.S., according to Parks Associates, and its smart speaker Echo is an industry leader. Of course, by acquiring Whole Foods, Amazon could also integrate offline and online shopping to learn more about consumers' shopping habits and history.

In addition, traditional ads can take weeks to evaluate delivery, compared with just a few hours on Amazon. As a result, advertisers can quickly adjust their delivery strategy and ultimately get better results.

However, from the descriptions of many small retailers, the experience of running ads on Amazon's platform is not very good. They often complain that Amazon's advertising programs are difficult to operate and often need to find third-party agencies to help develop an operational strategy. After all, in the limited space facing many competitors, no one can easily stand out.

It's clear that Amazon's self-service advertising system needs to be further refined compared to Google and Facebook. Of course, Amazon has begun to make changes.

"Amazon's goal is to provide thousands of advertisers with simple, intuitive advertising solutions that help them increase sales, and this merger brings us one step closer to that goal." Paul Kotas, Amazon's senior vice president of advertising, said in a blog post.

However, amazon's advertising revenue in the US will account for only 2 per cent of the group's total revenue this year, according to eMarketer. Still, the business can't be ignored. On an investor conference call in July, Amazon CFO Brian Olsavsky called Amazon's advertising business a "rising star" that "begins to have an impact on Amazon's overall profits."

Amazon, the world's largest product search engine, certainly has its inherent advantages, and Amazon is beginning to take advantage of them. As the business ecosystem continues to enrich, Amazon continues to bring new ways of promoting advertisers. We believe that while the advertising business will not bring about fundamental changes in Amazon's business structure, it can indeed be an important complement to Amazon's core business if it continues to grow steadily. 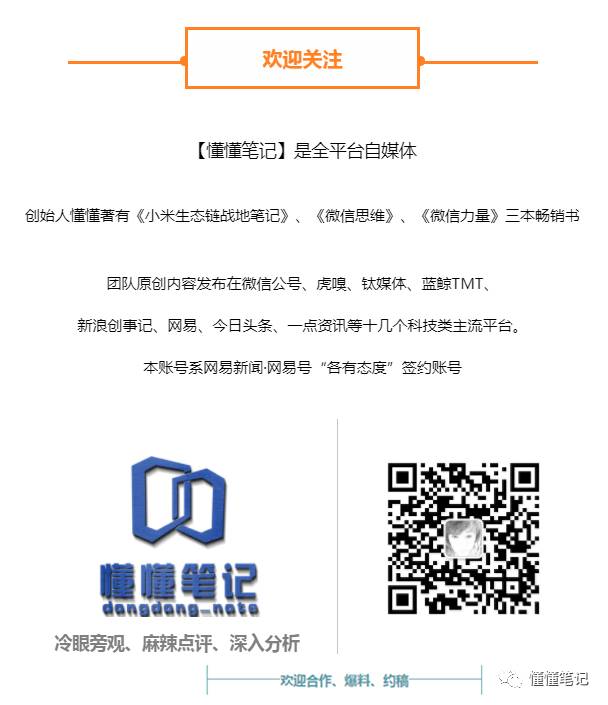 Amazon's "advertising tactics" are taking half the budget, and who's panicking about Google and Facebook?
Up to 200 words, currently totalWord.

It's precision advertising again! On the first anniversary of the GDPR, Google was investigated for allegedly leaking user browsing data
Facebook will compete with Google in the online advertising market
DeepPOINT . . Want to maximize ad performance? Google's update can't be missed!
Google has also been fined $500 million for false advertising Baidu?
Why is machine learning widely used in Google's advertising system and rarely in search sorting?