Advertising performance is not ideal, to a large extent, your advertising strategy is wrong!

For a long time, Lao Wei has been practicing the principle of "do more than words", continue to improve, accumulatively wrote more than 1193 articles, sharing cross-border e-commerce operation experience, a total reading volume of more than 10 million people. 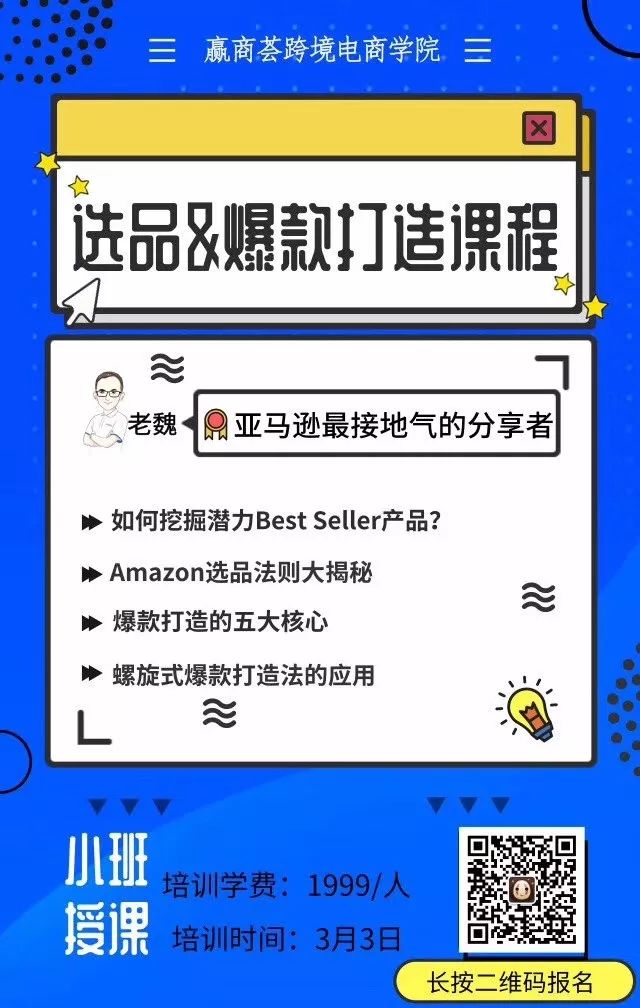 For Amazon in-site advertising, run or not, the result of the order results are almost immediate, a not-so-bad performance of Listing, as long as the station ads, the number of orders will inevitably increase, and a running ads listing, if for any reason to stop the ads, Listing's total order number will also have a relatively large decline. Although the results of advertising are obvious to all, but how effective, but because of different sellers of different strategies and very different.

The following summary of a few often asked by the seller's friends, is a brick-throwing jade, we come together to re-examine their understanding and understanding of advertising.

First, low-cost products how to advertise?

In the current amazon platform competition is becoming more and more intense, advertising bidding is generally rising, low-cost products are very thin profits, from the input-output ratio point of view, to a large extent not suitable for advertising.

Therefore, for low-priced products, in advertising, we should uphold the concept of two aspects:

(i) If only in order to obtain orders, plus Listing ranking, you can be slightly a large number of delivery, such delivery, can temporarily do not pay attention to the input-output ratio, only the number of orders generated by advertising and order conversion rate (I often emphasize the spiral burst to create the first phase of advertising purposes here);

Second, during the delivery process, the ideal ACOS value should be what?

From a practical operational perspective, ACOS has several reference values:

(1) The ACOS value is less than the gross margin of the product:At this point, if you do not consider the possible return rate, advertising itself input-output ratio is cost-effective, advertising is bound to be profitable;

(ii) The ACOS value is equal to the gross margin of the product:In this ethonthonal formula, on the face of it, advertising does not generate excess profits for operations, but if you compare ad orders, natural orders, and total orders, you may find that in the comparison before and after the ad runs, the total number of orders minus the number of ad orders will most likely result in more than the number of natural orders before the ad, that is, as the ads run, as the ads generate a portion of the order, the number of orders for natural traffic also increases, which is the increase in advertising So, if your ad ACOS value is exactly equal to gross margin, then in my opinion, this ad is also worth continuing to run;

(iii) The ACOS value is higher than the gross margin of the product:If the proportion is not high, the total amount in the acceptable range, such advertising is naturally not to worry about, but if the ACOS value is too high, and after a period of advertising optimization, ACOS value is effectively reduced, at this time, it is necessary to suspend or stop advertising, from the Listing optimization, market analysis and other angles to find reasons, perhaps not good enough, perhaps the market is not suitable, in short, only to find out the real reasons, in order to develop a targeted response strategy.

Third, what kind of products are necessary to run in-station advertising?

(1) If the unit price of the product is too low, it should be placed with caution;

(2) Advertising should be focused, to avoid average delivery, to put the advertising budget on top of the products they are focusing on building;

(4) For the long-term input-output ratio is not cost-effective, after all kinds of optimization still can not beat the expected Listing, but also to suspend advertising, can not determine the cause of the loss, not blind movement is also a worthy of thinking about the operation method;

Four, put on the station ads, but not alone, what reason?

As I mentioned at the beginning of this article, the general result of ad serving is to generate orders that are independent of natural traffic, but if your Listing is running in-site ads, it's still not enough to consider the following factors:

(a) Advertising data is too small, time is too short: if the ad just opened, the number of ad clicks is also very small, in this case, even if no order, should not be anxious, the data volume is large enough to generate the basis of the order, so, either patiently observe, or increase the advertising auction and other ways to increase the number of ad clicks and then observe;

(2) Listing optimization is not in place, resulting in either Listing is not recognized by the system, the system is not accurate, matching not the appropriate display location, in this case, the advertising effect is bound to be poor, at this time, the work that needs to be done includes optimizing Listing's class selection, keywords in the title, the main diagram and other content;

(iii) Listing price is high, review quantity is small, star rating difference: in operation should pay attention to learn horizontal comparative thinking, to compare their Listing and competitive peers, on the basis of Listing performance, only the price of products competitive, product Review is good enough, in this case the conversion rate of advertising will be higher;

Only when the ad is optimized during the run of the ad, the performance of the ad may be better, the ad process based on the analysis of ad data after optimization includes three aspects:

(i) Ad data anti-phagy ad bidding and budget: aroundExposures, clicks, orders, and ACOSFour core variables, if the exposure is too small, appropriately increase the advertising auction, if the exposure is sufficient and clicks are not much, need to return to Listing optimization, and if the number of clicks and the number of orders is small, then to reflect on whether it is because the unit price is not competitive, or Listing page display is not good enough, did not stimulate consumers' desire to buy, and finally, the seller needs to be based on the first three variables combing and optimization, so that the advertising ACOS value returned to a reasonable range;

(iii) Reverse Listing optimization based on advertising data: For the "three high" keywords mentioned in (ii), it is also necessary for sellers to compare with their own Listing details, if some keywords are not reflected in Listing, then it is very necessary to add them in the later optimization to increase the quality score of these keywords, thereby increasing exposure and reducing advertising costs;

Six, how to prevent malicious clicks in the operation of ads?

Relatively speaking, Amazon has its own error correction mechanism, if the system detects a large number of malicious clicks, the platform will pay back the cost of these clicks to the seller, but at the same time, there will be some clicks can not be detected by the system, the most typical is in the competition peer to do market research and analysis of non-malicious but can not bring conversion clicks, how to prevent this part of the click? The most effective way is to adjust your ad bidding in time.

► Accounts are restricted, goods are forcibly removed, bad things happen one after another

► Are there any shadows of you in these two cases?

► In operations, should I focus on large or small category rankings?

► Operations have to go through narrow doors and do the right thing, not the easy thing

Advertising performance is not ideal, to a large extent, your advertising strategy is wrong!
Up to 200 words, currently totalWord.