There have been a lot of big events in the global technology industry this year, some of which are strange and some of which feel terrible. Recode summarizes these events in 2017 and presents them graphicly.

Trump has been a hot topic from start to finish

If you feel that U.S. President Donald Trump has dominated this year's press, that's right. The news media keeps posting about Trump. According to Parse.ly Insights, news pages about Trump have been viewed more than any other major topic. Parse.ly tracks content attention from hundreds of mainstream publishers around the world. 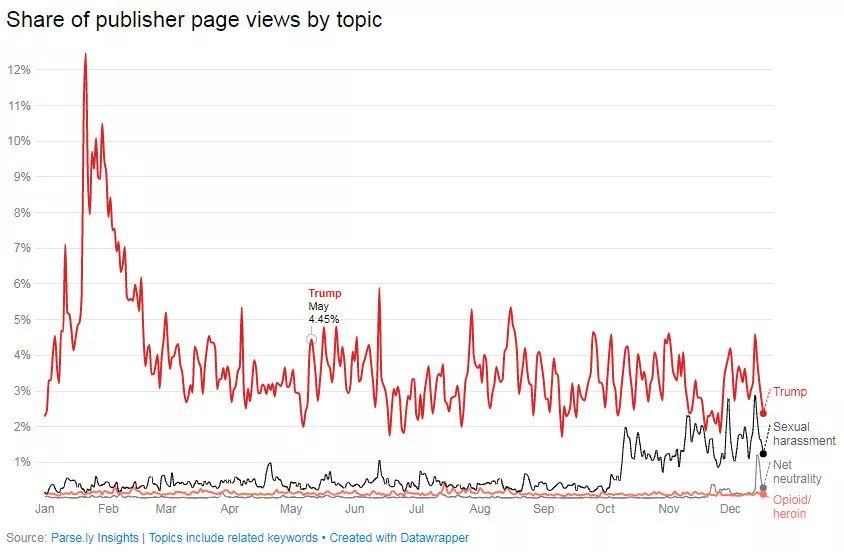 Articles about Trump are read more than articles about sexual harassment, drugs, net neutrality, Uber and artificial intelligence. Overall, in Parse.ly's network, articles referring to Trump accounted for 5% of total page views in 2017。

Interest in the keyword "sexual harassment" hit a record high in Google's search engine this month. Reports of sexual harassment by Harvey Weinstein, a prominent Hollywood producer, have sparked a heated debate on the subject this year.

Suddenly, powerful men were held accountable for sexual harassment, and dozens of exposed sexual harassers lost their jobs. Encouraged by these events, a similar hashtag has been launched on social media. Women have come together to fight sexual harassment. 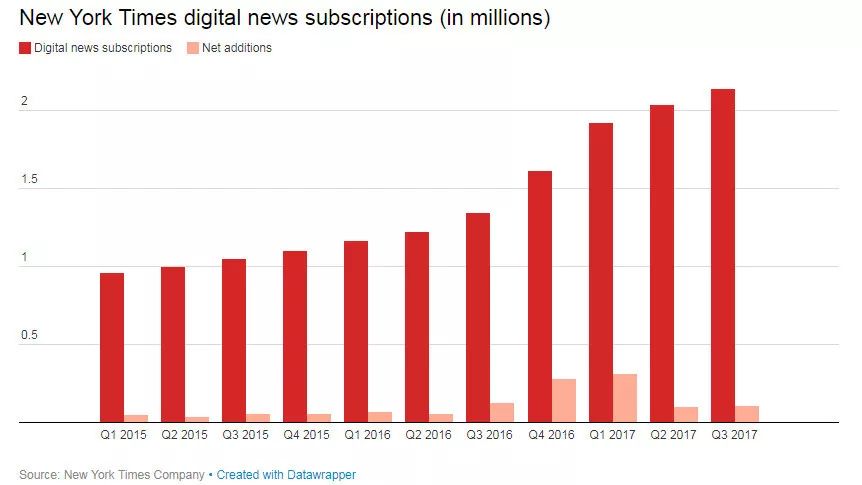 In the first three quarters of this year, The New York Times added more than half a million subscribers, higher than for the whole of last year. The shift from an advertising-based business model to a paid subscription-based model helped the New York Times save itself.

Uber's executive team is in turmoil

Uber's executive team has changed dramatically this year as a result of a series of public relations disasters, from alleged theft of trade secrets to internal sexual harassment and sexism. 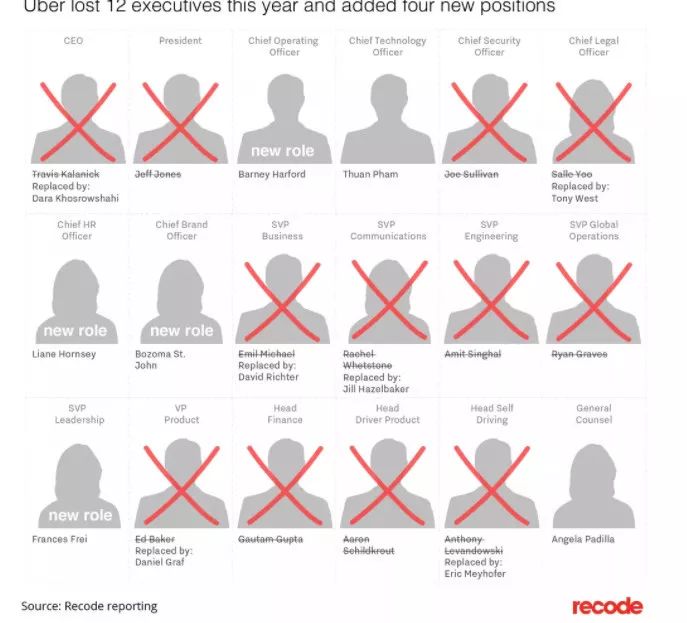 The incidents led to the departure of several executives from Uber, including co-founder Travis Kalanick. Uber, meanwhile, is looking for new candidates to fill those vacancies. 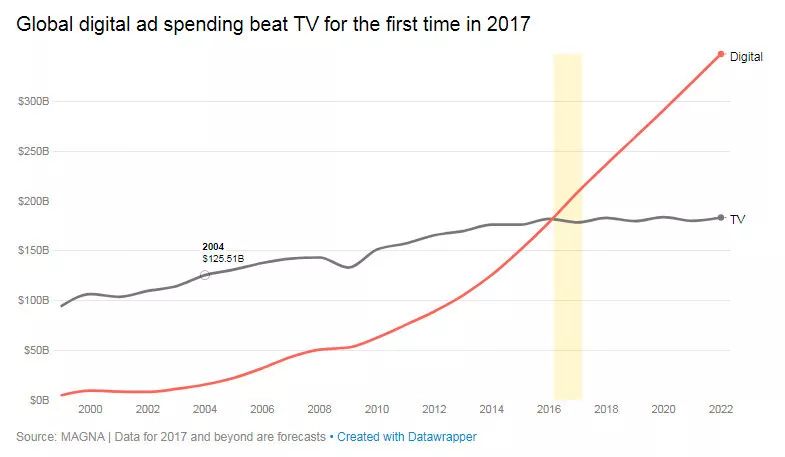 6. Bitcoin mania is sweeping the world

Bitcoin prices have risen sharply this year. This month, the price exceeded $19,000, nearly 20 times the price at the start of the year.

The rise in the price of Bitcoin has prompted everyone to either buy bitcoin or regret not buying it.

This year, Japan's SoftBank took part in more than half of Silicon Valley's 10 venture capital investments. 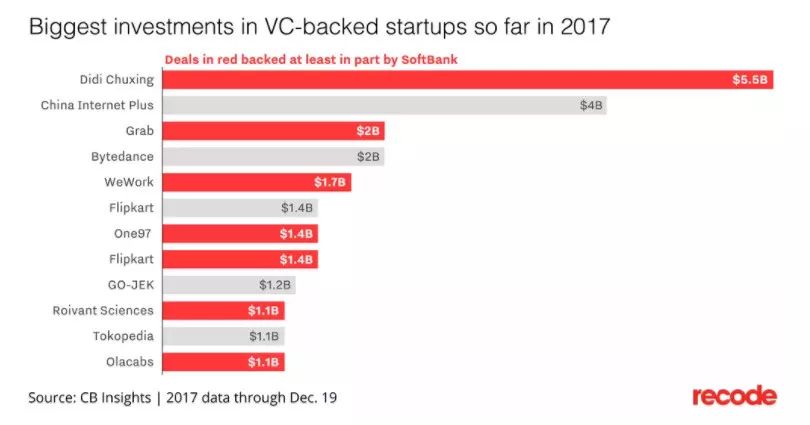 SoftBank has transformed the global venture capital industry this year, led by Mr Sun. The $100bn SoftBank Vision Fund is a hero to startups and a nightmare for other venture capital firms.

8. Driverless cars are beginning to become a reality

In 2017, driverless cars are moving from concept to reality. Google's Waymo, a leader in driverless technology, has accumulated 4 million miles of self-driving tests on public roads this year, 2 million of which were completed in 2017, equivalent to the past seven years combined. 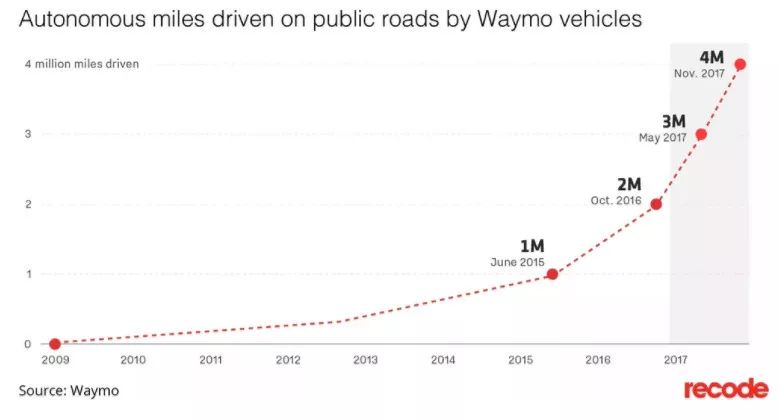 In addition, the U.S. House of Representatives approved a bill to support the testing and commercial use of driverless cars. A similar bill is about to be debated in the Senate.

As a simple toy, fingertip gyro has become a cultural phenomenon this year.

U.S. interest in fingertip gyro peaked in April and in global markets in May, according to Google Search.

In the summer of 2016, Instagram launched the Snapchat Stories feature. By early 2017, Instagram Stories had more daily active users than Snapchat. 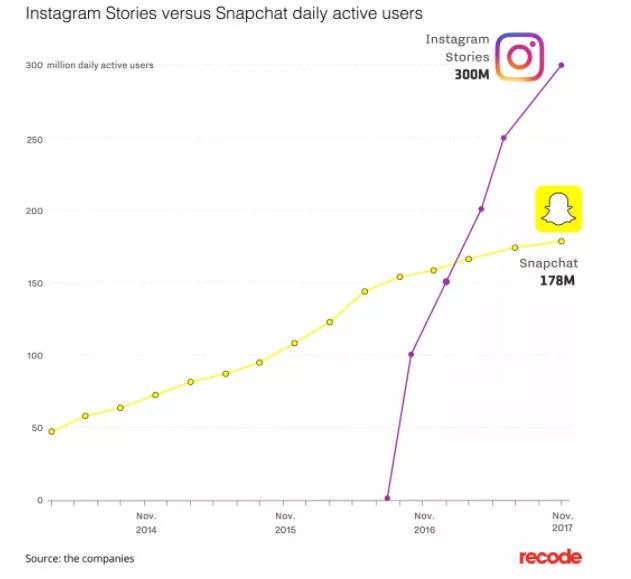 According to a recent report, Instagram Stories has 100 million more users than Snapchat. This means that the cottage version is more popular than the original version. 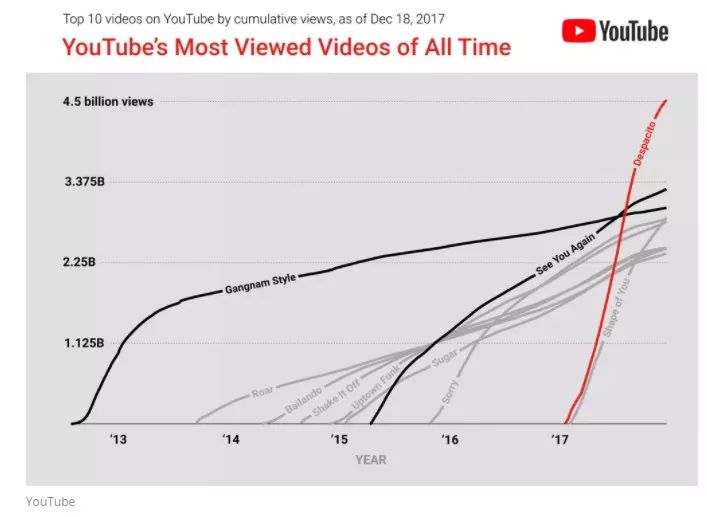 The Spanish-language song far outstripped its competitors. This year, the song's music video has been viewed more than 4.5 billion times on YouTube, surpassing previous record-keepers Gangnam Style and See You Again.

11 charts to see the tech industry in 2017: Digital advertising spending outsoed television advertising for the first time
Up to 200 words, currently totalWord.

喜欢此内容的人还喜欢
微信扫一扫
使用小程序
Cancel. 允许
Cancel. 允许
微信版本过低
当前微信版本不支持该功能，请升级至最新版本。
I know. 前往更新
确定删除回复吗？
Cancel. 删除
知道了
长按识别前往小程序
SHARE ON TwitterRedditTumblrEmailBufferLinkedInPin It
How much money do people have? 71% of China's digital advertising spending is wasted
These numbers start with a call, either an ad or a liar! The girl's three million calls are gone!