Running campaign ads on China's official YouTube channel? The Trump campaign was quick to clarify that it was not intentional.

U.S. President Donald Trump's crackdown on Chinese official media has been ongoing, however, the U.S. media reported on the 13th that the Trump campaign team was recently found to have placed dozens of campaign ads on Chinese state media's YouTube channel... Google explained that political advertising on the YouTube platform is a "wide-ranging marketing campaign" and is not targeted at specific YouTube channels. A spokesman for mr. Trump's campaign also said they did not "intentionally" run ads on those platforms.

The Trump campaign this month ran at least 22 campaign ads on some of China's state-run YouTube channels, Business Insider reported, citing a new survey by Omelas, a Washington-based cybersecurity firm. Not only that, the report shows, but his campaign has also run 39 campaign ads on some Russian-run YouTube channels. It is reported that YouTube is Google's video site, to provide users with download, watch and share videos or short films services. 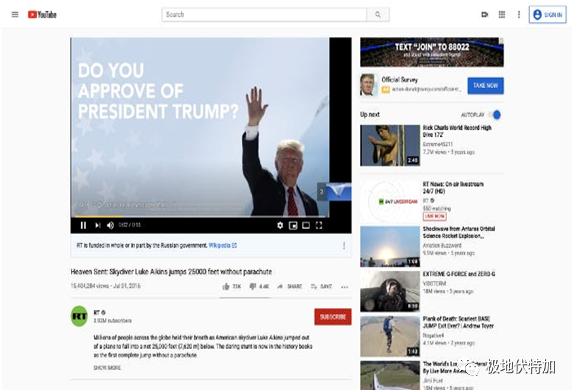 More embarrassingly, it was reported that 55 percent of the Trump campaign's advertising costs on those channels would be transferred from YouTube to those media outlets. In response, Business Insider quipped that it appeared that Donald Trump had made China "a target to help him run for re-election".

In response, Samantha Zager, a spokeswoman for the Trump campaign, reportedly explained that they did not "intentionally" run ads on those platforms. "We are not targeting those YouTube channels," Mr Zag said in a statement sent to Newsweek. But under YouTube's rules, political advertisers around the world can only serve ads based on their age, gender, zip code and content. "

A Google spokeswoman said the study was "misunderstood" because political advertising on the YouTube platform was a "wide-ranging marketing campaign" and was not targeted at specific YouTube channels. "Political advertisers typically campaign on all news channels and point these campaigns widely to users in key states," she said. "

Business Insider, citing a "transparency report" by Google, said the Trump campaign had spent $48 million on ads on Google's platforms since May, while the Omelas report said the ads were less than $25 (about 174 yuan). But Business Insider argues that while the cost is small, the report also proves that the "chaotic online advertising ecosystem" has created "strange trouble" between advertisers and content creators.

In response to the U.S. unreasonable crackdown on Chinese state media, Chinese Foreign Ministry spokesman Zhao Lijian said it was the second time the U.S. had listed Chinese media in U.S. institutions as "foreign missions." "This is another example of the U.S. side's naked political crackdown on the Chinese media, which will further seriously interfere with the normal reporting activities of the Chinese media in the U.S., and further expose the hypocrisy of the so-called 'freedom of the press and freedom of speech' that the U.S. side claims." Zhao Lijian said.

Zhao stressed that we strongly urge the U.S. side to abandon cold war thinking and ideological prejudices, immediately stop and correct this wrong practice, or China will have to make the necessary and legitimate response.

The label is not pointable during preview.
Read the original text.
Read.
Synced to take a look.Write down your thoughts.

Go to "Discovery" - "Take a look at "Browse" Friends Are Watching"

Take a look at the closed entrance.
Open the Take a Look portal in Settings- Universal- Discovery Page Management.
I know.

Running campaign ads on China's official YouTube channel? The Trump campaign was quick to clarify that it was not intentional.
Up to 200 words, current total.Word.