How do games recommended by Apple and Google make ads cash out?

From the game's project to research and development, years of preparation after the online release is considered to be the official start of the "campaign." Now the game into the stock market stage, but the influx of products is more and more, users are increasingly difficult to obtain. To avoid being inundated with products, the App Store and Google Play's recommendations have long been a battleground for game makers.

Six of the games in partnership with UPLTV have been re-called Q1 in 2019 and have been recommended by the App Store or Google Play.All six games have a commercialized model of "IAP (In-Game Purchase) and IAA (Advertising Realization)" and have significantly increased advertising revenue after accessing UPLTV.By analyzing the subject matter types, play mechanisms, advertising design, etc. of these games, developers can also gain valuable experience and practical help.

From the early classic Roller Coaster Tycoon to the world-famous Dream Garden series, countless players have constructed their own kingdoms in the virtual world.But in contrast to the traditionally positive worldview of analog business games, "Everybody Hungry Restaurant" is definitely a "black fairy tale" world.Players as restaurant operators to produce exotic food to the table, recruit customers to eat will produce variations, and in the process, players will get huge in-game benefits, full of black humor and satirical game settings can be said to be fresh!Visually impactful graphics combined with the trendy pixel style of the day, "Everybody Hungry Restaurant" stands out in many games and is featured in Google Play and the App Store.

In addition to setting novelty, "Everybody Hungry Restaurant" advertising realization mechanism is also very ringable.A NPC "TVman" is set up specifically for the game, where you can earn some monetary rewards by watching an ad by "watching TV" here.To avoid negative feelings for players from over-advertising, there is a limit to the number of times you can watch ads each day.Other than thatAfter UPLTV's ad tuning, the game also sets the entrance to the motivational video at several key points that players often touch.In the service meal, upgrade machine and other business links, players can choose to watch a 30-second motivation video to speed up the process, fully meet the player's instant sense of access. 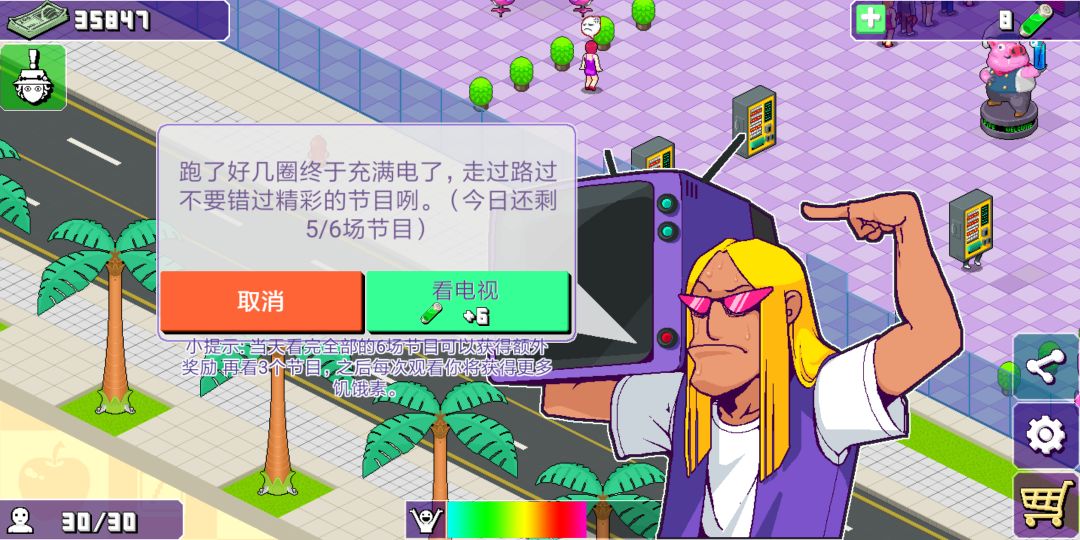 "Everybody Hungry Restaurant" advertising fill is relatively high, almost every scene has an advertising portal.But why not cause the player's disgust?There are two main reasons:First of all, the most critical isA reasonable combination of gameplay and advertisingto ensure the integrity of the game.In addition, the game only set up the form of incentive video advertising,Each ad is displayed at the player's own choice, there will be no ads that affect the game experience, such as strong ads.

Looking back on the history of global game development, western magic theme games are a rich and colorful, many game lovers have swords and magic in mind.However, the ace product of the Cool House game, "The Spirit Knight" is not a magic game!The magic setting of the Daredemort has captured the love of players around the world, whether it's a shooting-loving party or a box-opening collector, and the game can meet demand.The combination of pixel-rated painting style, adventure breakout mode, and TPS (third-person shooter) has made the seemingly simple RPG game "The Revenance Knight" an indie game that's on fire all over the world. 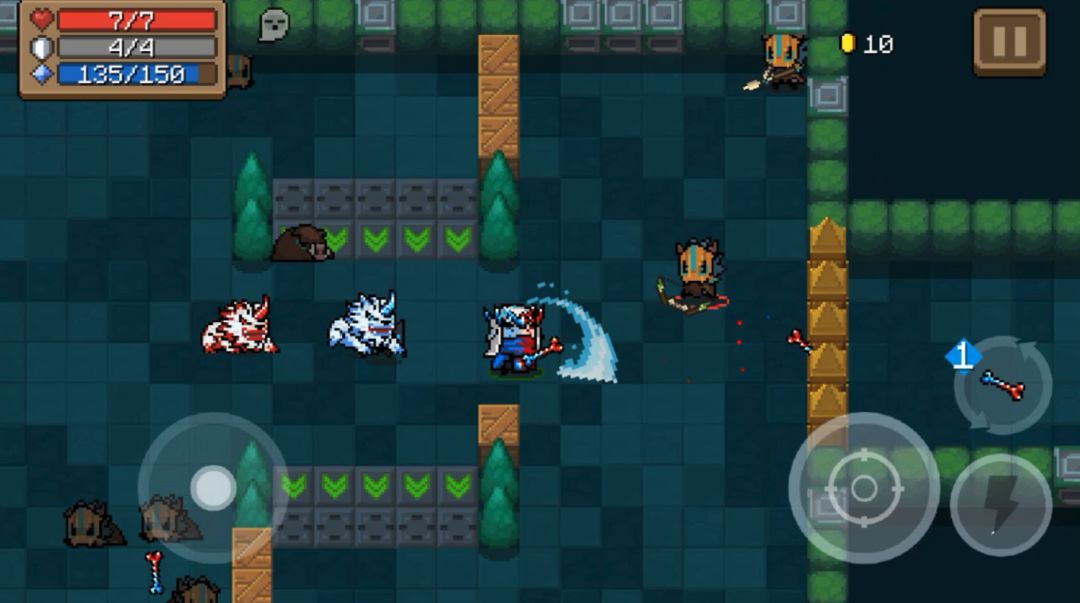 Because of TheRougelike game design and increasing difficulty of customs clearance, the Spirit Knight is not a very mild game.In order to ensure the smoothness of the player's customs clearance, the game's advertising implants are more restrained.Setting up ads in stores is an easy way for players to accept them.Add an incentive video ad entry next to the entrance to the gem purchase and use a prominent logo to remind players to watch the ad.In addition,The number of ad reward currencies is 10% of the lowest gear purchased internally, so players get a strong sense of reward for watching ads. 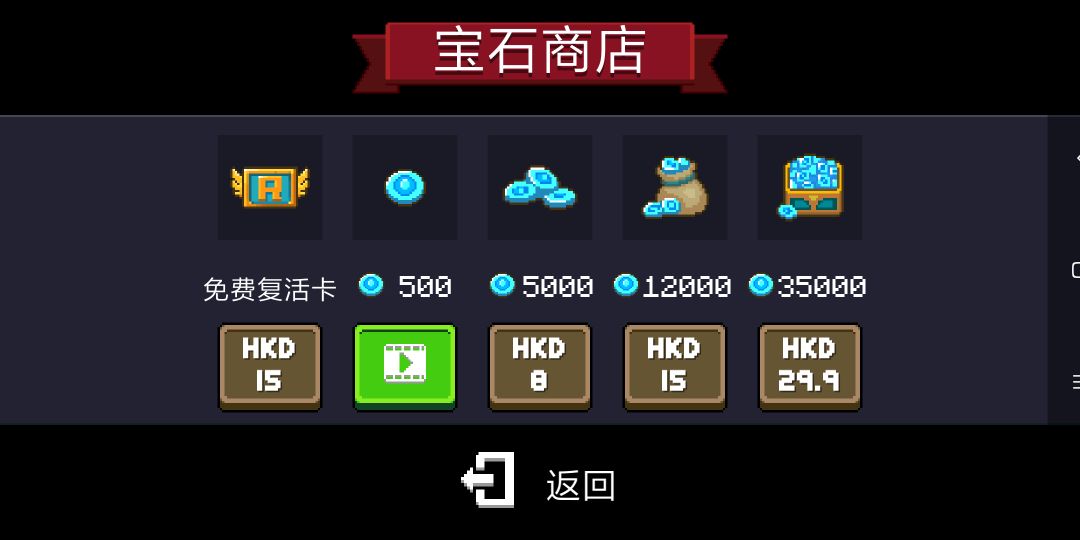 After three weeks of automatic optimization into UPLTV, eCPM and LTV increased by more than 20% and were stable for a long time.

Childhood love to play hide-and-seek, was moved to the mobile phone there is a puzzle-solving game, has also been born "find your sister" and other popular bursts.The game is a test of the player's observation ability and logical thinking, inspiring the player to open the brain and enjoy the sense of accomplishment in solving the mystery."Dream Detective" is a hand-drawn illustration style puzzle game, art is a highlight of the game.In dozens of dream levels, the extremely sophisticated art style gives the player a very different scene experience.The game is very interactive, random click may trigger hidden clues to help clear customs, the scene contains organs can open hidden scenes, the game brain hole is so large that people can't stop playing! 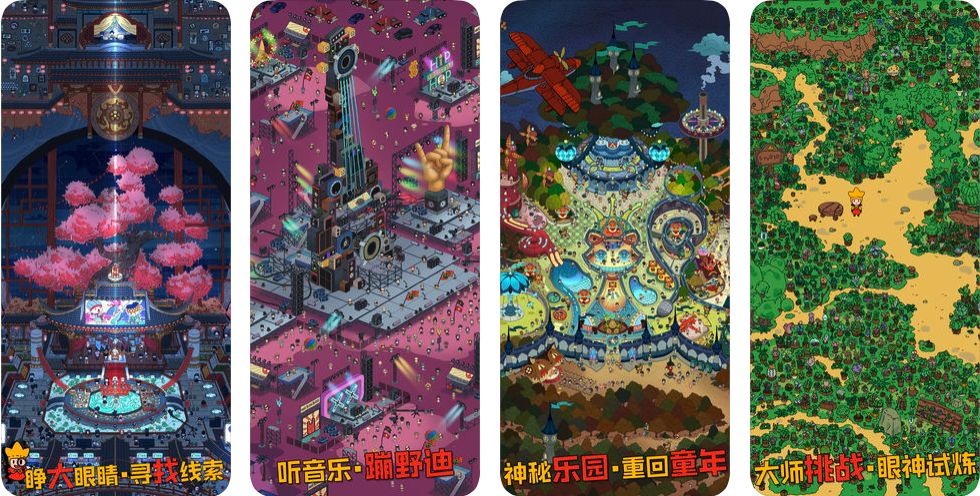 In such games,The player's willingness to solve the mystery is strong, "Dream Detective" advertising change is now also in line with the needs of the player, in a variety of auxiliary props on the incentive video advertising implant.For example, in a store, watching an ad can earn gold coins;At the end of the level, you can double your reward for watching the ad;And in the time-limited level, watching ads can get extra time.In addition, "magnifying glass" props are important props in the game, "Dream Detective" in this advertising set is very friendly.When the level loads, the game informs the player in advance that the Magnifier prop can be used, but an ad will automatically play after customs clearance.If the player does not use a magnifying glass or fails to clear customs, the ad will not play.Developers need to let players know when each ad appears and the rewards they receive to avoid affecting the gaming experience. 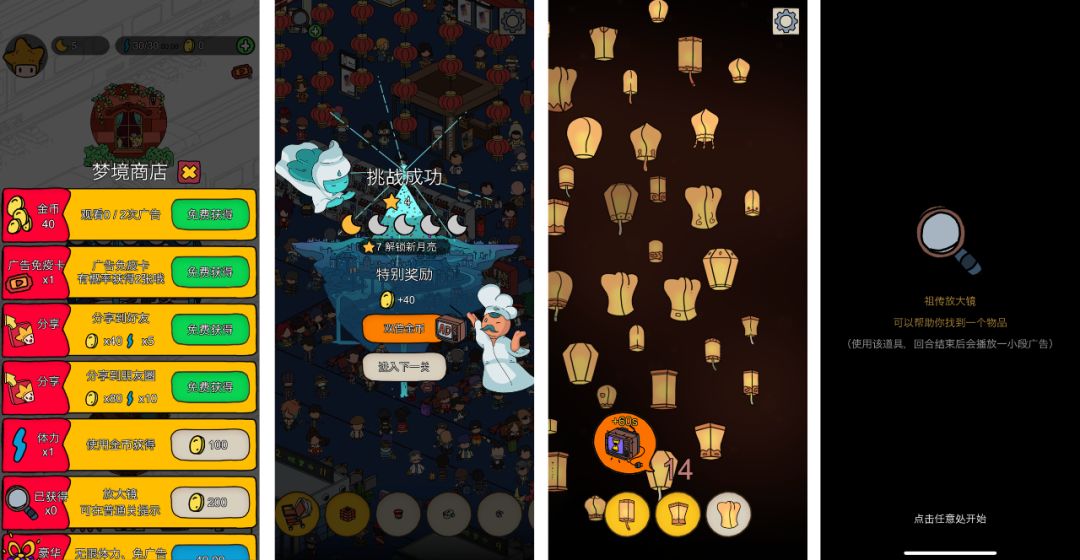 The wonderful combination of "Leisure and Strategy" has resulted in this creative turn-based game, "The Dice Hunter".Each dice has fixed properties, and different attribute combinations can produce different combinations of attack and defense.The dice properties thrown by the player each time are random, but the properties of boss are known, which requires the player to judge the game and use the restraint relationship between the enemy and me to match different dice combinations to defeat boss.

Dice Hunter's ad implants are more restrained, with only the entrance to the motivational video set up in the energy store.Players need to consume energy each time they clear customs, and when they're done, they can choose to top up their currency or watch ads to get energy and continue playing.

The game is called "the ninth art", excellent game developers are not only satisfied with creating fresh play, but began to mainstream art in the "reflection" into the game, so there are many doomsday survival theme games on the market."Survival Geometry" is a doomsday survival simulation game, set to the end of the world view caused by nuclear war, players need to fight with radiation monsters to obtain materials to build underground shelters, so as to get a ray of life.Q Meng's character image and the tense BGM and dark game atmosphere, players in the process of combat formation will also attract attention to environmental protection issues. 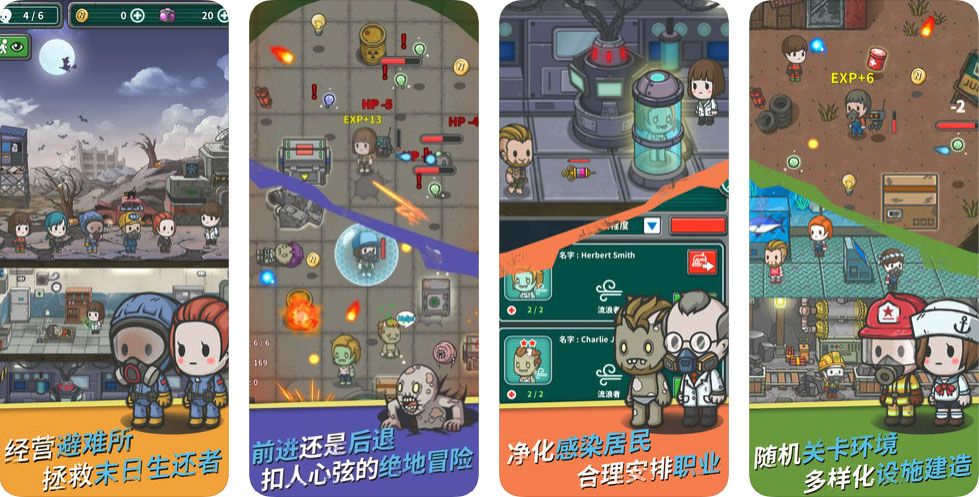 Game ad spaces are set in places that users often touch, such as battle props, post-death resurrection, and so on.In addition, in the dungeon copy there is a blood-added device, players can watch ads to get blood-added Buff, increased battery life.When you return to the home page after the battle, an airborne package appears, and players will randomly receive some rewards by clicking on the ad.The design of the home page advertising entrance is in the same way as the overall picture of the game, and does not break the original atmosphere of the game. 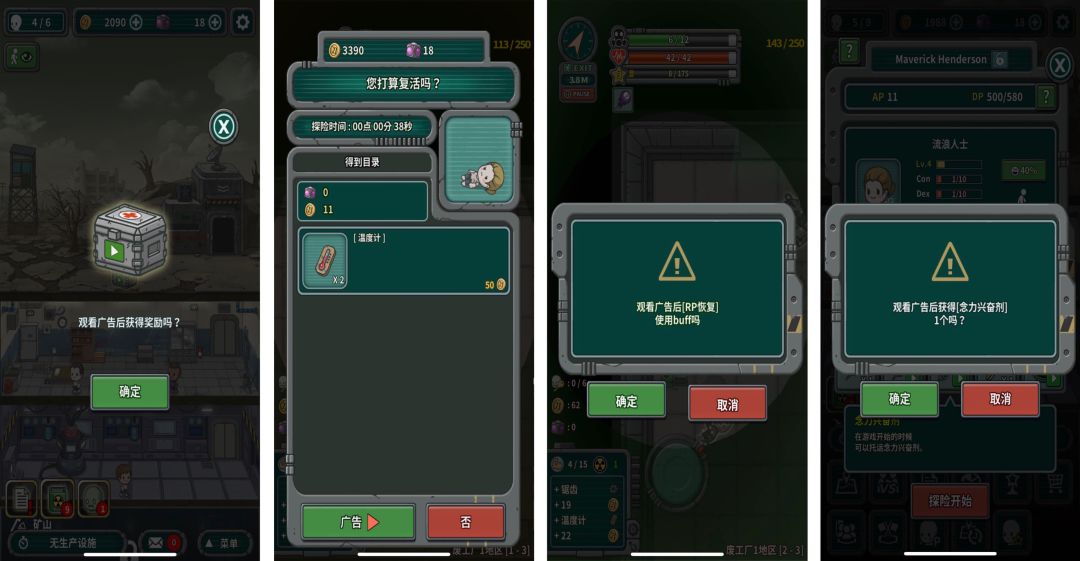 Developers:Blue flying entertains each other

While the combination of Rogelike and TPS is not uncommon, Bit Squad has created "infinite possibilities" for players to play in a number of games.A variety of characters at your choice, the game bursts out random attributes of the weapon.In one copy, the player needs to switch weapons based on different monster properties that appear randomly.Players from time to time become close-up combat fighters, and from time to time become high-speed shooting long-range shooters;From time to time, from time to time hard.The combination of different monsters will also produce new attack damage, nonlinear random play to add a lot of freshness to the game.In the game, the player will also encounter the production team full of "malicious", such as the killing of Boss explosion items may be blood-stained Debuff, people angry at the same time can not help but hold their stomachs.

In the advertising implant, "Bit Squad" performance is also widely praised by players.In addition to setting up an incentive video portal at common resurrection points, double rewards, and replica in-copy replenishment packs, players can also try out each character in the game by watching ads.This mechanism greatly satisfies Rougelike gamers who are passionate about freshness, so the willingness of players to actively watch ads is very high.Many players can also be seen expressing "conscience" about the developer's behavior in the game's comments.

Implanting ads doesn't mean being cut off from game content, and commercialization is what every developer needs to take into account at the beginning of gamemaking.As you can see from the above 6 games, as long as the player's needs from the combination of advertising and core play, the player's response is very positive.The commercialization of the game model of "IAP (In-Game Purchase) and IAA (Advertising Realization)" is increasingly accepted by developers and players.As it turns out,Reasonable advertising strategy in increasing developer revenue at the same time, not only will not interrupt the game experience, cause antipathy, but can increase the playability of the game, improve retention.From a player's perspective, it's the guidelines for recommended games in the App Store and Google Play, which encourage developers to always put the user's gaming experience first as they develop and operate the game.

I'm looking for a game gyro: 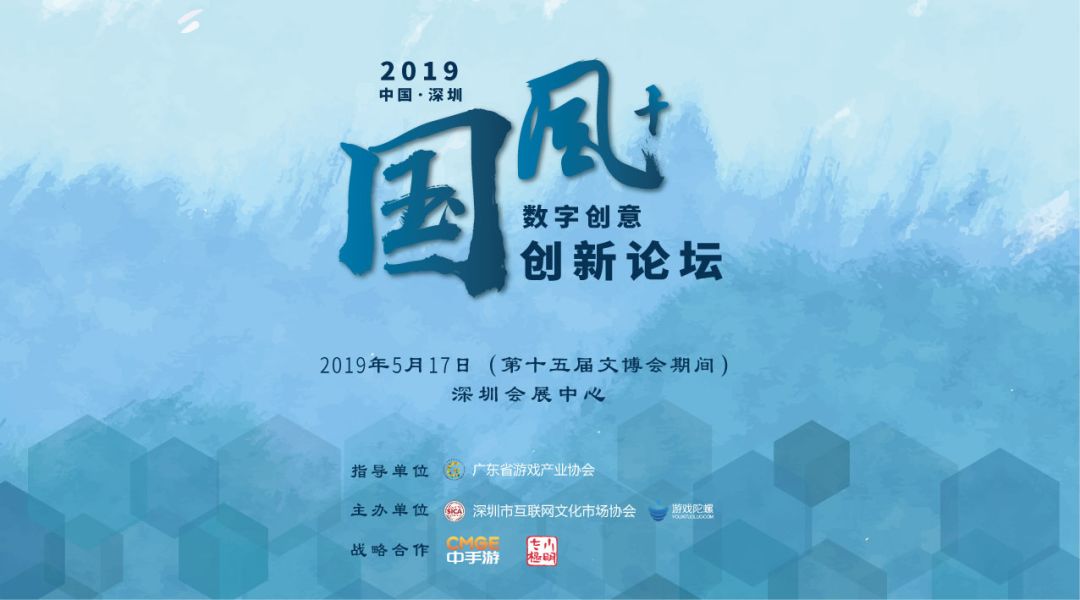 How do games recommended by Apple and Google make ads cash out?
Up to 200 words, currently totalWord.