How did Google's advertising platform become the world's number one technology company by market capitalisation?

I wrote two articles years ago《Why is Facebook a tough advertising company with the fourth-largest market capitalisation in the world?》"Why Apple's advertising platform iAd failed" (see WeChat subscription number "Connected House"), a friend left a message, next time to say Google, after all, Google is the founder of the Internet advertising platform, invented search advertising and the creation of Android ecology, today, although slightly low-key, but in the past few days braved the market value of technology first (in early February, the market value of more than $519 billion, the price-earnings ratio of about 35 times). 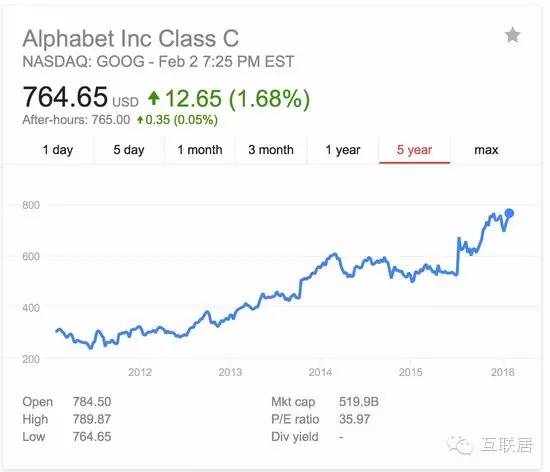 When it comes to Google, or more accurately, the former Big Google has changed its name to Alphabet (still the main body of public companies), in which Internet-related businesses have all been sped up into a wholly owned subsidiary called Google, also known as The New Google. In addition to its Internet business (new Google), Alphabet also includes a number of innovative businesses, including.

Including driverless technology, Google Glass (which has been suspended), and hot air balloon wi-fi, they'll be working on some BreakThrough projects. Driverless technology is said to be making technological breakthroughs and there is hope for an independent company to operate.

Through data, engineering, chemistry, medical technology to solve human diseases, to find the life tag of human diseases, such as cancer, mental illness, depression, including disease prevention and detection technology.

The medical technology company's goal is to find long-term drugs that promote anti-aging and disease prevention through genetic and data technologies. Through the information technology melting pot of DNA, it is used to make long-term medicine for future generations. Compared to Verily, Calico is a long-term bet with far-reaching implications.

Google acquired the smart home maker in 2014 for $3.2 billion and currently has only three products:Smart thermostats, smart fire alarms, and smart cameras (the cameras are another DropCam product), all three of which are highly rated on Amazon, camera 3.9, thermostat 4.5, smoke alarm 4.6, take a closer look at the product reviews and a lot of things that don't go well. NEST product revenue growth has also been slow, with quarterly revenue estimated at about $400 million. Apple's HomeKit platform, a smart home solution, offers a broader smart home platform and is popular with rice flour.

Google Fiber, which provides high-speed broadband Internet access at 1G speeds of about $70 a month, has covered only four cities over the past five years and has few users, but Google has been investing heavily in the project.Nearly $1 billion a year is said to be committed to Google's most money-burning division, with little revenue, just for the accumulation of technology and the construction of market threshold, in the real improvement of the user's online experience at the same time, but also waiting for the maturity of the harvest market.

It's an interesting technology incubator that drives human rights and freedoms through information technology, and it always feels like technology and democracy are two less snug things. It's because it's not on the sidelines that an incubator needs to try and innovate, and several of their products are related to information security and freedom of expression, such as anti-radicalization, counter-terrorism, including firewalls, tracking illicit arms deals, and so on. 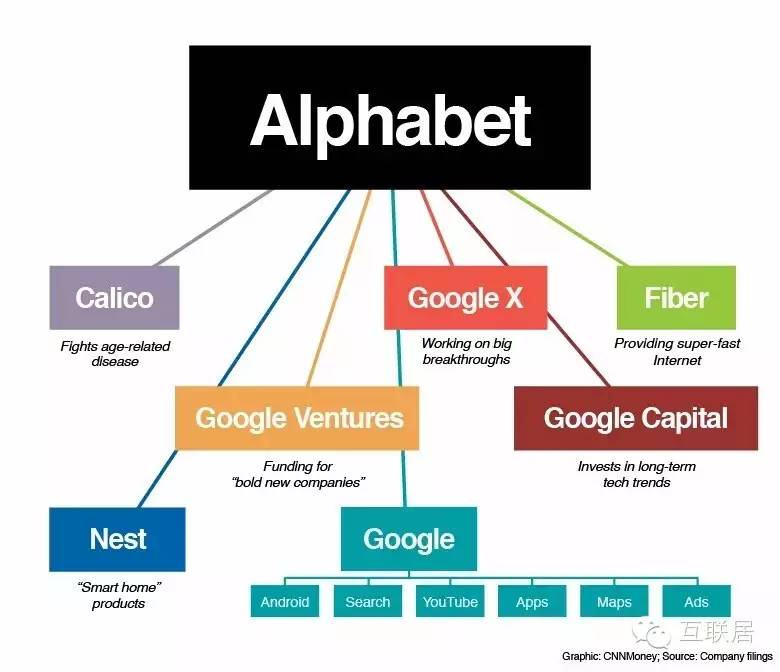 As you can see, the so-called Alphabet in addition to the Internet business (Google) is profitable, all other businesses are basically money-losing business, the most recent season of financial results, advertising revenue accounted for 90% of the company's revenue. What kind of advertising platform supports this Big Mac? Let's talk about Google's advertising platform. First of allLet's take a look at the pyramids of Google's platform! 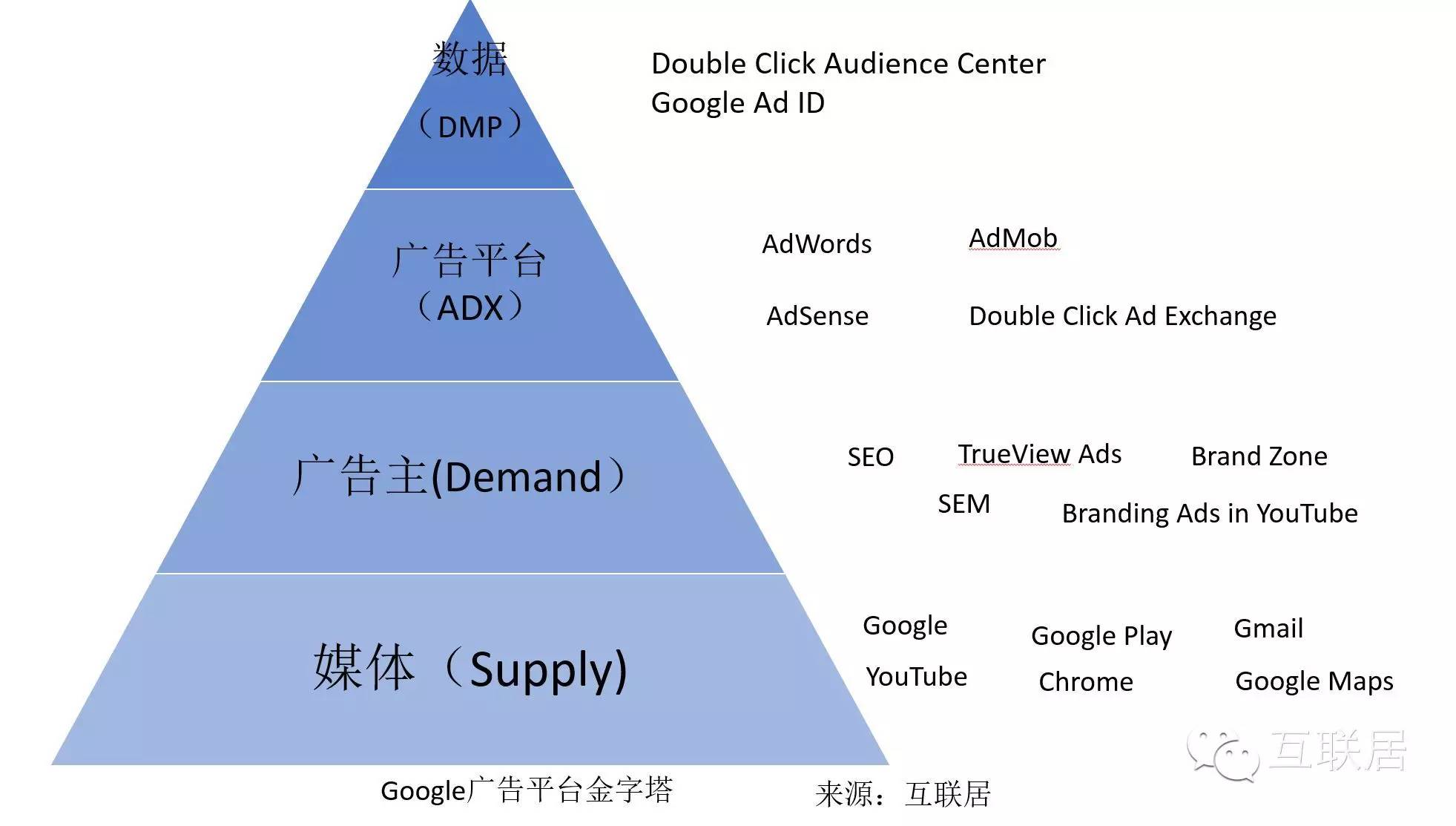 Compared to Facebook, Google's advertising pyramid is not so plump, but there are several Big Mac advantages and a sense of defeat alone.

Google's search engine is its biggest media, and its commercial value is being tapped to the fullest. In the mobile age,Google has taken advantage of Android's market and technology to capture 90 percent of the U.S. mobile search market.In addition, in the process of mobile Internet transformation, seized the bottom layer of Android system, including the app store, browser, search engine portal and other core media, although the progress of commercialization is conservative, but the potential is huge. In addition, AdMob is the largest mobile advertising platform, occupying the largest number of long-tailed application media. At the media level, Google continues to consolidate its strong media, search, youtube, for third-party external media, can form a scale effect, although low profit margins, but can snipe at the development of other platforms.

Google has been a benchmark in advertiser services, ahead of the industry. For search advertising services, it provides games such as SEO and SEM to help advertisers better participate in ROI promotion and see results.Almost all effect advertisers are Google's customers, especially the long tail effect is obvious. In terms of billing, Google is responsible for absorbing clicks and advertisers are responsible for conversion. On the video side, TrueView is available for billing, allowing brand advertisers to actually find their potential users and directly increase conversion rates, but the game seems easy to overdruse and talk about later.

4. Data:
In the PC era, Google's data advantage comes from the accurate targeting and searching of cookies for individual users, and its AdSense helps Google understand the world's newest website information, which is very important for Google's information discovery and indexing. In the mobile age, Google has used Android to strengthen its account system, and android users must log in using their Google account or they won't be able to use Google Play. Google's account system has developed with Android, as android accounts for nearly 80% of the world's market. Google is still relatively low-key in its use of data, providing only some of the necessary targeting information from advertisers.

Google has gorgeously turned to the mobile market in search advertising, and while mobile search's CPC is only 36% of PCs, it announced that mobile searches in the U.S. and Japan exceeded PC searches in May 2015. While Google's mobile search revenue is still lower than PC search revenue, beyond is sooner or later, and it's likely to happen in 2016. According to ComScore, PC searches are already at the end of a strong trend, and the trend is clear, with little growth in the past few months.

Google has grown so much that it announced a few days ago that it would cancel the Right Sidebar ad in PC search results. Anyway, the vast majority (96%) of revenue comes from Mainline ads at the top of search results. What's wrong with less ads on the right? 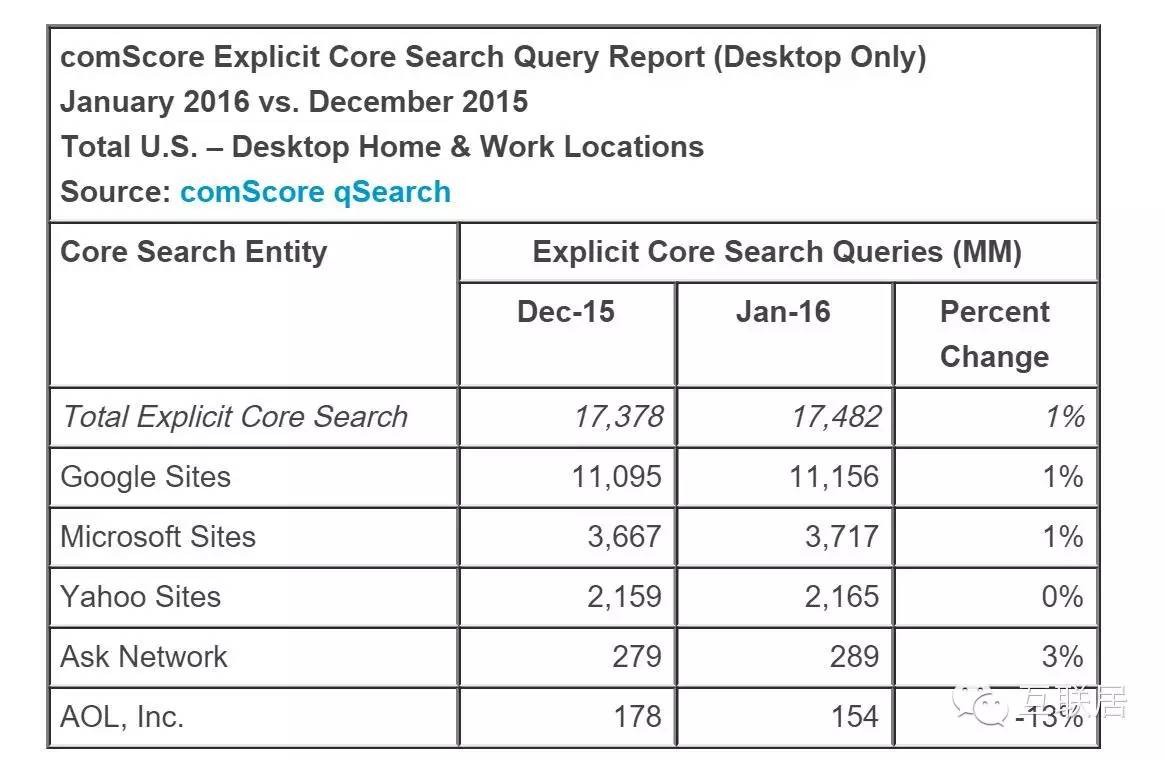 After watching the PC, and then look at mobile data, Google's data is a stand-out, occupying 94% of mobile search ad clicks, this number is followed by three reasons, 1. With Android monopoly, all Android must be built-in Google search (think of the operating system browser war) 2. Mobile search user experience is the best 3. effect advertisers have abundant resources.

In terms of the number of ad clicks, Google Mobile search ad clicks have a clear advantage, more than 94% of the market share. A small amount is divided between Bing and Genemi. 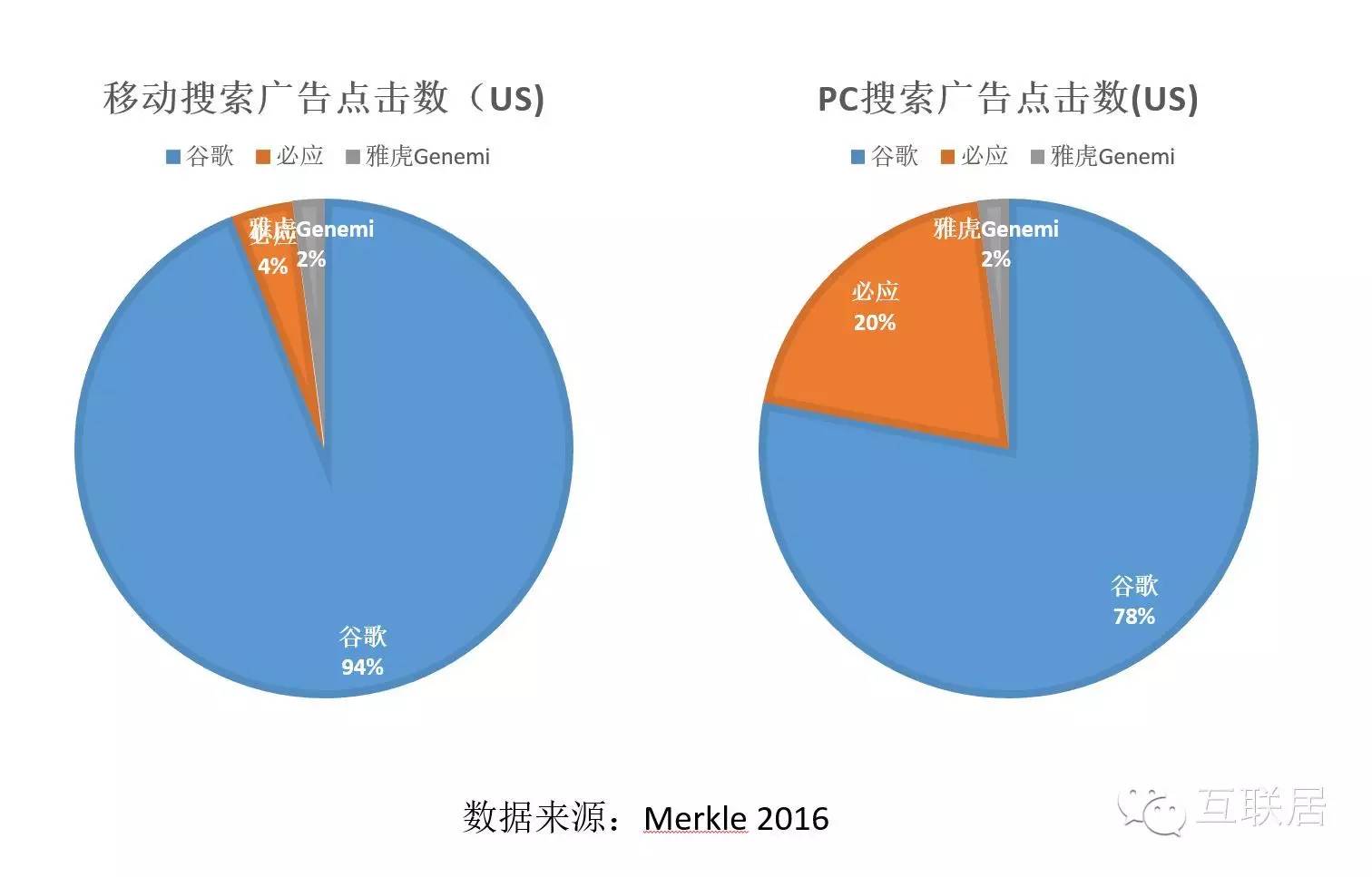 If you look closely at Google's earnings, you'll find that Google is very good at packaging advertising data.Regarding advertising, it only talks about revenue growth, click growth, CPC reduction。 On the face of it, this is the core indicator of advertising, butThese beautiful numbers often mask the core data of Google's advertising business, such as the growth of YouTube ads, which will greatly increase clicks, and the expansion of third-party advertising networks will greatly reduce the price of CPC, which can easily mask the indicators of Google's core search business.Here's how Google's search business is developing through a third-party data company, Merline. 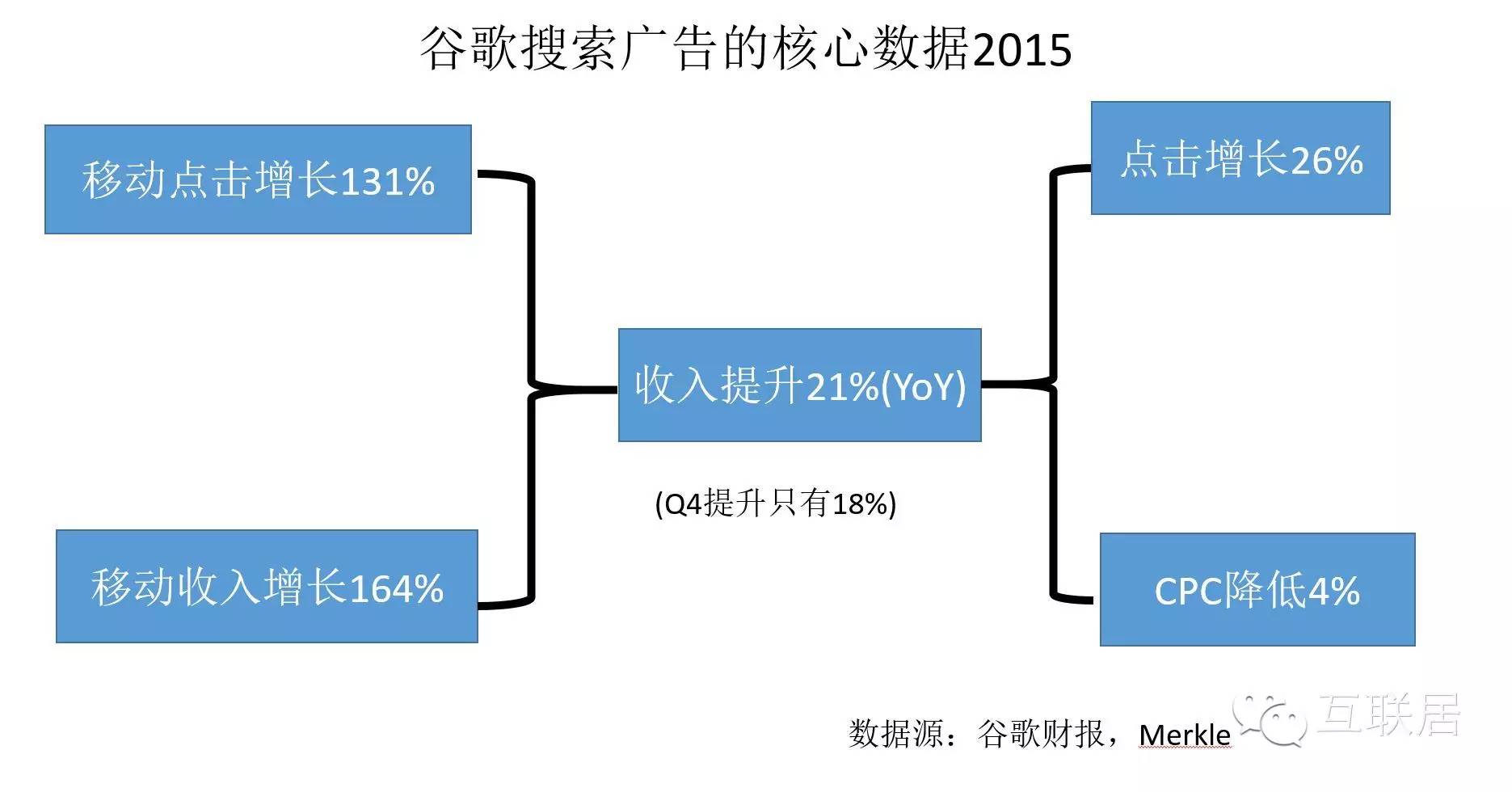 The growth in the mobile search market is due to the natural shift in PC search volume and the increase in mobile devices. In fact, relative to the PC, unit usage time, the number of searches per capita is much smaller than the PC.Mobile search faces new changes.People's access to mobile information, not search-led, is being transformed into other scenarios, such as smart assistants, scenario-based precision recommendations, and in-app information services. Once the information is split into the various island APPS, the search scenario is not easy to force, everyone is more willing to revel in the various super APP.

Finally chat about video advertising, while exploring new opportunities for mobile search, the main battleground for mobile advertising has now shifted to video. After years of YouTube's monopoly and the establishment of TrueView's high threshold for advertisers, Facebook has emerged as a social market power and cheaper, attracting a large number of video advertisers and promoting it at a good and low cost. With YouTube on video ads, make a positive PK. YouTube currently has advantages in terms of long videos, big brands, and so on, but that advantage is gradually eroded by Facebook's social media.

What is TrueView video advertising? Simply simply, the video must be watched for 5 seconds, after which the user can select Skip, which starts after 30 seconds.

Here's an example of a video advertiser experimenting on two platforms. Through this small experiment, it was concluded that Facebook's Cost Per View was much lower and that Facebook's ad ginseng and interaction were better than YouTube's. 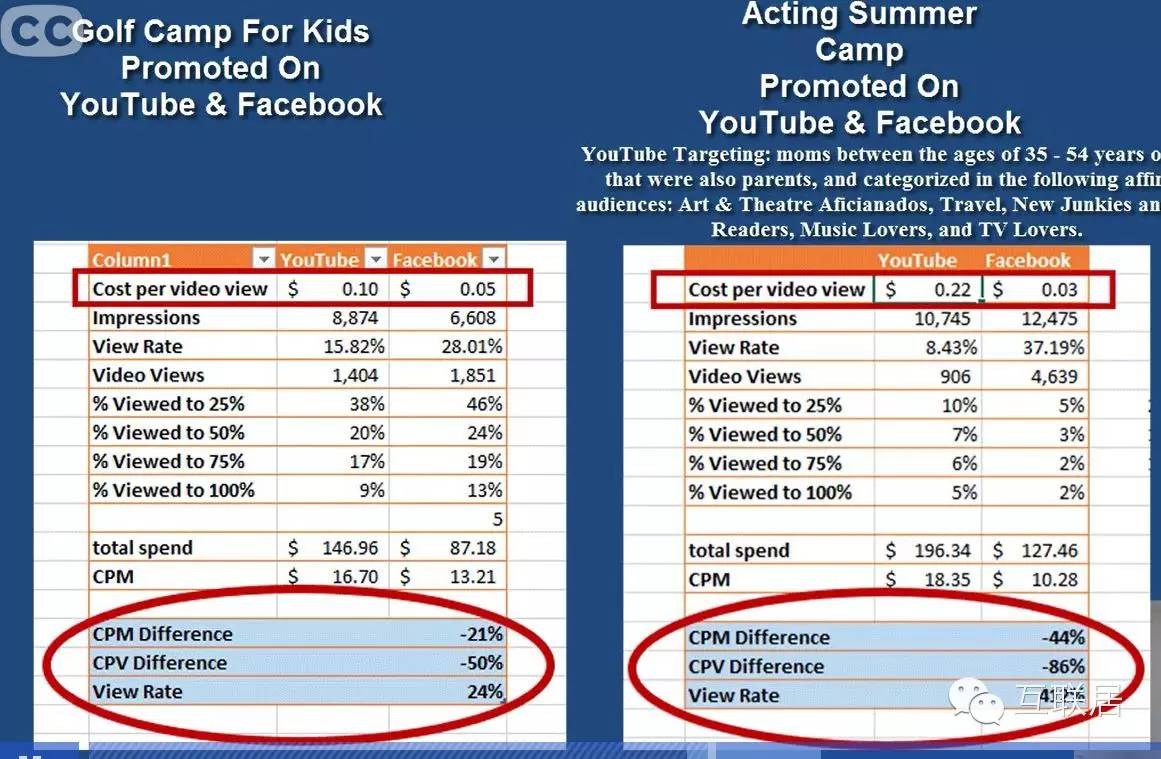 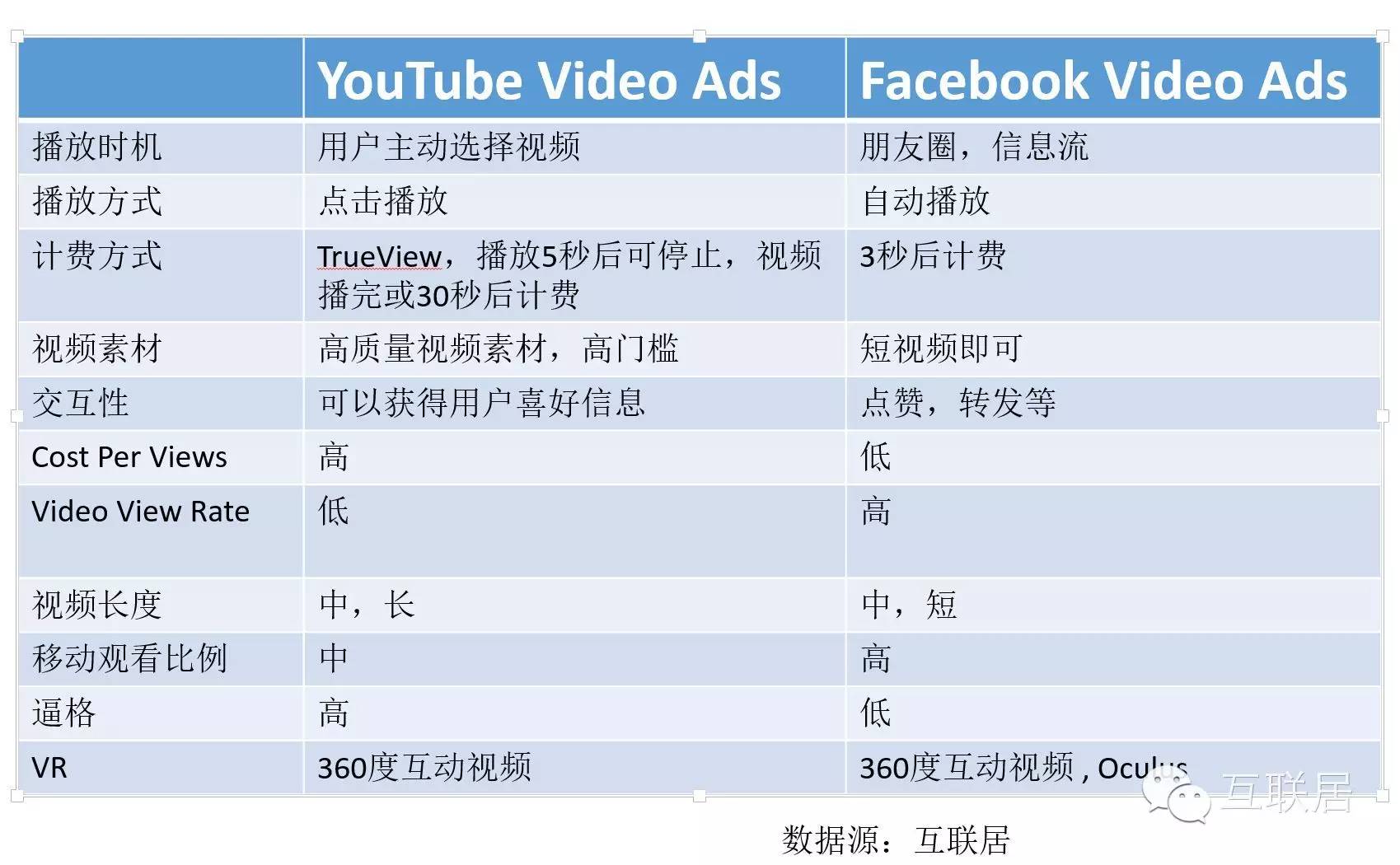 5
The future of Google advertising

We've always liked Google's vision of "To organize the world's information and make it universal accessible and useful", and we can see that Google is also solving important problems for people on a large scale, outside of the advertising platform.

How did Google's advertising platform become the world's number one technology company by market capitalisation?
Up to 200 words, currently totalWord.