Included in the topic
#这里有你想看的
53

Thanks to the huge user market and the low viewing threshold, Gourmet Isop became the fastest contestant in the short video session.

Last year's successful sea-going and occupation of Youtube China's top three "Office Ono", "Li Zixuan" and "Yuxi Brother" are from the food industry, according to the overseas KOL network red marketing platform NoxInfluencer analysis, "Office Ono" light Youtube The advertising network earned $4.59 million a month and is expected to pay $55.08 million a year in dividendsAnd the cost of a single video collaboration with Li Zixuan is as high as 800,000, oneThe annual advertising dividend is expected to reach 44.52 million yuan.

Meanwhile, in 2018-2019, gourmet food will be the fastest TOP4 KOL content type for shaking and fast-growing powder, according to the Cass Data Report.In the fast-handed content of the food field powder increase as high as 11.60%, ranked second. 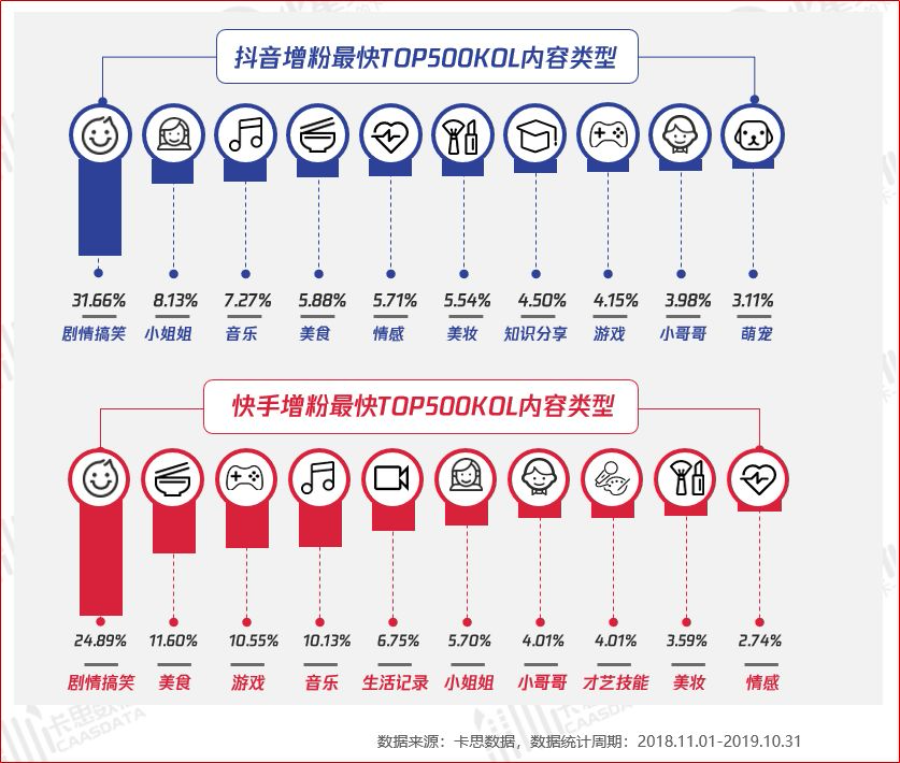 Gourmet droppers seem to be quietly becoming the dominant area for creators to enter short videos.

01
What can I do with a short video of a food category?

According to jam sister's incomplete statistics, shake sound, B station food district top 10 creators,Seventy percent of Chengdu is popular for homemade food, and once the "big stomach king" every place of the fast hands accounted for half. 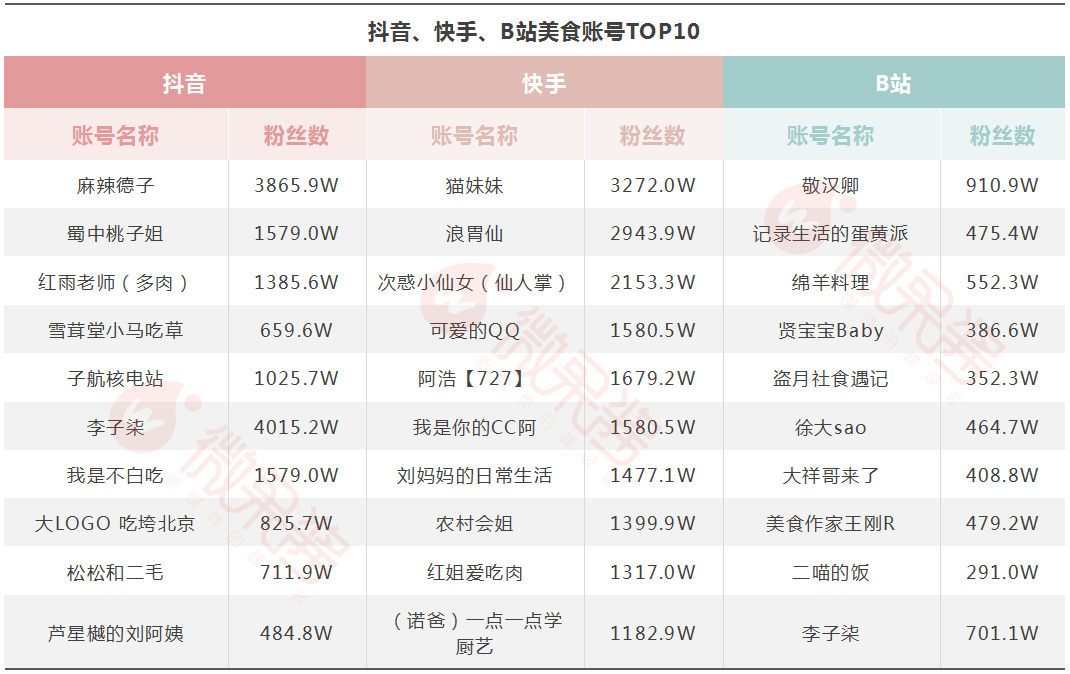 Food production is the first and most extensive direction for the public to be exposed to short videos of gourmet cuisine, from the earliest food tutorials to the present, with a number of different styles of new content derived from this core.

"Food and Life", China's first network of red "plums" and "solar eclipse" are using food to record the representative KOL of life, beautiful scenes and style full of clips, to give users an immersive experience,The distinctive theme of the scene is the biggest feature of this kind of food video.Also of the same type are the shaky blogger "Infested Old Time", the 80s and 90s set and tableware "God Restore" for it to save powder 741.7W.

But at the same time, every frame of high-quality picture is burning money, this kind of food video is suitable for well-funded professional short video team to operate, small teams or single-man creators are not easy to imitate. 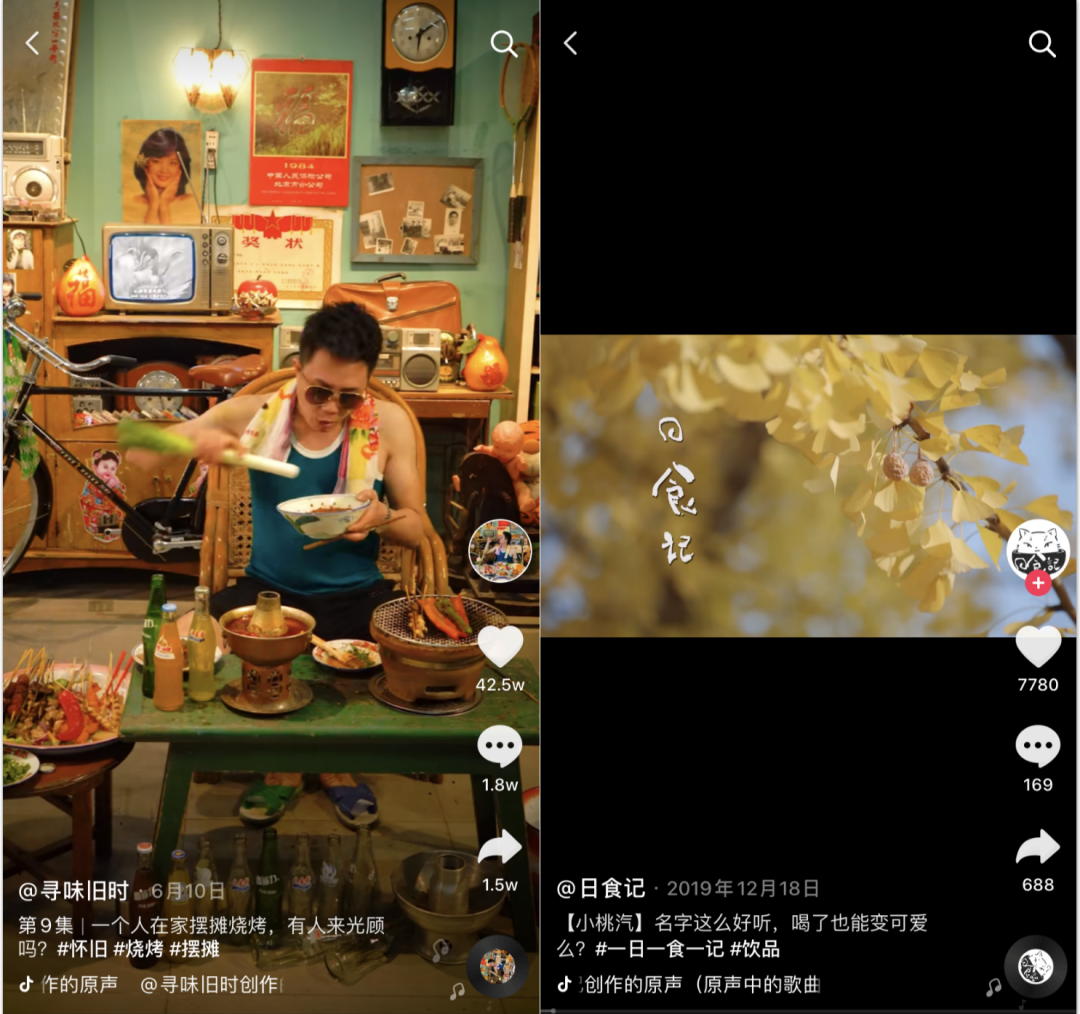 "Food and Family"Compared to the former, this kind of food video is more reference, the food part is mainly for common ingredients prepared "home food". The plot to bloggers as the main character, gradually unlock the role of different family members, the overall atmosphere for "harmony" "funny" "mutual loss" and so on.

Jiyin blogger "spicy virtue", fast-hand host "rural sister" in the video cooking is simple but let people index finger move home-cooked dishes, the way the family get along easily let the user share.Such videos are popular in the fast-sinking shakers and the quick hands of the grounding gas.

"Food and Drama", in the race for seconds in a single column of information flow, want to catch the user's eye in seconds, food tutorial alone is difficult to win, so inThe beginning through the introduction of fun drama has become a lot of food bloggers favor the play,Such as fast-hand host "cute QQ" each time to introduce the video theme before the small plot with boyfriend access, users more sense of generation.

B station 475.5W fan up master "record life egg yolk pie" and 552.6W fan up master "sheep food", the video works mostly focus on food evaluation and food challenges:Make or try to eat the hot ingredients and recipes of the day, challenge the strange way to eat, challenge a one-time mass eating of a certain food, with a gimmick-full title to attract strong user attention. 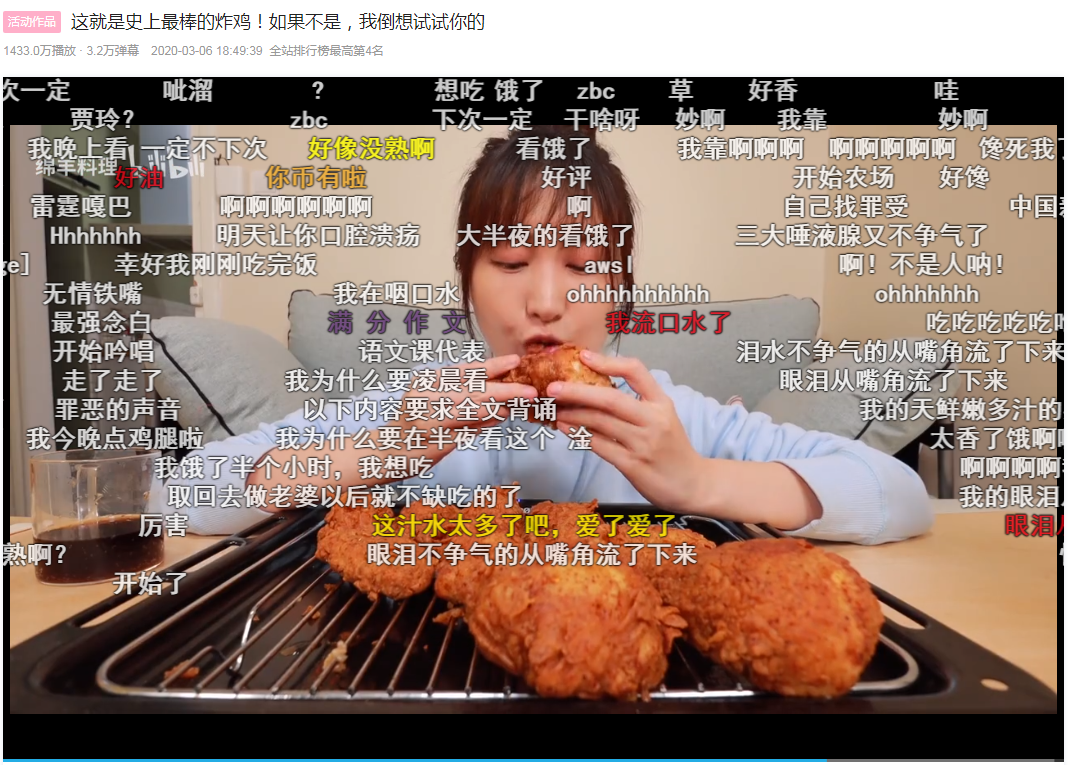 "The Work of God", the first video to be broadcast in the tens of millions

Street food introduction is essentially a national, even global, version of the video, and is the most commonly used model for local food self-media.

B station up master "stealing moon society food encounter" in the street to hit the authentic food shop at the same time, dig the story behind the shop, full of human pyroteotes so that the video has temperature, "the heart has light, everywhere is beautiful" is the "stealing moon society" slogan, but also their account label. 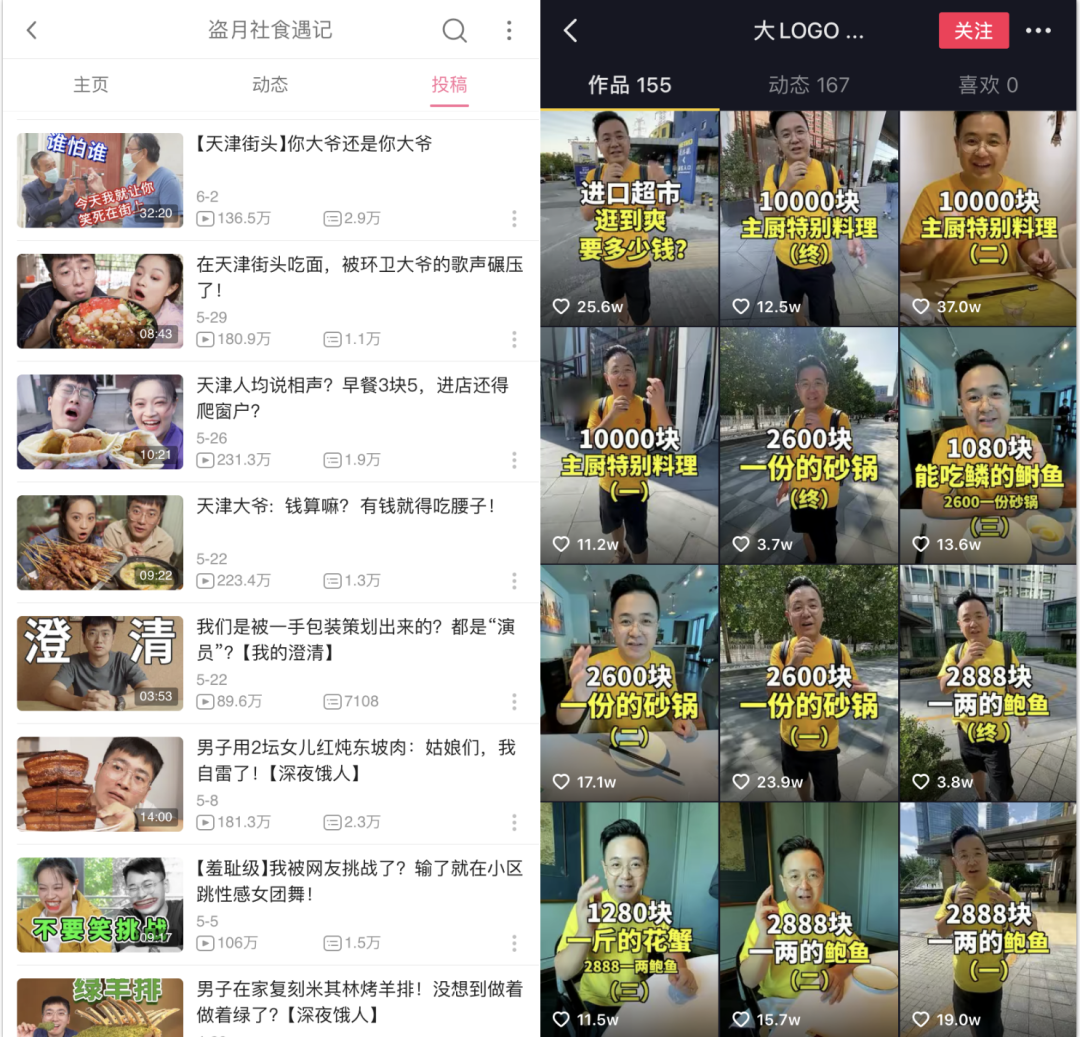 Coincidentally, jitter blogger "Big LOGO eats down Beijing" is taking the "luxury" route, using the user's hunting psychology, with everyone to experience "4500 pieces of state banquet dishes" "2600 pieces of casserole" "10,000 pieces of special dishes" and other common people difficult to taste the dishes.

One grass, one eye addiction, are now attracting users to watch food shop videos of the two major factors.

02
How profitable is a food video?

Food short video production process is constantly "burning money", as to how to return to profitable, aside from platform division and user appreciation, we summarized several ways to cash out:

As we all know, advertising is a classic operation of content realization, and food video because of the high verticality, easy to attract food-related brands "feed", especially food production video,In the process of cooking, the use of ingredients, seasonings, tableware, cooking equipment, small appliances and other common is a naked advertising rent. 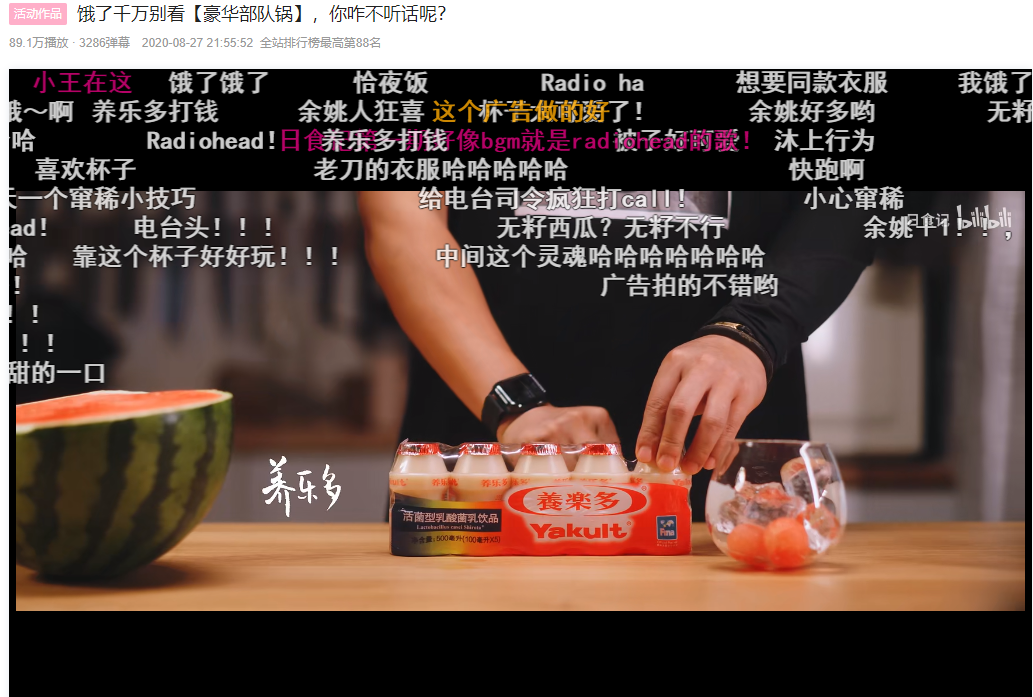 The old knife of the eclipse used brand-side products when cooking, and the effect of grass-planting was obvious

The shop is an early food self-media preferred way of creating, especially local food self-media, has become their main revenue. Visiting shops and chia meals are essentially the same, the difference is that offline physical merchants pay advertising fees, so that food bloggers to taste the experience in person, usually in the form of card-testing users of Amly grass. 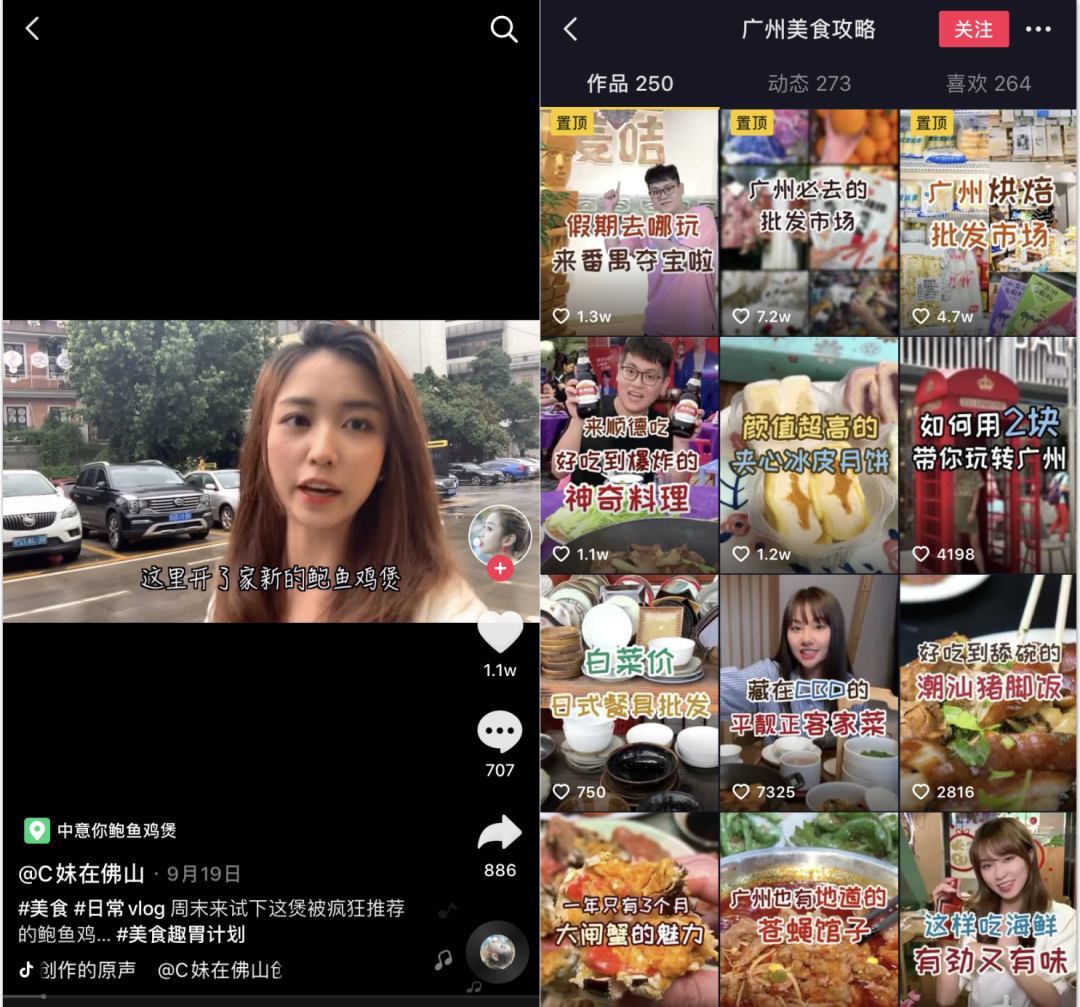 A short video blogger for local food in Guangdong

In Jiyin opened the merchandise window, shopping cart hanging video of the same product when the "tao", is the first step taken by most food bloggers e-commerce, followed by the opening of Jiyin small shop, on the shelves of their own goods, the opening of live sales and so on.

The same is true of fast hands is a similar mode of operation, but because of its explicit gene for live service, creators often jump out of the positioning itself to start selling goods, such as cosmetics, necklaces, pen cores and other products that are not related to food will be on the shelves to the express shop. Compared with the promotion window brought by the small break station, opening Taobao store is the choice of most B-station food owners, and their supply generally comes from third-party processing plants.

Food accounts in the accumulation of a certain popularity, trusted by users, usually open the selling mode, and there are many places in the middle can be added. 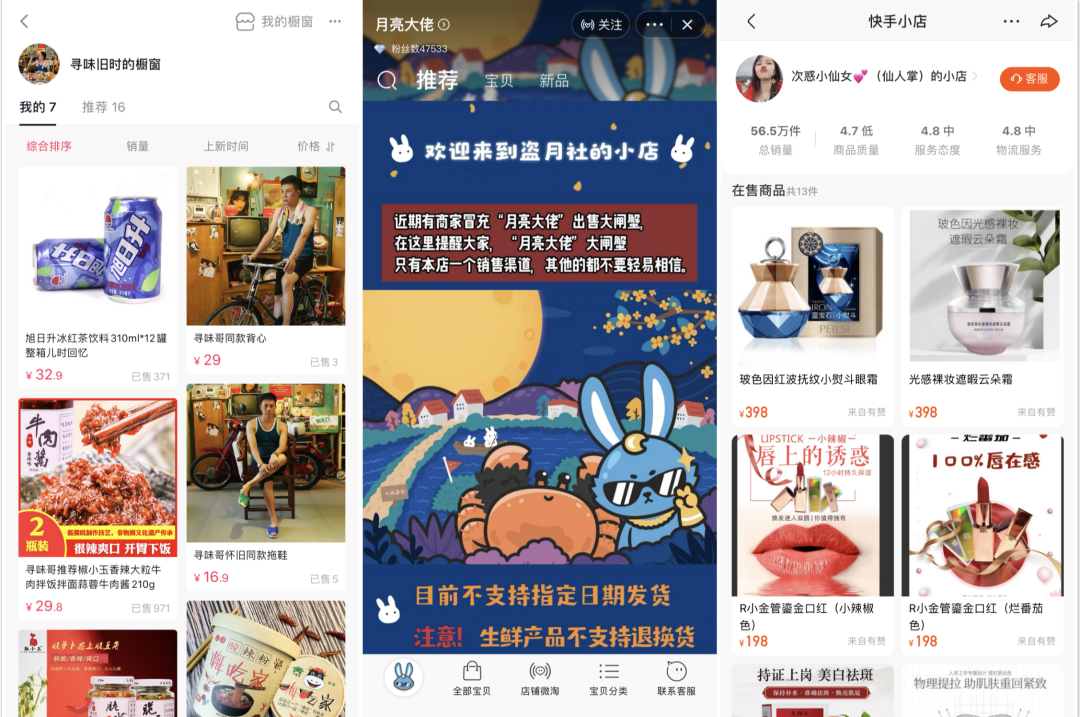 The picture on the left is a shopping cart that shakes the tone when it's old, a Taobao store that steals the moon's social food, and the right image shows a fast-hand shop with a "sub-bewildered fairy"

In the gourmet class,Mr. Li, who never receives commercials, was almost one of the first e-commerce ers to make short videos of food.

In 2018, the opening of the flagship Tmall store of the same name, the current number of fans has reached 524W, of which "LiZi Screw Powder" a total of 667,000 people pay, the unit price of 39.7 yuan, the turnover alone reached 2600W plus, suddenly become a brand food IP.

In November 2019, li Zixuan brand's physical "flash shop" opened in Beijing's front door street, this is another upgrade of its personal brand,The new retail model of "offline experience, online consumption" follows the e-commerce logic with its own red attributes.

Also walking from line to line is The Eclipse, which opened in Shanghai in November 2018As a "solar eclipse" content to reach the user's bridge, focusing on the emphasis on life scenes, take the content retail route.

In July this year, Mr. Li's MCN set up a food company. Obviously, the next stop for Li Zixuan is the food business empire.

However, these are a certain amount of food size only have the residual power to do things, the general food content creation cash mainly stay in the first three.

03
After the ban on eating broadcasts, the big stomach king went bankrupt?

The "big stomach ban" that rocked half the food world in August now seems to have passed. Many well-known big stomach king food bloggers removed the prefix, one after another returned.

Named by CCTV, "Snowy Hall ponies eat grass", after experiencing a full-scale video after the transformation of the comeback, or familiar opening remarks, but the ingredients in front of the camera greatly shrunk,At one point, it hit "bankruptcy, simply eat a potato" to attract the user's attention, also known as the hard core of the "Tibetan nine brother", in its latest video, users have left a message"It's all honest" "Finally can imitate."

And once a single month powder 372W "long stomach fairy" in the removal of the "big stomach king" title after the make-up, into a "flat and unsoic" shop blogger, relying on the original popularity to maintain video heat, but it is difficult to have another burst. 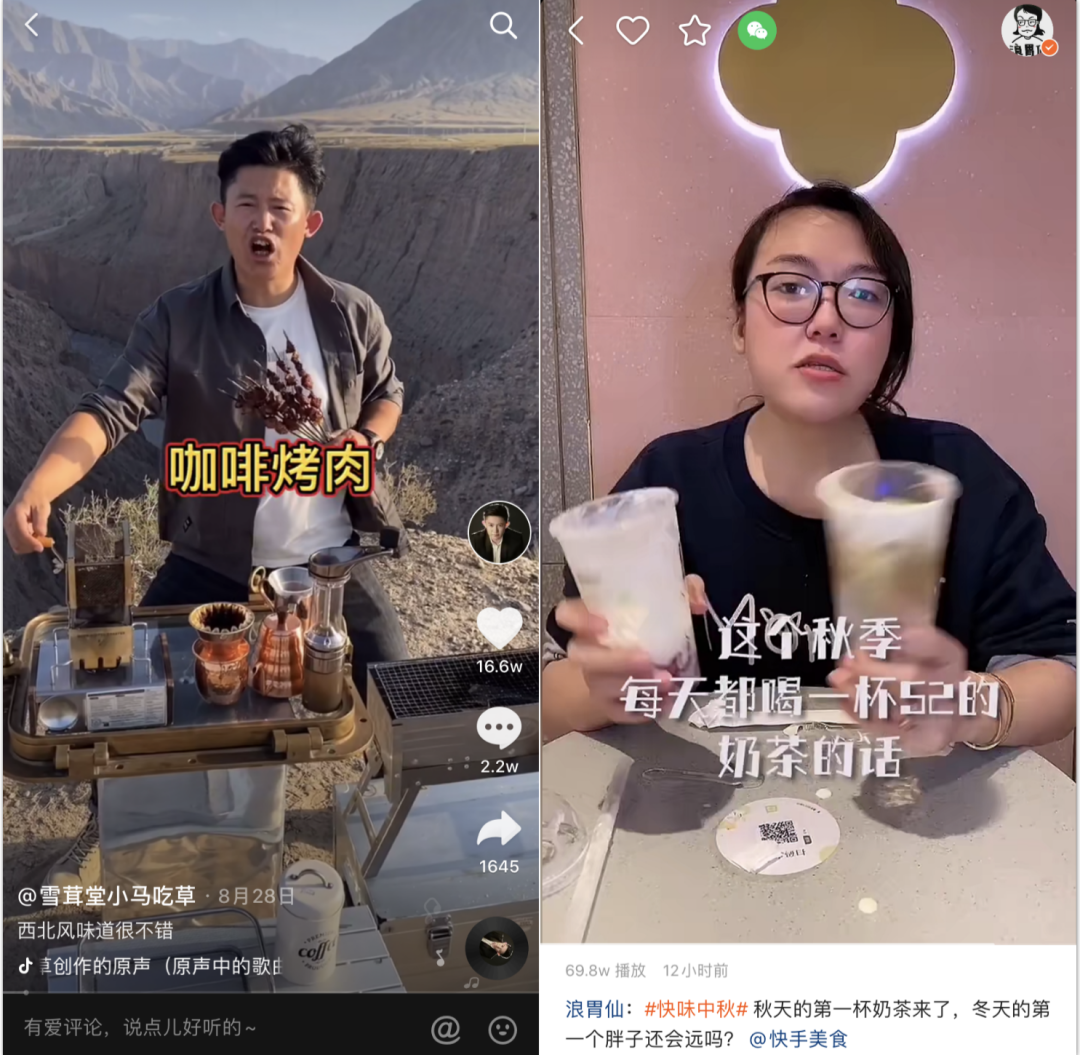 As it turns out, there's no "bankruptcy-style eating broadcast."Food short video blogger, the attention rate plummeted, although the lines and actions are the same, but no inner taste.

This explains creationAlthough the model is universal, but must have a clear account of personal labels and style, in the remarkable "big stomach king eat broadcast" offline,Whoever succeeds in building his own title first can run out again.

After an "earthquake", the food short video track also ushered in the dawn,On September 3rd, thanks to the growing food content, the food circle of Station B, which was originally part of the living area, began to become independent, leaping to the top of the division and re-launching, and the weight of food short videos in Station B increased dramatically.

On the whole, food short videos are still very funny.Who doesn't care about the jobs that you make money from eating?

How long can Ali keep Youku?
Come on! Why do Youku love Qiyi ads for 120 seconds and YouTube for 5 seconds?
OTT content on YouTube offers the most advertising opportunities
(Collection) mass, broken sister boutique software
Good interactive design is not the same, 10 ways to help you give your design personality