Traffic is increasingly fierce Giant transformation to seize the social advertising market - you, have been marketed!

Big "base" Dali, "hahahaha", sticker beard, ears move up, instantly burst into a circle of friends, 2018 opened the four major TV's Spring Festival Evening advertising title of the round of bombing, the first winner in the promotion of television channels in the Year of the Dog. And these TV Spring Festival Evening's title merchants were originally scheduled for the headline product volcanic small video and shaking sound, due to the "God bless the storm" and market rumors due to the expiration of its audio-visual license reasons, today's headlines to the above-mentioned advertising rights to the newly acquired Faceu, so that the product has saved enough visibility. This is also another cross-border cooperation in mobile marketing and the traditional television media quietly surrounded. 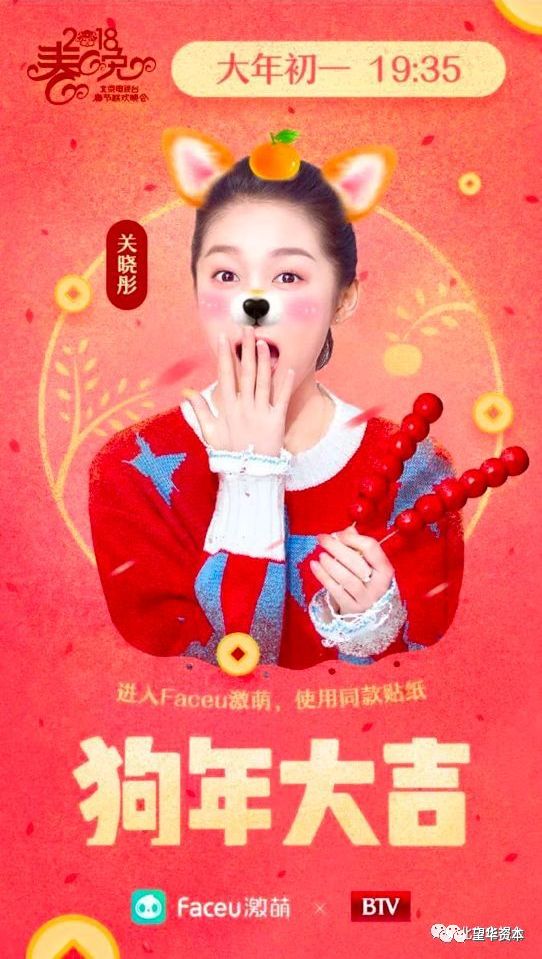 The development of China's marketing in the past 5 years fully shows the gradual migration of traditional media channels to the new media field, while digital marketing itself is constantly adjusting in the development, from the earliest high-traffic website headline advertising space, star demonstration effect to the current procedural purchase, targeted marketing of specific groups of people interest labels and stronger social attributes combined, all kinds of enterprises have also made clear their positioning.

At present, China has more than 600 million mobile Internet users, year-on-year growth rate is higher than the global level, especially among them under 30 years of age more than 50% of young users, they are more familiar with the Application environment and scenes of the Internet, but also more willing to try new play and new features, this kind of people for digital advertising acceptance even more than twice the rest of the age group. According to TechCrunch's calculations, the overall size of China's advertising market is expected to grow to $122 billion by 2020, doubling in three years; Based on such a large radiation population, China's digital mobile advertising market has been rapid development, but there is still a certain gap. 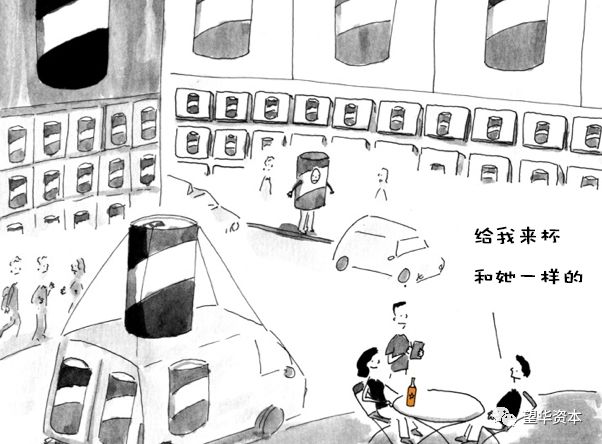 The rise of marketing benefits from the establishment of traditional media channels such as mass production and television industry, but with the development of the Internet, especially mobile Internet, the distance between people is further eliminated, and one-way TELEVISION advertising, which pursues innuendo and control, is constantly weakened and ignored. The main battleground of marketing then shifted to a variety of digital positions. In addition to websites, e-commerce, microblogging, WeChat, micro-commerce, DSP, DMP, mobile social, traditional offline channels digital, completely channel, online and offline combination, AR/MR, net red, live streaming and other new models are springing up. 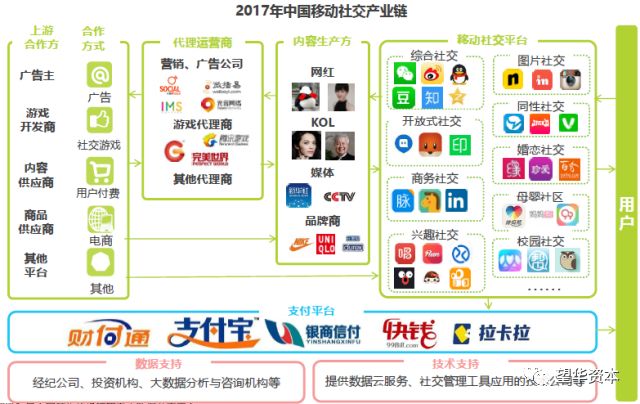 In the current market environment, the interaction between consumers and brands, and even between consumers is particularly important, the large-scale discussion and secondary dissemination caused by individual explosives often become the key to re-shaping brand image. Content and creativity are more important in digital marketing than technology, but technology can amplify the spread and effectiveness of content. How to mix business and technology strongly and balance short-term return on investment with long-term customer loyalty are real challenges for market people. But the ensuing problem of advertising fraud and changes in the way it is disseminated has led advertisers and investors to turn their attention to upstream technology companies and social advertising platforms, such as a series of events such as the $600 million who-owned acquisition of Stranger Things, which caused a stir after the Spring Festival. 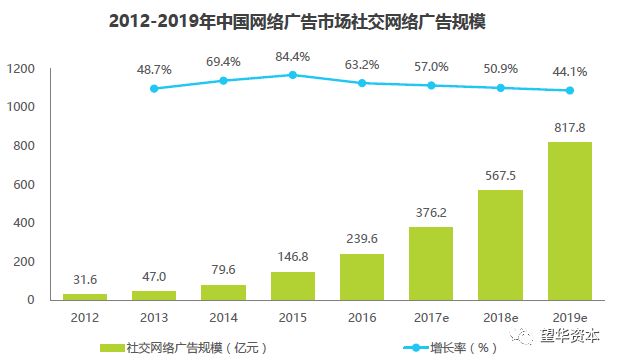 At present, the speed of upgrading of program advertising restricts the demand for crawling multi-category information, and users are more and more difficult to be impressed by the bomb-like information of comprehensive KOL. Mobile social media focuses on the emotional connections of users, demand experiences and the value of multi-dimensional data, which is estimated to exceed 80 billion yuan by 2019. 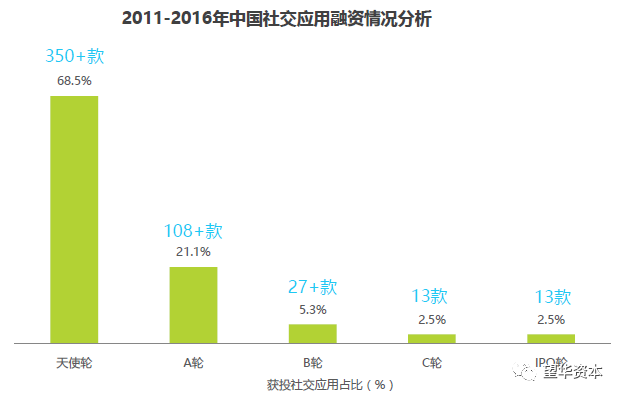 Correspondingly, in 2011-2016, China's social applications as a whole had a more active investment and financing market, with more than 500 companies getting financing, with Angel Wheel accounting for nearly 70% of the companies, while only 5% of social applications that went to Round C and ultimately had the ability to make IPOs. There are a number of Internet giants to lay out a large number of social sections, of which Alibaba has the largest investment, followed by Tencent, Weibo.

In the year 2018, two names have caused a new round of heated debate: exciting, exploring. Don't get excited, they're not directly related, but they're on fire in different ways. 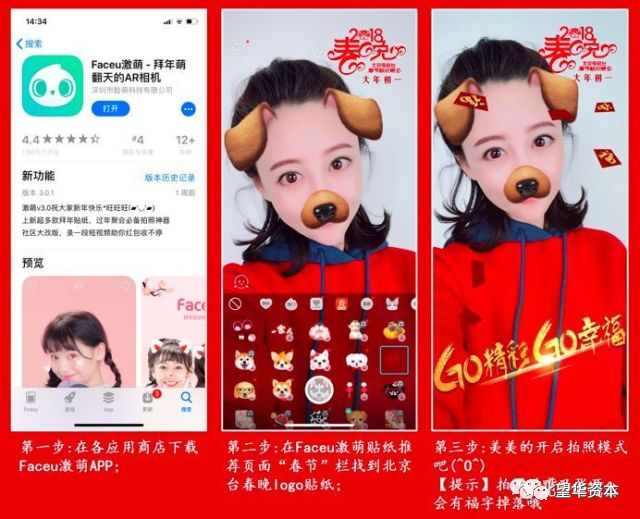 On New Year's Day, the Spring Festival Evening was named C-bit after the top of the battle and the volcanic video was banned, and the tv media exploded with dynamic stickers and emoticons. The winner behind it is today's headliner, which has already completed a $300 million takeover bid. As one of China's most traffic-dought information platforms, why does the headline seem to suddenly start trying to make an article on a photo-taking social channel? It was premeditated, the headlines because of self-knowledge traffic, but the user stickiness is not enough, so in 2016 the headlines began to launch a series of "headline questions and answers", "micro-headlines", the former is AGC to PGC a professional transformation, while the latter is to publish their own ideas including text pictures, such as the model similar to microblogging. The intention of the headlines is in line with the idea of using tools to encourage the generation of content, strangers to make friends to improve their usage habits, media content to improve user stickiness, and ultimately to create a vertical acquaintance social product, and this acquisition is an important part of the headline-building social function matrix. 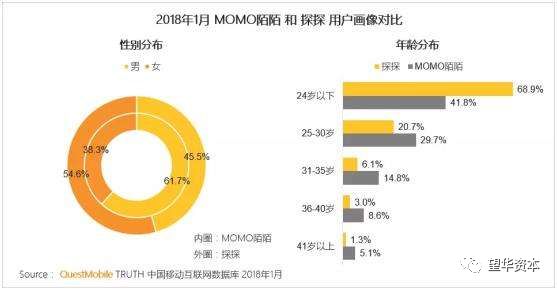 Just after the long holiday, Stranger announced that it intended to buy a 100 per cent stake in Prospect for about 5.3 million new Class A shares and $600.9 million in cash. The purchase price is estimated at more than $700m, based on the share price at the time of the announcement. In addition, the fact that strangers pay in large amounts of dollars in cash is ignored by the market, and cash payments suggest a strong sense of confidence in the management team. As the boss of the social branch, strangers started out in position, and then carried out advertising business and live streaming business through the accumulation of a large user base, in which LBS-based functional information push is an important part of the early commercialization of strangers, and constantly carry out technical upgrades to help advertisers through messaging functions, video social advertising push and audience in-depth interaction.

At the end of 2016, strangers video streaming ads online, in 2017, strangers in the video social marketing value of the mining further actively explore, try to their own platform network red people and high-quality content for further commercial realization, the introduction of a new red advertising platform "stranger star", for the brand owner to provide content production, content distribution, content interaction, content into one of the video marketing solutions. But because strangers pour a lot of resources to carry out live streaming business, the business to help strangers' rapid growth in revenue, but also led to a certain degree of loss of social users, most of whom turned to the game upgrade exploration, which also led to advertising business and live streaming business bottlenecks, revenue growth rate declined. Aware of the crisis, the decision to re-create the social business, re-create the social roots of strangers, and return to user access and services, not only strong union, but also help to dispel the market's doubts about its diversification.

From the perspective of market dynamics and changes in investor preferences in the field of digital marketing, it is an eternal demand to find efficient flow realization methods and discover the technological value of enterprises. After the outbreak and melee of 2016 and 2017, the market will be more rational, but also face multi-faceted integration and value chain reconstruction, the giant down, 2018, unicorn-class enterprises will be particularly fierce competition, how to carry out traffic grafting and technological upgrading through reasonable capital operation, is an important issue before the players.

Like the relatives of this article, welcome to forward Oh 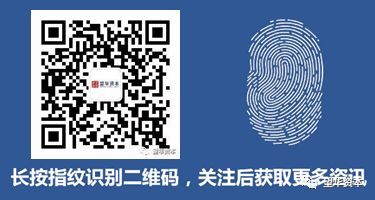 Traffic is increasingly fierce Giant transformation to seize the social advertising market - you, have been marketed!
Up to 200 words, currently totalWord.