Facebook last month reported its blind fourth-quarter 2015 results, with more than 1 billion daily users.Revenue was $5,841 million, while advertising accounted for $5,637 million, which was even scar more scaryIt accounts for 80% of revenue from the mobile advertising business. The author has also created a marketing page on Facebook, in fact, to get a certain limit of internal friends of the advertising (Campaign) promotion costs, when surprised to run efficient (too fast, less than an hour dozens of knives are gone), because they have also done advertising system, but also made a lot of comparisons, from the form of diversity, functional integrity, targeting users, real-time, data analysis reporting of the comprehensive indicators Facebook is the industry leader, Here's an analysis of their internal Pacing algorithms for advertising systems, as well as an introduction to advertising technology.

Pacing is an algorithm used in Facebook's advertising system to adjust the pace of spending budgets, an analogy for runners: a premature sprint means you're out of action before the finish line, but a late sprint may not have finished the race. Pacing promises to automatically allocate different ad budgets to all advertisers on a competitive premise. Pacing is the core component of optimization that enables advertisers to get the most return on investment (ROI).

Let's use an example to explain how Pacing works. Below will involve clicks, the same idea can be applied to browsing, conversion, behavior, arrival rate, etc.

For simpliciy, let's assume that the same-day prices for these opportunities (clicks, presentations, etc.) are known in advance. This allows us to clarify the click-through price and revenue relationship more clearly. These assumptions are modeled based on the opportunities generated by the goal.

Here are three examples to understand the maximum value the Pacing algorithm provides to advertisers:

Scenario 1: When there is no Pacing algorithm

Without Pacing, advertisers' budgets are consumed cleanly (potentially expensive clicks) for a short time from the start, with intense early competition and no competition in the later stages, resulting in a certain waste of resources. The blue dot below represents the opportunity for the ad to show, the yellow circle represents the ad wins the show, and the red line represents the bid price. The result is higher average costs, but advertisers get the most out of their ad-based settings. This is called accelerated delivery. 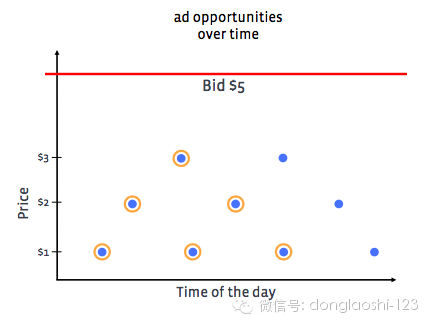 In this case, the lowest click-through price is pursued, but the advertiser's budget is not used up in the end, and the final ad performance is the worst. 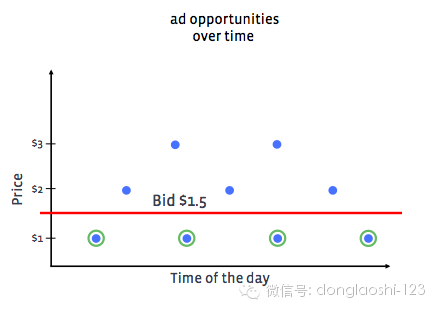 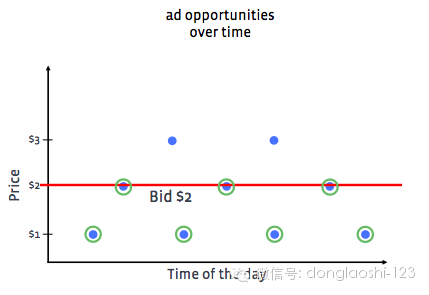 From the example above, when we use a stable bid (Pacing) throughout the period, the advertiser's value is maximized compared to no Pacing or the bid is too low. To achieve this goal, Pacing expects to learn from other competitive ads that have the same target users.Make an optimized bid. This is a simple formula.

Deciding to optimize the bidding is at the heart of Pacing's algorithm, including a feedback system that lets Pacing record it.

CTR is the click-through rate. We use the same philosophy to see view rate (VTR) and conversion rate (CVR). The accuracy of these values increases steadily and is influenced by a variety of factors, such as ad type, audience, point in time, ad context, and so on.

Pacing maximizes advertiser profits on a given budget. It makes advertisers more realistic, and Vickrey-Clarke-Groves (VCG's pricing by calculating the total amount of losses an advertiser's participation in an auction has caused to other advertisers) has no benefit in cheating value, nor does it have to think about how much the maximum bid should be set. This avoids special opportunities in the auction system.

Q: My ad was not optimized correctly by the pacing algorithm, what might be the reason?

Another reason is that the target audience is too narrow.

If this ad is overstressed, you may have a large audience but quickly consume your budget.

Q: How will Pacing be affected when I change my budget?

A: Pacing will calculate the new optimal bid, but this process will take some time, during which time the bid is not optimal, so it is not recommended to change the bid and budget settings frequently.

The Pacing algorithm behind Facebook's advertising system
Up to 200 words, currently totalWord.