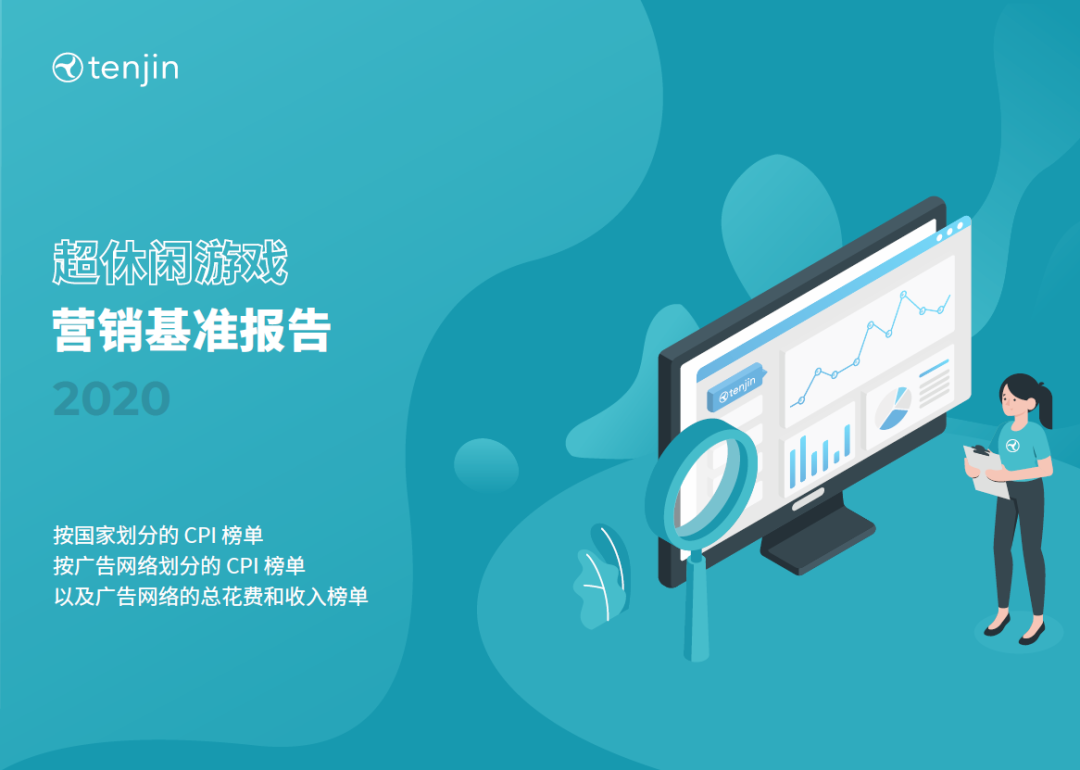 Ultra-casual games can not be regarded as a new concept, with the development of Internet advertising technology to fill its commercial logic defects, low development costs brought about by low trial and error and opportunity costs, making it in 2019 quickly become a hot spot in the gaming industry, in addition to the new entry into the work room, some medium and heavy gaming companies have also begun to try to make ultra-casual games.

"Simple but addictive gameplay presented in a minimalistic fashion": the gameplay is simple, addictive, the game style (design) is minimalist.

"Cashcow," quoting the Cambridge Dictionary's interpretation of the word "a." business, product, or service that makes a large profit, Often used to make money to support other business activities", combined with the reality of ultra-casual games, can be understood here as ultra-leisure games revenue performance is generally very good, and rely heavily on advertising traffic cash, but also to provide advertisers with a lot of traffic.

As can be seen from the above features, the advertising and advertising revenue data of ultra-casual games have high reference value for both gamers and advertisers. In the year 2020, Tenjin, the world's leading attribution monitoring platform, released the "Ultra Leisure Game Marketing Benchmark Report 2020", which combs through the CPI data of the 2019 Ultra Leisure Games by country and advertising network, and the report includes the dataTenjin collected anonymous data on all ultra-casual games from January 1 to December 31, 2019, CPI and ad networks (the report is aggregated by the top 10 ad networks for advertising spending), and the CPI report includes only countries and regions with advertising spending of more than $1 million.

By combing and interpreting the contents of the report, Morketing Global distills four key points of information on the cashing out and buying volume of ultra-casual games. 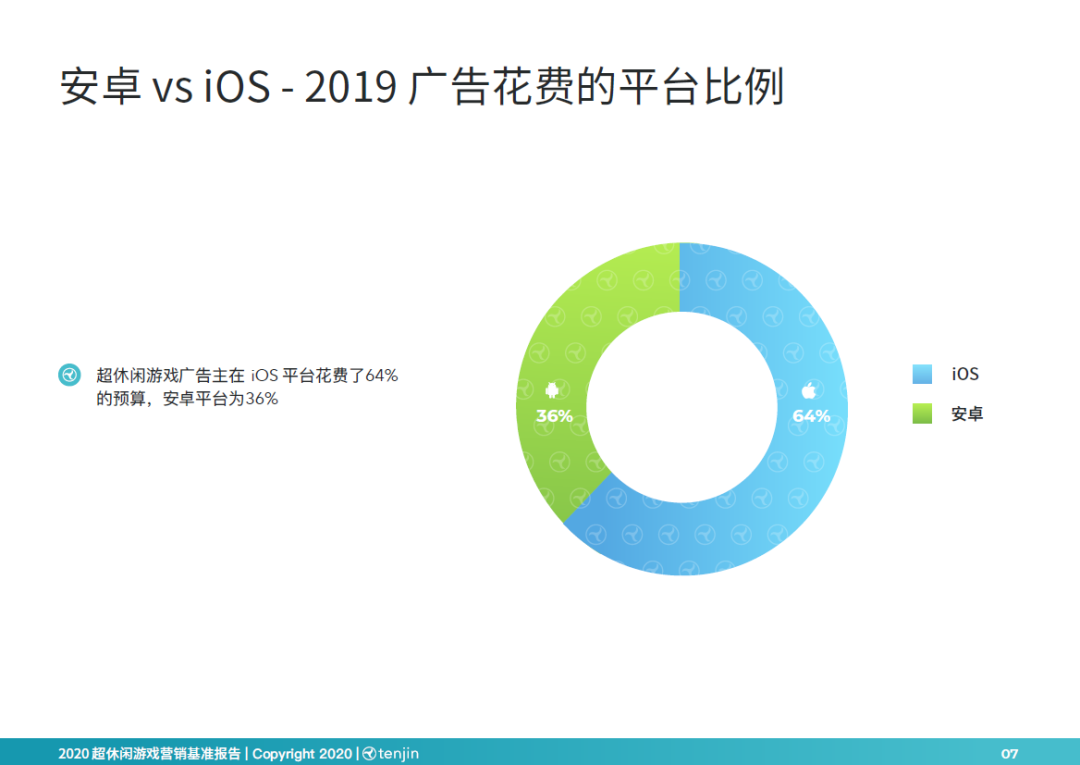 Mature markets such as Europe, the United States, Japan and South Korea have high investment and high returns, or because of the complexity of channels to prevent overseas games from entering China

In terms of country rankings, whether it's Android or iOS, the U.S. ranks 1st in the median CPI, and it's very different from the 15th-ranked country.Tenjin notes that the report only includes countries and regions with more than $1 million in advertising spending, so while the median CPI looks low, the amount of advertising spending in the top 15 countries and regions is small.

The top 10 countries in the median CPI for dual platforms are the United States, Japan and South Korea, as well as Western Europe and other more mature gaming markets.China did not appear in the Android platform rankings, ranking fourth in the iOS platform rankings;The complexity of the domestic Android ecosystem has made some foreign manufacturers more cautious when entering the Chinese market。 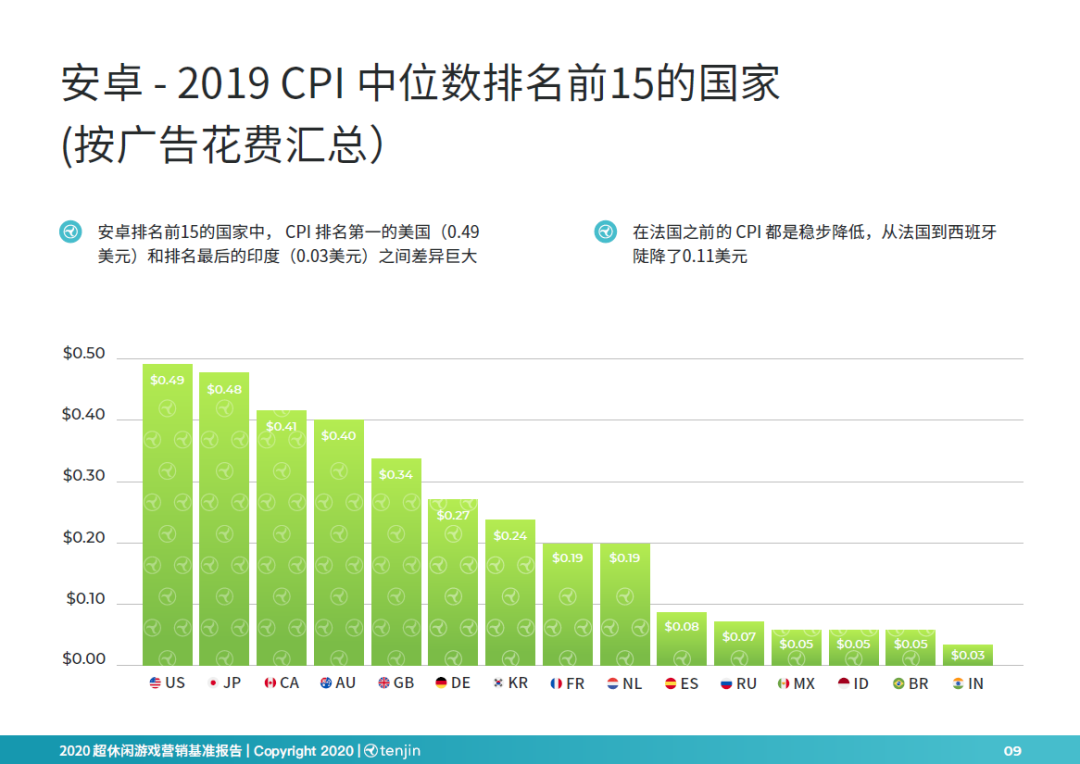 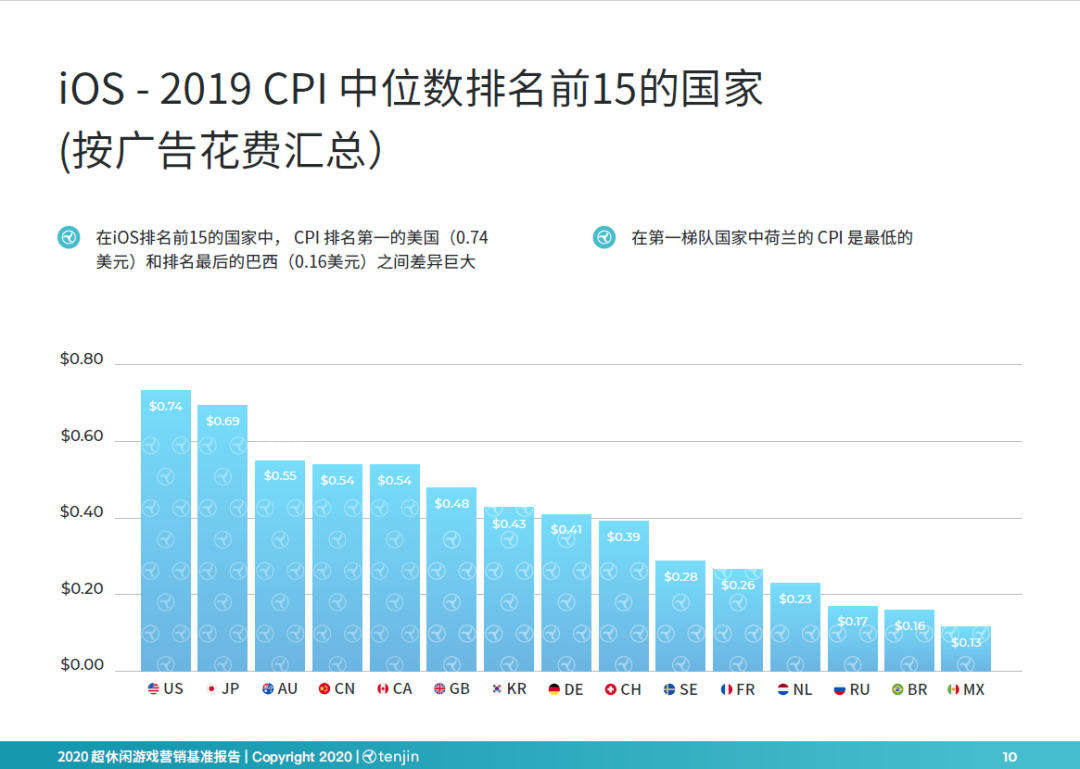 After talking about similarities, look at the differences between the two platforms.The first is that the difference is even greater, with the median CPI in the top 15 countries of the Android platform significantly higher than that of the iOS platformOn Android, the median CPI in the U.S. ($0.49) is 16.3 times higher than in India, and on the iOS platform it's only 5.69 times ($0.74 in the U.S. and $0.13 in Mexico).

The iOS platform's median CPI performance is more consistent and natural in terms of differential and echelon distribution.The huge difference and apparent fault in the top 15 of the Android platform CPI is a reflection of the immaturity of ultra-casual gaming in emerging markets and a reflection of the uneven type of Android platform users in some markets.At the same time, the very low CPI compared with the developed countries of the gaming industry also shows that ultra-casual games in Brazil, India, Indonesia and other emerging markets still have a large market space. 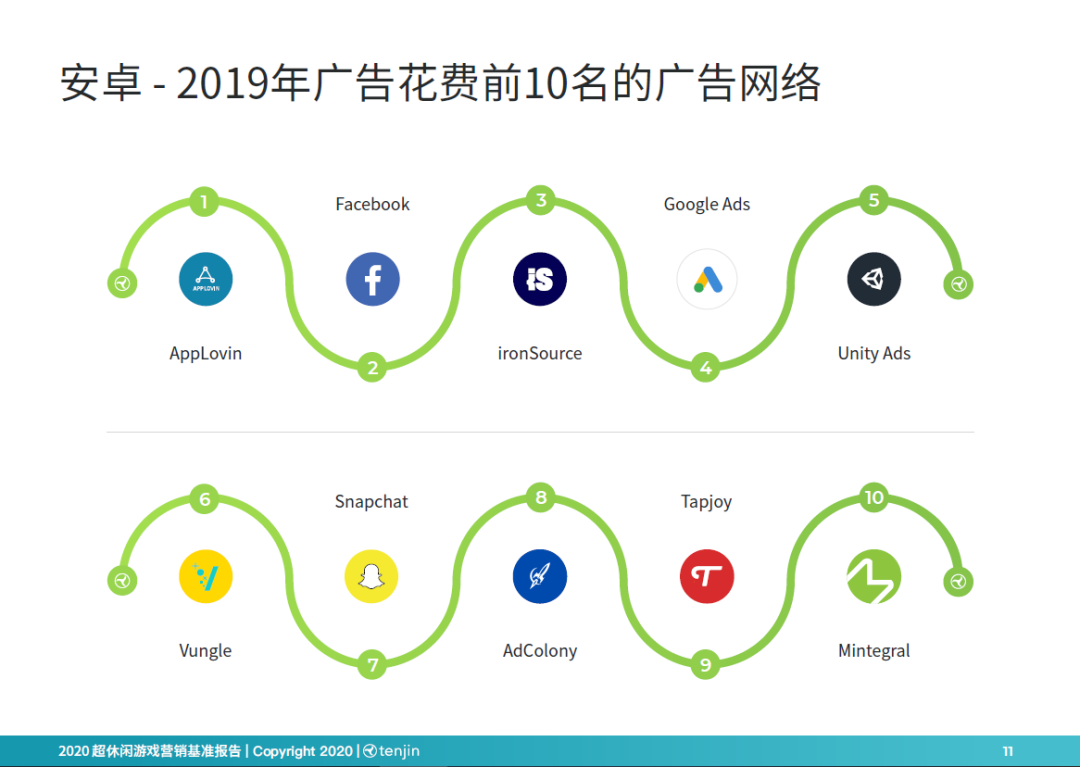 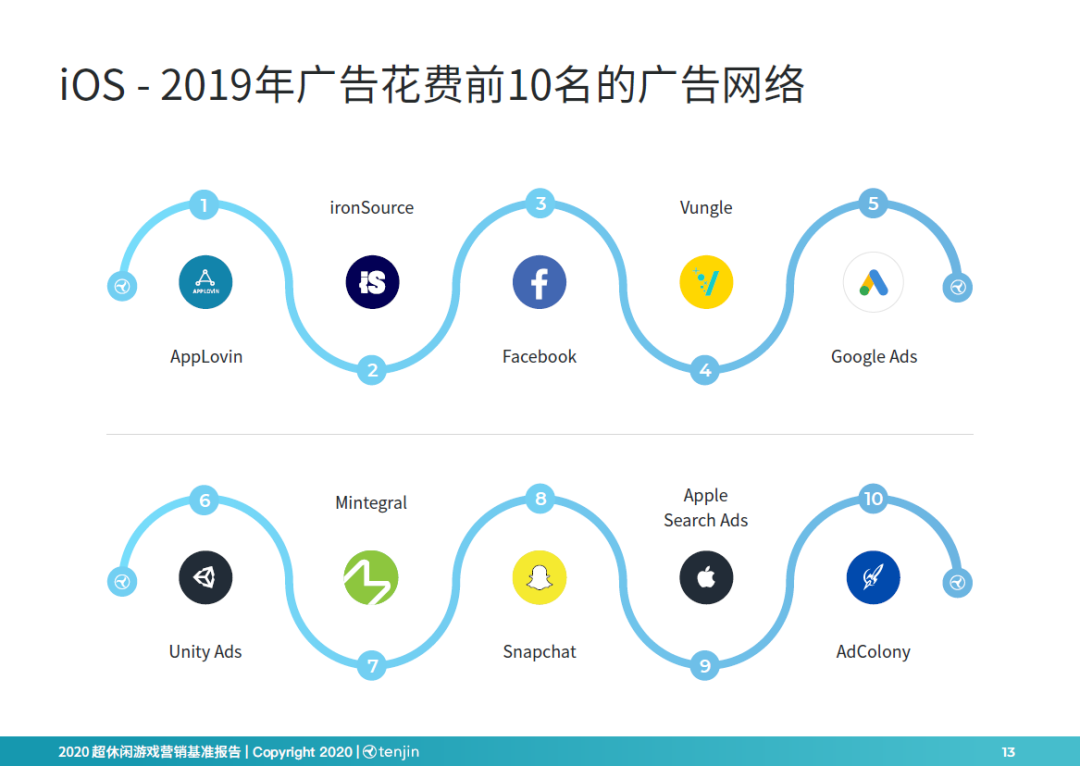 In terms of ad networks, the top 10 ad networks for dual-platform advertising spending are basically the same, with only a difference in ranking, with Applevin as the top aggregator. Tapjoy appeared only on Android's list, ranking ninth. Apple Search Ads is the ninth-largest iOS platform. AppLovin takes the top job with dual-platform advertising. It's no surprise that Lion Studios, the game publisher owned by AppLovin, spends a lot of money on ads for ultra-casual games. The other five in the top six are: Facebook, IronSource, Google Ads, Unity Ads, Vungle. 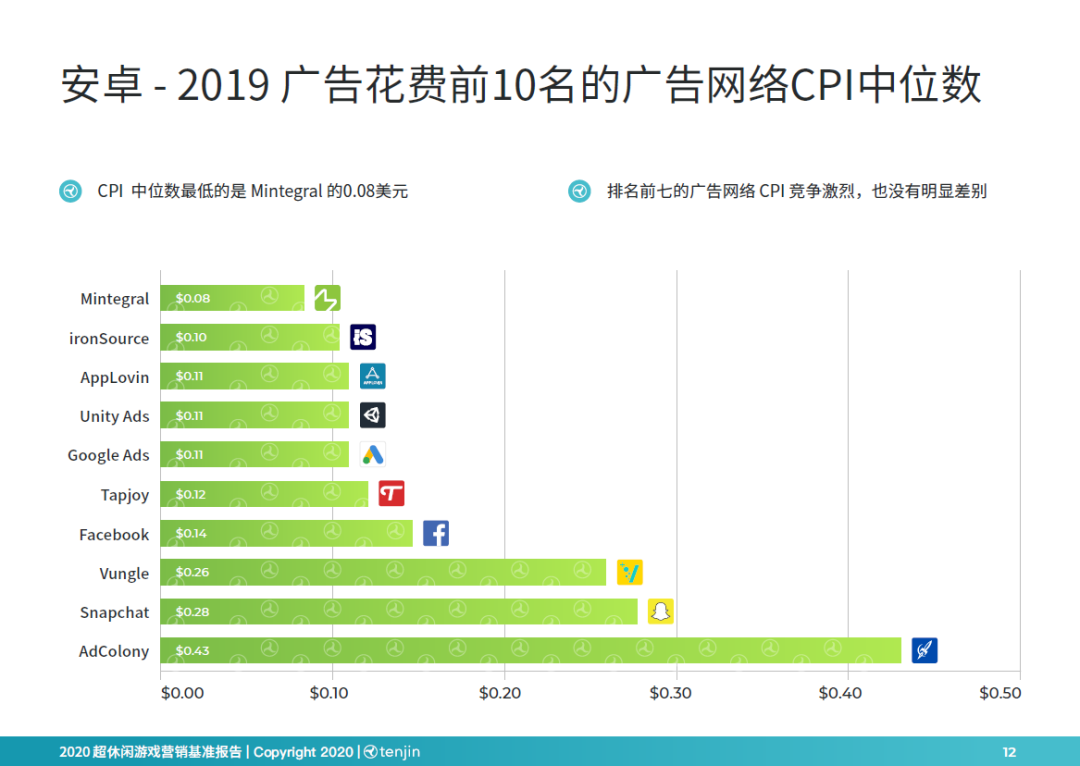 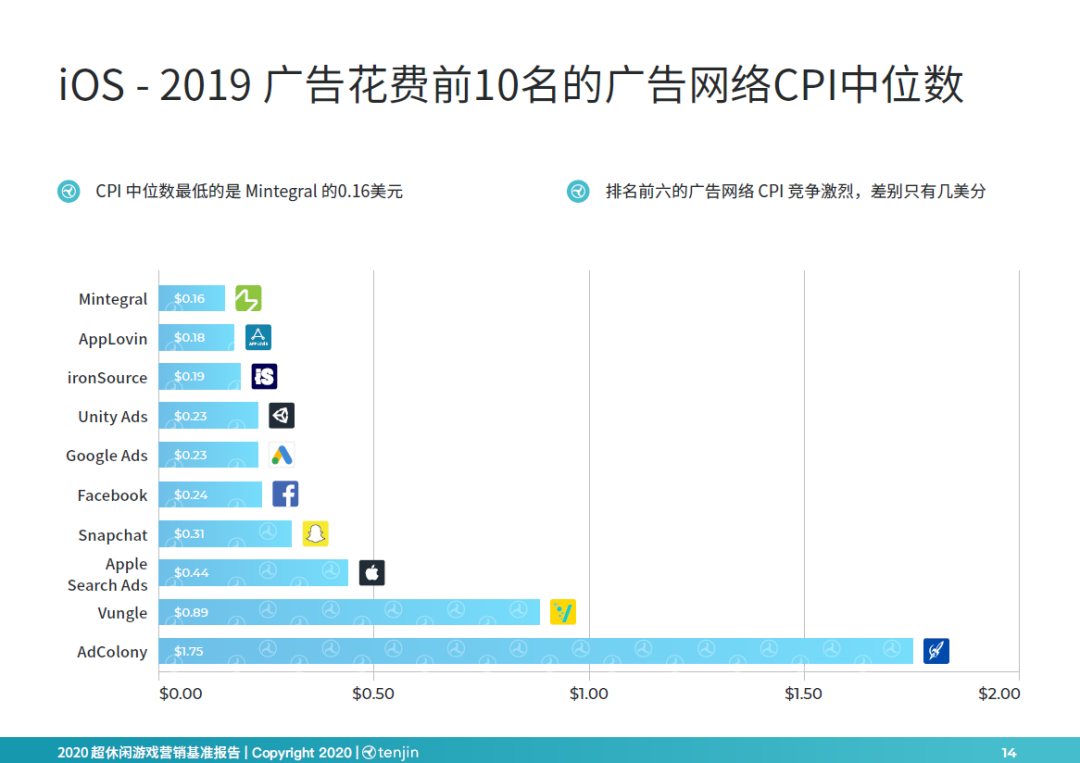 In terms of the performance of individual ad networks, Snapchat failed to make the top six in the median CPI, which is related to western European countries with a higher median CPI for its main user base. In the Ad Platform Comprehensive Performance Report (10th edition) released by AppsFlyer in March this year,Apple Search ads isn't particularly good at ultra-casual gaming advertising, but it's a global leader in tool app advertising.

AdColony's median CPI is significantly higher than other ad networks. According to its official website, AdColony is one of the first companies to develop applications on the iOS platform, they attach great importance to advertising creativity and quality, and have a deep understanding of user retention and transformation, while paying attention to the user to bring a good experience.

In the top 10 ad revenue lists, the "two-headed monopoly" has eased on the iOS platform 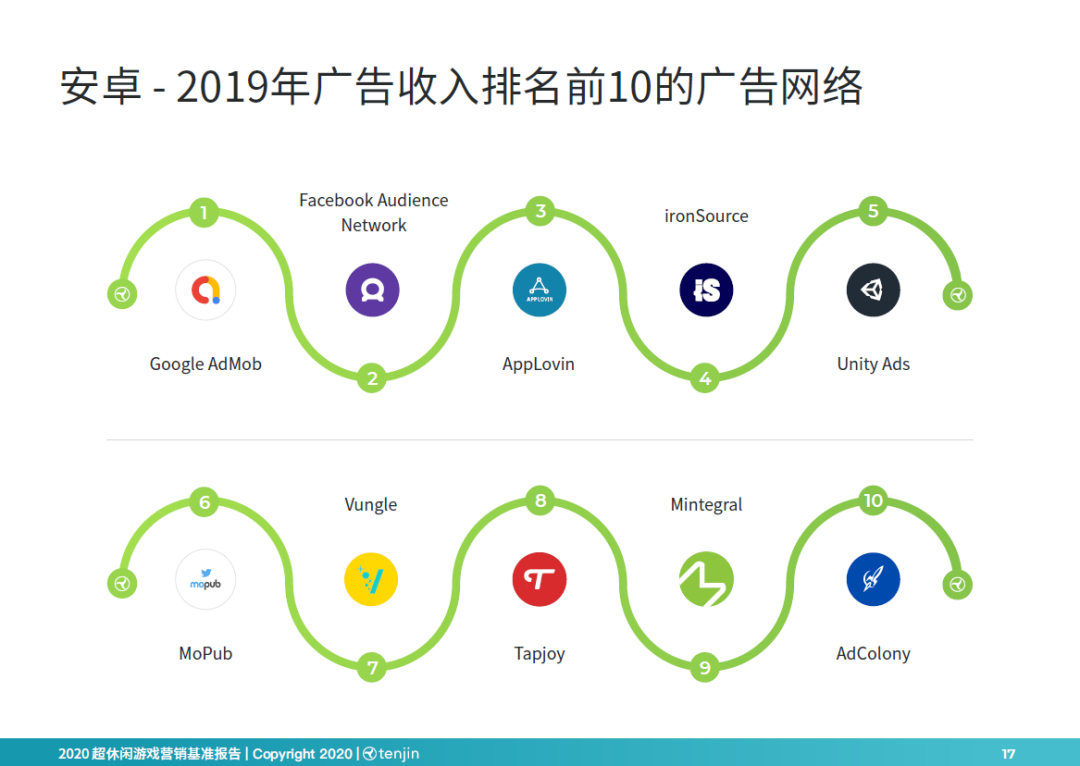 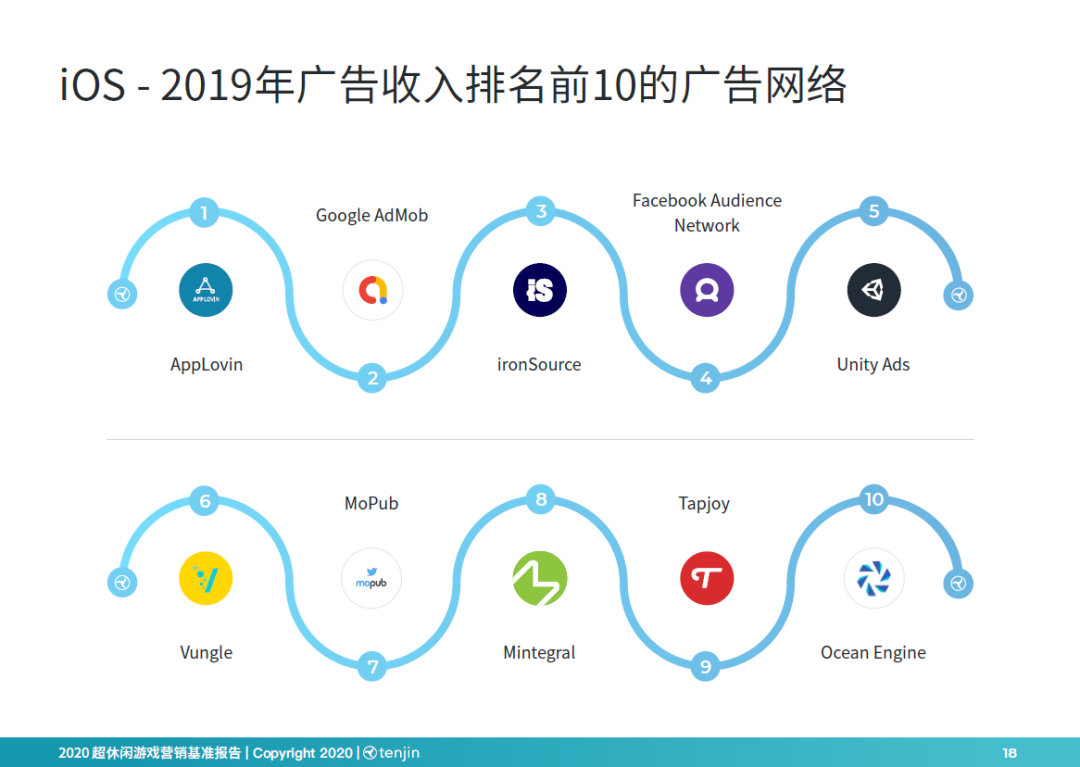 In terms of ad realization, 63% of the revenue from ultra-casual game publishers comes from iOS platforms and 37% from Android platforms, which is only 1% different from the two platforms' advertising spending.

In terms of advertising platform revenue rankings, Google and iOS, which have long touted Android as the top platforms, are at the top of the dual-platform rankings. In addition, it is worth noting that MoPub, ironSource and other aggregation platforms are also very bright performance.Google and Facebook's dominance on both platforms appears to be being challenged by other head companies.

In AppsFlyer's Comprehensive Performance Report for Advertising Platforms (10th edition), released in March, the top five in the Composite Performance Index were: (1) Google Ads, (2) Facebook, (3) IronSource, (4) AppLovin, and (5) Unity Ads, which is exactly in agreement with Tenjin's top five ad networks in its dual-platform advertising revenue. These companies have not only achieved world-leading advertising performance, but also in the ultra-casual gaming sector.

Tapjoy didn't make the top 10 ads spent on iOS platforms, but appeared in the top 10 in iOS platform ad revenue. Tapjoy was named ROI's top media resource on both iOS and Android platforms in the 2020 Singular ROI Index report released in February, while ROI on dual platforms in Europe and Asia Pacific continued to grow.

Also not in the top 10 of iOS platform ad spending but in the top 10 of ad revenue is OceanEngine (The Big Engine).Ocean Engine is the official marketing service brand for products such as headlines, shakes and watermelon videos. It also shows to some extent that the 400 million-day live holding based on jitter, and the jitter small program exempts the short link that can be downloaded and clicked. Byte beats are a big gain in the field of small programs in 2019.

The Tenjin 2020 Ultra Leisure Game Marketing Benchmark Report shows us the basic picture of global ultra-casual game advertising and realization in 2019, starting with both national and advertising networks. Despite the slowdown in growth, through the very low median CPI in countries such as Brazil and India, we canIt is estimated that ultra-casual games still have a large market space in emerging markets.In terms of advertising networks, the competition among head enterprises is very fierce.Ocean Engine's entry into the top 10 of iOS platform advertising revenue was impressive.Affected by the outbreak, in 2020 "home" economic development is rapid, ultra-leisure games in this year's performance is worth looking forward to.

Fill out the form to get the original report

A picture to read: in-app bidding, innovations that must be understood by 2020

With top 10 worldwide, how does this advertising platform break through with product technology?

Dry goods . . How do I fine-tune my delivery with multiple iterative interactive ads?

Congratulations to Ohayoo Wobble Man on reaching the top of the U.S. free game list

Dry goods . . How medium-heavy games can be fine-tuned in video channels

Hengyang, the director of a hospital misappropriated 1.6 million advertising dollars, just to give you gifts!
Global Ultra Leisure Game Advertising Spending and Revenue Top 10 Advertising Network List and 4 Key Points - "Ultra Leisure Game Marketing Foundation Report 2020" Morketing Global interpretation
How much is it to hit an ad once? Will conversion rates be low?
Court jurisprudence: Advertising expenses are not fully listed in the financial documents, the vouchers provided can not accurately reflect the advertising expenses, is "advertising costs can not be calculated or significantly low" situation
Ad space co-price