Watch:Is the fact that Google's Amazon Facebook and Apple's monopoly are really a nail in the coffin for malicious takeovers and misuse of data? 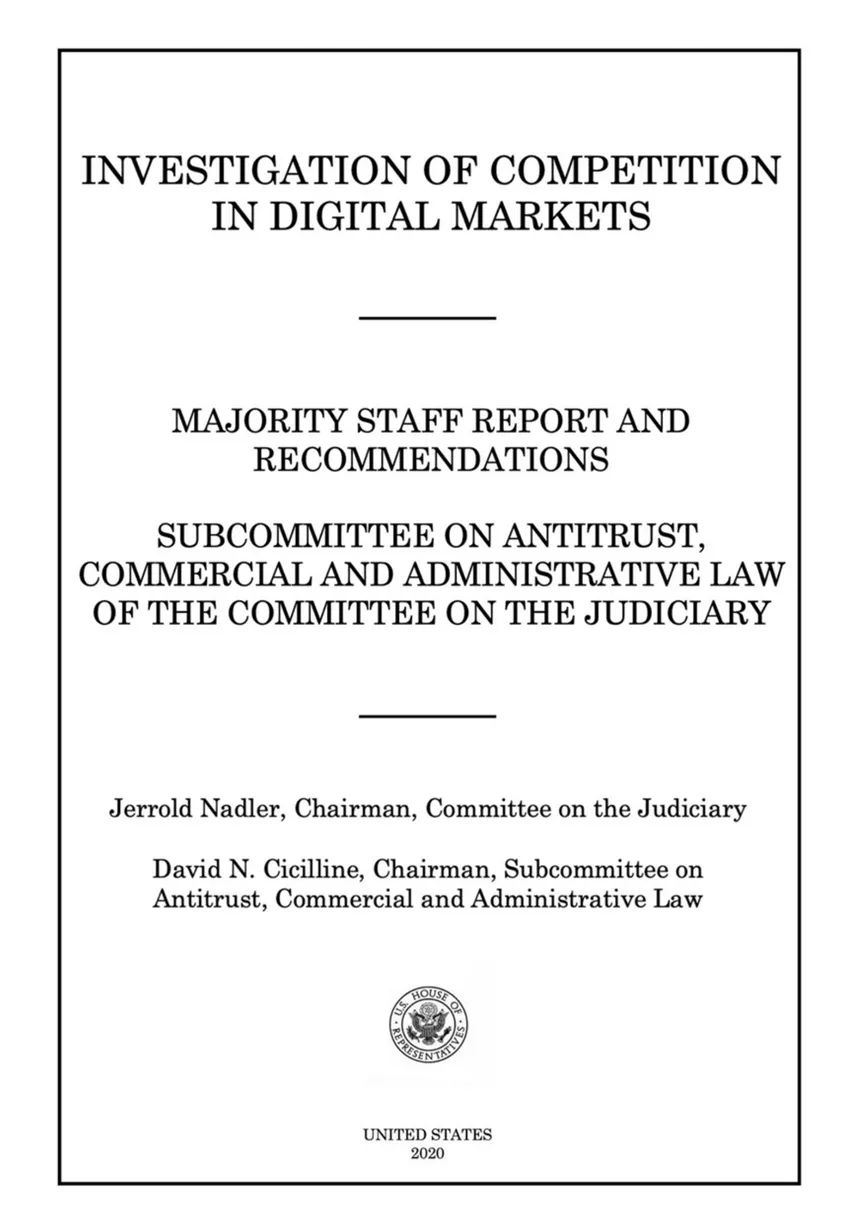 On October 9th EST, the House Judiciary Committee released a 449-page report detailing the monopoly investigations of Apple, Amazon, Google and Facebook over the past 16 months, which found that they all had monopolies that used "lethal acquisitions" to crush rivals, overcharged fees and forced small businesses to sign "oppressive contracts", and made antitrust recommendations, including forcing technology companies to break up and implement business structures.

The report says that while these companies were once "low-status," "aggressive" and "challenging authority" start-ups, they have made a significant contribution to society. But after years of competition, they have gained a clear advantage, have become monopolistic enterprises, and have a trend toward the United States past oil tycoons, railway tycoons.

In this issue of Smart In-House, we recommend this antitrust report, which consists of six main parts, including report introductions, digital market research, background, market research, and recommended solutions. Here we present the findings of the U.S. government's survey of four tech giants.The rest of the contentNo, you canTo.In.Wisdom.East.Xi.（Public.publicnumber：zhidxcom）Back.Complex.offKey.Word.“nc492”Been.Take.。

《Investigation of competition in digital markets》

The survey found that Facebook has a monopoly on social media. Among them, Facebook mobile apps are the third-largest mobile app, with 200 million users in the U.S., or 74 percent of U.S. smartphone users.

According to the report, Facebook's high market share has allowed users to spend far more time on its apps than its competitors, with social media users spending an average of 48.6 minutes a day on Facebook in 2018, higher than Snapchat (21 minutes) and Twitter (21.6 minutes).

Facebook's continued high market share is unable to compete with other companies because of the high barriers to entry. These include their powerful network effects, high switching costs for consumers, and data advantages.

In addition, the report argues that Facebook's strategic approach to acquiring and copying products has stifled competitors. Since its inception in 2004, Facebook has acquired at least 63 companies, including software companies Instagram, WhatsApp, Face.com, Atlas, LiveWire and Onavo; virtual reality and hardware company Oculus. The report singled out Facebook's deal with Instagram, saying it bought it to eliminate competition from Instagram. 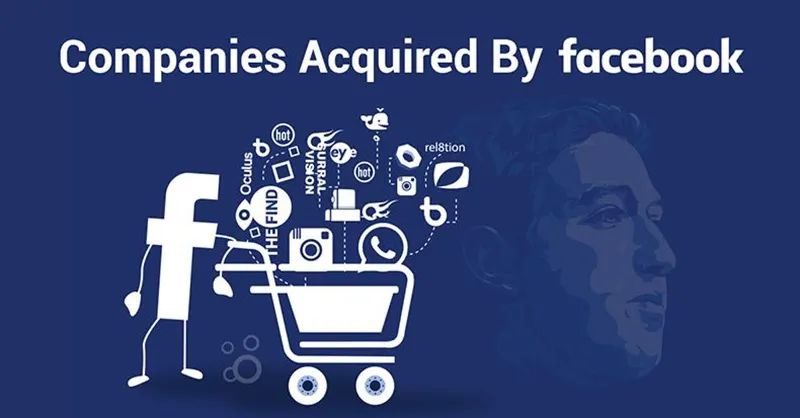 In 2012, an investor statement prepared by Facebook said it had a "persistent competitive advantage similar to that of other historically dominant companies". According to the document, Facebook has nearly 100 percent of the market share among 25-34-year-olds in the United States. It also has a penetration rate of more than 85 per cent in some countries. The report also highlights the fact that within a decade, there will be few companies that can compete with Facebook. 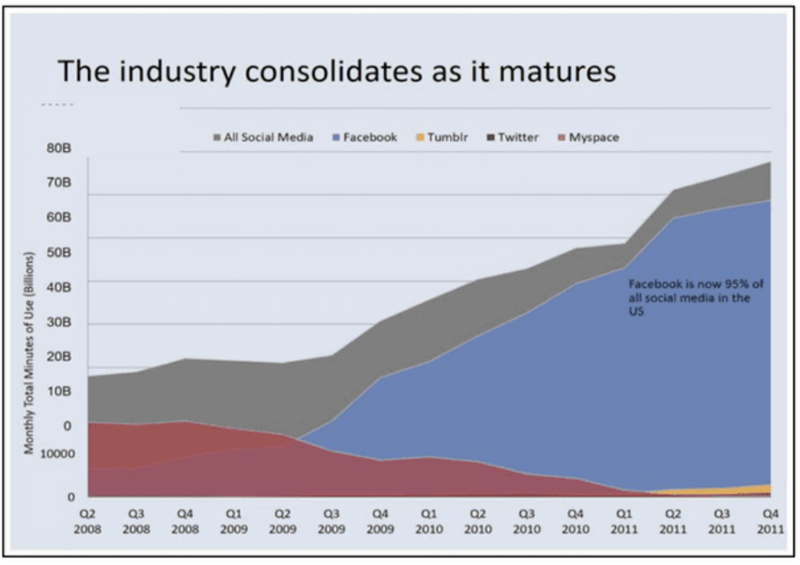 Finally, the report found that Facebook was abusing its monopoly power to eliminate competition. Facebook leverages data advantages, sometimes even private data, to gain market intelligence to identify potential competitive threats and then wipe them out through acquisitions, shanzhais, or direct elimination.

Once dominant, Facebook selectively enforces its platform policy based on whether it sees other companies as a competitive threat. In this way, while weakening other companies, it also provides an advantage for its own services.

Google has been the focus of antitrust concerns, with an "overwhelming" advantage over search market owner. According to public data, Google has an 87% share of the U.S. search market and a worldwide share of more than 92%. Although the Internet has changed a lot over the years, moving from the desktop to the mobile side. But Google has maintained its advantage.

According to the report, there are two main factors that make Google immune to external competition: 1, the high cost of search servers, and 2, the self-reinforcing advantages of clicking and querying data, allowing search engines to continuously improve the relevance of search results.

Given that Google's search algorithm has been improved with trillions of queries, even a upstring that ensures the necessary capital to invest heavily in computing infrastructure will find itself at a considerable disadvantage.

At the same time, the steps taken by site owners to block non-Google crawler missions to create a separate integrated index are challenging, if not impossible.

In addition, the report found that Google maintained its search monopoly by identifying its advantages through data theft and home-first methods to improve search results by obtaining information from unauthorized third parties. In other cases, it has made changes in search to give its services an advantage and to disadvantage competitors' products. 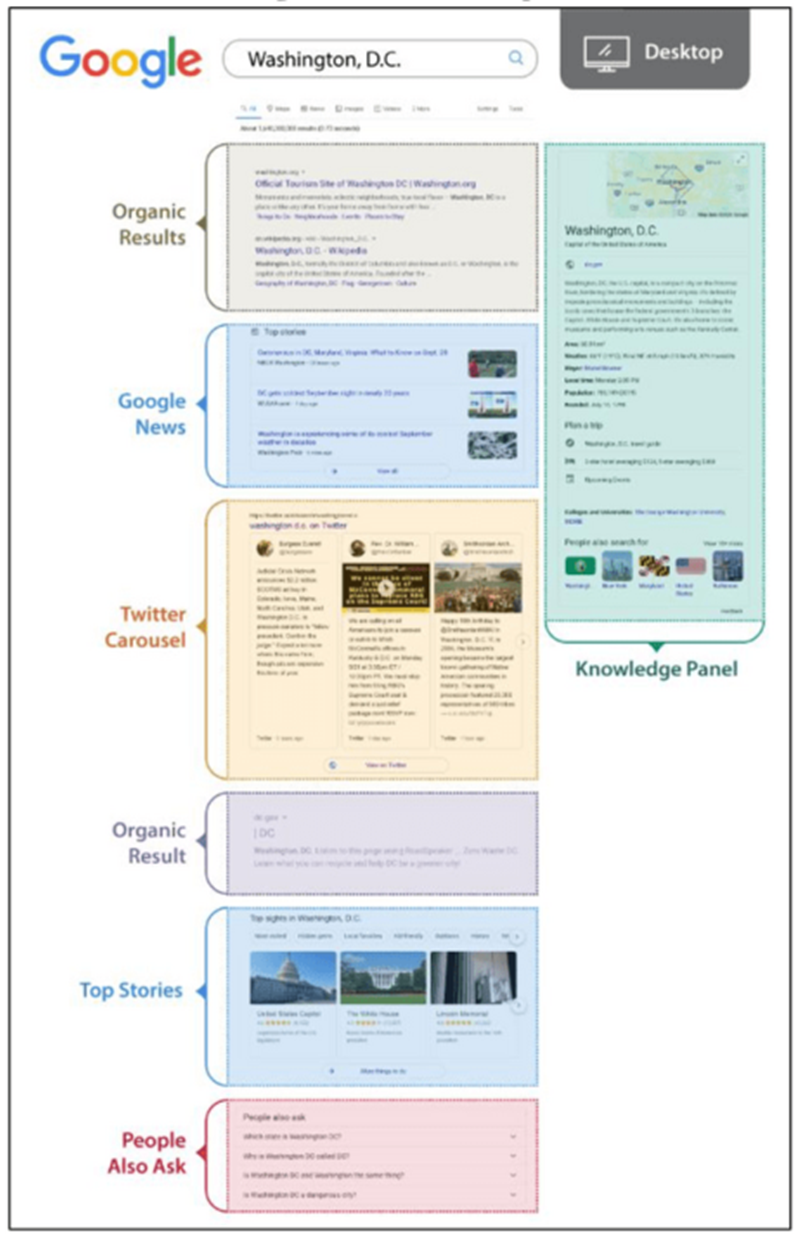 Google put its own favorable results at the fore, and its competitors at the back

When using Google Search, it puts its vertical content or ads on the line, rather than better, more relevant competitors' products. Google has tweaked its search algorithm to automatically boost the ranking of some of its services over its competitors, according to google's internal files. This puts these competitors at a disadvantage.

Considering that the likelihood of users clicking on a list drops sharply with each drop in the rankings, traffic from Google's demoted competitors has dropped dramatically, and the effect is magnified in mobile search, as the phone's small screen means fewer results on the first page. Google is also using android platforms to make people more dependent on its products and services. 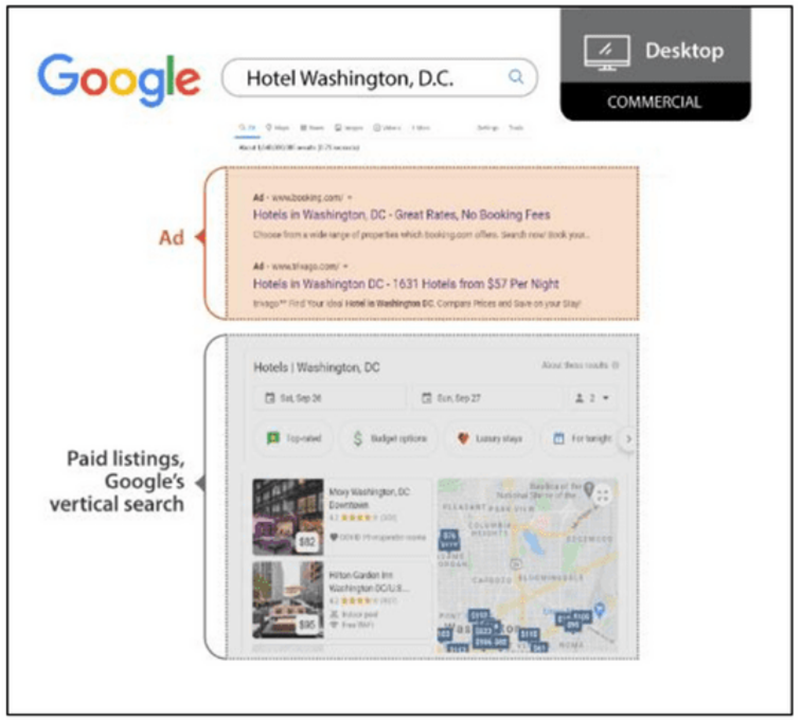 By abusing third-party content and giving preferential treatment to its vertical sites, Google abused its power to search portals online, forcing vertical sites to hand over valuable data and use their search advantages to enter neighbouring markets.

Google's actions have both hampered competition and weakened vertical providers' incentive to invest in new and innovative products. In addition, the report argues that Google has also raised market access prices and reduced the quality of searches.

Amazon has strong and enduring market power in the U.S. online retail market. The company operates in a wide range of markets, including e-commerce, consumer electronics, television and film production, grocery, cloud services, book publishing and logistics B2C and B2B markets. Amazon went public in 1997, but didn't make a profit until 2003.

This is partly because Amazon's business strategy generally focuses on long-term growth rather than short-term profits. Amazon is now one of the world's most valuable companies, and its chief executive, Jeff Bezos, is said to be the richest man in the world. 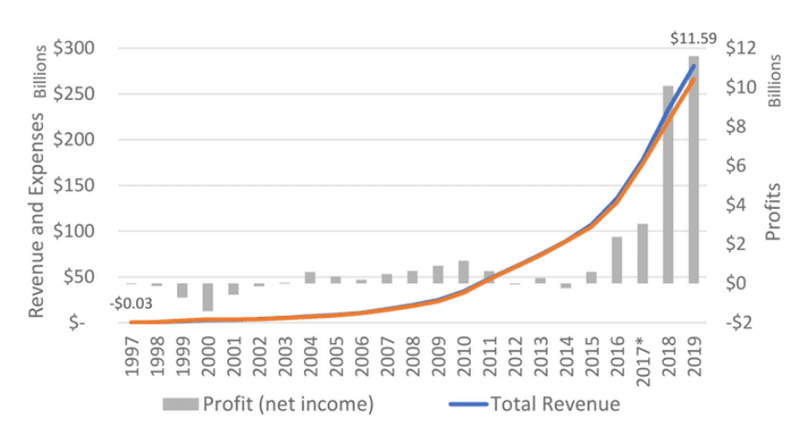 Amazon's revenue and profit over the years

With the exception of Amazon insiders, the company's actual share of the U.S. e-commerce market is unknown because it does not provide third-party data on its total sales. Amazon's share of the market is 38.7 percent, according to an analysis by eMarketer, a market research firm.

Jumpshot, another market research firm, thinks its share is 74%. In addition, Amazon accounts for more than half of book sales and 80 percent of e-book sales in the U.S. market.

The report begins by criticizing Amazon's mergers and acquisitions for making consumers less selective when shopping online and making them less competitive. Amazon has bought at least 100 companies in the past two decades, especially in recent years, and its ambitions have ballooned.

From acquiring direct rivals Zappos and Quidsi to home security companies such as Blink, Amazon has increased its customer data reserves to ensure its monopoly. 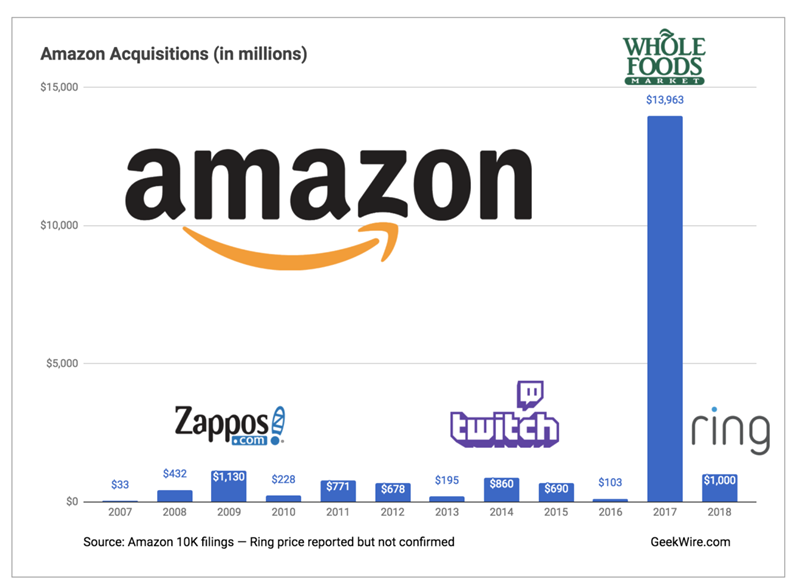 The company acquired by Amazon

Apple is the leading U.S. smartphone provider, accounting for about 45 percent of the U.S. domestic market and more than 100 million iPhone users worldwide. Apple's iOS is also one of two major mobile operating systems.

The report's criticism of Apple has focused on apps. Typically, Apple would charge 30 percent of the cost of downloading apps from its App Store, and 30 percent for apps built-in.

Apple will use its control over the App Store to crowd out competitors, and for unobedient developers, it will remove its apps from the App Store, making it the only way to offer apps to consumers of iOS devices.

Apple's monopoly on software distribution on iOS devices appears to have enabled it to make extraordinary profits from the App Store and its services business. Tim Cook, Apple's chief executive, has set a goal of rapidly double the size of its service business by 2017. Apple finally achieved that goal in July 2020, six months ahead of schedule.

In fiscal 2019, its services business accounted for nearly 18 percent of total revenue ($46.2 billion). In recent years, the service business has grown faster than the product business, growing by more than 41% since 2017. The service category is also Apple's most profitable business, at 63.7 in fiscal 2019 and 67.2 at the end of June 2020. 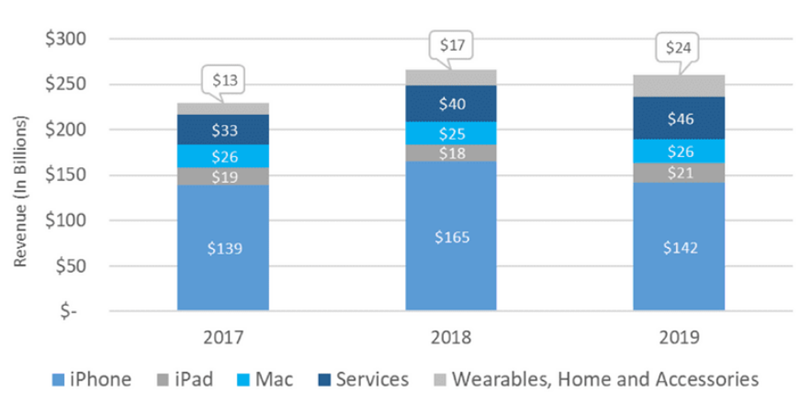 In addition, Apple does not allow third-party device manufacturers to install programs that receive Siri commands; Although third-party hardware manufacturers can make their products Siri-enabled, the voice commands needed to control smart devices must still be implemented by Siri on Apple devices such as iPhones or iPads.

wise thing to thinkAlthough Internet companies have a great contribution to society, but with the development of the Internet industry, some vertical oligopoly competition pattern has been initially highlighted, monopoly problems have indeed caused such as product quality decline, hindering innovation and other hazards. But it seems wrong to blame the giants for their actions as monopolies, and most of the products and services they develop are not intended to be monopolies, but to make them of better quality.

The U.S. government has spent more than a year doing what these tech giants do, and some of the reasons seem valid and some of them are absurd. Is there enough persuasive power for the big four tech giants to go to court for arbitration? And for the tech industry and the average user, there may be different judgments for everyone. 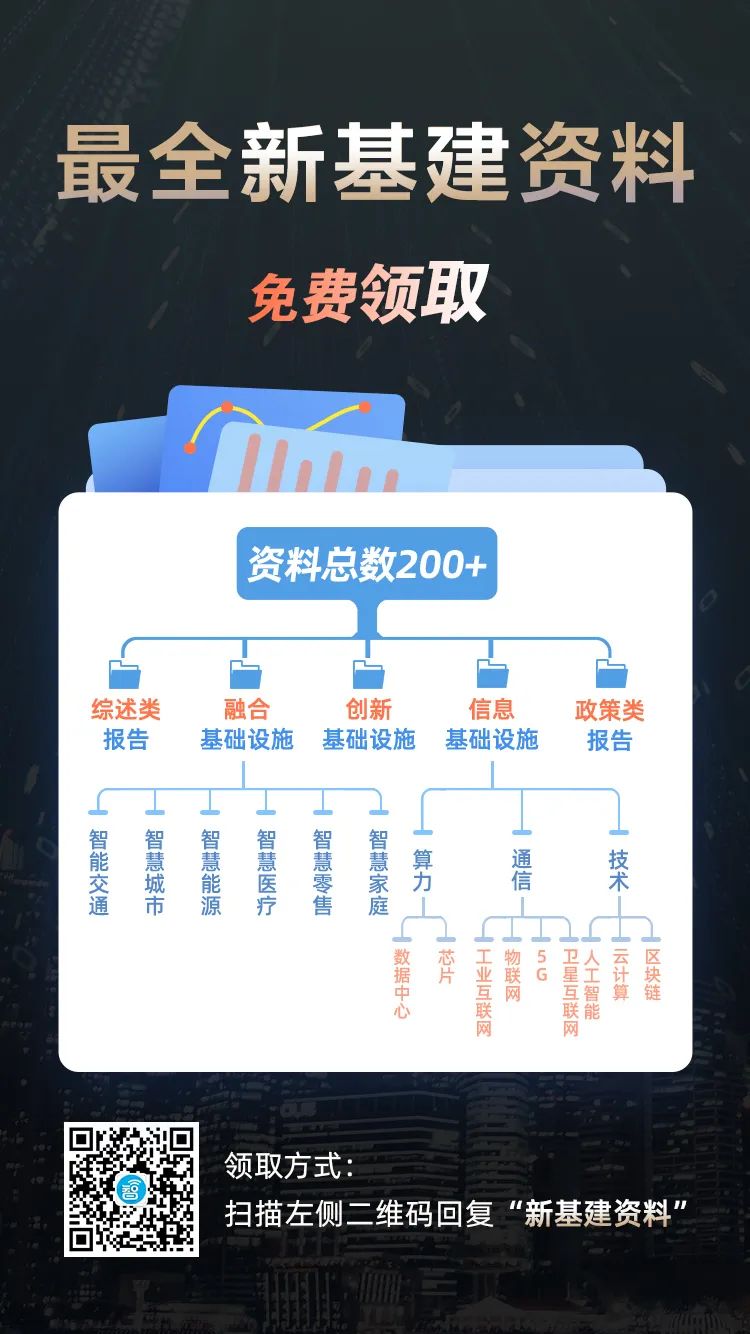 Regain the autonomy of reading
Algorithms under which we are being analyzed and predicted, do you feel it?
Spell more cut price mutual aid group number free cut price
Sending codes to the universe on behalf of humans...
Japan asks foreign media to write the prime minister's name: it's Shinzo Abe, not Shinzo Abe!