Why can Chinese group be chiefs in Africa?

It doesn't match the institute

Dig into the other side of all business-related issues at home and abroad and stir up your thinking about business life and consumerism.

When it comes to African chiefs, many people think of primitive tribes on the savannah, strong, dark Africans with feathered tiaras, totem tattoos on their faces that symbolize the tribal spirit, animal skins, and a large number of guards with bird guns and spears behind them.
This may indeed be the image of some tribal chiefs in Africa in the past, but now that stereotype has to be changed. 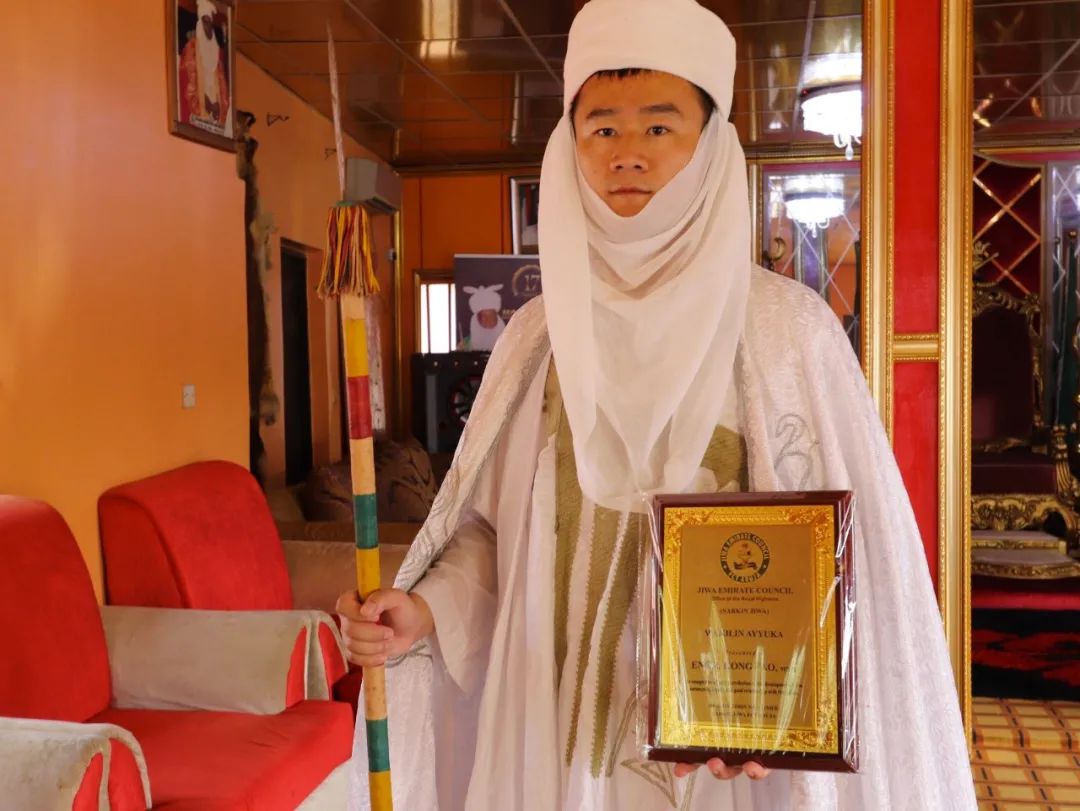 Photo Credit twitter@Engr Kong Tao
The ancestors of black Africans did not expect that in the 21st century, yellow people from Asia would enter the continent and play their own game of power.
Today, there are more and more yellow faces in the Group of African Chiefs, speaking Mandarin and authentic Chinese Chinese, who pick up the sheikh's cane. 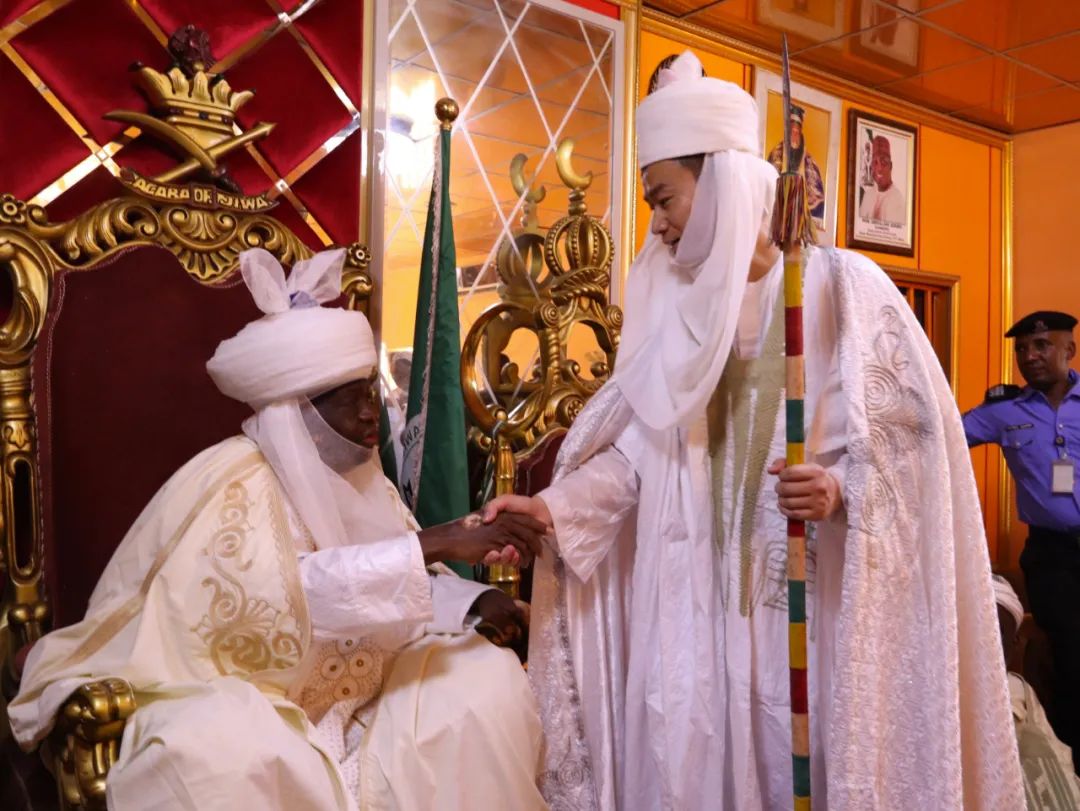 Photo Credit twitter@Engr Kong Tao
Kong Tao, a 35-year-old Chinese boy from Puyang, Henan Province, is one of the newly-promoted African chiefs.
On April 21, 2019, Kong Tao, dressed as the chief of Nigeria, received a certificate and cane of symbolic power from Musa, the Turkish emperor of the Jiwa region of the Ministry of Nigeria, under the watchful eye of a local tribe, and was crowned chief of WAKILIN AYYUKA, meaning "engineering leader".
After the coronation ceremony, he rode around the sealed land surrounded by clansmen. The next day the news returned to China and made headlines. 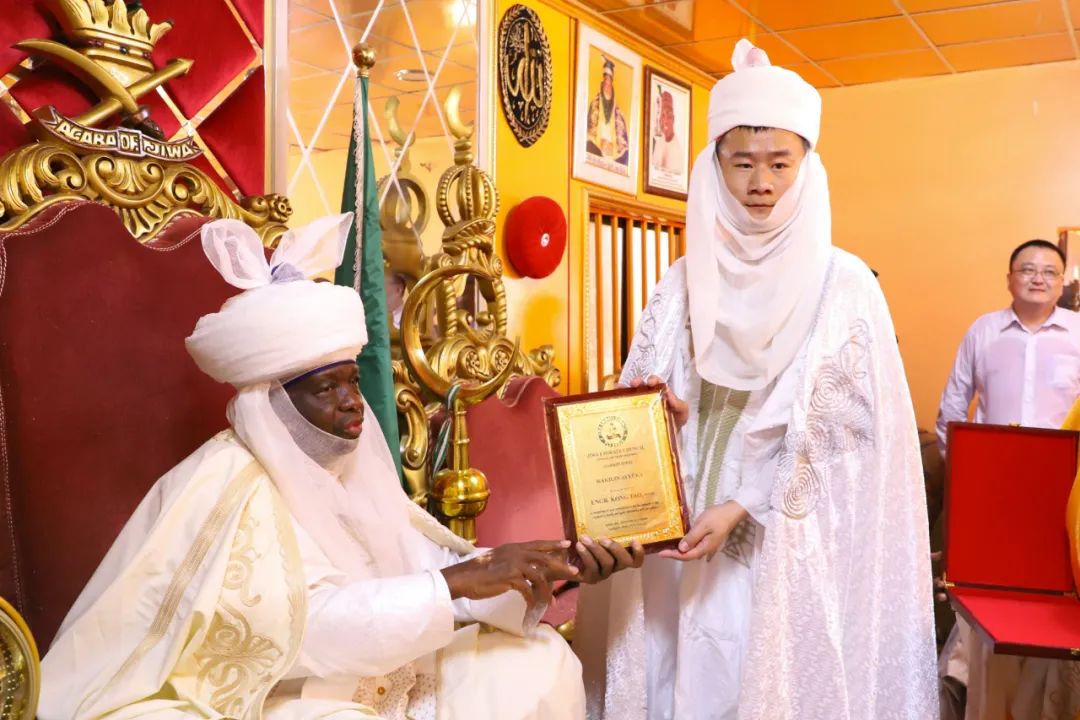 Photo Credit twitter@Engr Kong Tao
In the era of successful learning, Kong Tao reinterpreted another kind of success with his own experience, called to Africa as a chieftain.
This leap across the country and the nation's identity has broadened the imagination of countless netizens in the country, envious of many people are also thinking, why he can become a chief in Africa.
In the past, chiefs did have supreme power in African countries, but now Nigeria has a modern administrative system, and chieftains enjoy high prestige mainly in terms of influence, especially in rural areas.
Chiefs are divided into three levels, one approved by the Head of State, the second by the Minister of Territorial Affairs of the Cabinet and the third by the Governor. Nigeria has a life-long system of chiefs. 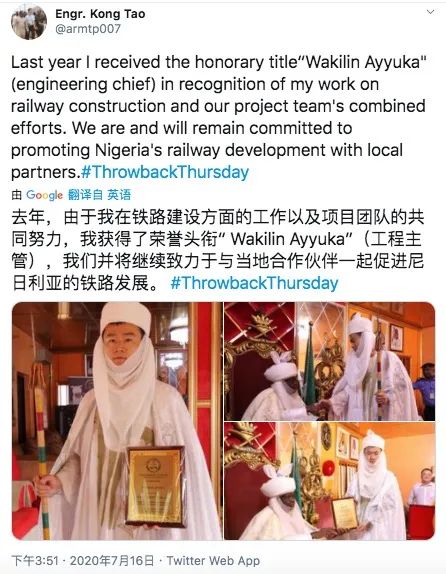 In 2010, kong Tao, who had just graduated from Beijing Jiaojiao University with a master's degree, was hired by China Railway Construction Corporation at the age of 25. Shortly after entering the group, he was posted to the Aka Railway project and the Abuja City Rail project.
For a decade, he saw Nigeria as his second home, following the company's projects to build roads, bridges, railroad tracks, build houses and participate in local rail operations. The locals gave him the title of chief in order to thank him for his efforts.
On the African land, Kong Tao is not the only Chinese chieftain, with four chiefs in their unit alone. The reason why these Chinese workers have been sealed as chiefs is because of their outstanding contribution to local construction. 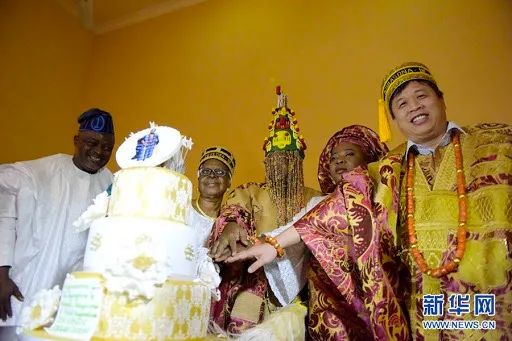 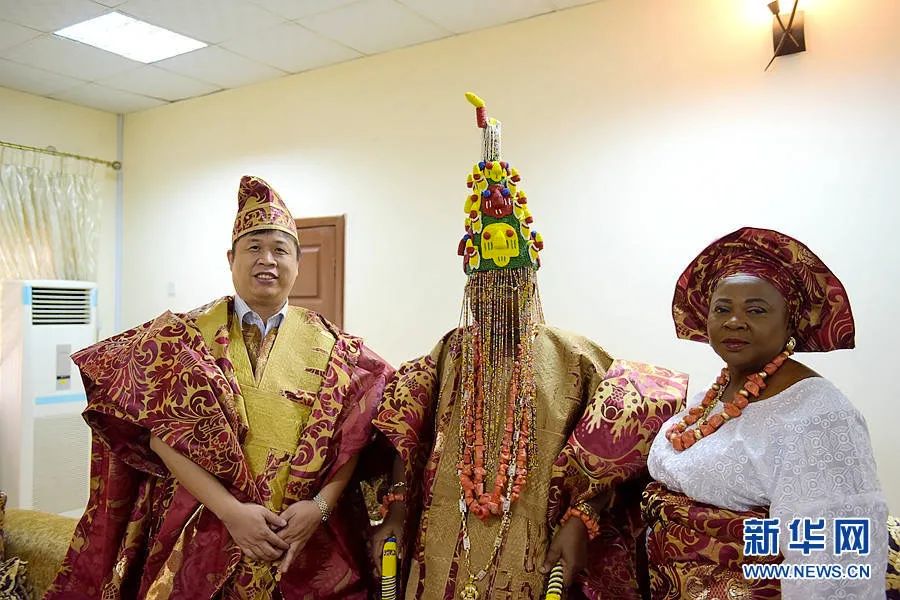 Before the coronation ceremony, Li Qingyong (left) was pictured with his wife Kabilu Adivali Shotobi (centre).Photo credit: Xinhua.com
Chinese support Africa, in addition to infrastructure, but also education. The only person in education to receive the chiefdom award is Yu Zhangbao, a professor from Xiamen University.
As the Chinese dean of the Confucius Institute at Namdi Azikwe University, he represented Xiamen University in his cultural and educational careers in Nigeria, where he was awarded the title of Chief on September 12, 2019 for spreading Chinese culture and cultivating a large number of local talents. 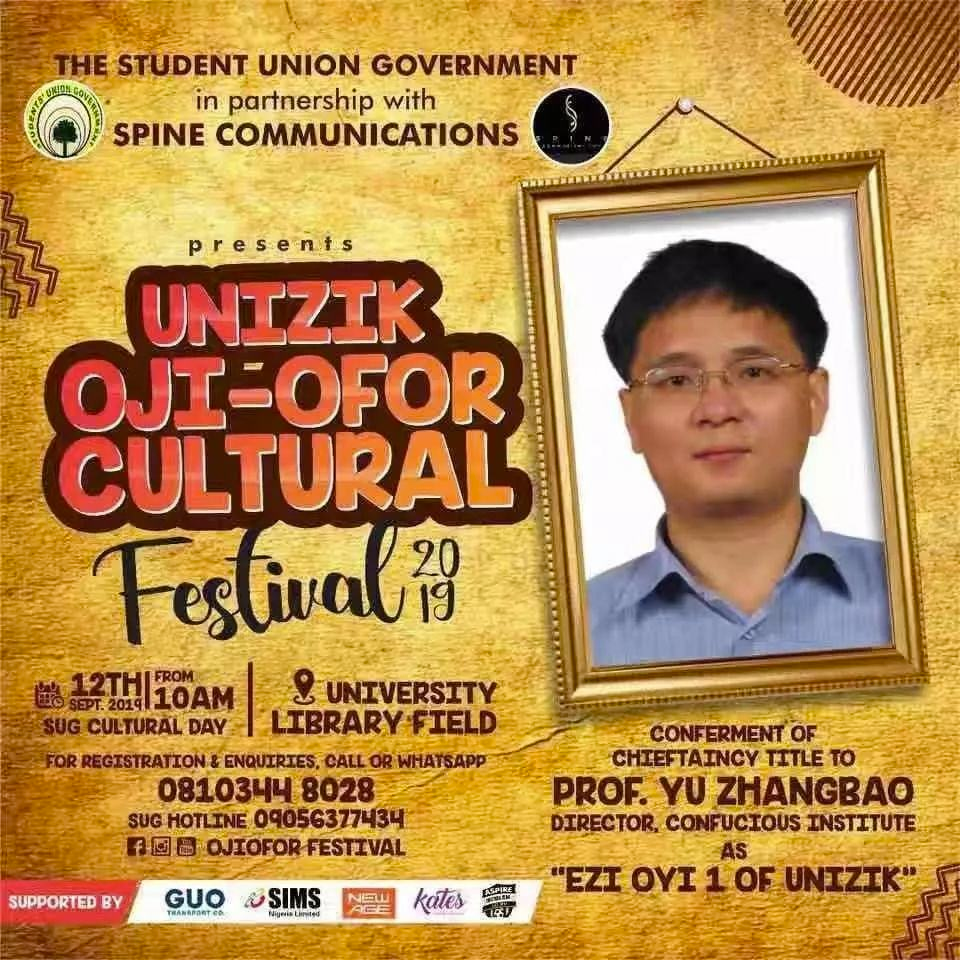 Local coronation ceremony advertising
At the coronation ceremony, the king circled the square to seal a book of auspicious places, led Yu Zhangbao into the seat, and blessed the prayer. Locals hudded around Yu Zhangbao and placed their hands on his head as if to summon mysterious ancient tribal forces from his body.
Then the king gave him the chief's uniform, the beads, the bracelet, the chief's hat, and finally the ivory that symbolized the chieftain's authority. From the day of his coronation, locals have called Yu Zhangbao "EZI OYI 1 UNIZIK", meaning "the first friend of the university". 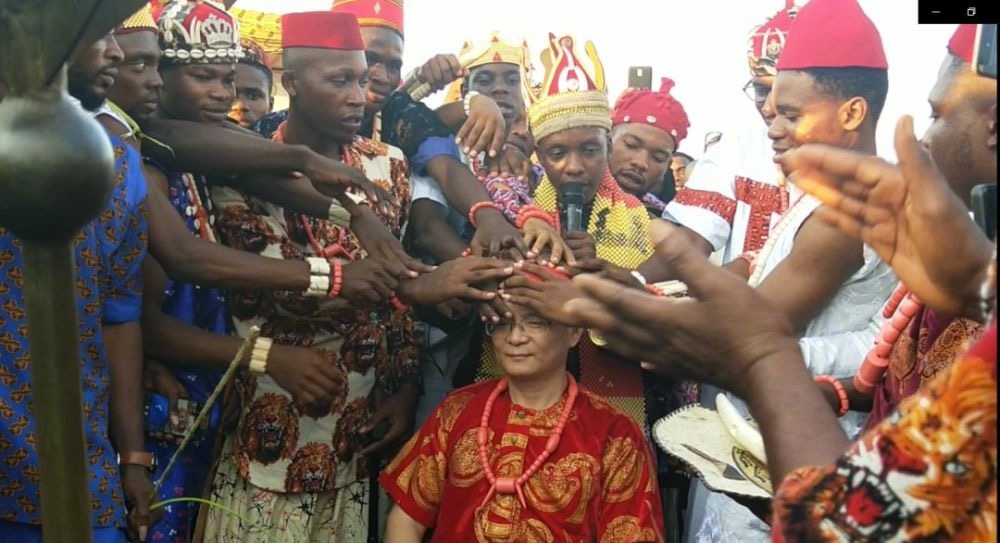 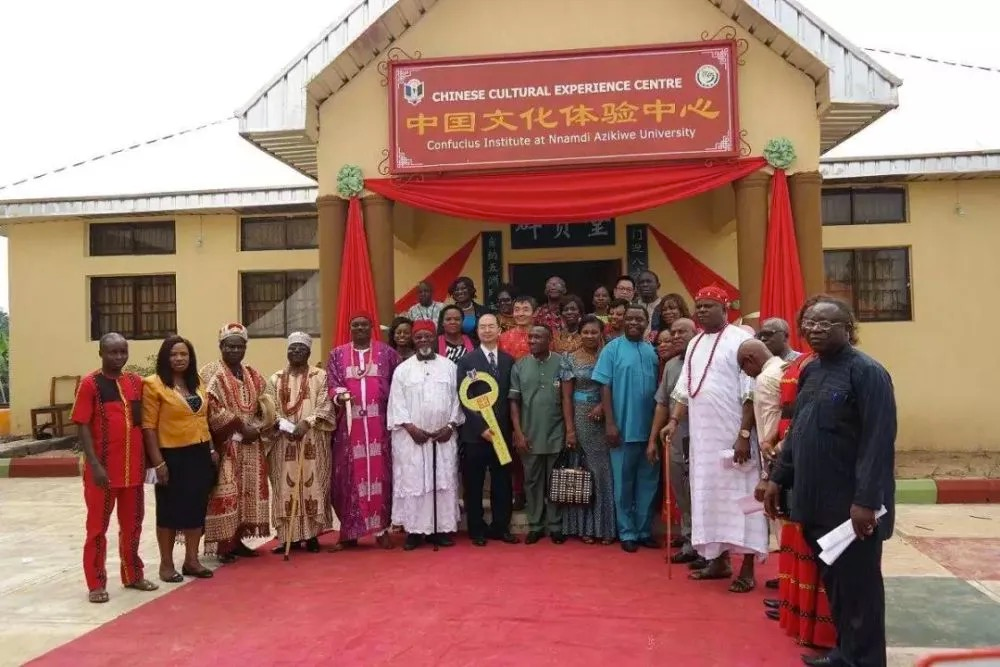 Compared with the previous chiefs, the dry Jiaxuan from Wenling, Zhejiang Province, is taking a different path.
After arriving in Africa in 2008, with his keen sense of business, he came to Nigeria alone and earned his first bucket of gold by importing and exporting timber and agricultural products.
Since then, he has not only invested in local industries, driven employment to boost the economy, but also done a lot of good. Like Bethun, he worked on everything in the area. 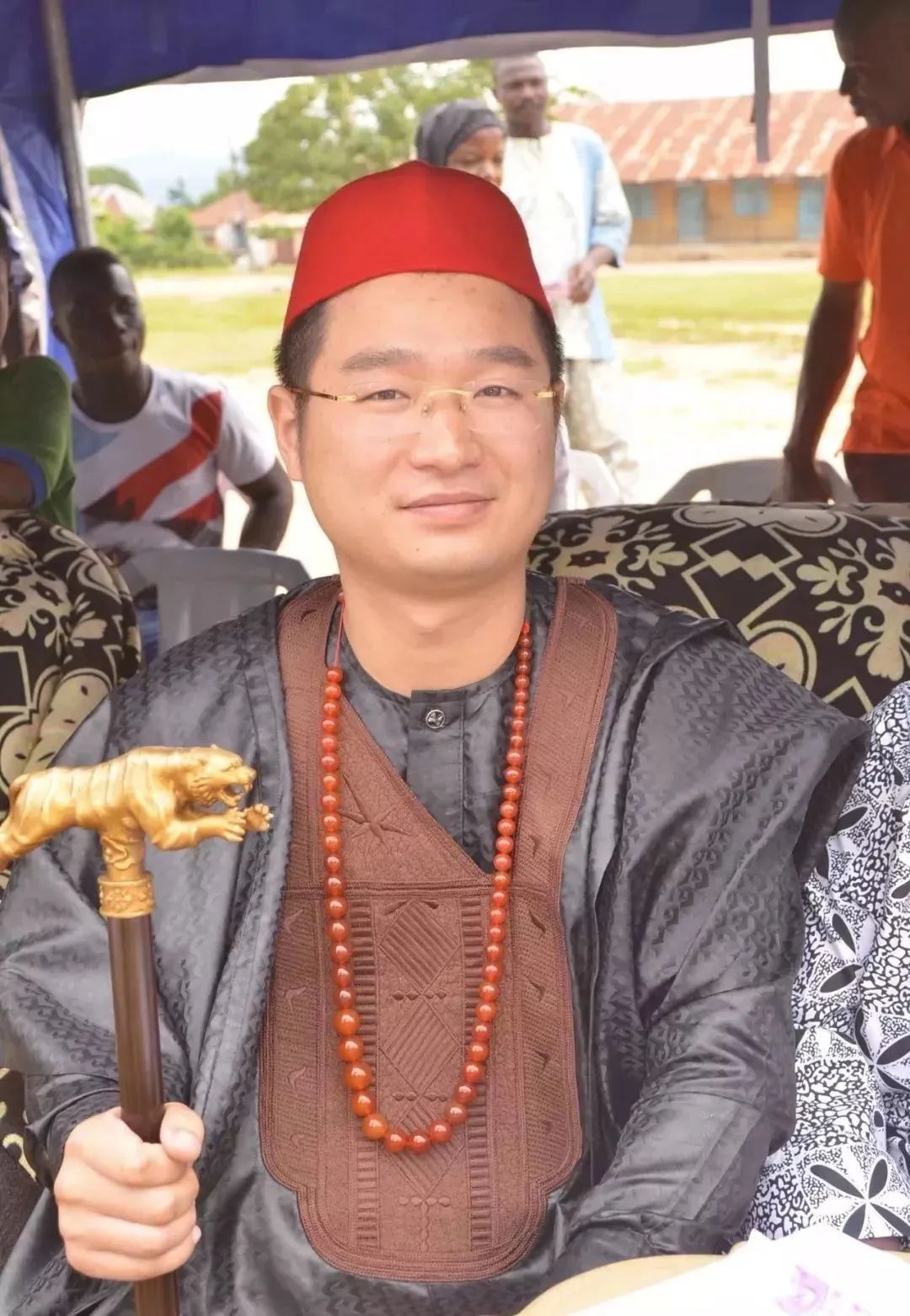 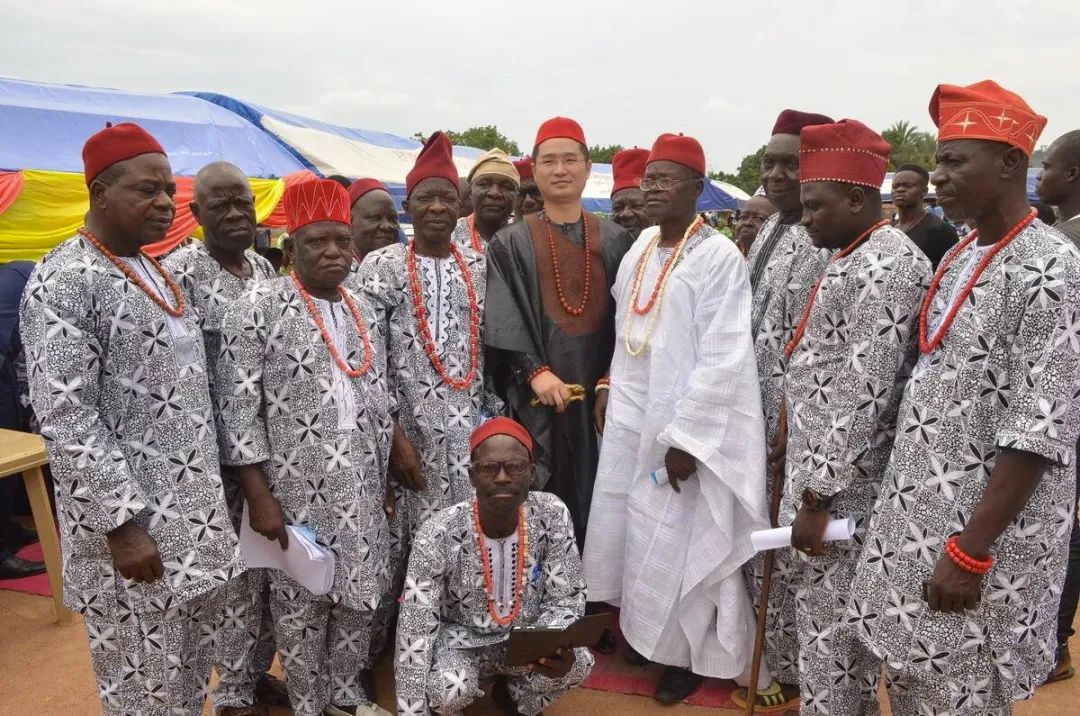 On November 2 last year, Muses Antoinbi, the land king of Koji state, decided to seal the Young Chinese Man Jiaxuan as the life-long hereditary "GBELUNIYI OF BAGIDO LAND" chief and to hold a coronation ceremony for him.
Musses Antoinbi, the king of Turkey, walked the red carpet dressed in a letter of necklaces, bracelets, hats and canes. In the witness of the public and the media, more than 1000 people participated in the coronation ceremony of the chief of the Dry Jiaxuan.
In addition, Kan Jiaxuan also has the chief's exclusive license plate, traffic police, the army on the road card can be exempt from detection, no obstruction. 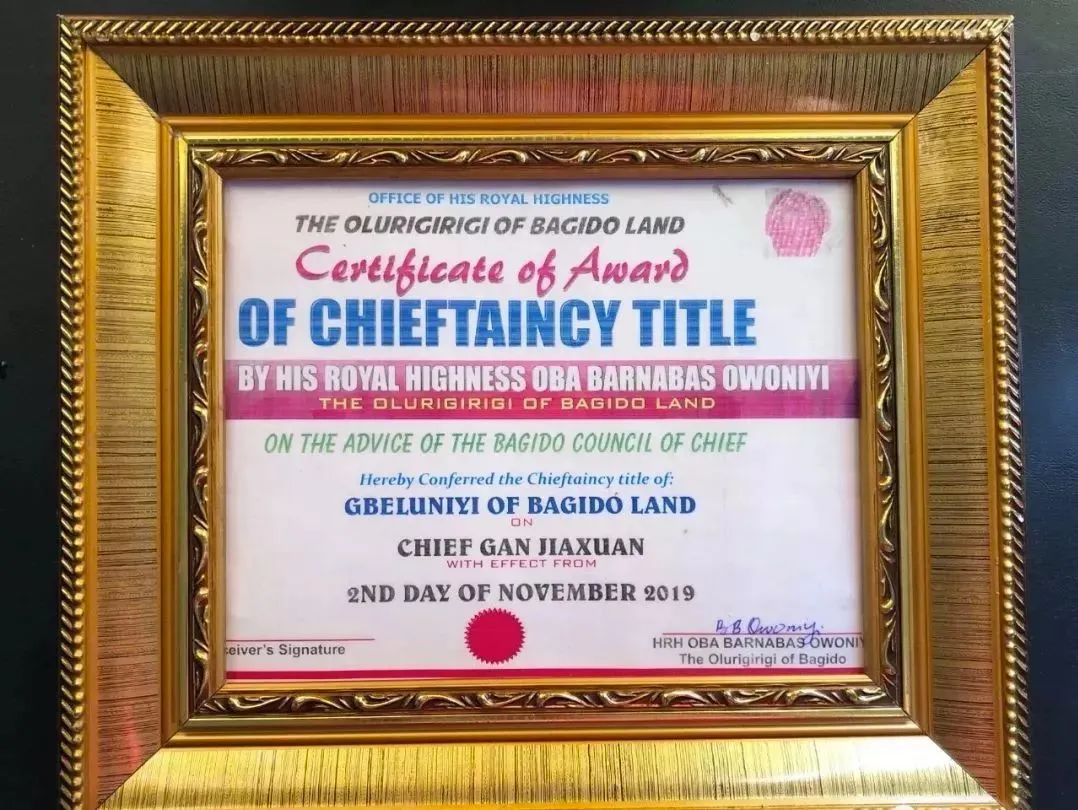 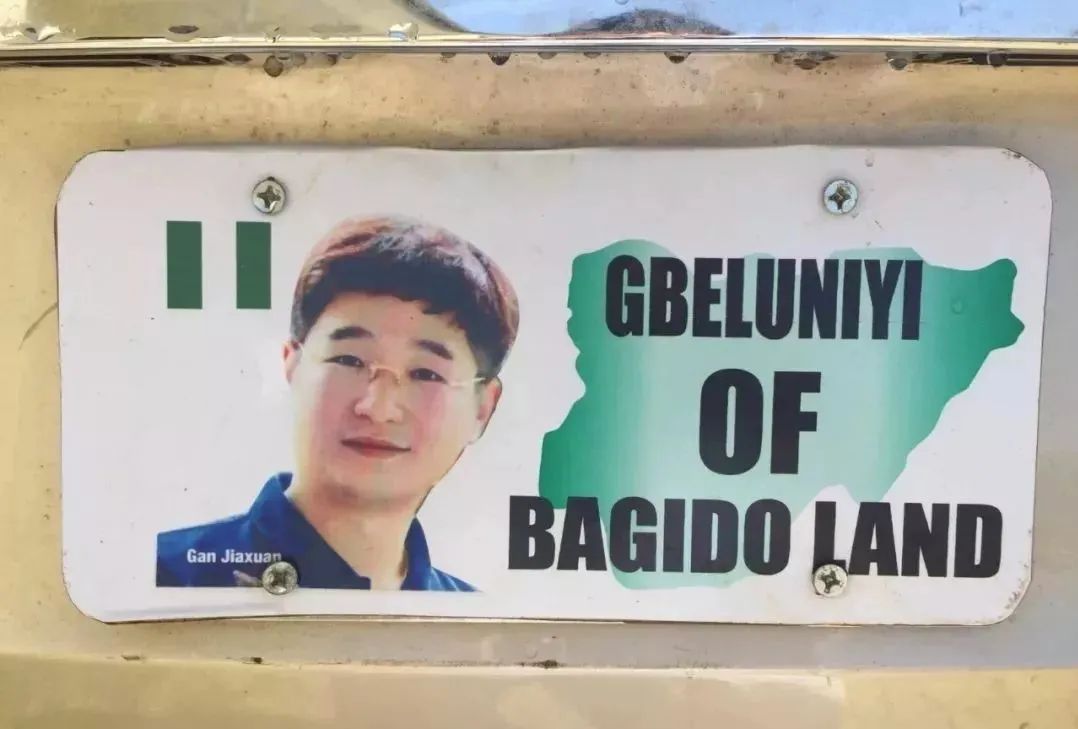 Photo credit: Wenling Daily
Also in business in Africa is Zhang Guangyu, from Zhuji, Zhejiang Province, who was named the first Chinese chieftain in Kano state, Nigeria, on April 25, 2019, and the first foreign chief of West Africa's largest ethnic Hausa ethnic group, who is hereditary.
At the coronation ceremony, local highly respected royal representatives wore headscarves, capes and gold canes to Zhang Guangyu, symbolizing the power of the sheikhs.
After the book seal, Zhang Guangyu rode on a horse began to march, the Chinese Knights, the Royal Horse Team, the police guard accompanied. Local police cars were at the fore of the swelding procession, followed by 10 knights wearing purple headscarves and riding tall horses, while Zhang Guangyu walked slowly in the crowd to receive congratulations from locals. 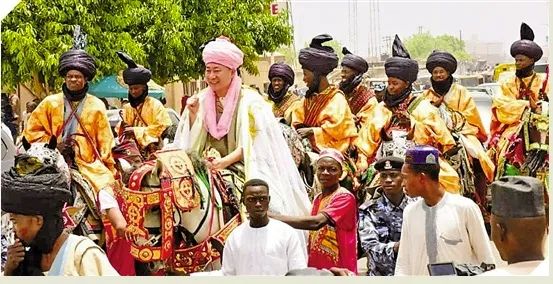 Zhang Guangyu, who has lived in Kano state, Nigeria, for more than 15 years, started out as a drinks trader and, after years of hard work, is well known in local Chinese and local circles.
Over the past few years, as the number of Chinese businessmen in Nigeria has increased, there have been business disputes between local Nigerian businessmen and Chinese businessmen. Zhang Guangyu was given the chief, and the Nigerian authorities took responsibility for managing the Chinese community, coordinating disputes between African and Chinese businessmen, and recreating the responsibilities of the old tribal chiefs. 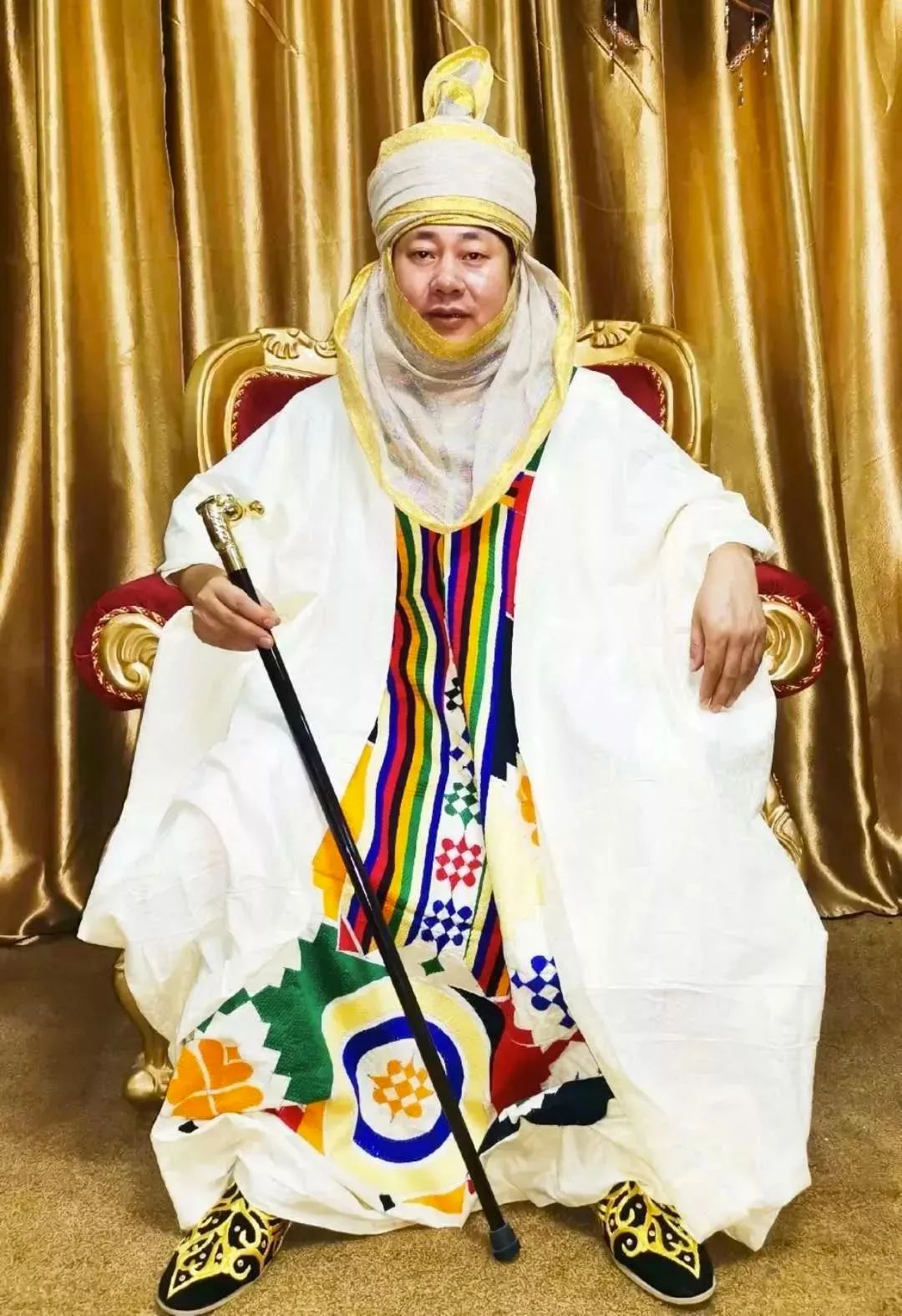 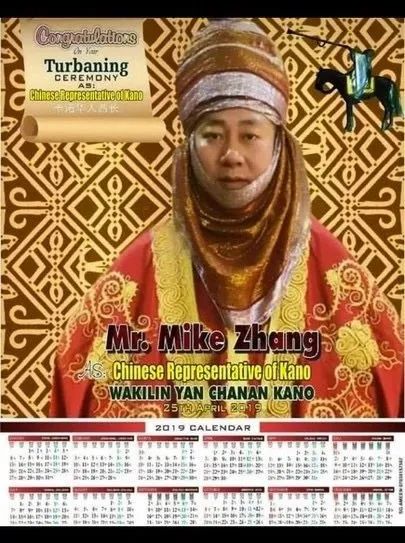 The same calendar as the chief
And Fujian Fuqing zheng Yuefeng as an African chief of the legend can be written directly this novel, called "Resection of african chiefs."
Zheng Yuefeng, who is currently vice president of the Fujian General Chamber of Commerce in Nigeria, is also the chief of the local Yoruba emperor himself. Before reaching this height of life, he was a three-in- and three-out fujian Province, Fujian Province, the judicial compulsory isolation of drug treatment center addicts. 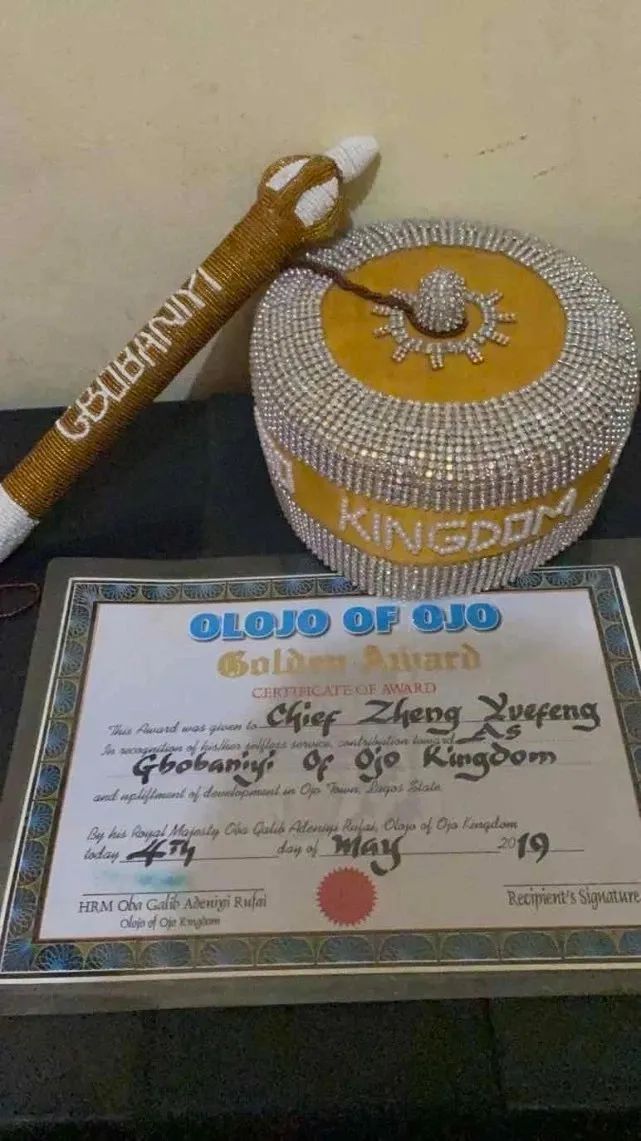 Zheng Yuefeng, who came out of rehab for the third time in 2015, set up his own gold mining company in Nigeria after several years of tossing with the help of his fellow countryman. He was called a "chief" by the local Yoroba emperor for funding the construction of local schools in Nigeria.
"It's more of an honor to me." When Zheng Yuefeng bet the chief, he didn't forget the police who helped him in the drug treatment center. After this year's outbreak, when there was a shortage of masks in the country, he immediately mobilized his resources in Nigeria to send 10,000 medical disposable masks to the rehab facilities he had been in.
Zheng Yuefeng's life has turned against the wind. 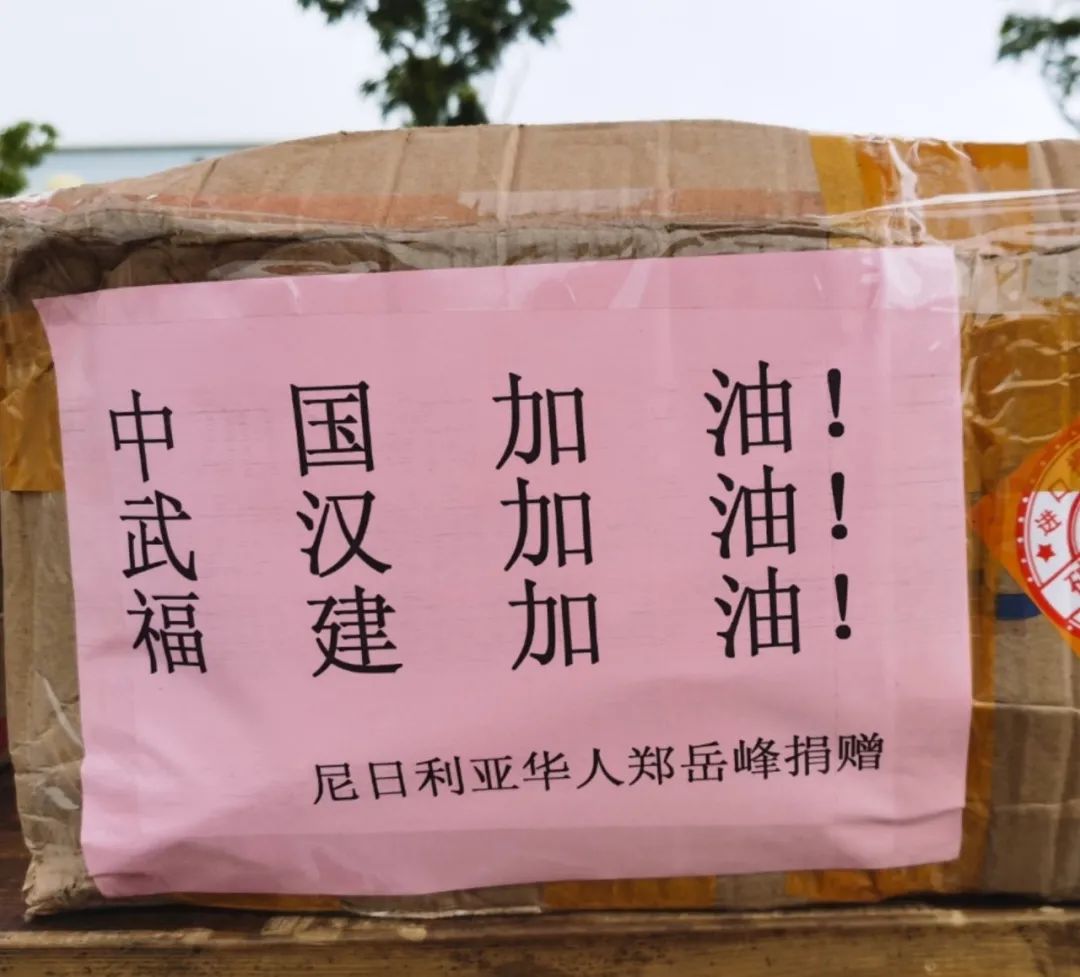 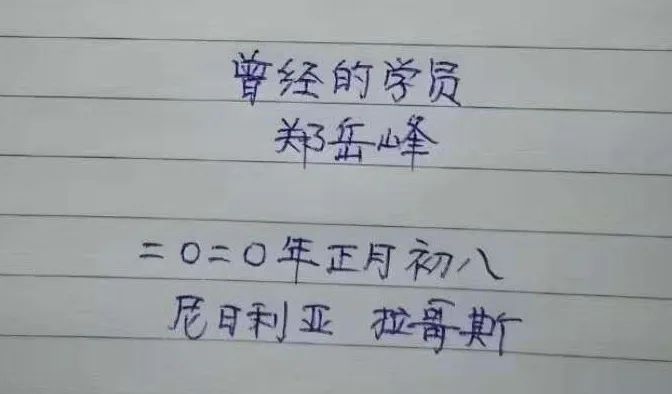 Hu Jieguo, China's first Shanghain woman to become chieftain in Africa, arrived in Africa in the second spring of his life.
After seven years as an English teacher in Shanghai, he followed his father to Nigeria in the 1960s and 1970s to do business, not following his father's arrangements to inherit the textile industry, self-advocacy into the catering industry. 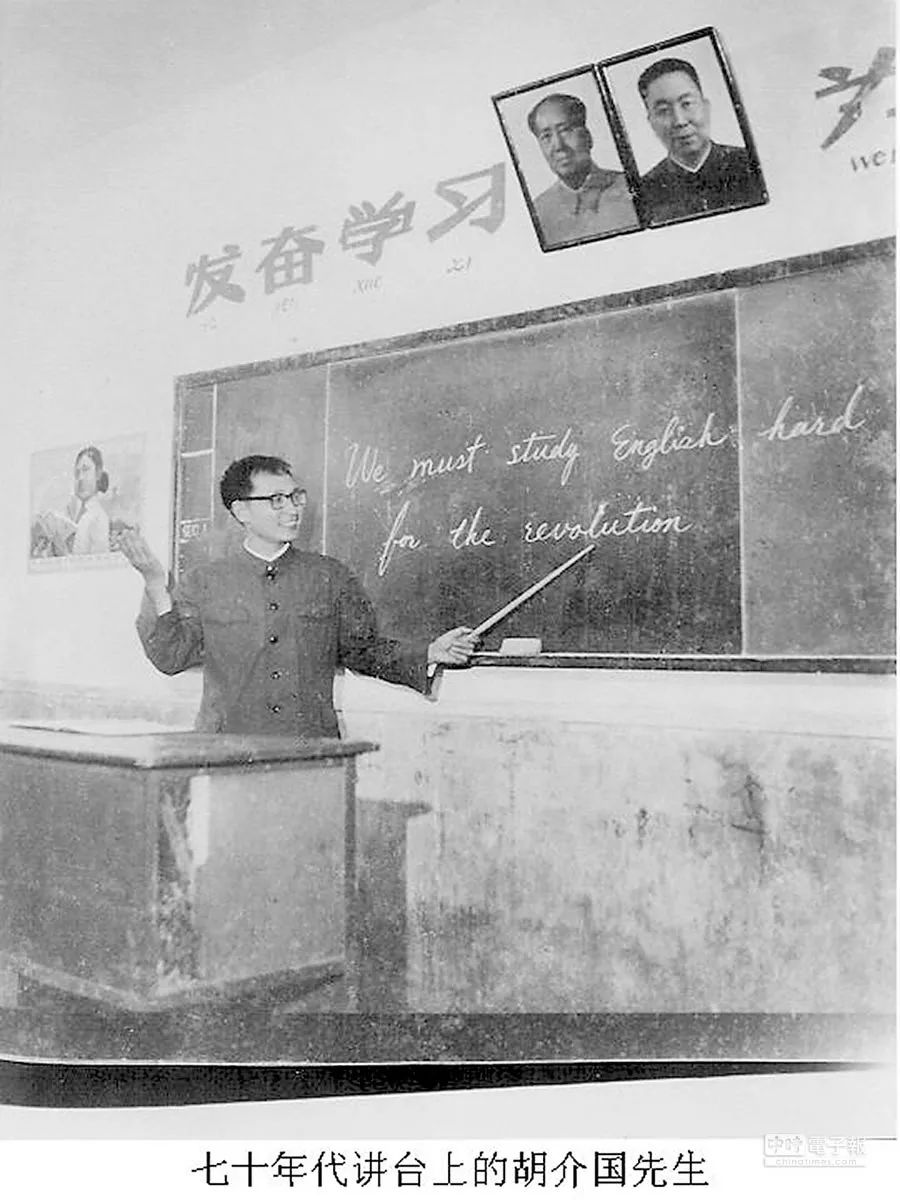 Like the doorman in the film The Grand Budapest Hotel, he went to work in Nigeria's biggest hotel at the time, took steps from the grass roots to be the general manager of the hotel, and then got the boss's appreciation, took a stake in the hotel, and saved the first bucket of gold in his life.
In 1997, he spent $8 million to build the Golden Gate Restaurant in Lagos, Nigeria's capital, the most luxurious hotel in Africa at the time. 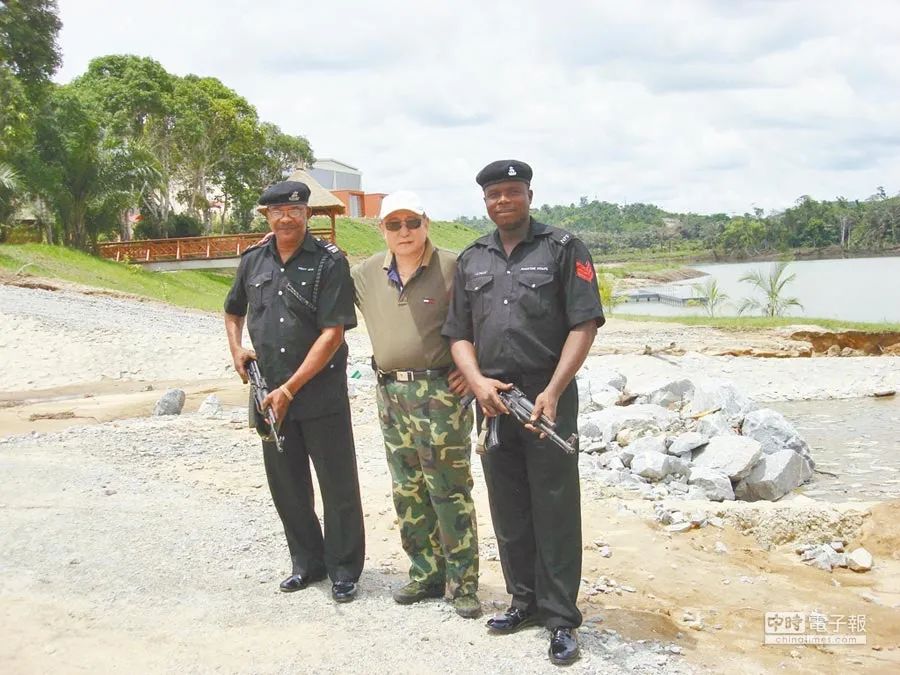 In 2001, the Emir of the Grand Chief formally appointed Hu Kaiguo as a permanent chief. After being chief, Mr. Hu had many privileges, and he had a special armed guard unit of nearly 100 men under his full command, hand-picked by Mr. Hu, but paid by the local government. He could also negotiate more rights for his countrymen as chief and in government negotiations.
In the same year, three Chinese diplomats were abducted by bandits in Nigeria, and Hu led a guard to rescue them, chasing them all the way to the border to get them back.
Under Nigerian law, Hu is the supreme leader of the sealed tribe, which is polygamous, but Hu and his wife have loved each other all their lives and have never exercised his princess-selection privileges. 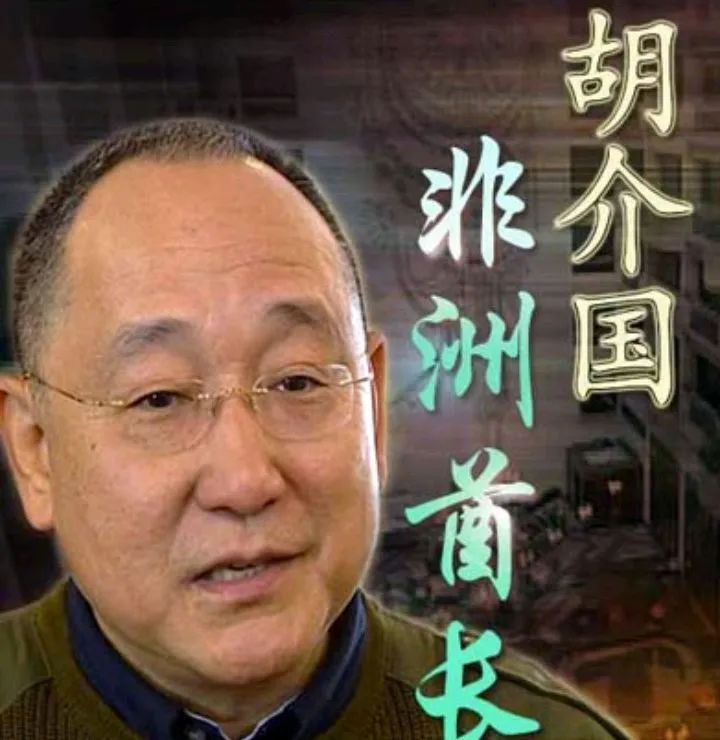 With the deepening of China-Africa cooperation, Hu Jieguo, a sheikh with a deep understanding of both cultures, began to serve as a special economic adviser to the President of Nigeria, responsible for helping the development of small and medium-sized enterprises in Nigeria, and he began to travel frequently between Asia and Africa.
Dressed, polite and fluent in Oxford English, Hu said he was the sheikh's status in Nigeria, similar to that of a British jazzman. 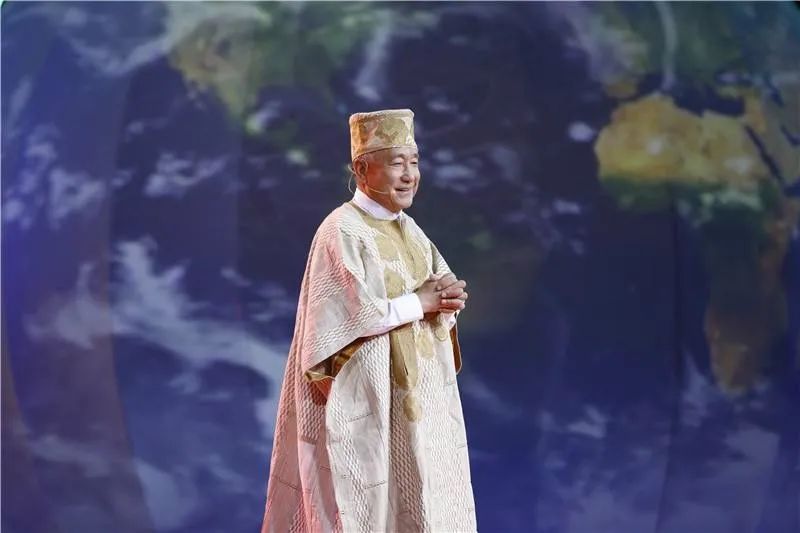 The Chinese chiefs has caused controversy in Nigeria, with some saying it is a bad tradition and others saying it is embracing the changing times.
Locals often say that today's China is tomorrow's Nigeria. Holding the sheikh's cane on Chinese is like holding the steering wheel, controlling a delicate balance at the forefront of the collision of African cultures.
This land of Africa is so magical that perhaps many years from now, when the descendants of chinese chiefs stand high and look at the land of Africa, they will remember the distant afternoon when their fathers were sealed chiefs.

Readers of this number please sweep the codeLoss-proof linking

Verify messages"Attention has been paid to the diplomatic symposium” 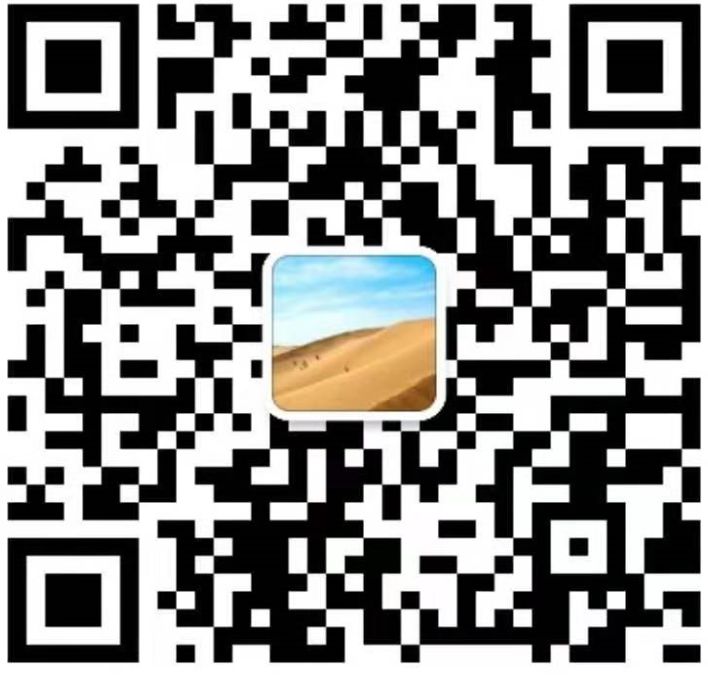 This number is not followedNo reception

This paper.Reprints have been authorized by the original platform，

This number is dedicated to providing a diverse perspective,

The content of the article does not represent the position of this official.

↓
Labels are not available during preview
Read.
Synced to have a lookWrite down your thoughts

Why can Chinese group be chiefs in Africa?
Up to 200 words, currently totalWord.