Facebook has been hit by the biggest ad boycott in history, and Zuckerberg says advertisers will soon return. China Yi Company.

More than 700 brands have pulled ads from social networking site Facebook, and the list, which includes Coca-Cola, Starbucks and Ford, is growing.

But advertisers say that for many brands that face consumers, Facebook is the lifeblood of leaving Facebook at a huge cost. Mark Zuckerberg, Facebook's chief executive, has also been overbearing internally: advertisers will soon return because of policy changes that do not result in a small amount of revenue. At the same time, Facebook's share price has fallen sharply to the point where it has risen.

Facebook, the social platform, is facing an unprecedented boycott by advertisers.

A growing number of well-known brands have joined the Stop Hate for Profit campaign, promising not to advertise to Facebook in July, and pressuring facebook to take steps to reduce hate speech.

CNBC reported that the final talks between advertisers and Facebook broke down, with more than 700 brands, including Coca-Cola, Starbucks and Unilever, ending their campaign of using Facebook's advertising service in July. [1]

Is social media a "truth arbitrator"?

A while ago, a wave of anti-racism was launched in the United States after george Floyd, a black man, was "knee-jerked" by white police officers. People have chosen to stand, have distinct views and difficulties in reaching consensus, and have been buzzing on social media, including a flood of radical and hate-mongering.

Twitter, Reddit and YouTube, which have traditionally been neutral, have restricted hate speech.Twitter was the first to tag President Trump for retweeting a "White Power" video, indicating that the tweet needed to be defact.

Reddit, the nation's largest social networking site, has also taken action against hate speech. According to the New York Times, Reddit banned the plate, known as "The_Donald," and gathered more than 790,000 supporters of President Trump, posting pictures, retweeting videos and posting messages of support for Mr. Trump. "Reddit is a place to build a sense of community and belonging, not to attack others," the newspaper quoted Steve Huffman, Reddit's chief executive, as saying the sector was a breach of that principle. [2]

In an interview with Fox News, Zuckerberg criticized Twitter CEO Jack Dorsey's approach, saying social media should not be a "truth arbitrator." "I don't think Facebook should be the arbiter of the truth for everything that people say online," Zuckerberg said. Private companies, especially platform companies, probably shouldn't do this.”[3]

In 2017, Sheryl Sandberg, Facebook's chief operating officer, expressed a similar view, telling CNBC that Facebook "doesn't want to be an arbiter of facts at all." "

Afterward, Dorsey responded to Zuckerberg by saying, "We will continue to point out the wrong election-related misinformation around the world." We will also accept and admit our mistakes. "

"This does not make us 'the arbiter of truth,'" Dorsey said. It is important to increase our transparency so that we can clearly understand the reasons behind our actions. "[4] 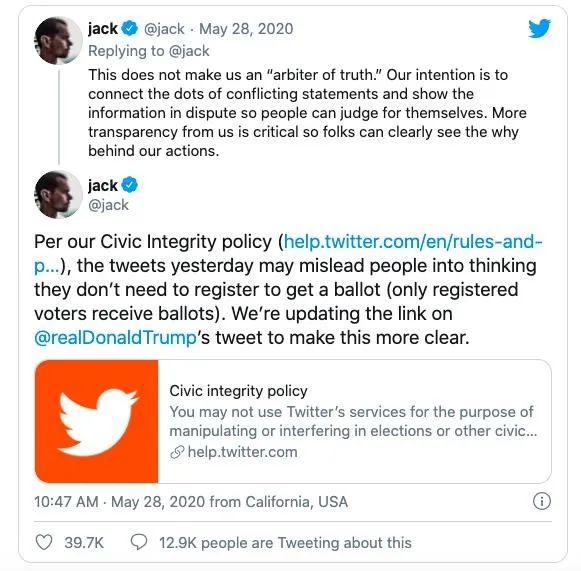 Facebook has been criticized for failing to address the controversial content on the platform, but Zuckerberg does not appear to have any plans to change the company's policies.

In this context,American civil rights groups such as the Anti-Defamation League, the NaACP and Color of Change launched the Stop Hate for Profit campaign on June 17th, accusing Facebook of inciting violent protests against racial justice and turning a blind eye to the platform's blatant suppression of voters.

The campaign called on advertisers across the country to avoid advertising on Facebook throughout July in the hope of putting pressure on Facebook to adopt stricter controls: "We send a strong message to Facebook that it is by no means a good business to trade in favor of promoting hatred, bigotry, racism, antisemitism and violence." "[5]

NChairman of the AACP.Derrick JohnsonSaid.Facebook has been reluctant to remove political propaganda from the platform, which is no longer a miss for the platform and CEO Zuckerberg. He accused Facebook of being "smug about the spread of false information". [6]

Instead of responding directly to the campaign, Zuckerberg stressed that Facebook will work to advance racial equality and justice in the United States and is prepared to invest more than $20 billion to support black businesses, organizations and develop products that promote racial justice.

A Facebook spokesman said on June 30 that he confirmed that Zuckerberg would meet with resistance organizers and that "we are waiting for a response and look forward to the opportunity to continue the conversation." "

Dependence or resistance? Advertisers have a dilemma.

Earlier, Facebook executives met with advertisers at least two rounds to try to block a month-long ad boycott. The executives include Carolyn Everson, the company's vice president of global business solutions, and Neil Potts, the company's director of public policy.

Reuters, citing anonymous sources, said executives at the meeting had not proposed new concrete moves to deal with hate speech: they had been repeating their rhetoric, and the measures proposed in recent announcements had disappointed advertisers who thought the plans had only touched the fur. "There's no progress at all, " said an executive at a large advertising agency about the meeting.

Facebook said it would be audited for its hate speech controls and modeled on other social platforms, such as Twitter, in a plan to flag content that might violate platform policy but have news value.A digital advertising representative who participated in the conference call said Facebook executives had repeatedly referred to the audit but offered no additional concessions.

Executives at a major advertiser say the boycott is a test for advertisers of how they can reach billions of consumers without relying on the world's largest social platform.

Some companies are less dependent on Facebook, often not directly to consumers, but only use advertising to promote product image. Multinationals have been involved in the boycott, and executives say they will demonstrate that they can achieve the same advertising results without Facebook.

CNBC reported thatSome advertisers rely heavily on Facebook, but also want to join the recent ad boycott, which is in a dilemma: if they join, short-term business may suffer;

Meanwhile, Facebook's share price has fallen. After falling 3.39 per cent on June 25, it fell another 8.32 per cent on June 26th, its biggest drop in three months. According to Bloomberg.Billionaires are.Facebook lost $56 billion in market value and Zuckerberg's net worth lost $7 billion.

Someone.Questions began to be raised as to why some companies had been slow to join. Others say that advertisers are participating in the boycott, but are simply trying to find an excuse to fully reduce marketing spending for the new crown outbreak.

Brendan Gahan, a partner at advertising agency Mekanism, says that even if some companies participate in boycotts, they do consider reducing costs during the outbreak, but that is not the main motivation. "It's a brave move, and the brand's short-term profits are likely to be badly damaged." "A lot of businesses want to be on the right side, they don't want to make quick money simply, " says Mr. Garner. "

"There are a lot of brands that target consumers, and Facebook is often the lifeblood of the entire sales channel." "The world's top 500 companies are likely to focus more on visibility, and they are shifting advertising money without significantly impacting profits," Garner added. But for companies that face consumers head-on, it's the equivalent of removing products from Wal-Mart. "[8]

CNBC quoted marketing expert Mari Smith as saying that if a company suffers a business loss as a result of leaving Facebook, it can try to invest half of its original marketing budget and invest in other channels, such as email lists or Twitter ads.

By the time of writing, more than 700 companies, including Coca-Cola, Pfizer, Ford, Starbucks and Verizon, had withdrawn their ads. But the Wall Street Journal argues that this will not have a lasting, substantial impact on Facebook's growth. [9]

Based on data from market research firm Pathmatics, a CNN analysis found that most of Facebook's top 100 advertisers, such as Wal-Mart, American Express and Home Depot, did not join the boycott.

Of the top 25 customers in Facebook's advertising revenue in 2019, only Microsoft, Starbucks and Pfizer have pledged to stop marketing on facebook platforms. The 25 advertisers spent about $2 billion, or about 3 percent of Facebook's revenue in 2019. 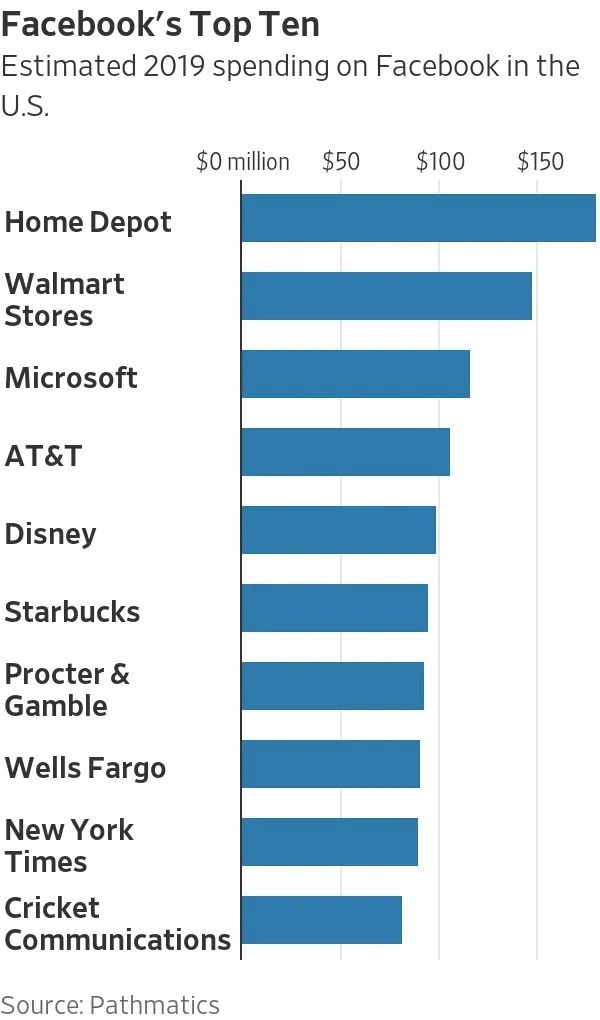 Home Depot is Facebook's biggest advertiser in 2019, with $178.5 million in advertising. The company told CNN it would "closely monitor" Facebook's follow-up.

CNN said the boycott had a limited impact on Facebook's earnings results, as the top 100 advertisers contributed only 6 percent of the social media giant's ad revenue. Facebook's nearly $70 billion in advertising revenue in 2019 came mainly from small and medium-sized businesses, according to the results.

Wall Street investors believe Facebook's current predicament can be referred to the problems YouTube once faced: Advertisers complain about extremism and other offensive content on the site, but they quietly returned soon after, Barron reported.

"We're not going to change policy or take any action because it threatens a small portion of revenue," Zuckerberg said at a recent public employee-only communications meeting, Reuters reported. He added, "All advertisers will be back soon." "[10]

It's okay to be boycotted by more than 240 advertisers?Wall Street is still bullish on Facebook's future, Eastern Fortune Express.

In 2020, the second China Yi company project was officially launched. 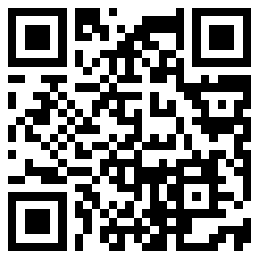 Participate in the registration process.

Fill in the enterprise information and participate in the project.

Recommended in the past.

Facebook has been hit by the biggest ad boycott in history, and Zuckerberg says advertisers will soon return. China Yi Company.
Up to 200 words, currently total.Word.