Google's web advertising system is a huge machine that automatically makes money for its owners. The site applies to join the Google Ad Alliance and adds display and pop-up ads to the page. Google's system automatically fills those ad positions with advertising content and generates about 30% of its revenue.

Tencent Technology News In the first half of 2020, the world is flooded with new crown virus conspiracy theories and rumors, such as "5G gave birth to the new crown virus." According to foreign media reports, Google Inc. has taken positive action against new crown rumors, removing new crown viral conspiracy theories from its news service and YouTube, while various social media companies around the world have come under intense scrutiny for spreading new crown virus rumors. Google has begun labeling misleading videos aimed at U.S. audiences and has partnered with other internet companies to crack down on what the World Health Organization calls a "rumour epidemic."

But Google is also reportedly running ads on websites that publish conspiracy theories to help site owners generate revenue and continue to operate. In at least one case, a conspiracy theory "master" appeared in a Google ad that had been blocked by Google in the past.

In one bizarre case of advertising, advertiser Veeam is an independent Microsoft 365 backup service provider. A post on the company's advertising website incorrectly claimed that Microsoft co-founder Bill Gates's charity projects in the new crown and vaccines were part of a conspiracy to rule the world.

Another ad about Microsoft's video conferencing tool, Teams Software, appeared on a French-language article page. The article accuses Gates of trying to bribe Nigerian lawmakers to vote for a new vaccine.

Separately, an ad from O2, a European telecoms operator, appeared in another article linking the new crown virus to a 5G communications network, a common conspiracy theory in the new crown outbreak.

All of these ads are delivered through Google's automated system, which intelligently matches advertisers and advertising pages or websites, improving the efficiency of advertising and click-through rates.

A recent survey of 49 websites, called the Global False Information Index, published unfounded rumors or conspiracy theories about the New Crown virus, including about Gates and the 5G network. According to the agency, Google advertises on 84 percent of its sites, and it contributes the vast majority of its $135,000 in monthly revenue. 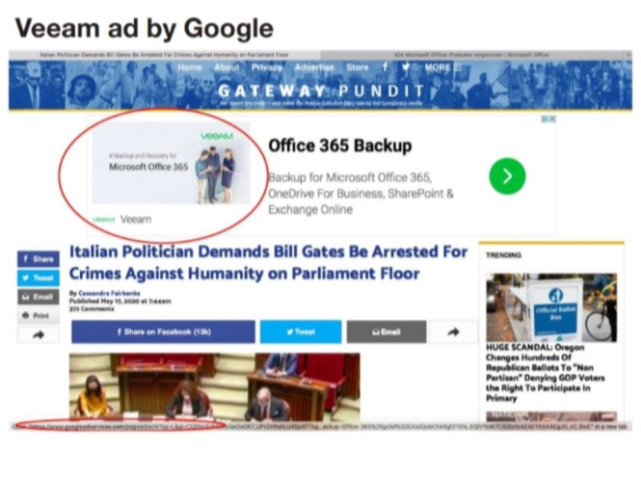 Google has faced criticism in the past for funding ultra-partisan media sites such as Breitbart News. The company avoids a blanket policy on which media sites can display online ads, simply removing ads on specific pages that violate their content policies. Google also allows advertisers to blacklist specific websites. Google has been particularly reluctant to take politically influential action, given that the Trump administration is taking concrete action to punish Internet companies that have cracked down on conservative views.

None of the pages tagged by the Global Fake Information Index violated its policies, said Christa Muldoon, a Google spokeswoman. "We are committed to improving the content quality of Google products, including protecting our users from medical errors. Whenever we find that a publisher is violating our policies, we take immediate action. She said.

Google's web advertising system is a huge machine that automatically makes money for its owners. The site applies to join the Google Ad Alliance and adds display and pop-up ads to the page. Google's system automatically fills those ad positions with advertising content and generates about 30% of its revenue.

While Google has some control over its brand advertisers, self-service systems sometimes run brand ads on websites that advertisers don't want to associate with.

According to the Global Disinformation Index, Google's system sits recently on sites such as startpost.com, thegatewaypundit.com and thewashingtonstandard.com, which regularly publish conspiracy theories.

Another company that advertises on these conspiracy theory sites is Criteo, and when contacted by media reporters about one of the ads mentioned in the report, Luca Sesti, a spokesman for the company, said the company was severing its business ties with the troubled website thegatewaypundit.com.

"If we find that our partners do not comply with our policies, we will terminate the relationship immediately," he said. "We recognize that the dissemination of inaccurate information through fake news is a very real problem on the Internet."

The researchers found that some of the online ads and web articles matched strangely, such as the telco O2's ad and a rumored article promoting 5G wireless technology that caused symptoms of the new crown virus, which claimed that 5G communications technology "poisons people's cells."

"This is a big problem that Google needs to address right now," said Craig Feigen, program director at the Global Disinformation Index. "This creates an economic incentive for these sites to continue to promote conspiracy theories. You go to these sites and there are ads and pop-ups everywhere. These ads are designed to get clicks and monetize each reader's traffic. "

In one case, Google advertised ads and obtained commissions for a website that was promoting a conspiracy theorist, and Google's system was doing everything it could to block the "master of disinformation."

In early May, Google's video site YouTube deleted the account of David Icke, a google-owned video site who regularly ranted that "Rothschild Zionists" controlled global institutions and questioned the efficacy of vaccines, according to foreign media reports. In a recent interview about the new crown virus, he said 5G communications can make people sick and send emotional signals. For the 14 years before he was banned, Ike had been posting conspiracy theories videos on YouTube.

Guillaume Chaslot, a former Google engineer and founder of algo Transparency, estimates that Ike's YouTube channel added 200,000 followers in March and April this year, and the disinformation guru spends most of his time peddling unproven viral theories.

Chasloe's research tracks how often YouTube recommends video viewers to direct to specific videos and channels. Over a 10-year period, YouTube has made 1 billion videos of Ike's conspiracy theories.

YouTube has removed Ike's account, which violated the new Crown Virus RumorS Rule. Since then, Ike has appeared on other YouTube channels and youTube ads for Gaia, a video site that promotes yoga and alternative therapies.

"We have to break this emotional cage," Ike said in an ad a few weeks after the YouTube ban was released. Gaia's video platform plays several video shows produced by Ike. In a recent earnings analyst conference call, Gaia executives said YouTube had become a "very important" way to get new users.

Imran Ahmed, chief executive of the UK-based non-profit anti-digital hate centre, believes social media platforms should be wiped out. "In the new crown pandemic, lies will cost people their lives," Ahmed said. The misguided people put us all at risk through their reckless behavior. His team estimates that Ike earned about $177,000 a year from YouTube ads before the ban was implemented.

A spokesman for Ike's video service, Ickonic, said the estimate of video advertising revenue was inaccurate because YouTube had been restricting ads for controversial videos for years. "Revenue is nothing, it's been a while," the spokesman said. So this income figure is just a fiction. "

Google spokesman Mark Marden said Ike and other blocked sites are allowed to appear on other accounts and ads, provided the videos do not violate the rules.

As internet giants like Google deal with user-generated conspiracy theory content, they also need to reform their advertising systems to deal with growing problems. In October 2018, Google and Facebook signed an EU code of conduct for disinformation that included a commitment to "improve censorship of advertising to reduce the revenue of disinformation providers." "

However, according to Craig Feigen, programme director of the Global Disinformation Index, the problem remains a blind spot for these companies. Some conspiracy sites attract a large number of visitors to promote their content through social media platforms.

Feigen said the 49 websites reviewed by the Global Disinformation Index promoting the new Crown virus conspiracy are just a small sample and are just the "tip of the iceberg" for a large number of conspiracy theory sites. Last year, the Global Disinformation Index published a study of about 20,000 fake and conspiracy theory sites around the world. The sites are estimated to generate $235 million in advertising revenue each year, of which about $86.7 million is paid for by Google. (Tencent Technology Review/Cheng Cheng)